The expression of pigment is controlled by six main genes in the body, and this genetic makeup is largely determined by your parents and the generations that came before them. That’s how natural selection works.

Our world is a wonderfully diverse and beautiful place, with millions of species of animals and plants, capped off by the most dominant species—human beings. We consider the human race spread across the globe as members of a single species, Homo sapiens, but we certainly don’t all look the same. From language, culture and clothing to height, face shape, and hair color, human beings have many things that make us unique from one another.

However, if we all belong to the same species, shouldn’t our basic skin color be the same? Why are some people fair and others dark?

Our skin color is determined by a pigment called melanin, and while everyone has melanin (both fair and dark-skinned people), it comes in different forms and ratios. The two forms of melanin are called eumelanin and pheomelanin. Eumelanin comes in primarily brown and black hues, while pheomelanin appears as red and yellow hues. It is produced by a specialized group of cells called melanocytes. 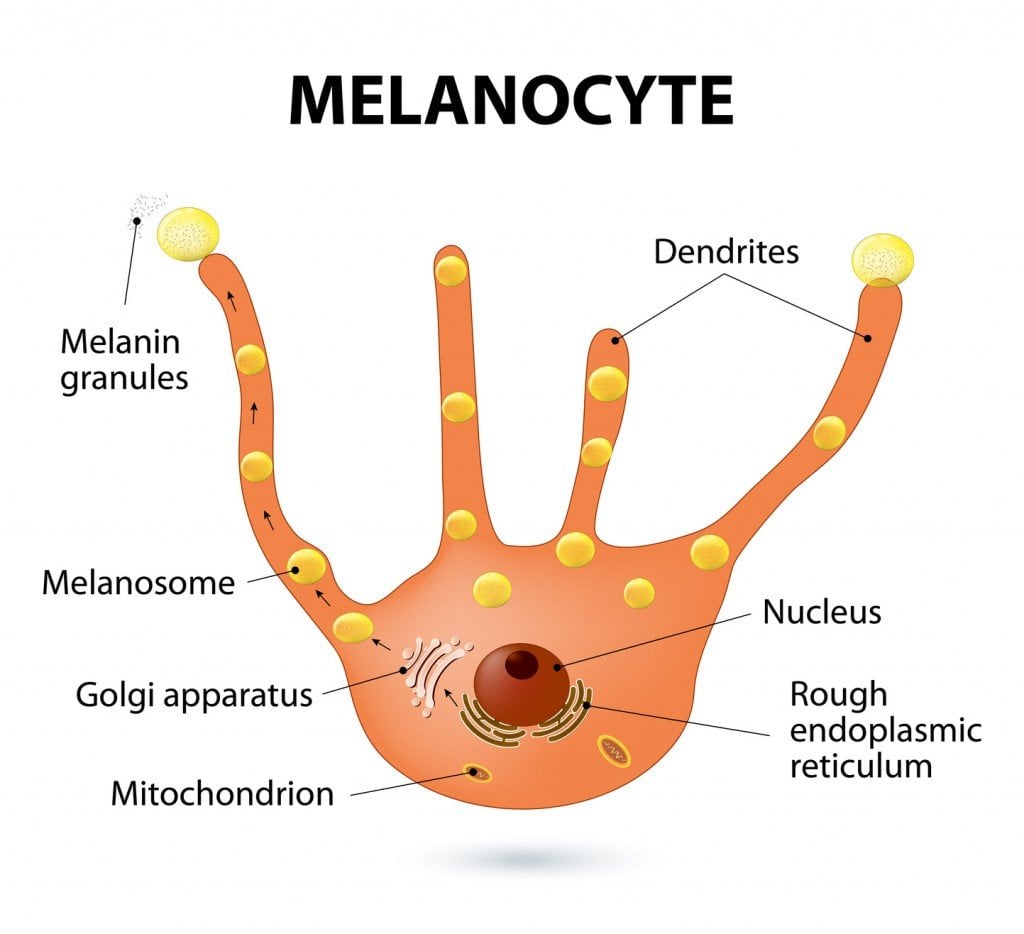 How Does Melanin Affect Skin Color?

Before we can find out why we have different skin colors, we must first understand the basic science behind our skin. First of all, there is no such thing as “black”, “white”, “red” or “yellow” in terms of skin color. There are simply mixtures of colors and variations, depending on your genetic makeup.

For example, someone with very dark skin would primarily produce eumelanin, while pale-skinned Europeans might produce a majority of pheomelanin. Perhaps most importantly, the amount of melanin is also a factor in determining skin color. 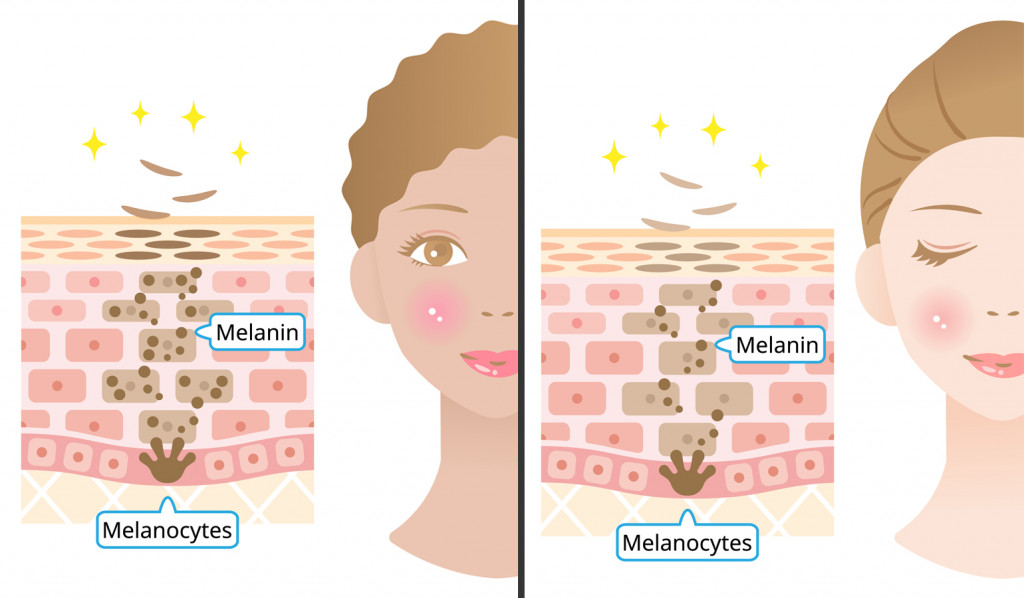 Melanin is produced in specialized cells called melanocytes, but these do not behave in the same way for all people. Some people naturally produce less melanin, which means less pigment and lighter skin. Other people possess fewer melanocytes than normal, which also results in less overall pigment and lighter skin. Clumps of melanocytes in fair-skinned people often appear as freckles. People can temporarily change the color of their skin by tanning (or getting sunburnt), which essentially stimulates the production of melanin and inflames the area to protect against adverse UV exposure.

Why Are There Different Skin Colors?

To answer that question, we need to turn back the clock about 1.2 million years or so, when “humans” as we know them began losing their fur and walking erect. The leading hypothesis at present is that humans started losing hair and moved to more open plains, causing their skin to come in direct contact with the sun. 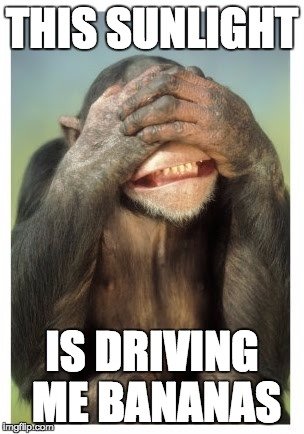 In the heart of sub-Saharan Africa, where it is believed that all humans originally came from, the sun is incredibly intense. For early humans living near the Equator, they were getting pounded by sunlight and radiation all year long, and excessive UV radiation can be very harmful to our body. This is something upon which we can all agree.

However, the core reason for the development of dark skin is contentious. One hypothesis is that strong UV exposure results in cell mutation, increasing the risk of cancer. Conveniently enough, melanin functions as a shield against ultraviolet radiation, thus protecting the cells from the many dangers of excess exposure. However, skin cancer doesn’t happen that often and early enough to have an effect on natural selection, so this hypothesis has fallen out of favor.

The current leading hypothesis is the protection of important vitamins from the sun. Folate, commonly known as vitamin B, is highly sensitive to light. Folate is crucial for many functions of our body and UVR rays can degrade it. Without folate, children could die of vitamin B deficiency.

For this reason, we see darker-skinned people most commonly near the Equator, where sunlight is in abundance throughout the year; this extends beyond Africa to Asia, South America, and the Middle East! Interestingly enough, it wasn’t until less than 100,000 years ago that skin color began to change. Humans were dark-skinned for the vast majority of their history. However, as human beings began spreading throughout the globe into Europe, northern Asia, and eventually the Americas, they discovered areas with decidedly less sunshine. This is where the second stumble in the human history of skin color arose—vitamin deficiency.

The Need For Vitamin D

One of the key vitamins for human health is vitamin D, which helps the body absorb calcium and other minerals that are essential for bone growth and repair. Unfortunately, our primary source of vitamin D is linked to sunshine; the radiation actually helps to synthesize vitamin D in the skin, in conjunction with another chemical. Thus, for people living in colder climates, or areas that experience darkness for extended periods of time throughout the year, having dark skin meant blocking that radiation, which meant a low level of vitamin D production. 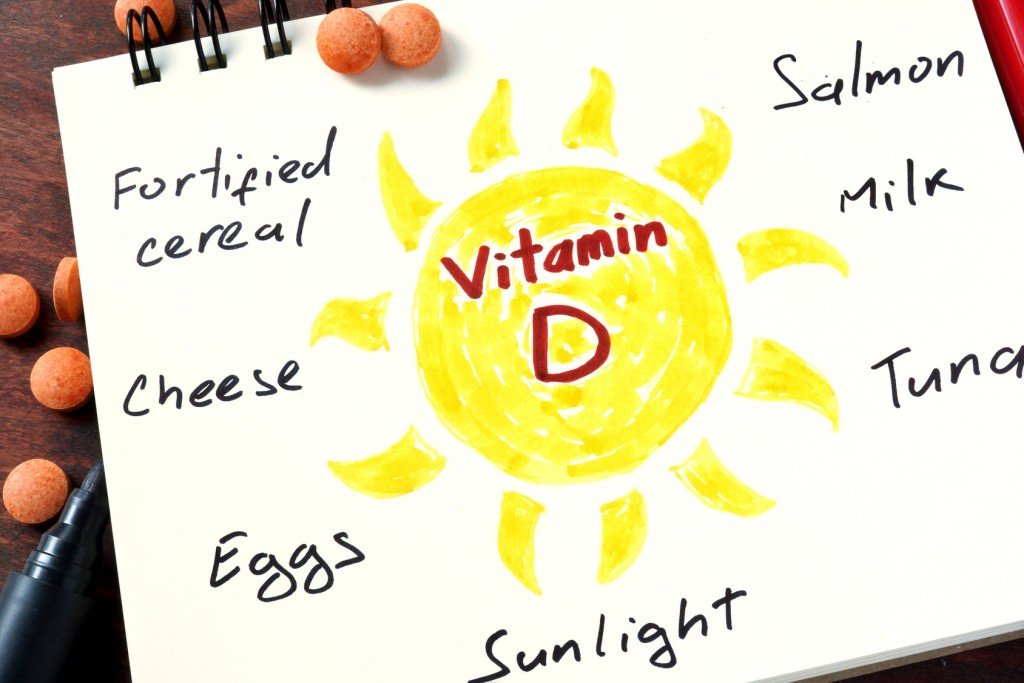 Reverse adaptation occurred as humanity sprawled across the planet into different climes, and eventually, their skin color faded over the course of many generations. In northern Europe or Scandinavia, where sunlight is limited for many parts of the year, people’s skin is extremely pale, almost translucent, to ensure that when they are exposed to that precious sunlight, their skin is able to make enough vitamin D to keep the body healthy!

The Genetic Side Of Things

The expression of pigment is controlled by six main genes in the body, a genetic makeup that is largely determined by your parents and the generations that came before them. That’s how natural selection works; as small blips, errors, additions, and mutations to genetic structure occur, we see genetic anomalies in terms of skin color expression, etc. When those anomalies result in higher survivability, they are passed on to one’s children. The majority of genes that control pigmentation have now been identified, and we can trace the progression of skin color across the world—and throughout history!

For example, the melanocortin 1 receptor gene is what determines whether the body produces eumelanin and pheomelanin at all, and by comparing the genetics of chimpanzees and early humans, we see that this particular gene was positively selected in a major way once apes lost their fur. Similarly, the KIT ligand gene and Agouti signaling peptide gene control eumelanin production, and were positively selected in populations that moved out of Africa, to areas where less eumelanin (brown and black pigment) was needed.

Also Read: How Do You Get The Color Of Your Eyes?

In 2015, research compared the DNA from 8,000-year-old Europeans to current Europeans and found results that show a very different story. They found that in Southern Europe, Europeans had dark skin. It seems that this group intermingled with a group of farmers from the Near East who had genes for white skin. Ancient populations in Sweden around the same time, the researchers found, already had genes for pale skin and blue eyes. It has only been in the last 5,000 years that the genes for fair skin have swept through Europe.

The important thing to remember about skin color is this—every human on this planet shares a common ancestor from about 200,000 years ago in the heart of Africa, and they definitely had dark skin. If we want to make a better world, we need to focus on what unites us, not what makes us different. After all, skin color really is only skin deep! 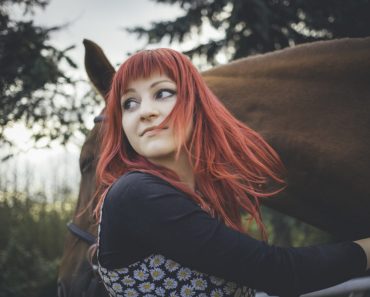