The climate change that we face today is the effect of the rising concentration of carbon dioxide. The primary source of carbon dioxide is the burning of fossil fuels. Scientists have observed several long-term changes in weather patterns since the mid-late 19th century. 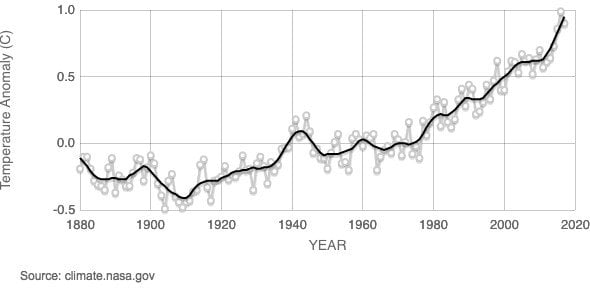 NASA brings out a scientific visualization of the time series data on different weather variables. The following video shows a five-year variation of global surface temperatures

The rise in global temperature is changing several other weather patterns. The increase in temperatures is causing warming of oceans, melting of ice mass and an increase in evaporation. These effects are having several physical impacts such as sea level rise and increased variability in weather patterns and extreme weather events. The adverse impact of these physical changes due to global warming is now becoming visible on the biological system and human systems. The higher temperature is causing seawater to expand resulting in sea level rise. It is also causing several harmful impacts on the marine ecosystem.

What is causing climate change? The most significant greenhouse gas is carbon dioxide. Other greenhouse gases are methane, nitrous oxide, fluorinated gases – hydrofluorocarbons, perfluorocarbons, etc. The effect of these gases on climate change depends on the amount of gas and their global warming potential. The global warming potential (GWP) is calculated to reflect how long a gas remains in the atmosphere, on average, and how strongly it absorbs energy. Gases with a higher GWP absorb more heat and thus contribute more to warming Earth. The concentration of carbon dioxide is higher than any other gas and is the major contributor to the warming of the planet.

Natural causes and human activities both emit greenhouse gases. There is a scientific consensus that human-induced greenhouse gas emissions have caused the observed temperature anomaly. The increase in economic activities since the industrial revolution has resulted in increasing amounts of carbon dioxide emissions. These emissions are higher than the amount that can be captured by the earth’s natural carbon cycle. The primary source of human-induced greenhouse gas emissions is the burning of fossil fuels, agriculture, and change in land use patterns.

To summarise, the changes in weather patterns that persist over a decade or more are defined as climate change. The rising concentration of carbon dioxide in the atmosphere is causing an increase in the average temperature of Earth’s surface. This phenomenon is also known as global warming. Global warming is disturbing the natural cycles and causing several long-term changes in local and global climate. The primary source of carbon dioxide emission is the burning of fossil fuels for various economic activities. The other causes of climate change include agriculture and changes in land use patterns.