Snails and other molluscs create shells through a process called biomineralization. Through a shell gland, they secrete an organic matrix of proteins, carbohydrates and lipids that serves as a base for the hard mineral part of the shell. The mineral of the shell is made from calcium carbonate.

Snails come in all shapes, sizes and shells. From the middle-sized garden snail with a pale beige shell to the racy red, yellow and black stripes on the very rare red racer nerite snail, a snail’s shell is no mere body part.

There are snails with shells that look like candy, such as the candy cane snail, and shells that could tell you the time, like that of the clear sundial snail! In 2010, scientists even found a microscopic, ghostly snail, Zospeum tholussum, with a transparent shell, that haunts the darkness of the Lukinajama-Trojama cave system in Croatia.

Considering this snail doesn’t have a common name, I’ll go the distance and christen it the ‘If-Casper-the-friendly-ghost-was-an-introvert-and-decided-to-spend-his-forever-in-some-caves-in-Croatia-being-slow-and-lazy Snail’. Catchy, right?

Ridiculous common names aside, with such dazzling diversity, it’s only natural to ask how snails make their shells… and also, what do they need it for?

Considering that snails can’t talk, we’ll just go ahead and answer that for you.

What Is A Snail’s Shell Made Of?

Snails are gastropods that are part of the Phylum Mollusca. Many molluscans, with almost 100,000 living mollusc species, are characterized for having shells. Along with snails, some other famous shelled molluscans are oysters, clams, the nautilus, and the ‘living fossil’ chiton. Some non-shelled molluscs are slugs (basically a bigger, shell-less version of the snail), octopuses and squids. 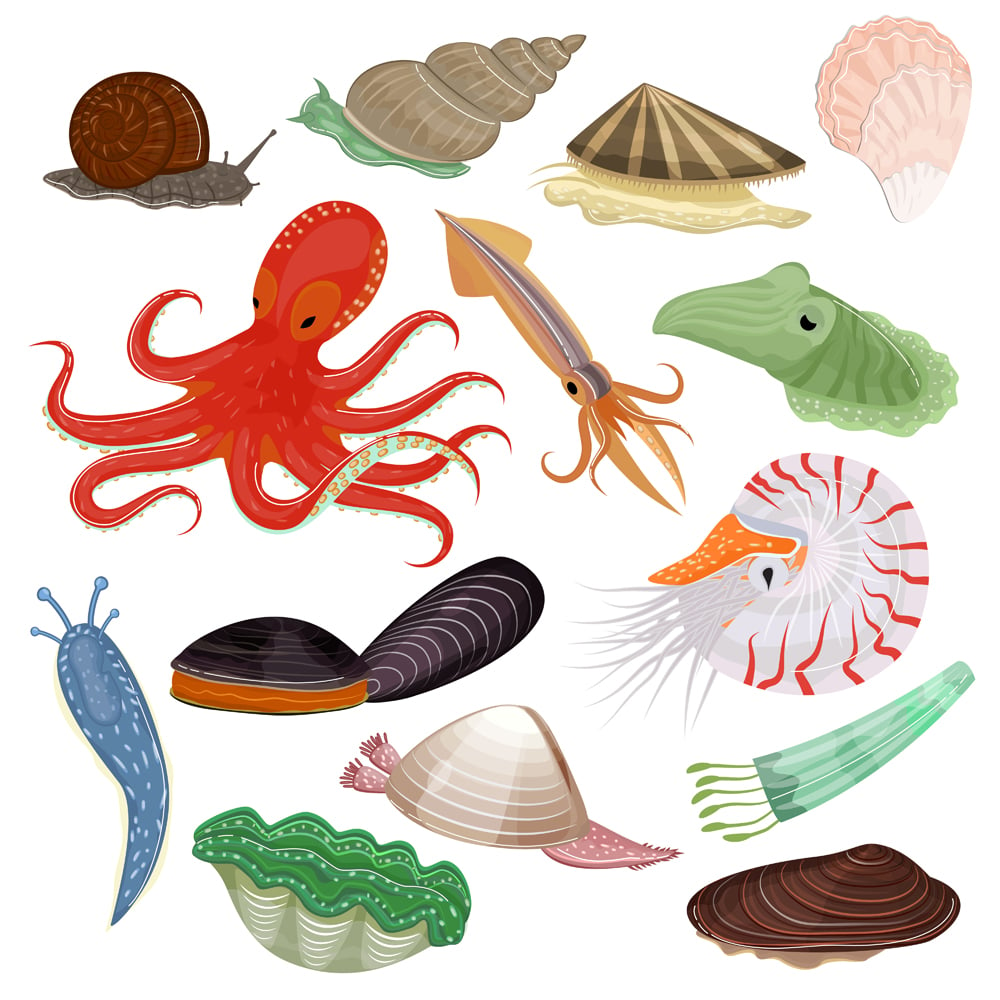 Molluscan shells are made of a lattice of different minerals and organic molecules.

The molluscan shell can have a mineral content anywhere between 95 and 99% per weight. The remaining 1 to 5% is organic matter. This essentially makes the shells biologically made rocks!

Of that 95 to 99%, calcium carbonate is the primary mineral.

Walking on the beach, the average sea shells you might pick up are calcium carbonate. Put those shells in vinegar and you can watch them dissolve in an effervescent display (try this at home!).

This calcium carbonate comes in two varieties—calcite and aragonite. The difference between these two is stability. Calcite is the stable form of calcium carbonate, while aragonite is metastable, which means that it is stable under normal conditions, but can convert to the more stable calcite form.

Interwoven between the minerals is protein. That protein gives strength, flexibility, and the lightweight quality of the shell. After all, snails can’t lug around heavy rocks on their back!

An organic layer covers the hard mineral shell. Called the periostracum, it is composed of proteins, carbohydrates, and lipids (fats). This organic layer is said to protect the minerals of the shell from dissolving in water, especially under acidic conditions.

This layer is also where snails deposit their pigments. Pigments help the snails make patterns that might signal predators, “Hey, do you see this bright red color? This means I’m definite not tasty. Do NOT eat me.” The pigments are sometimes an indication of the snail’s diet.

How Do Snails (And Other Molluscs) Make Their Shells?

Making the shell begins before the snail is fully grown, while it is still developing in its tiny larval stage. 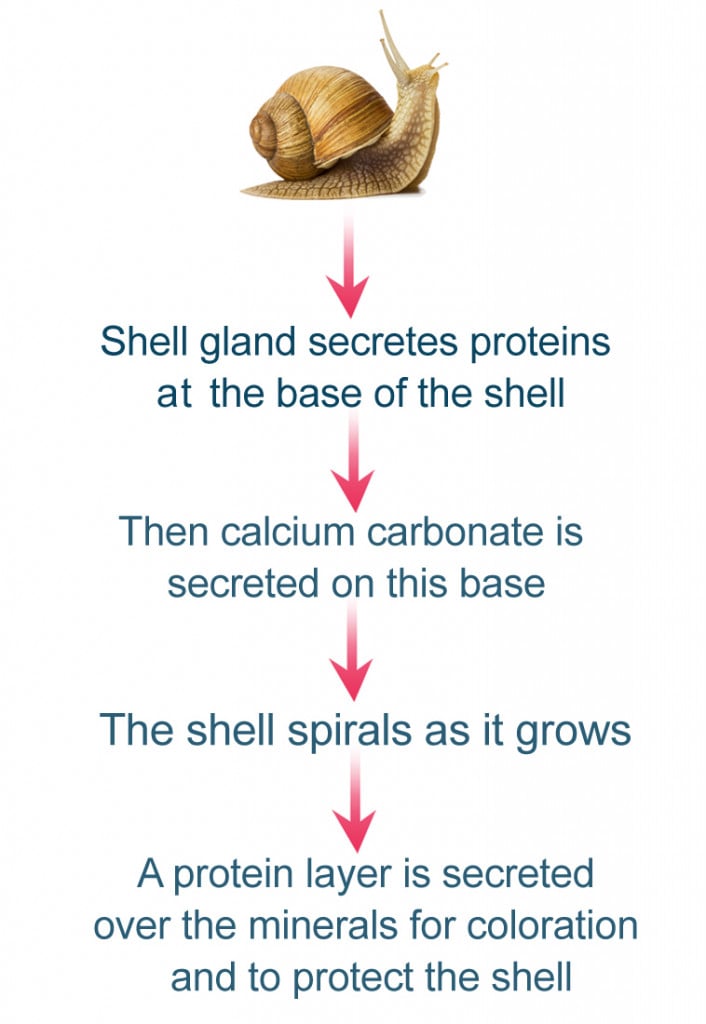 Process begins with the shell gland, a small invagination from which the ingredients to make the shell are secreted and structured. The gland is located in the mantle—a hard region where all their organs are located.

First, an organic molecule layer is secreted, which will become the future periostracum. This layer becomes the base upon which the snails can perform biomineralization.

Biomineralization is nothing but life (the bio part of the word) using minerals like calcium to make things like shells or the structure of corals. The suffix -zation indicates that it’s a process.

The minerals are deposited on the organic matrix and slowly built upon. Some molluscs deposit aragonite on the inside of their shell, while the outside is composed of calcite. Some of the molluscs that do this have a holographic pearly shimmer. This inner part is called nacre or ‘mother of pearl’. The sheen comes from the crystal structure of aragonite, which forms flat plates.

As the snail continues to grow, the shells begins to spiral around, creating the dome where they will reside. This spiraling can happen in two different directions – right-handed spiraling or left-handed spiraling. Some species can only spiral their shelling in one direction, which can help researchers identify the animal.

The shell will continue to grow along with the snail (or mollusc).

Each species of molluscs, including the wide variety of snails, have a slightly different approach to creating their shells. According to their habitats, land vs. water or freshwater vs. seawater, the animals can adapt their shells and their compositions (some molluscs are even known to use heavy metals to replace calcium in their shells!).

In other words, shells are definitely not a one-size-fits-all adaptation.

Where Do Animals Get The Ingredients To Make Their Shells?

Molluscs absorb the essential ingredients from the water and food they eat.

Minerals like calcium are largely sourced from the water around them. For marine molluscs, there is a carbonate and bicarbonate supply that they can drink in.

For land snails, the calcium comes from the water in the soil. Land snails prefer wet and humid conditions, which is probably why you’ll encounter an abundance of snails during the rainier months of the year.

The carbon and hydrogen required come from the water and the food the snails munch on. They convert these elements into the required compounds and voila! they can begin shell construction.

Since the dawn of civilization, humans have been collecting pretty shells from snails and other molluscs. The remains of children found in the Grimaldi Caves, one of the earliest sites of human settlement, were found with ornamental shells. Shells were also used to replace teeth in some cultures!

Our fascination with the prettiness of shells continues, as does their mystery! Scientists still don’t know much about how these animals make and order their shells. Questions like, “How do animals use aragonite when it can barely remain stable in Earth’s normal conditions?” are just beginning to be answered.

Sure enough, the astonishing diversity of life will continue to keep our minds curious, engaged, and determined to protect this incredibly planet from the effects of climate change!