The rotors on top of a helicopter are there to make it fly. The sound of the rotors chopping through the wind has become universally associated with an imminent chopper arrival. The rotors are so big and noisy, it’s actually hard not to notice their presence. However, many other folks probably miss the ‘other’ rotor, which is installed at the rear of the helicopter – the tail rotor. The tail rotor is there to make sure that the helicopter doesn’t simply fly in circles. Yes, it also helps to turn the helicopter.

I am sure that even someone who knows absolutely nothing about helicopters understand that the rotors sitting on top of helicopters are there to make them fly. The sound of those rotors chopping through wind has become universally associated with an imminent chopper arrival. The rotors are so big and noisy, it’s actually hard to not notice their presence.

However, many other folks probably miss the ‘other’ rotor, which is installed at the rear of the helicopter – the tail rotor. Why is it there? More specifically, what good could it possibly do sitting at the tail-end of the helicopter? 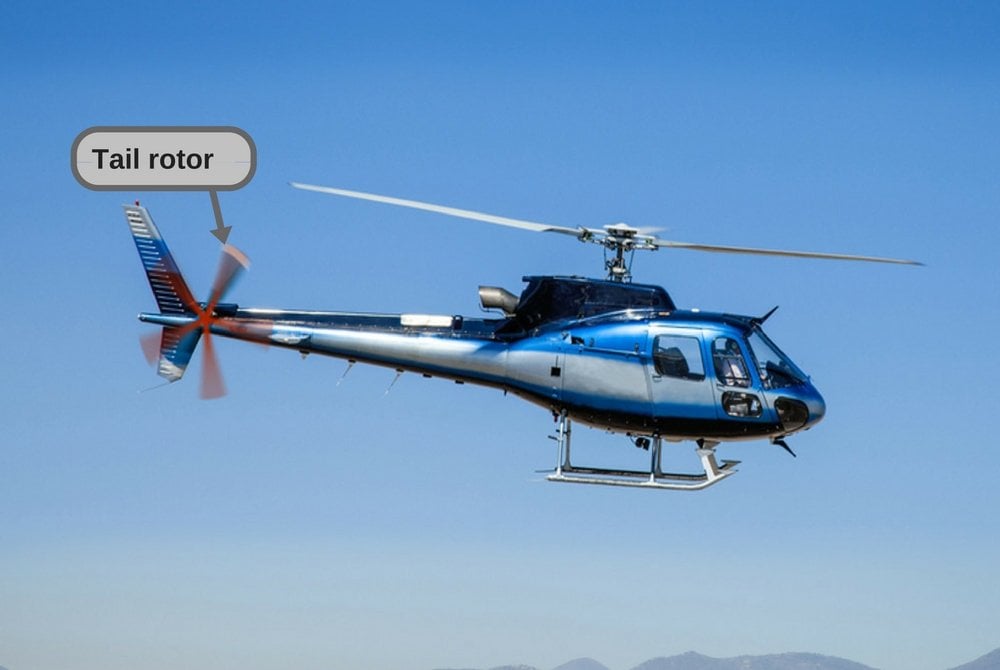 Short answer: The tail rotor is there to make sure that the helicopter doesn’t simply fly in circles. Yes, it also helps to turn the helicopter.

Flight Of A Helicopter

A helicopter flies/hovers by generating lift with its main rotors. The rotating blades push the air down, which in turn pushes the helicopter up, keeping the entire craft airborne. However, there’s one important catch here…

When The Fuselage Starts To Rotate…

According to Newton’s third law of motion, for every action, there is an equal and opposite reaction. What this means is that when you apply a force on a body in a given direction, that body applies an equal amount of force on you, and in the direction opposite to your application of force. There are numerous practical examples of this phenomenon: the recoil of a gun, the launch of a rocket, how that same rocket turns in space, lifting heavy weights… the list is endless. 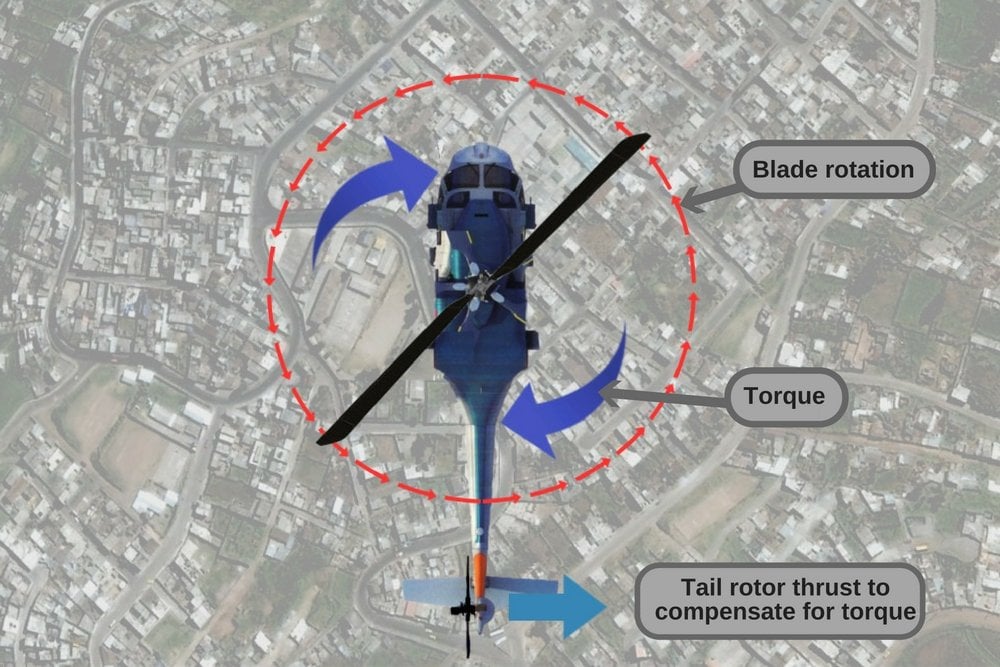 Applying the third law of motion to the case of helicopter rotors, you would see that since the main rotors turn, say, counter-clockwise, the fuselage (the body of the chopper) would be pushed in a clockwise direction. Simply put, the helicopter would turn in circles in the opposite direction of the blades’ rotation.

Let me illustrate this with an example: sit in a swivel chair and don’t let your feet touch the ground. Now, try to rotate the chair counter-clockwise. You would notice two things: one, it’s much more difficult than you first imagined; and two, you’d be turning clockwise, despite trying to turn in the opposite direction.

Essentially, the same thing happens with a helicopter, where the main rotors, while turning in one direction, push the fuselage the opposite way. Looking at a helicopter that’s turning in circles (some sight that would be!), a physicist would immediately note that it’s rotating due to ‘torque’, a twisting force that causes an object to rotate.

The Role Of The Tail Rotor The tail rotor is a vertical (or near-vertical) set of blades mounted at the end of the tail of the chopper. It ensures that the torque produced by the main rotors is properly compensated for by ‘pushing’ the chopper in the opposite direction of the torque. By doing this, it ensures that the chopper doesn’t wobble and remains stable in flight. This is why a helicopter is in serious trouble if its tail rotor is damaged.

Furthermore, the tail rotor’s position and distance from the center of gravity of the chopper provides thrust in the same direction as the main rotor.

It should be noted that using a tail rotor is not the only way to compensate for the torque; coaxial rotors can also achieve the same thing. 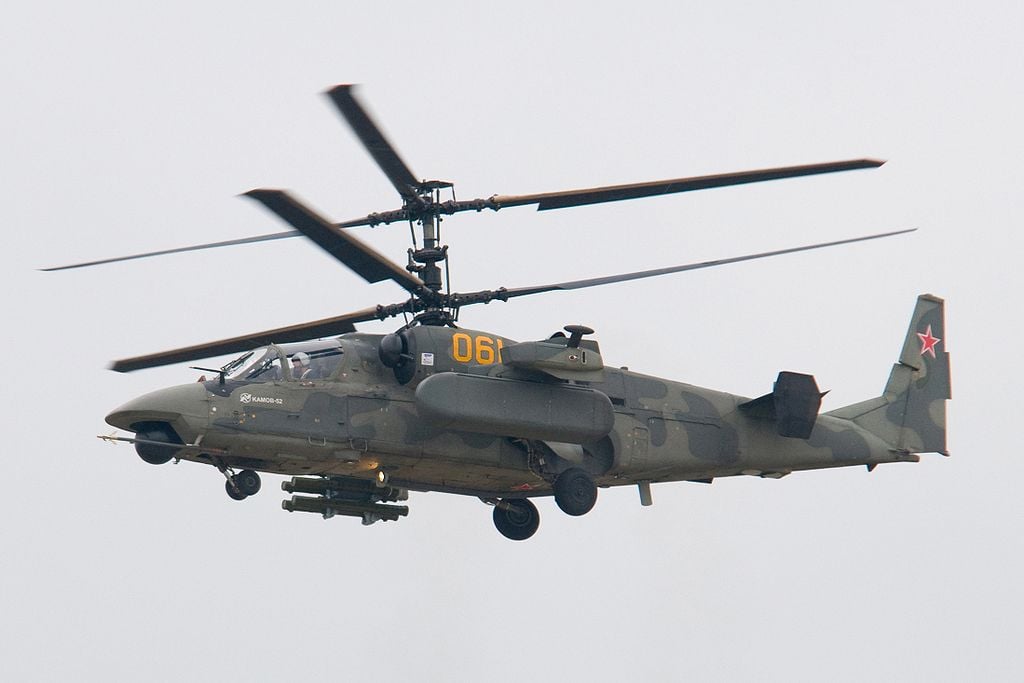 Also Read: Can A Helicopter Fly Upside Down?

In addition to counteracting the torque produced by the main rotor, the tail rotor can also be used to turn the chopper in a desired direction by altering the pitch angle of the rotor blades. Directional control is achieved by the pilot when he changes the pitch of the blades using anti-torque pedals, which are installed in the cockpit.

There are certain drawbacks of tail rotors, such as making the chopper louder and using up some of the available engine power that could be used to generate lift. While both of these problems are accounted for in choppers with coaxial rotors, those variants have their own disadvantages too. In effect, whether you want to use a conventional helicopter with a tail rotor or a chopper with multiple rotors depends entirely on your operational requirements. Either way, be safe up there!