Drones are robotic aircraft that are controlled remotely by a pilot or by an onboard computer. They can be used for a variety of purposes, including surveillance, photography, and recreation.

The term “drone” is actually taken straight from the sci-fi world. Drones are used for many reasons for filming, military surveillance and recreational activities. Drones fall under an intersection of aerospace, robotics, and mechatronics. Drones can range from entirely autonomous military-grade drones to your average remote-controlled drones you might see a kid flying in the park. Another name for drones is Unmanned Aerial Vehicles (UAV). These machines are primarily used in situations where the conditions are dry, dull or dangerous for human pilots. However, the term drone can be highly misleading, as there are many different kinds. Let’s first take a look at the different parts that make up a traditional drone. 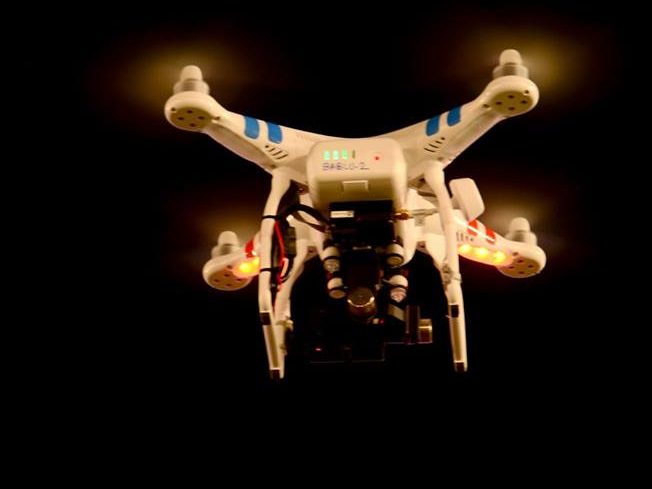 Parts Of  A Drone

The drone tech we will be looking at is the standard consumer-friendly drone used by any ordinary person with some extra coin in their pocket. The first and most important part of a drone is the frame. Frames are typically made from plastic or carbon fiber and can be arranged with different arm variations (tri, quad, hex, oct). The end of each arm houses the motor and propeller, while the center holds the flight controllers, gimbals, and other electronic gear. Most of the weight should be at the center of the ship, as this leads to the best flight characteristics, by keeping the center of gravity centralized. As with all parts concerning the drone, the weight is significant. The heavier the frame, the less lift can be achieved. However, you don’t want a super lightweight frame that will break upon impact. Carbon fiber tends to be a favorite because of its strength and minimal weight.

The next most important part is the motors. There is a separate motor for each blade/arm. Motor decisions are based on required power, and what you want the motor to do. If a multi-rotor is being built to carry heavy payloads and maintain the best possible flight times, then a slower-spinning, higher torque motor is ideal. However, in contrast, you may want an aggressive, fast system with lots of maneuverability and faster-spinning rotor systems. The measure of the RPMs, or speed of the rotors, is the kV value. Faster versions will be upwards of 1400kv, while slower drones with a longer battery life are in the 300-900kv range. These figures only work correctly if the correct battery and propellers complement the drone accordingly. 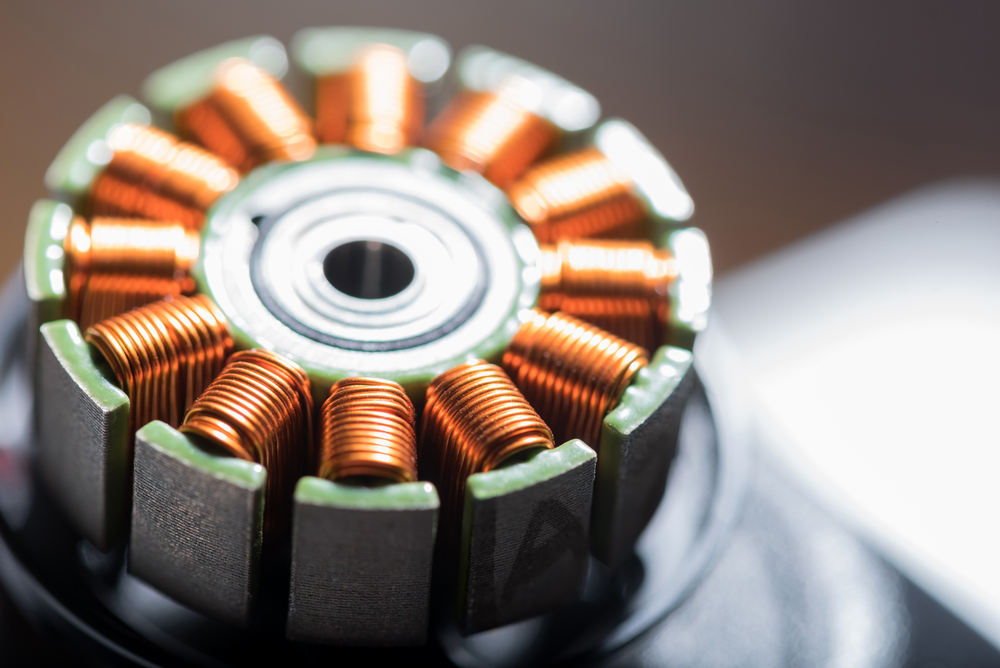 Propellers are the wings of the drone, and can also be made from plastic or carbon fiber. Carbon fiber is the higher-end choice, but more expensive. When picking propellers, be sure to check that your frame can house the size you are selecting. Most frames will have a max propeller size assigned to them. The size of the propeller should also match your intended purpose. If you wish to have a more aggressive build, choose propellers on the smaller end of the spectrum. The opposite is true for higher payload, longer flight time builds. Propellers generally come packaged as a pair, one being a CW (clockwise) spinning prop, and the other being CCW(counter-clockwise). The power of the drone comes from its batteries, which come in a wide variety of weights and capacities. It seems intuitive to always pick the largest capacity battery to achieve the longest flight time, but this is not always the case. As the capacity of the battery increases, so does its weight. There is a certain point where more capacity is no longer beneficial, and the benefits begin to diminish. This is an overlooked detail that can get people in trouble. If you want a high capacity 10,000 mAh 6s battery, be sure your motors and ESC are 6s, and that your flight controller can support it. 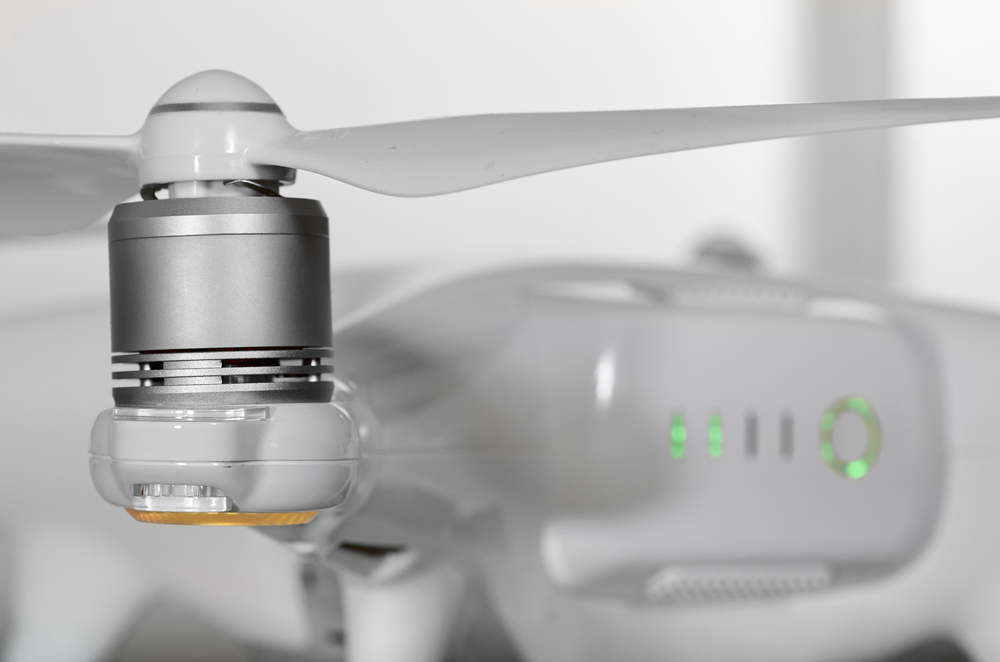 The part of the drone that is critical for control is the Electronic Speed Controller, which will run the motors you have. ESCs are rated for the amount of current they can consistently supply to the motor system. Since the motors are constantly spinning at different speeds, they need a speed controller to dictate that speed to them. If the motors all ran at the same speed, you would always be hovering. Since we’re not changing the pitch of the rotors, the pitch of the system is controlled through the difference in motor speeds. It is highly recommended to use four identical ESCs.

The Transmitter and Receiver help in communication between the drone and the person controlling it.  The transmitter “transmits” the signal and the receiver “receives” it. The receiver is connected to the flight controller; it delivers these inputs and then outputs the responses to the motors. The choice of transmitters is a little more basic. Transmitter choice is most often based on the number of channels required for operation. For multi-rotor drones, the bare minimum is four (roll, pitch, yaw, and throttle). Having more is always a nice convenience. A separate channel can also be used for autopilot, operating a camera gimbal, retractable landing gear, etc.

Now that you have a basic understanding of the different parts of a multi-rotor drone, it’s time to discuss how all these parts come together to achieve flight. Let’s use a quadcopter for the following examples. A quadcopter uses four different propellers, powered by four different motors, situated on four separate arms. Easy, right? Each spinning propeller creates its own torque. Newton’s Third Law states that “for every action; there is an equal and opposite reaction.” Thus, if a propeller is spinning, the arm holding it will also want to spin in the opposite direction. This is the law of Torque Reaction, and is why a traditional helicopter has a tail-rotor, to compensate for that fuselage torque. 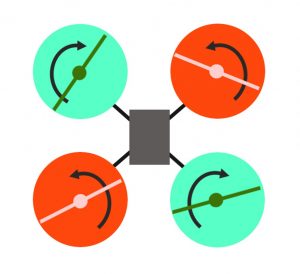 In a quadcopter, we don’t need a tail rotor. Do you know why? Because we can combat that per-propeller torque with an equal and opposite torque (the propeller opposite it). The neighboring propellers cancel out each other’s torque effect. This allows quadcopters to hover exceptionally well. If you were to hover a helicopter and apply more power, there would be more torque, and more power would be needed from the tail rotor. This takes many hours to master, especially to make it look smooth. These problems don’t exist in multi-rotor drones because power increases are always done equally and opposite in the propeller system. We want to do more than just hover our multi-rotor. If we want to move in a forward motion, then both forward propellers will apply less power, whereas the back propellers will add more. This principle applies to all roll directions. 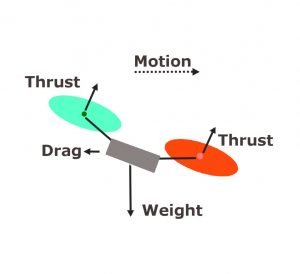 Illustration of physics behind the drone’s motion

Also Read: Past And The Present: The History And Evolution Of Robots

Yaw movement is different, however. The picture below depicts what would happen if we wanted our craft to yaw left, meaning that we want that torque reaction to be more prominent in the left direction. Thus, the quadcopter gives more power to the propellers that have a left torque direction (clockwise-spinning propellers). Ascending and descending are very simple. Power is either increased to the entire propeller system to ascend or decreased to make a descent.

You can also fly your quadcopter in a multitude of ways. You can be in slow yaw while ascending, while also applying a slight roll. The algorithm and codes built into the flight computer take these directions into consideration and apply the necessary power to each propeller. This enables the quadcopter to maintain a stable and smooth flight. With all this in mind, the next time you go out to fly your drone, you’ll know exactly how much planning and delicate technology is required to fly it!