The medulla oblongata is a small, but important, part of the brain that controls involuntary actions of the body, such as breathing, heartbeat, and blood pressure. It also acts as a bridge between the brain and the spinal cord, and is involved in some reflexes, such as sneezing and coughing.

The human brain is one of the most complex and fascinating organs of any species on Earth. Divided into a number of parts, each section has its own distinct functions that ensure the seamless functioning of our body. The brain controls all our functions, like the boss of a company, or the motherboard of a computer.

It can be divided into 3 main parts – forebrain, midbrain, and hindbrain. The forebrain consists of the cerebrum, hypothalamus, thalamus and the retina. It controls cognitive functions like attention, decision making, emotion, and sensory and motor processing, among many other functions. The midbrain is responsible in processing motor and certain sensory information. The hindbrain is consists of pons, cerebellum and medulla oblongata. While the entire brain makes for an extremely interesting read, let us focus on that final part for now. 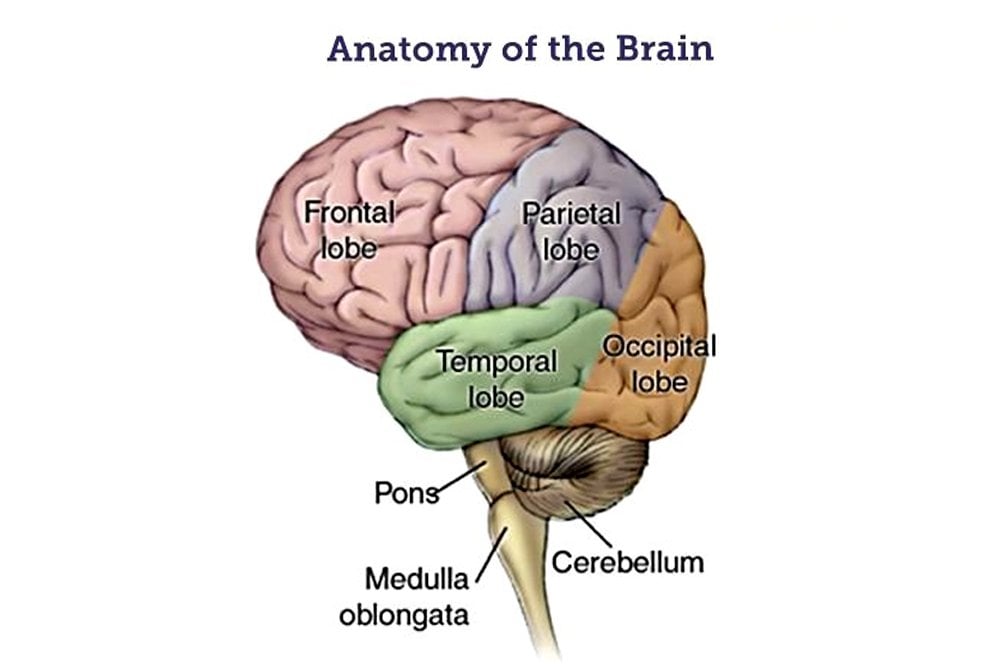 The medulla is conical in shape and tapers ventrally. It lies below the pons and connects the brain to the spinal cord. Measuring about 3 cm in length, and 2 cm at its widest point, this is a tiny, but extremely important, part of our brain.

External Anatomy Of The Medulla

On the posterior surface of the medulla, there is a midline fissure, known as the posterior median sulcus (sulcus is a shallow groove). It starts where the 4th ventricle ends, and continues down to the sulcus of the spinal cord. On its side are the fasciculus cuneatus and fasciculus gracilis. These are basically bundles of nerves coming from the upper and lower parts of the body.

On the anterior side, there is also a median fissure. This is continuous with the median sulcus of the spinal cord. However, the decussation from structures called the pyramids interrupts the fissure at certain places. Laterally from the fissure, there is the ventrolateral and posterolateral sulcus. 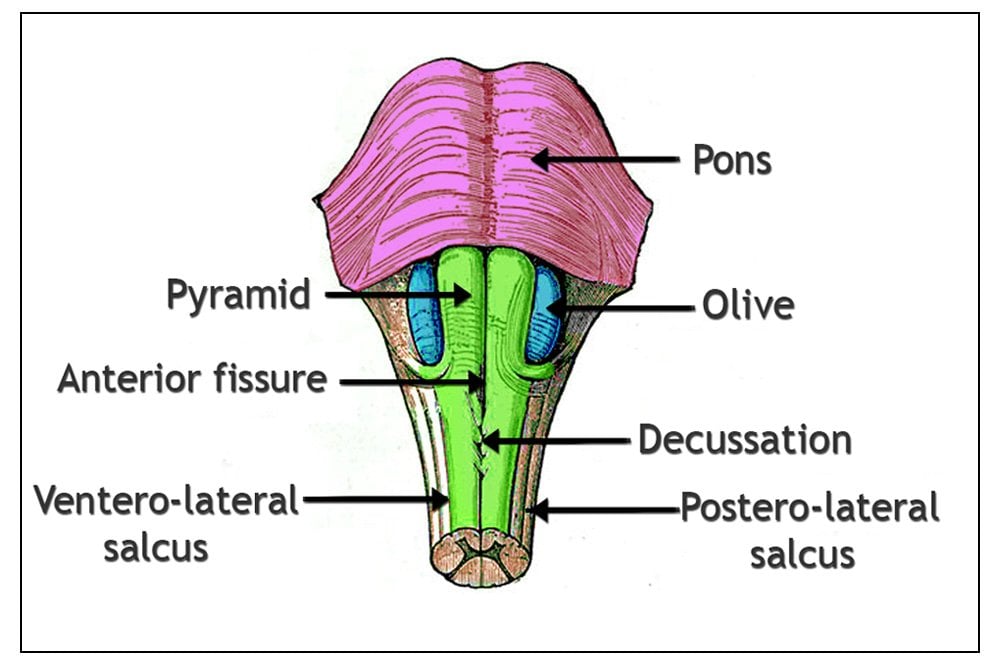 Internal Anatomy Of The Medulla

Similar to the external anatomy, the internal anatomy can also be divided into 2 parts – the ventral medulla and the tegmental medulla.

This consists of the pyramids, olives, and cranial nerves 9-12th rootlets.

Also Read: What Does The Spinal Cord Do For Your Overall Wellbeing?

The pyramids are located in the middle of the ventral medulla, and are separated by the anterior median fissure. The pyramids are made up of corticospinal tracts. These are bundles of axons that descend from the cerebral cortex and synapse/end in either the brain stem or the spinal cord.

The olives are paired structures located lateral to the pyramid. They are separated from the pyramids by the anterolateral sulcus.

This is the dorsal part of the medulla. It is formed from the bottom part of the 4th ventricle. This contains grey matter, surrounded entirely by white matter. Grey and white matter refer to non-myelinated and myelinated axons, respectively.

The cranial nerves of the medulla also originate from the tegmental part and exit the medulla ventrally. 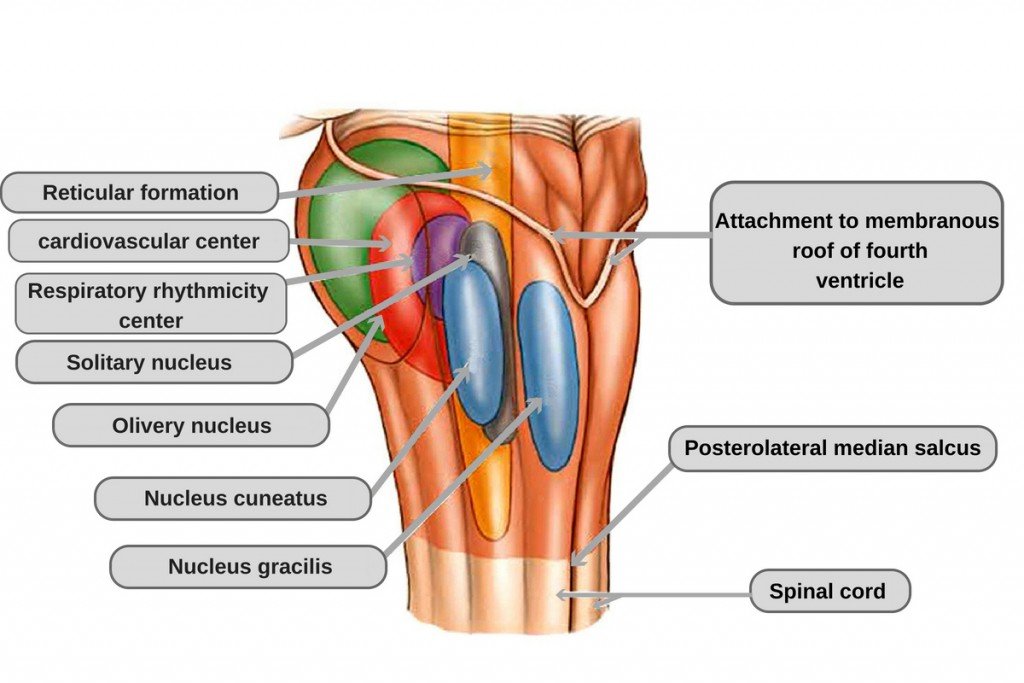 The medulla oblongata’s distinct anatomical importance was discovered French physician Julien Jean-Cesar Legallois in 1806. He noticed that removing the cerebrum and cerebellum in rabbit didn’t affect their breathing. Legallois probed further into the brain and found that removing a part of the medulla caused the rabbits to stop breathing. He therefore concluded that the medulla had a ‘respiratory center’ within it. As neuroscience matured and scientists began to understand the brain better, the vital role of the medulla came to light.

The medulla acts as the bridge between the brain and the spinal cord through neurons that carry communication to and fro. It contains several nuclei (clusters of neurons in the brain) sort incoming information from the body and relay it to the appropriate brain regions for further processing. Apart from this, it also controls the Autonomic Nervous System of the body through neural connections the organs as well as connections made to the hypothalamus, a major regulator of the ANS. This part of the nervous system is responsible for controlling the automatic or involuntary actions of our body.

More specifically, it controls involuntary actions of the body such as breathing, heartbeat, blood pressure, etc. The medulla controls vasoconstriction and vasodilation of the blood vessels, which adjusts the blood flow rate and is essential for overall health. These functions as well as its connections with the hypothalamus make it a crucial component for maintaining physiological homeostasis. This makes it an interesting research study for many developmental disorders of homeostasis.

Also Read: What Is The Cerebrum? What Is Its Structure And Function?

The medulla oblongata is also involved in some reflexes. These reflex arcs unlike many others in the body do not include the spinal cord. An example of such a reflex arc is the one involved in sneezing. Cranial nerve V sends signals from the nose about some irritant to the sneeze center of the medulla oblongata which them begins the process making you sneeze. Other reflexes include coughing and vomiting. 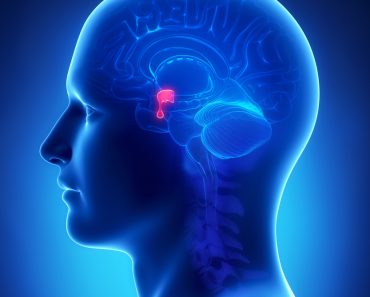