Homeostasis is the process by which a living organism maintains a stable set of conditions that are necessary to support life. Receptors in the body detect changes in the internal or external environment and send nerve impulses to the brain. The brain then sends a message back to the organ or tissue to adjust back to normal levels.

Have you ever wondered why you don’t swell up like a water balloon when you chug water after a good workout? Isn’t it strange that our bodies change and grow rapidly during one part of our lives – childhood and puberty – but then slow down in their evolution and “even out” for much of our adult life? Well, if this is a question that has plagued you in front of the mirror year in and year out, there is a simple explanation – homeostasis.

Technically speaking, homeostasis is a general term to describe any processes by which a living organism maintains a stable set of conditions – internal and external – that are necessary to support life. Essentially, homeostasis is a catch-all term for the manner in which a steady-state environment is maintained, ranging from the smallest insects to the macroscopic level, the manner in which planet Earth is able to sustain life.

Within the context of this article, we will primarily discuss homeostasis as it relates to humans; there is plenty to discuss in that regard without including the thousands of other processes and systems that exist in the world around us. 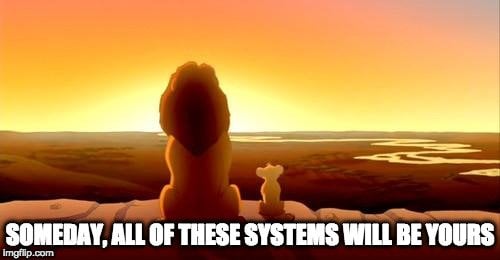 When it comes to survival, humans depend heavily on our own bodies to protect us against changes in temperature, water levels, salt balance and hormones, as well as levels of sugar, calcium and oxygen, among many other nutrients and compounds. For example, if you gorge on an entire frozen pizza, that is a huge amount of sodium, but your body doesn’t immediately begin to retain water. If you step outside in the middle of winter, even though the rest of the world is frozen, your body will prevent you from becoming a popsicle… for a while, at least.

The Science of Homeostasis

To better understand the essential nature of homeostasis, it is easiest to look at the major areas of this synthesis of processes, beginning with the generic four-part structure – change, receptor, control center and effector. Homeostasis is an extremely complicated system of feedback loops that are perpetually changing in the body, but the following aspects are the fundamental steps that occur.

Homeostasis may result in large-scale effects on the body, but it operates on a cellular level. When any type of cell experiences a change in its internal or external environment, whether that is temperature, chemical composition etc., the cell will have to act in order to remain stable, marking the start of the homeostatic response.

Identifying and acting on the change occurring in the cell is the job of receptors, namely nerve endings that can communicate with the rest of the body’s nervous system, including the brain. There are an estimated 20 million nerve endings present in the body’s tissues, representing more than 100 billion neurons, many of which are finely tuned to detect any change and inform the brain. 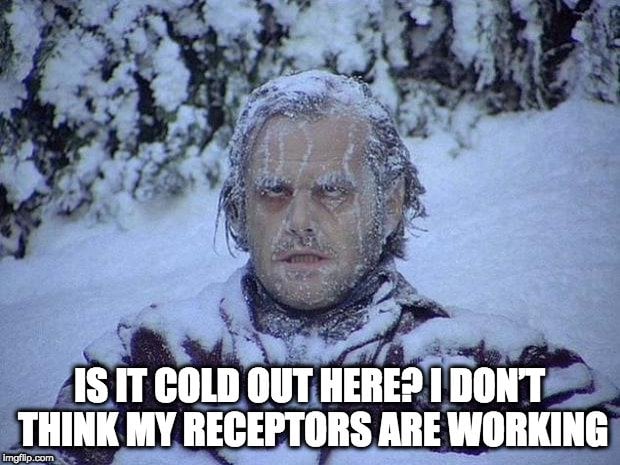 The receptors send nerve impulses to the control center for that particular part of the body, whether it is the heart, skin, kidney, big toe or pancreas. All of the body’s control centers lie in the brain, but those related to homeostasis – energy, water, salt, temperature etc. – are primarily found in the hypothalamus. Once the nerve impulse is received, the brain sends a message back, instructing the organ or tissue to adjust back to “normal” levels.

This reply is received by an effector, such as the heart or any other organ, which immediately counteracts the change experienced by those cells. This entire process seems to happen instantaneously, but in reality, some of those nerve impulses travel faster than 3,500 meters/second, nearly 8,000 miles per hour!

Homeostasis in the Body

As mentioned above, homeostasis relates to maintaining temperature, sugar, nutrient, and salt levels in the body, as well as more tangible functions, such as your heart rate, blood pressure and breathing rate. 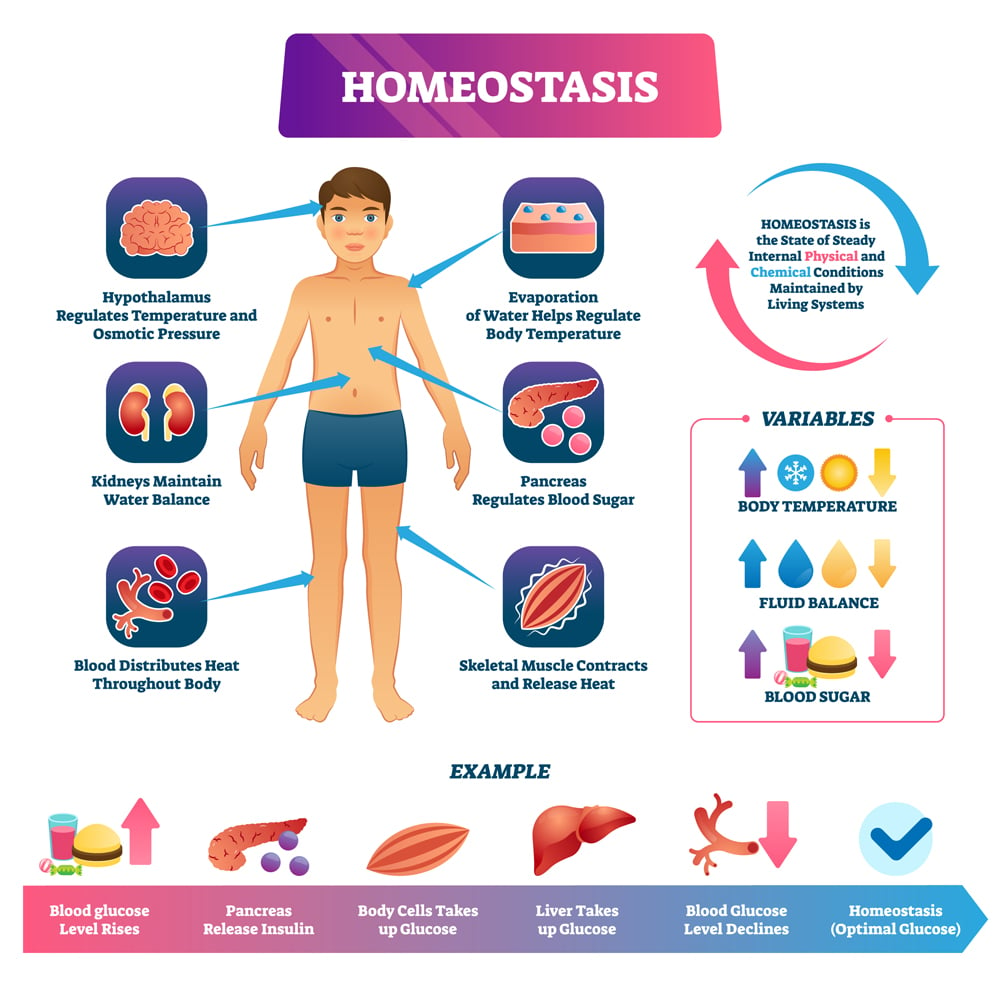 Due to our high metabolic rate, the human body maintains an impressive internal temperature of roughly 98.6 degrees Fahrenheit. Since the external environment is typically not that warm, humans are almost constantly losing heat to their surroundings. To counteract this, the hair on your body will rise when you get cold, and goosebumps will appear on your skin, an evolutionary remnant of our hairier ancestors.

When experiencing a drop in temperature, your skeletal muscles may also begin to constrict, causing shivering, while the smooth muscles in your arterioles will contract, lowering the amount of blood to your extremities, which helps to keep the core of your body warm and functioning normally, even if your fingers and toes start to feel a bit numb! A rise in temperature above the normal level will also stimulate a homeostatic response, often in the form of sweating and dilation of the blood vessels, allowing more blood near the surface of the skin, away from the core, which releases more heat into the external environment.

Maintaining proper glucose levels in the body is essential for energy distribution, but considering that everything we eat, drink and do will affect our energy stores and nutrient pool, homeostasis related to blood composition is a constant job. When glucose levels drop or rise outside of their normal level, the pancreas is signaled to create more insulin, which transports glucose to the cells, or more glucagon, a hormone that breaks down glycogen into glucose, which can then be transported to the cells and used.

Maintaining salt and water levels in the body is critical to the basic functioning of every cell, so this balance is strictly maintained. The kidneys are the primary effectors here, as they can increase urination to lower overall water levels, or they will retain water and excrete the excess sodium to prevent a dangerous buildup.

Blood pressure is one of the more complex aspects of homeostasis, and goes beyond the scope of this article, but essentially, the medulla oblongata, the adrenal glands, the sympathetic nervous system and the parasympathetic nervous system all combine to keep blood pressure at a healthy level, or increase it when the external environment requires, such as during a fight-or-flight response. If your muscles, tissues and cells aren’t receiving enough oxygen-rich blood, they won’t be able to function effectively. When you are at rest, your breathing rate will remain steady, as will the delivery of oxygen. However, when you begin exerting yourself, the respiratory system control center will be activated, causing an increase in your breathing rate and your blood pressure; more specifically, it directs your lungs to take in more oxygen and your heart to move it through the body faster in order to keep the blood-oxygen levels steady and safe! There are thousands of other smaller processes and systems that exist to keep our bodies functioning normally, but the best thing of all is that most of these homeostatic processes happen naturally, without having to consciously control these changes. Lifestyle habits, such as eating overly salty or sugary food, smoking cigarettes, or walking around barefoot in the snow can make it harder on your body to maintain a stable environment, but generally, your body has it completely under control!