The pituitary gland is known as the ‘master gland’ of the body. In its role as the master gland, it looks after a wide variety of functions. You name it and the pituitary likely controls it, from growth and development (in children) and metabolism, to our reactions to stress and trauma, reproduction, childbirth and even breastfeeding.

The human body performs a massive variety of functions, but have you ever wondered how all these functions are carried out so effortlessly? There must be something that controls and coordinates everything smoothly.

Believe it or not, there is a tiny little organ sitting at the base of the brain that calls the shots. That’s the pituitary gland for you!

What Is A Gland?

Before we delve into the workings of the ‘master gland’, we must first understand what a gland is. A gland is an organ that produces substances like hormones, enzymes, sweat, tears and saliva. A gland can be further divided into two types. Exocrine glands are those that release their products through ducts. For example, the pancreas releases enzymes (for digesting food) into the gut through a duct. Other examples include the sweat, salivary and tear glands. On the other hand, endocrine glands release their products directly into the bloodstream.

Here, we will talk about endocrine glands, since they’re ones that release hormones. Hormones are chemical messengers in the body. They coordinate the functions of different organs by telling them when to do what. For example, the adrenal gland releases adrenaline when we’re stressed and the thyroid gland releases thyroid hormones to increase our metabolic rate.

But who decides when a hormone should be released and when the flow should be stopped? Imagine a school with a bunch of children without a headmaster… absolute chaos, right?

That is where the pituitary gland steps in! 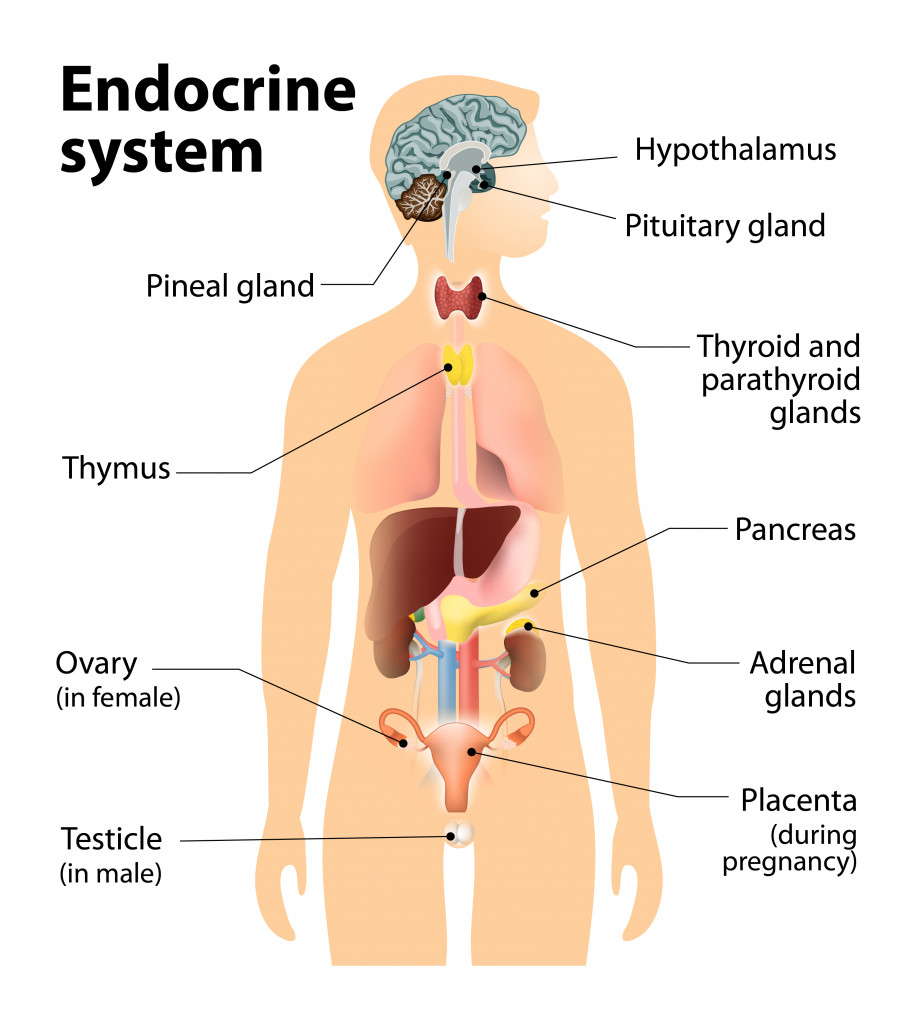 A diagram showing all the major endocrine glands of the human body. (Photo Credit : Designua/Shutterstock)

What Is The Function Of The Pituitary Gland?

The master gland looks after a vast range of functions in the body. You name it and the pituitary controls it, from growth and development (in children) and metabolism, to our reaction to stress and trauma, reproduction, childbirth and even breastfeeding.

The pituitary gland has two lobes: one in front is called the anterior lobe and the one slightly behind is called the posterior lobe. The  two lobes each release a different set of hormones.

The growth hormone acts on almost all tissues to stimulate growth and development. The thyroid stimulating hormone (TSH) activates your thyroid gland, which is responsible for your basal metabolism. On the other hand, the corticotrophin hormone stimulates the adrenal glands to release cortisol, the stress hormone. After puberty, the pituitary gland releases two special hormones called luteinizing hormone (LH) and follicle stimulating hormone (FSH), which are crucial for attaining reproductive maturity. In breastfeeding mothers, the pituitary gland secretes prolactin hormone, which is essential for milk production.

Phew! That was an exhaustive list. In contrast, the posterior lobe only releases two hormones. The first is vasopressin, which prevents dehydration, and it also releases oxytocin, which helps in childbirth and the release of breastmilk. 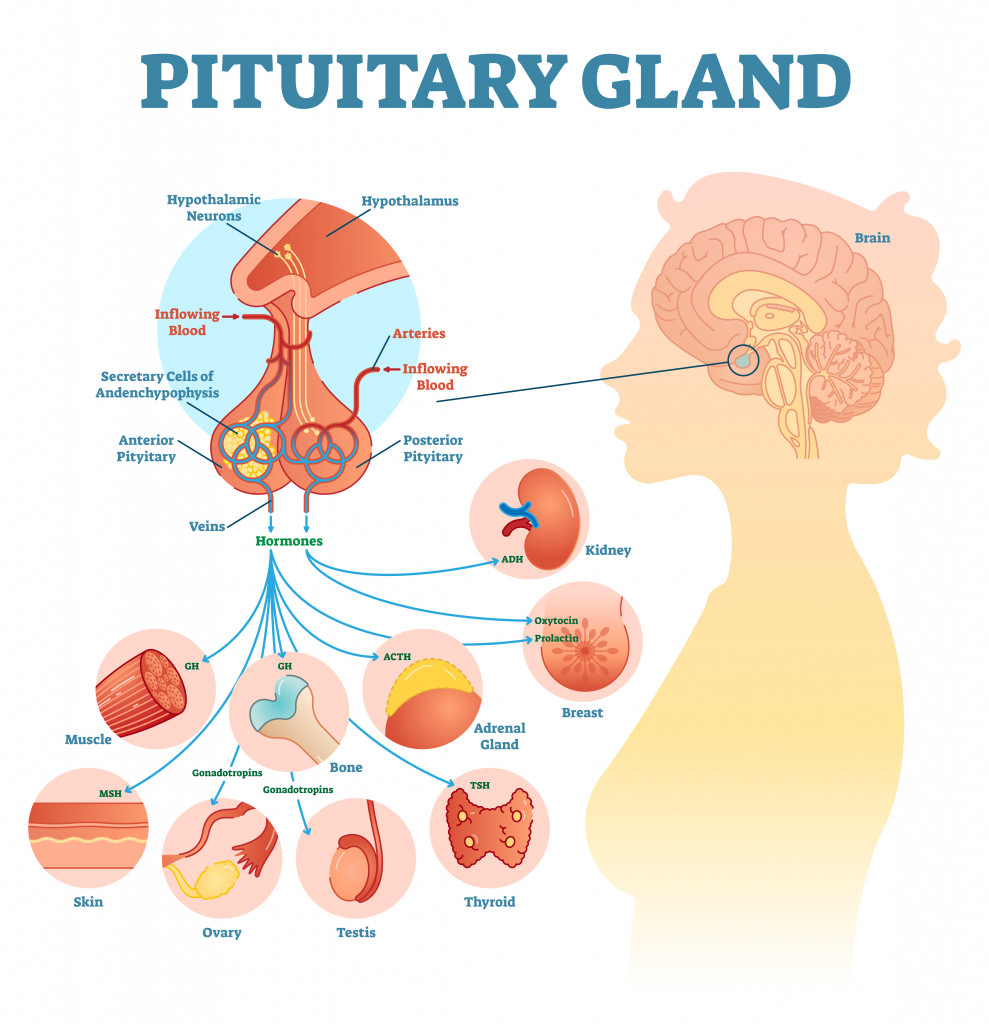 A diagram showing the different parts of the pituitary gland that control other glands. (Photo Credit : VectorMine/Shutterstock)

The Hypothalamus Controls The Pituitary Gland

However, even our master gland must obey a superior.  The pituitary is answerable to the hypothalamus, which is a part of the brain.

Now you might ask, why isn’t the hypothalamus the ‘master gland,’ since it controls the pituitary? Fair question.

Feedback Loop: How Does The Pituitary Gland Know When To Stop Secreting Hormones?

Any well-functioning organization thrives on feedback, right? The case is no different here.

There are two kinds of feedback at play: positive and negative. Most hormones operate on a negative feedback mechanism. This means that when the levels of the hormone increase to more than is required, they send a signal to the pituitary to stop stimulating the respective gland. In a way, negative feedback brings things back to equilibrium.

Positive feedback is seen in childbirth, where very high levels of oxytocin are required to push out the baby. A positive loop keeps sending signals to the pituitary to stimulate the gland to release more and more hormone until it reaches extreme levels.

The feedback mechanism involves the hypothalamus too. The pituitary relays the signals it receives to the hypothalamus, which in turn increases or decreases the release of hormones as and when required. 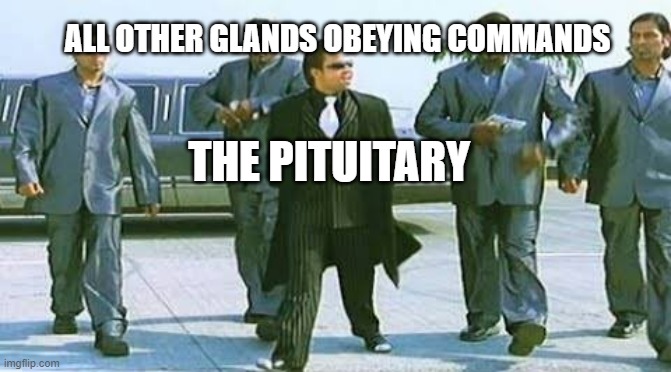 That’s the swagger of the pituitary gland!

The pituitary gland is the master gland of our body. It may be a pea-sized gland at the base of the skull, but it controls the release of hormones from many other glands. The pituitary is responsible for overseeing a wide range of essential functions, including growth, metabolism, stress response, reproduction and childbirth.