The twelve nerves originating from the brain and passing through the crevices of the skull (cranium) are called cranial nerves.

Nerves are bundles of thin fibers (made up primarily of axons) that perform the vital function of carrying information from one part of the body to another. They carry information from sensory organs to the central nervous system (brain & spinal cord) and back. 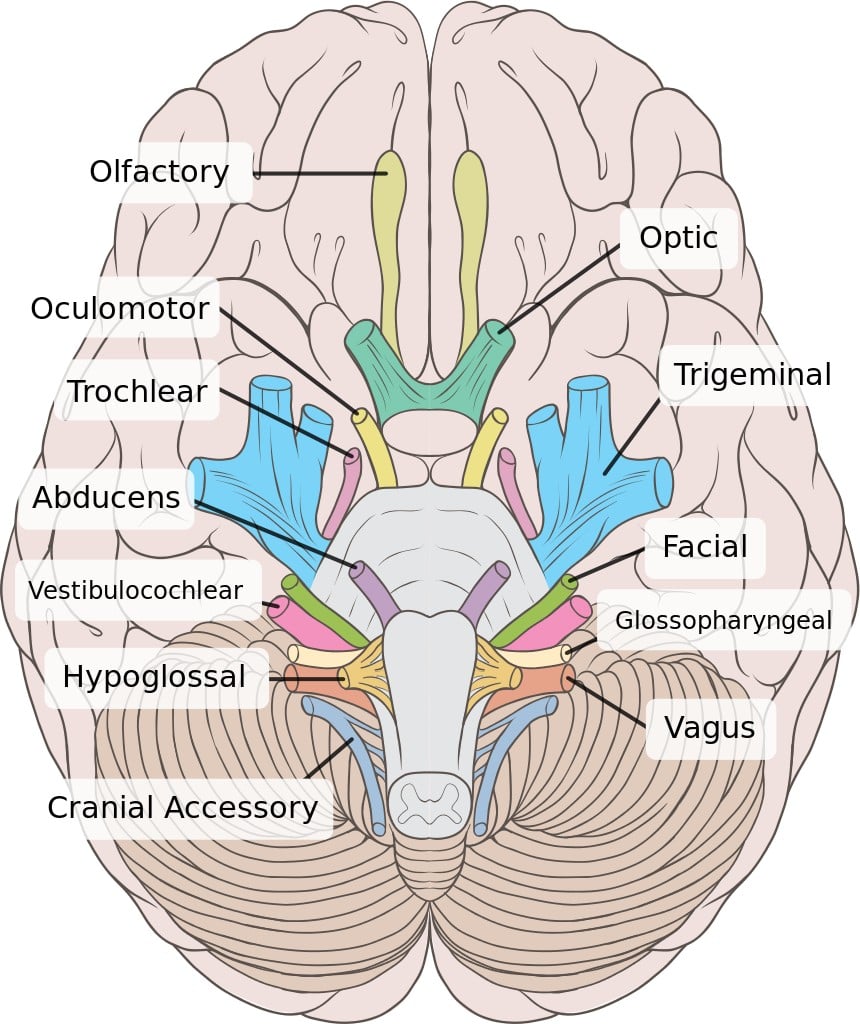 There are a total of twelve cranial nerves in the human body, each of which plays a very important role. (Photo Credit : Patrick J. Lynch/Wikimedia Commons)

A total of 12 nerves originate from the brain. Of those 12, 10 emerge from the brainstem (posterior part of the brain), while the remaining 2 find their roots in the cerebrum (part of the forebrain/uppermost portion of the brain). Each of the 12 cranial nerves is present in pairs, and extend down both sides of the human body (left & right). The cranial nerves are responsible for primarily providing sensory and motor nerves to parts of the head and neck.

The cranial nerves are designated Roman numerals based on their order of emergence from the brain (from the front to the back). The 12 cranial nerves are named based on their structure or on the function they are responsible for in the human body. The two cranial nerves that originate from the cerebrum are the olfactory nerve (I) and the optic nerve (II). The 10 remaining nerves are the oculomotor nerve (III), trochlear nerve (IV), trigeminal nerve (V), abducens nerve (VI), facial nerve (VII), vestibulocochlear nerve (VIII), glossopharyngeal nerve (IX), vagus nerve (X), accessory nerve (XI), and hypoglossal nerve (XII).

Let’s discuss the origin and function of these nerves, as well as what follows in the case of damage to these critical structures. 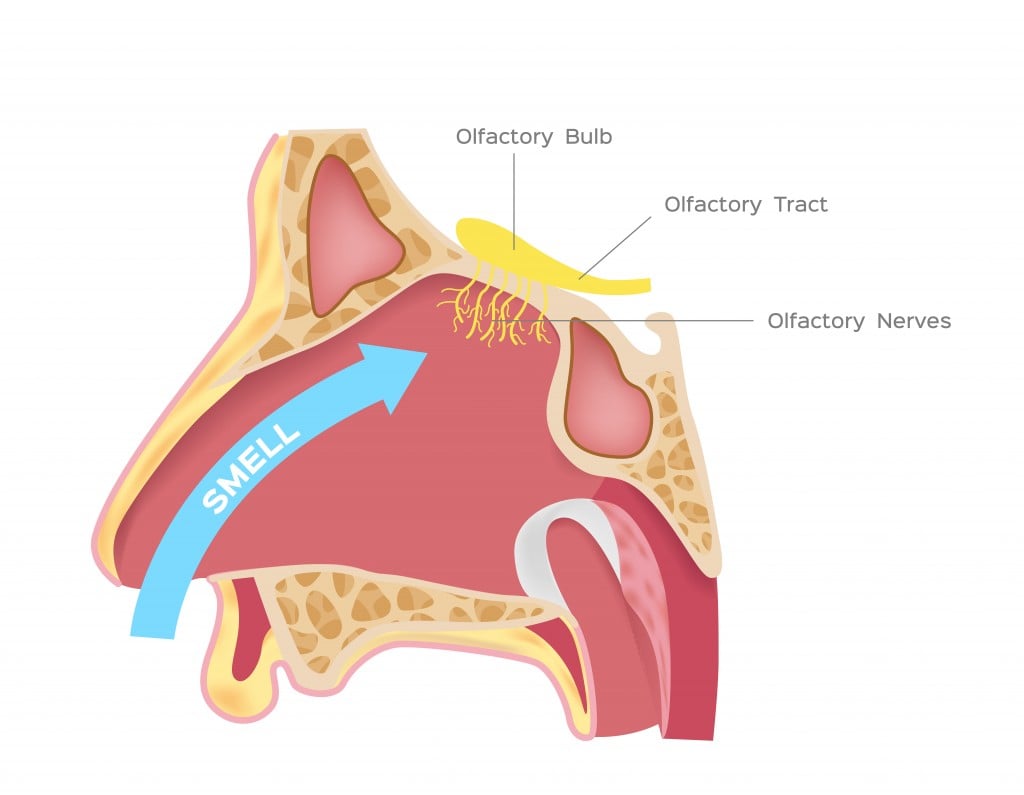 The optic nerve is another sensory nerve and is responsible for conveying information related to vision. The nerve finds its origin in the retina, at the back of the eye, in the form of axons of retinal ganglion cells. These axons leave the eye at a region called the optic disc and together form the optic nerve. 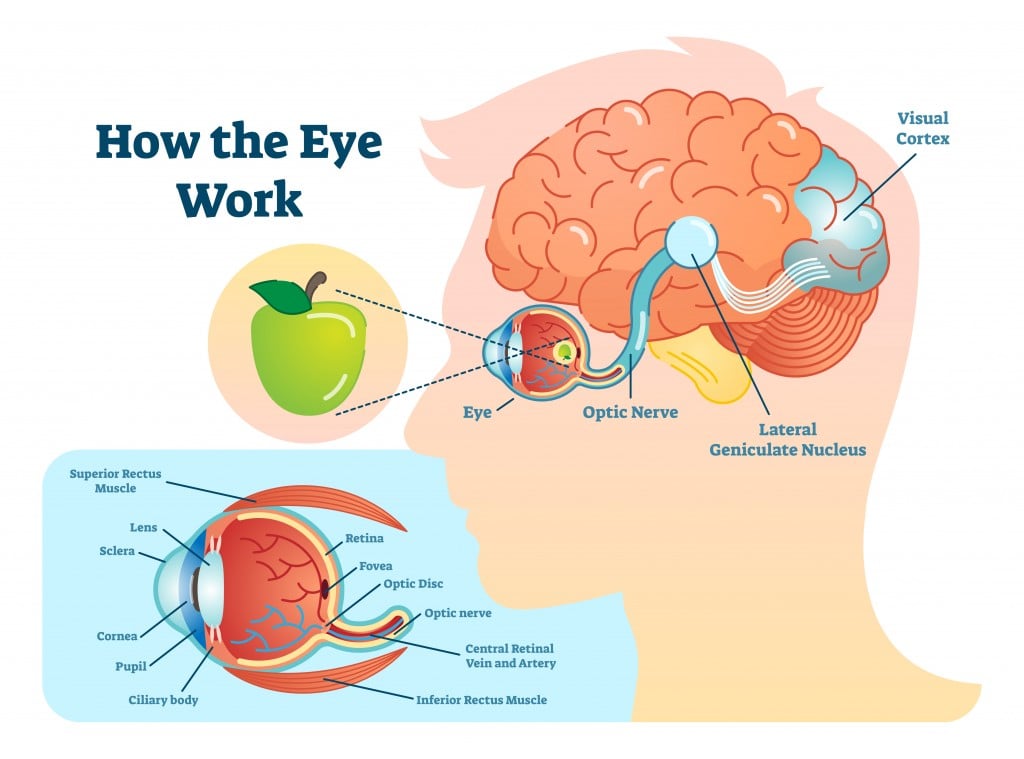 Depending on the location of the injury to the optic nerve, specific aspects of vision can be affected. This includes the inability to view objects on the left or right side, a total loss of vision in one eye, if the damage occurs before the optic chiasm, whereas damage to the middle portion of optic chiasm will lead to a loss in the lateral vision of both eyes.

The Oculomotor Nerve (III), The Trochlear Nerve (IV) And The Abducens Nerve (VI)

Cranial nerves III, IV and V are motor nerves and are responsible for the movement of the human eye.

CN III, better known as the oculomotor nerve, is perhaps the most important of the three. The oculomotor nerves originate in the oculomotor nucleus in the midbrain and separate into superior and inferior branches upon reaching the orbit of the eye. These nerves control four of the six extraocular muscles (muscles responsible for eye movement). While the nerve fibers originating from the Edinger-Westphal nucleus control the sphincter pupillae muscle and the ciliary muscle (pupillary reflexes). 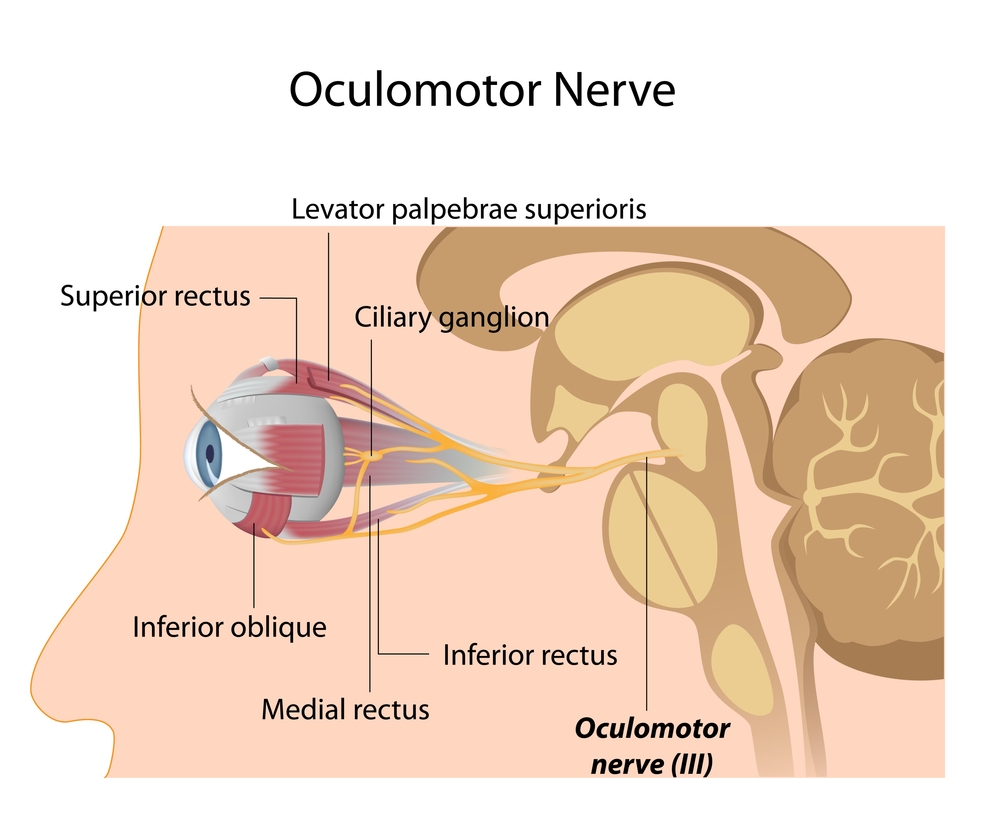 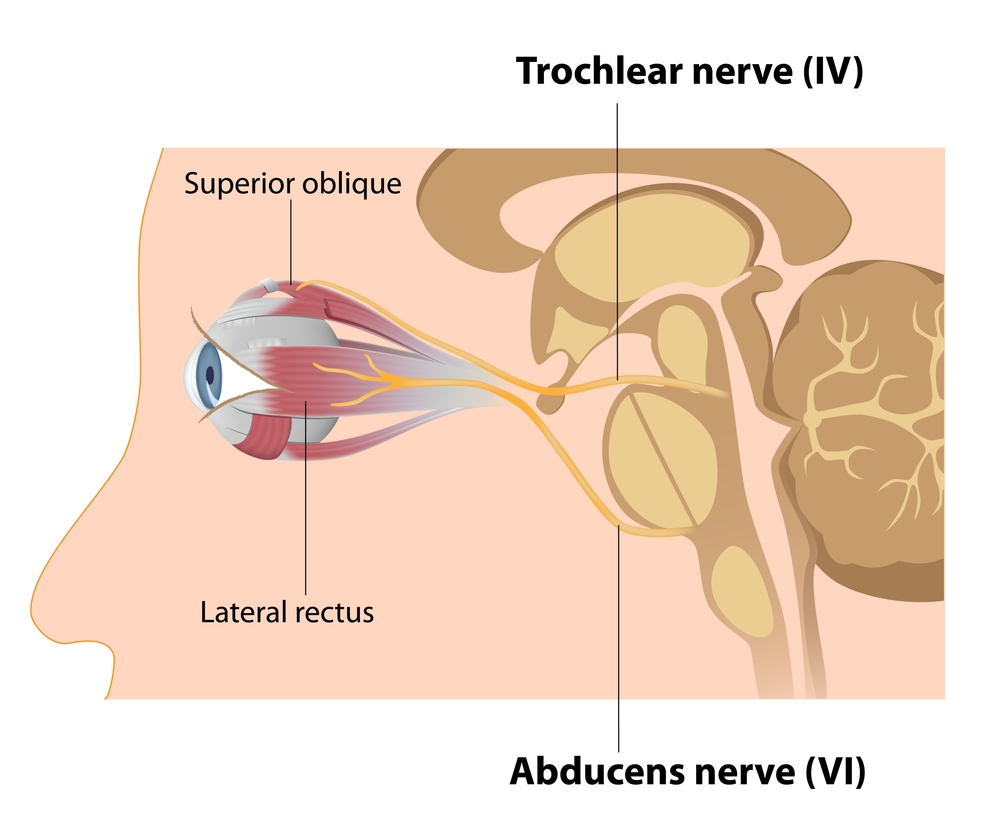 Damage to any of these three nerves affects the movement of the eye and ultimately lead to eye conditions, such as diplopia (double vision), esotropia (affected eye deviates medially), pupil dilation, problems voluntarily controlling the eyelid, etc.

The trigeminal nerve actually branches out into three different nerves, thus the name tri-geminal. The three nerves are the ophthalmic nerve, the maxillary nerve, and the mandibular nerve. These nerves are sensory, as well as motor. The ophthalmic and maxillary nerves are sensory nerves, while the mandibular nerve is both sensory and motor. They are collectively responsible for sensation in different parts of the face, as well as motor functions, such as the movement of the jaw (for biting and chewing) and the ear.

Also Read: What Does The Spinal Cord Do For Your Overall Wellbeing? 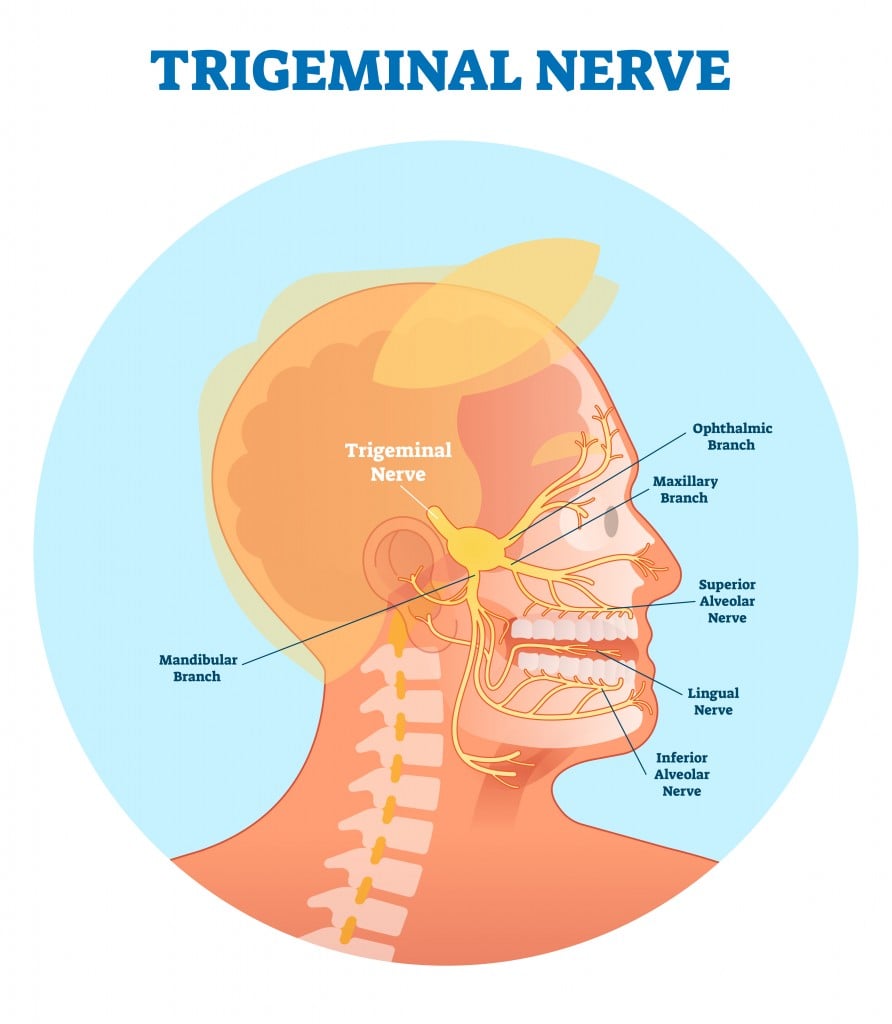 The facial nerve performs both sensory and motor functions. The nerve conveys sensory information regarding taste from the anterior two-thirds of the tongue and sensations from the outer ear. The motor functions of the nerve involve controlling the muscles of the jaw and the muscles used for facial expressions. It also innervates other major glands of the head, such as the salivary glands, tear-producing glands, paranasal sinuses, etc. 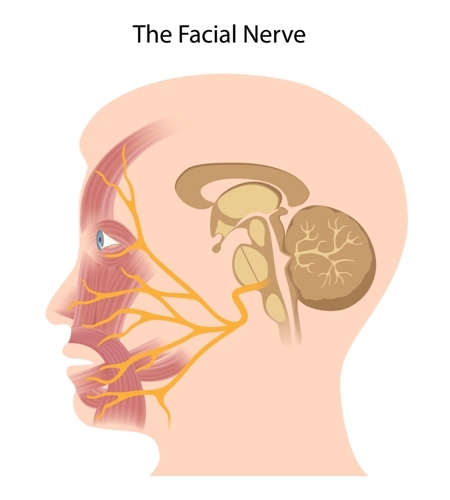 The facial nerve is associated with several nuclei in the brain. Both the sensory and motor roots originate in the pons and eventually fuse together to form the facial nerve. (Photo Credit : Alila Medical Media/ Shutterstock)

Facial nerve damage leads to a variety of problems, the most common being paralysis of one side of the face, which is also known as facial palsy. Victims suffering from facial palsy are unable to move facial muscles of the affected side; their mouths droop and they may also be unable to close their eye, among other things. 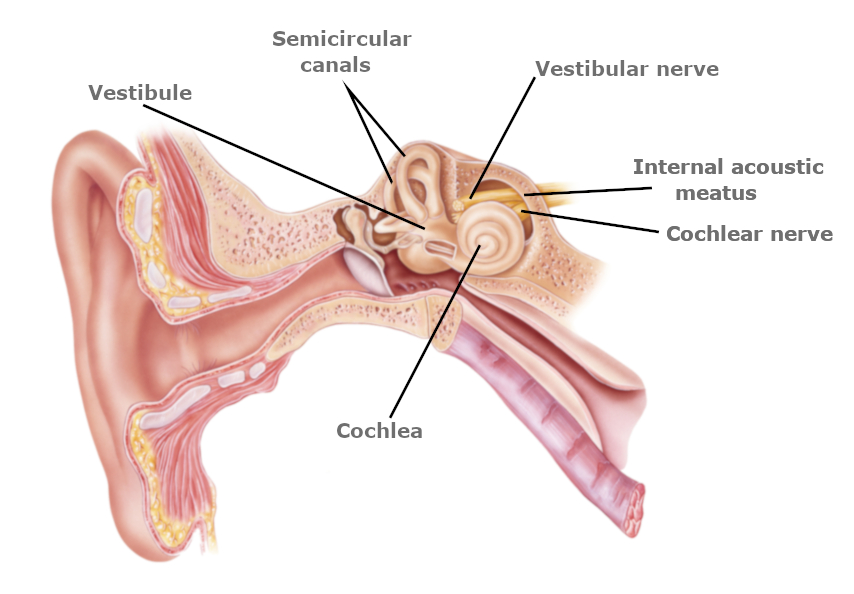 Damage to the vestibulocochlear nerve leads to problems in hearing, in serious cases, such as partial or complete loss of hearing, as well as tinnitus, dizziness, nausea, and loss of balance.

The glossopharyngeal nerve is both sensory and motor in nature. The nerve transmits sensory information from the posterior part of the tongue, upper pharynx, tonsils, outer ear, and carotid body to the CNS and carries motor signals to the stylopharyngeus muscle (which plays a role in speech and swallowing) and the parotid glands (the largest salivary gland in our body). 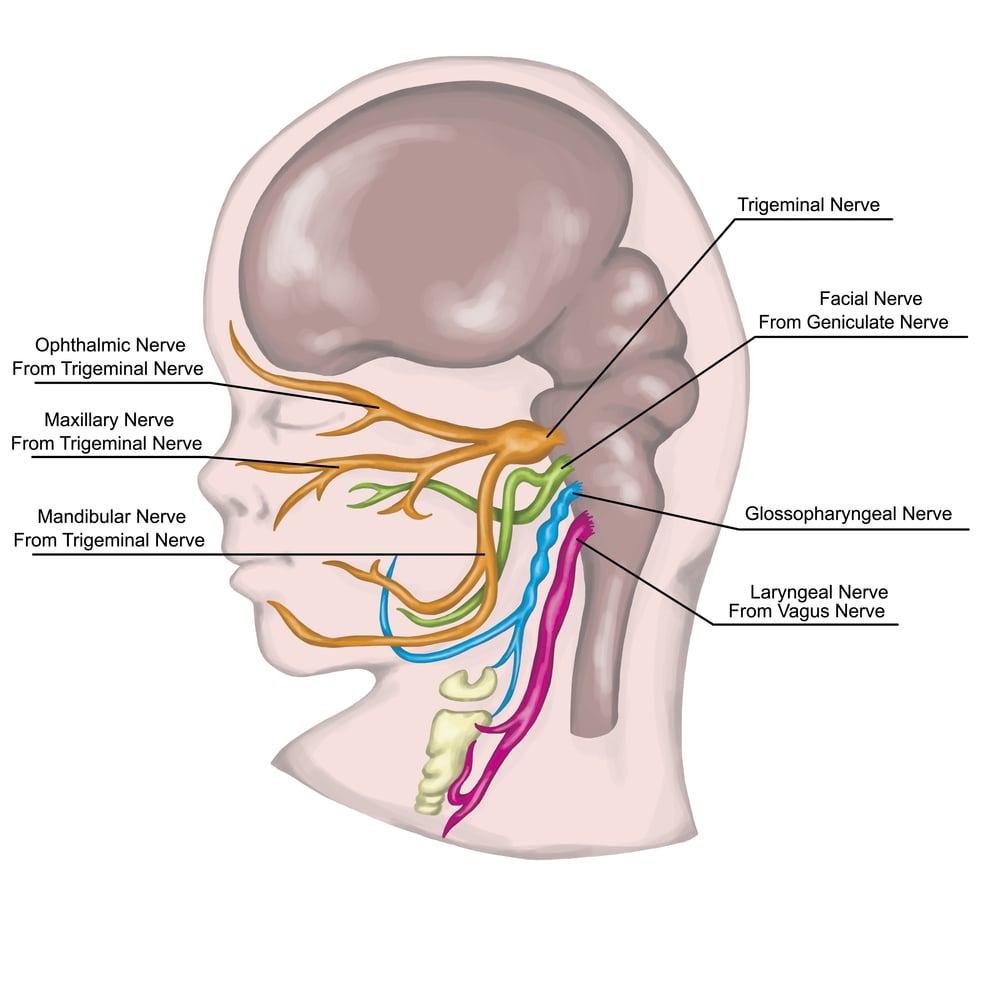 The glossopharyngeal nerve originates in the medulla oblongata and extends to the neck and throat region. (Photo Credit : stihii/ Shutterstock)

Damage to the glossopharyngeal nerve results in a loss of taste in the posterior third of the tongue, uvula deviation to the side opposite to the damage, problems swallowing and a diminished gag reflex.

The vagus nerve is the longest of the 12 cranial nerves and is responsible for a long list of functions. Just like the glossopharyngeal nerve, the vagus nerve is both sensory and motor. Some of its functions include: relay sensory information, such as pain, touch, temperature from the throat, ears, meninges and information from internal organs, including the heart, esophagus, aorta, and intestines. This nerve also controls the muscles of the pharynx, larynx, tongue and to an extent, it is responsible for speaking and swallowing. 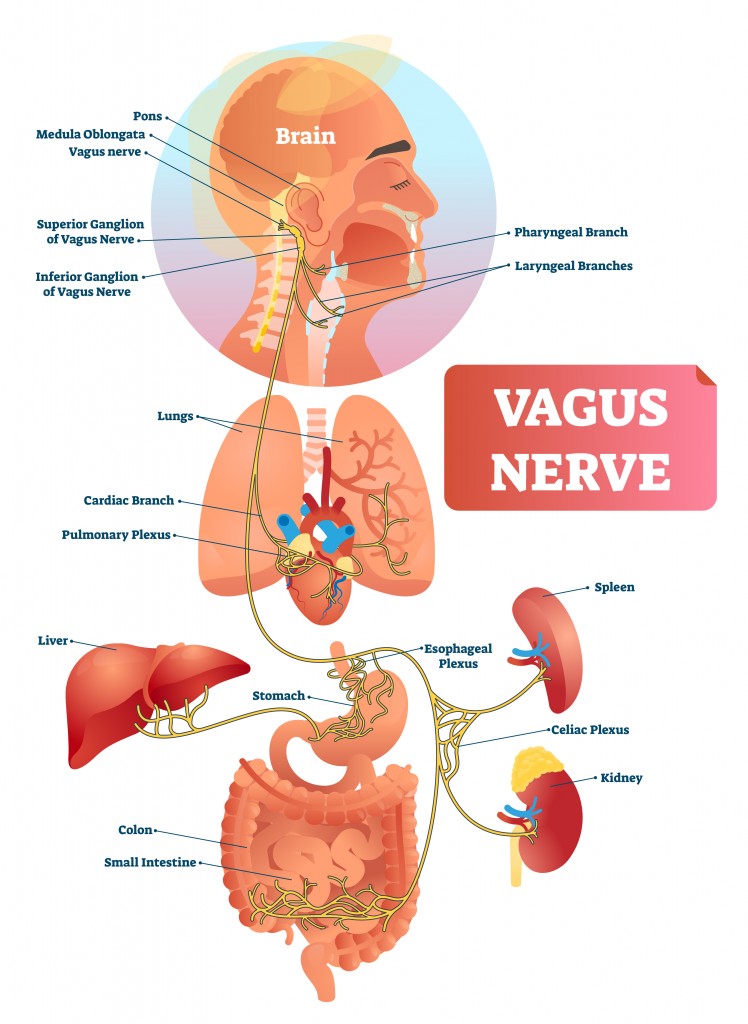 The vagus nerve arises out of a bunch of different nuclei in the medulla oblongata and travels down to different parts of the body till the abdomen. (Photo Credit : VectorMine/ Shutterstock)

As the nerve innervates a number of organs, damage to the vagus nerve leads to a variety of problems. Some of them are abnormalities in blood pressure and heart rate, gastrointestinal problems, hoarseness of voice, difficulty swallowing, etc.

The accessory nerve is a purely motor nerve and controls the sternocleidomastoid muscles of the neck and the trapezius muscles. The movements include tilting of the head, rotation of the head and shrugging shoulders. 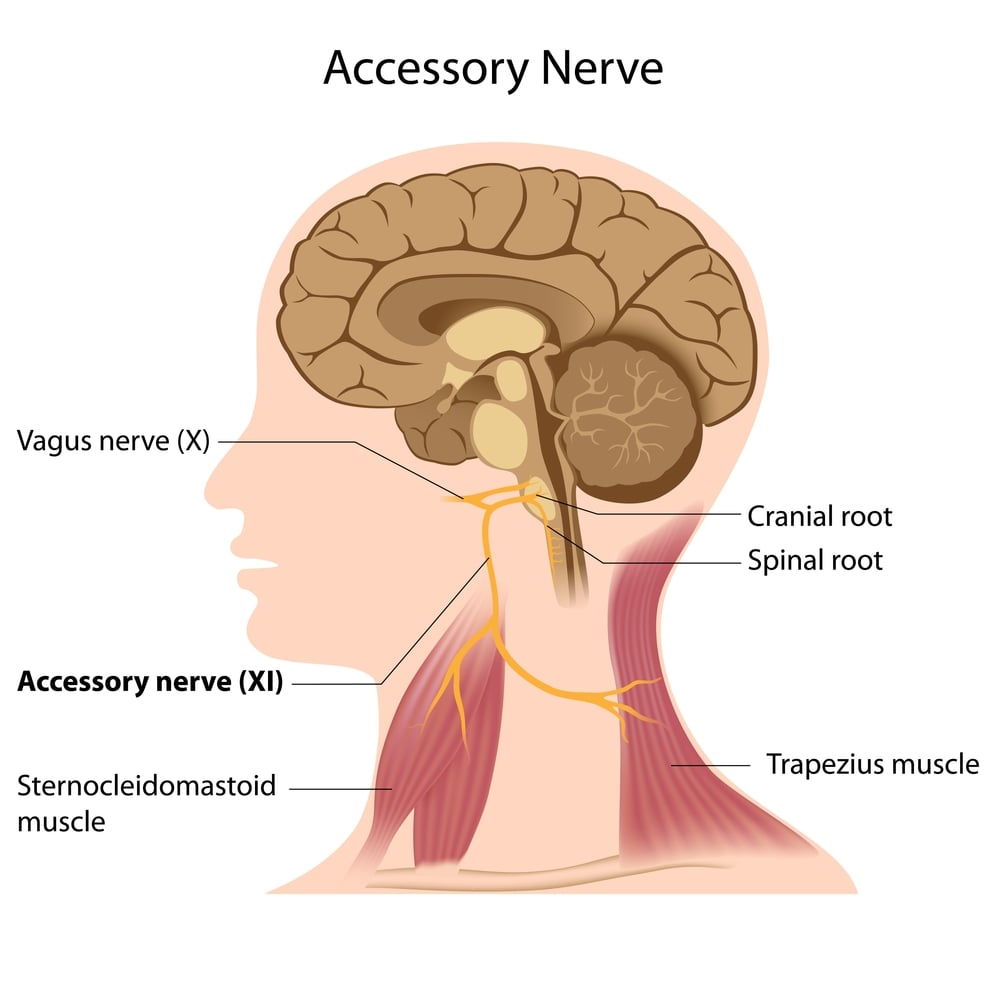 Damage to the accessory nerve causes weakness in the trapezius muscles and problems turning one’s head.

The final and twelfth cranial nerve, the hypoglossal nerve, is a motor nerve and controls the motions of the tongue. Out of the eight tongue muscles, it controls all four intrinsic muscles and three of the extrinsic muscles (palatoglossus is controlled by the vagus nerve).  These muscles are responsible for motions, such as moving the tongue side to side, sticking it out and pulling it in, and also speech and swallowing. 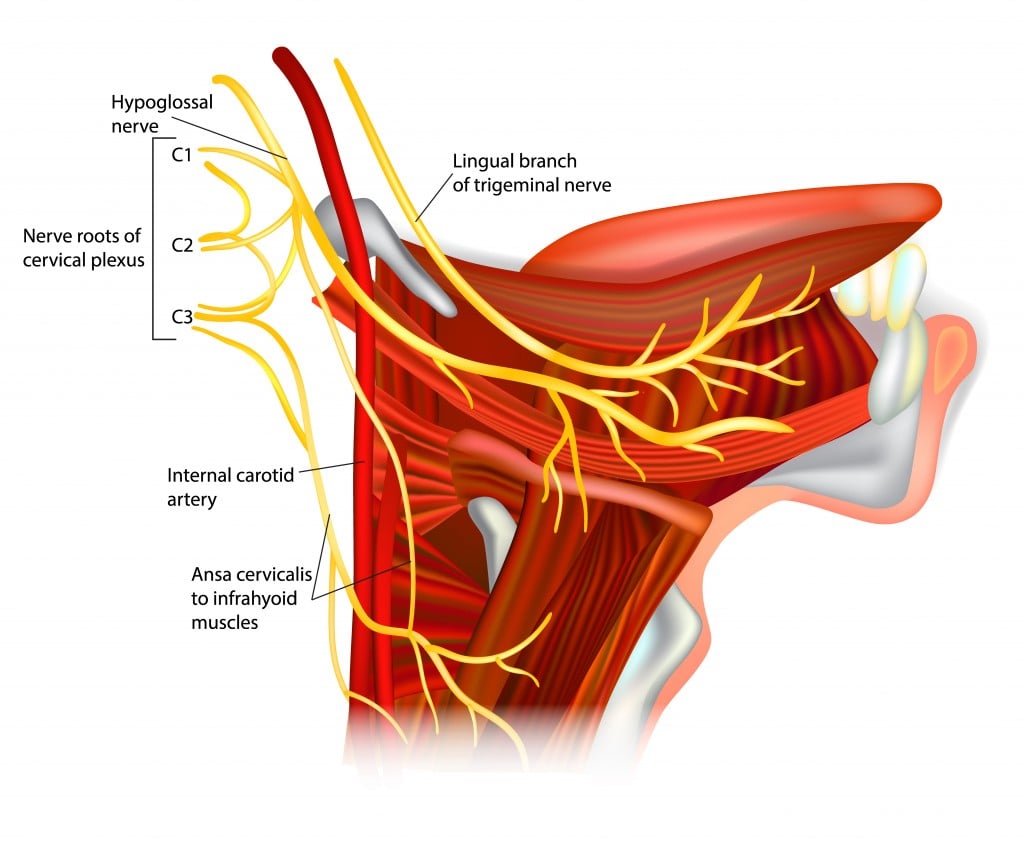 The hypoglossal nerve arises from the medulla oblongata, passes through the hypoglossal canal, down and back up the neck to finally reach the tongue. (Photo Credit : Sakurra)/ Shutterstock)

Damage to the hypoglossal nerve affects one’s ability to move the tongue and also alters its appearance.