When you smell your crush’s cologne or that stinky lunch box you forgot to wash the day before, do you ever wonder what is actually happening inside our nose? How are we able to tell the difference between these smells? And how many smells can we differentiate between? 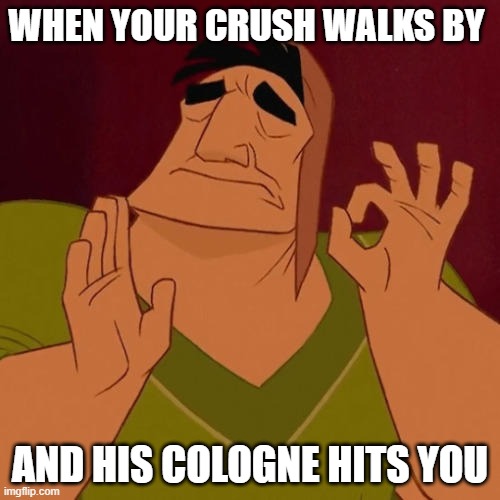 The answer to how many is an easy but overwhelming answer – 1 trillion! We humans can sense and differentiate over one trillion different scents!

Now let’s figure out the ‘how’ part, which is a bit harder to explain. To understand this process, we will follow a particular molecule coming out of your vanilla latte.

As soon as you receive your steamy cup, the molecules of vanillin, responsible for making your vanilla latte smell like vanilla, begin to mix with the air molecules. As you take a happy whiff of the latte, these molecules enter your nose, head up the nostrils, and into the nasal cavity.

In the nasal cavity, the vanillin molecules reach a postage stamp-sized area at the top of this space called the olfactory epithelium. This region consists of bundles of neurons containing olfactory receptors. The receptors bind with the vanillin and send signals to the brain, which are then interpreted that the molecule is vanillin, originating from vanilla, and that it smells pleasant.

Our ability to detect various smells lies in the complexity of the interaction between these olfactory receptors and the odorant.

Since it’s impossible to observe the receptors in a “working” nose, we have to infer how they work from indirect evidence.

So, let’s get down to some of the theories!

When a molecule locks into a receptor, the receptor sends a signal to the brain, and we therefore smell that molecule. This should mean that we have one receptor for every smell we detect.

However, we only have about 300 different kinds of receptors. It’s as though we have 300 locks, but thousands of keys that all somehow open at least one lock. 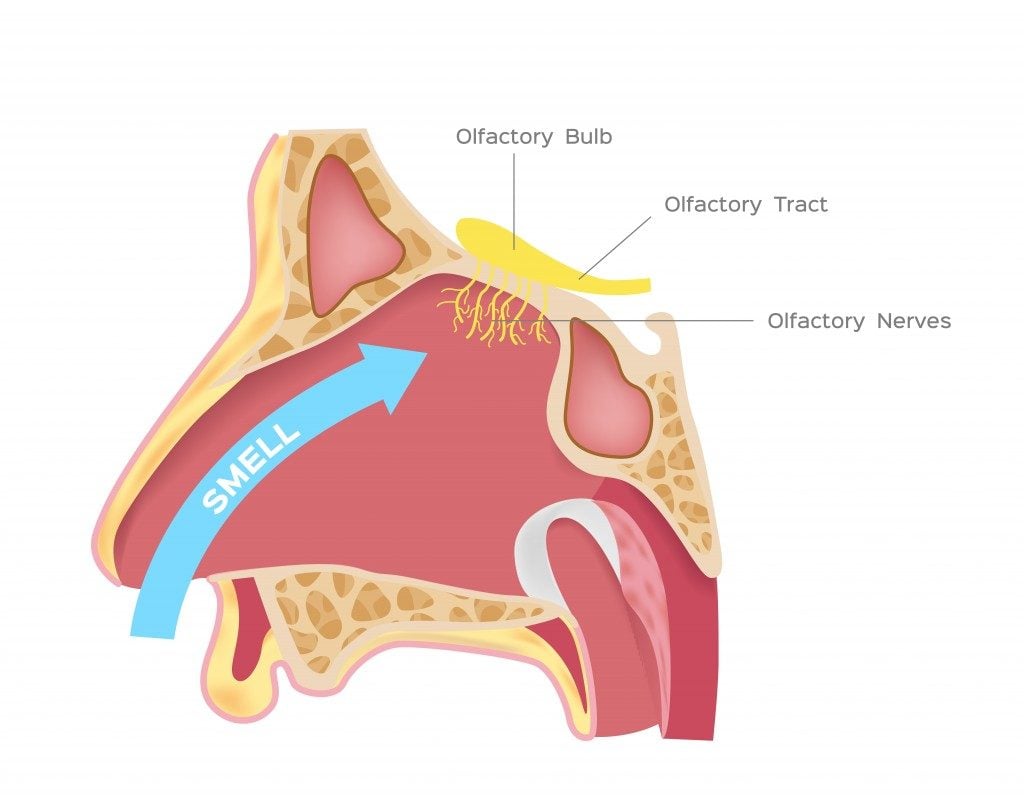 This theory suggests that each receptor is built to fit just one section of the molecule, rather than the whole molecule. We can assume that molecules with similar chemical structures (similar molecular groups) will bind to similar receptors and thus smell alike, as only the keys fitting into a lock can open it. For example, any molecule with a sulfur-hydrogen bond will smell like rotten eggs.

This theory does fit well across observations, but there are exceptions that it can’t explain. Certain molecules that are made of the same groups, but arranged differently, smell very different. For example, vanillin (from our latte) smells like vanilla, whereas Isovanillin has a nasty medicinal smell. 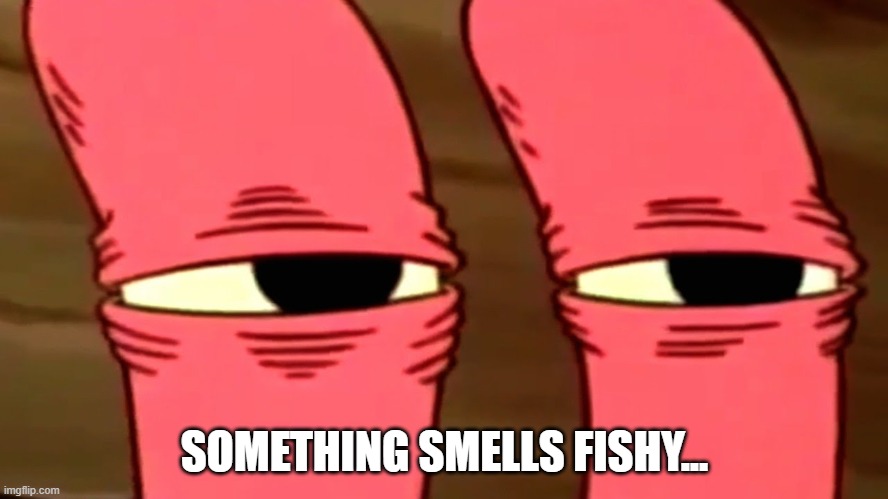 This alternative model says that olfactory receptors detect how odorants smell based on how they vibrate. Each chemical bond has a certain resonant frequency at which it naturally vibrates. This is similar to how each guitar string vibrates at a certain frequency, thereby producing a different sound. Different molecules have a different set of unique vibrational frequencies, depending on what atoms they are made of and how they are connected. This property was used by scientists in the past to understand the chemical composition of molecules using light—a practice called spectroscopy.

Spectroscopy is the process by which one can identify what atoms or molecules a substance is comprised of. Basic spectroscopy is done by shining white light through the substance. The atoms in the substance get excited and move into higher energy levels, called vibrational states. Let’s look at a kleptomaniacal atom for some perspective.

Also Read: Science Of Scent: How Do Perfumes Work? 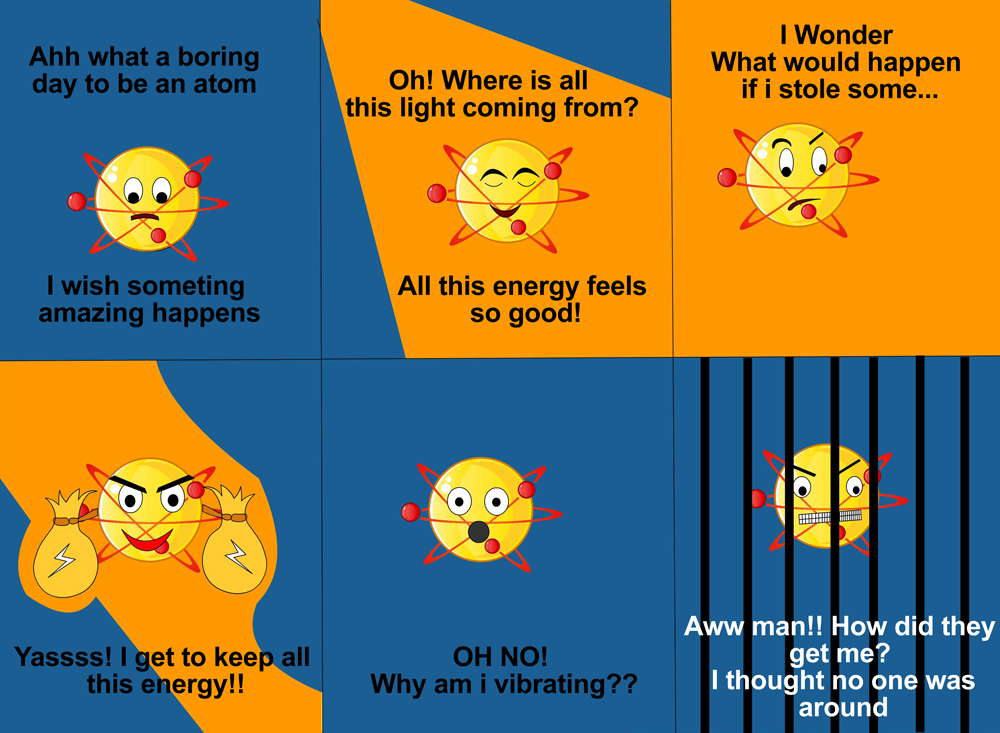 Imagine that the atom stole some light energy to keep for himself. He noticed that the light beam became smaller after he stole some of it, but he paid no heed to it. Suddenly, he started losing energy and, in no time at all, the ministry of atoms identified and arrested Dave.

Perhaps the smell receptors are doing something like this. However, for many years, the vibrational theory was discarded because there is no way our noses can perform spectroscopy, as they don’t emit radiation.

One of the key concepts in quantum mechanics is that all matter behaves as both a wave and a particle. This dual nature births many wild phenomena, one of which is electron spectroscopy. Electron spectroscopy uses electrons to detect vibrational frequencies instead of light.

What Is Quantum Tunneling?

Quantum tunneling is the phenomenon wherein quantum particles like electrons can travel to places that normal classical particles cannot. We know that if we drop a ball into a valley, classically, the ball will definitely remain in the valley. Even if there was a nice long slope to roll down on the far side of the mountain, the ball cannot get there. The ball can only reach the other side of the mountain if it is given enough energy. In other words, it would need to climb the mountain first.

However, in the probabilistic world of quantum mechanics, there is a chance that the ball can remain in the valley but also a chance that it can pass right through the valley to the low energy state on the other side. 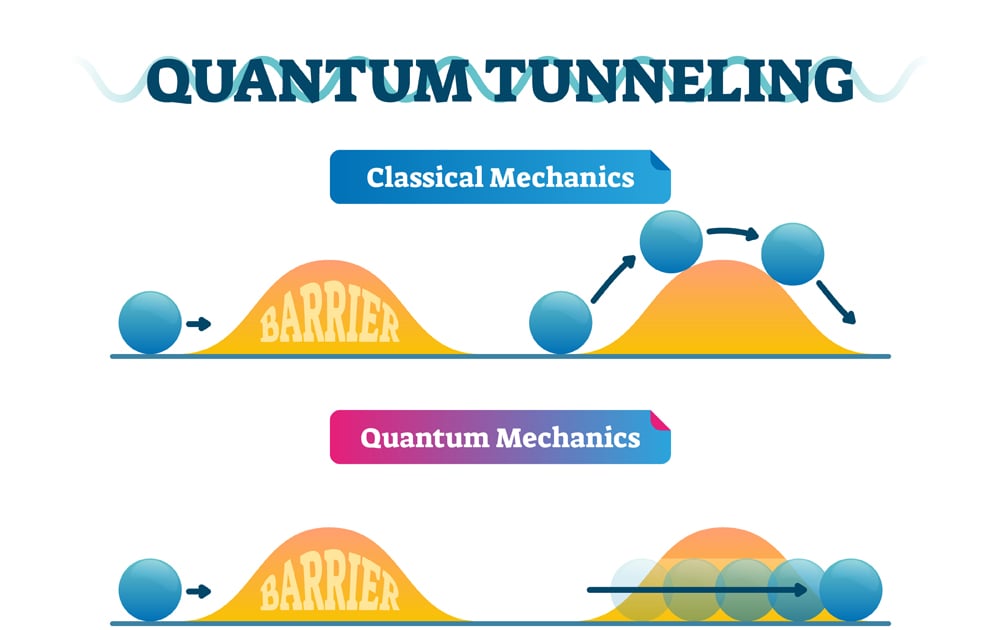 Simply put, this means that quantum particles can travel through walls!

How Quantum Tunneling Can Be Used In Spectroscopy

The resonant frequencies of molecules can be found using electron tunneling. For example, imagine that we take two metal rods and separate them by a small barrier, then apply a voltage to make an electron get pushed to one side.

Normally, in classical physics, the electron can’t pass this barrier, but if the gap between the rods is very small (on the order of a few nanometers), it could quantum tunnel to the other side.

When we introduce a molecule into the gap, something very interesting happens. If the energy difference between the electron and the hole is the same as the energy needed to vibrate one of the resonances of the molecule, then the electron can tunnel across, and it drops the extra energy into vibrating the molecule as it passes. 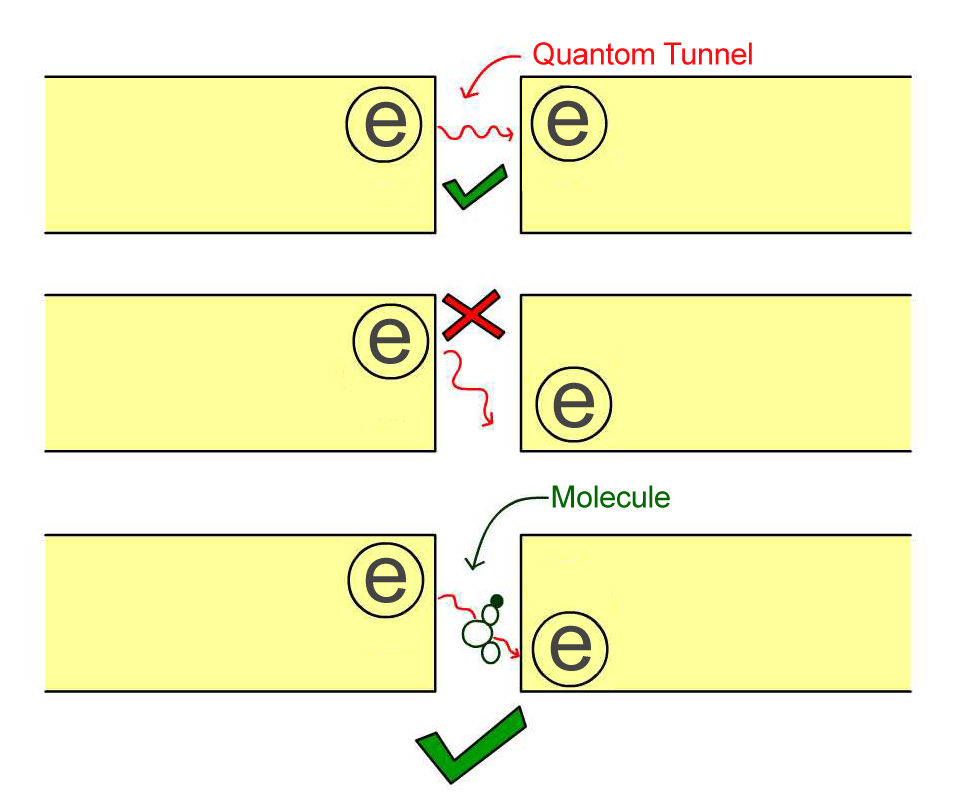 This theory suggests that our nose is doing exactly the same thing!

Our smell receptors are behaving like that metal rod and the gap, simply waiting for an odor molecule to come in that allows an electron to tunnel across the receptor, and trigger the particular nerve corresponding to that energy.

This theory essentially says that the smell of a molecule depends on its vibrational frequency, so if you could change the frequencies of the molecule, you can also change its smell. To gain evidence in support of this idea, scientists took a molecule and replaced all its hydrogen atoms with deuterium atoms, a heavier form of hydrogen that has one proton and one neutron in its nucleus, instead of just one proton. It has all the same properties as of hydrogen, except that it is heavier, which gives it a different vibrational frequency. Upon testing over various species and humans, they concluded that the two molecules did, in fact, smell different.

As successful as this model is, it still cannot explain everything. Chiral molecules are molecules made of all the same atoms, but are arranged as mirror images of each other. For example, Carvone, an organic molecule with formula C10H14O, has a left and right form.

Since both the right-handed and left-handed molecules are made of identical atoms and bonds, they have the same vibrational frequency. Thus, they should smell the same, but they don’t. One form smells like Spearmint while the other smells like caraway seeds!

We won’t know for sure until we figure out a way to observe the receptors in action. Even so, it is fascinating to see how quantum mechanics—as absurd as it is—plays a role in the daily functioning of our bodies. It may be hard to wrap your head around the fact that something as simple as smelling a flower involves quantum mechanics, but there’s a strong probability it does!

Ananya is pursuing an Integrated MSc degree in Physics from BITS Pilani (India). She loves playing football; her hidden talent is doing cartwheels in high heels. She is amused by quantum mechanics and wants to find reasons to the crazy way the world works.