The corpus callosum is a part of the brain that connects the two hemispheres. It is vital for communication between the hemispheres; injury to it can cause varying levels of impairment in mental and physical abilities.

Our brain is the most complicated object we have encountered in the universe. It is powered by 86 billion neurons, yet uses just 20W of energy to get through the day. This 3-pound gooey organ sitting inside your skull is responsible for your upkeep; from the day you are born until the day you die. It stores your memories, develops your personality, and helps you read and understand what I’m currently writing; it is the container for every thought you have and is the processor of your interactions with the environment. 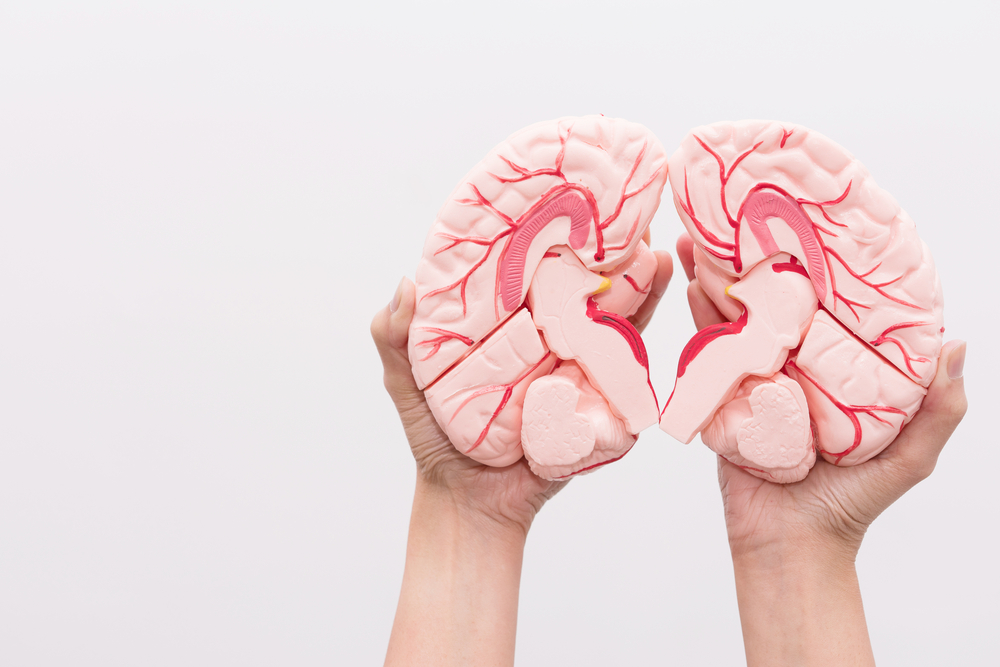 The brain is at the helm of our body. (Photo Credit : Bangkoker/ Shutterstock)

Understandably, this complex piece of machinery is divided into many different parts, which are responsible for all the varied things we do. The design of the brain is a testament to evolution, as higher functions and parts of the brain continually developed as animals evolved into higher levels of cognition.

Our brain is divided into two hemispheres. Each hemisphere has its own specific purposes and tasks, but many functions are dependent upon efficient communication between the hemispheres. The part of the brain that connects these two hemispheres and helps facilitate communication between the two is the corpus callosum. It is a very integral part of the brain, so damage to this region can cause severe impairments. Let’s take a look at the connector of the two sides of the brain and the consequences if it is underdeveloped or damaged. 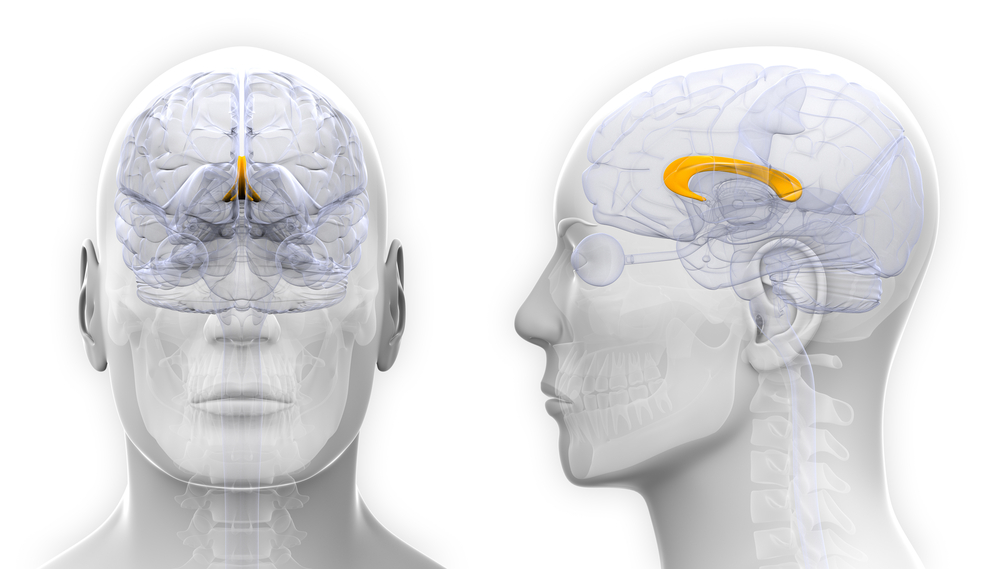 The Connector of the Hemispheres

The corpus callosum is located beneath the cerebral cortex in the brain. It is a thick and wide nerve tract, which consists of a flat bundle of commissural fibers. The corpus callosum is a peculiar occurrence only found in placental mammals, meaning mammals that carry their fetuses in their wombs until a relatively later stage of development. It is 10 centimeters in length and consists of 200-300 million axonal projections, making it the largest white matter structure in the human brain. The corpus callosum will form in the brain after 12-16 weeks after conception, and again near the end of the third trimester. It finishes developing completely once a child reaches the age of 12 years.

The corpus callosum is the connector between the two cerebral hemispheres; it forms the floor of the longitudinal fissure, which is the deep groove that separates the two hemispheres. The corpus callosum consists of four main parts; these are the individual nerve tracts connecting different parts of the two hemispheres. These parts are the rostrum, the trunk or body, the genu, and the splenium. The isthmus is the narrow part between the trunk and the splenium. Location of the corpus callosum in relation to other parts of the brain (Photo Credit : Blamb/ Shutterstock)

The front end of the corpus callosum is called the genu (“knee”), which is located towards the frontal lobes. The genu is in front of the septum pellucidum, tapering in thickness as it curves backward and downward. The thin part as the genu tapers is called the rostrum, which stretches to the optic stalk. The end of the corpus callosum is called the splenium, which is is found towards the cerebellum. It overlaps with the tela choroidea of the third ventricle and the midbrain. It ends in a thick, convex border.

The fibers on either side of the corpus callosum radiate throughout the white matter and pass the various parts of the cerebral cortex. The main body of fibers extends laterally on either side into the temporal lobe and covers the central part of the lateral ventricle; this is called the tapetum. The function of connecting the left and right temporal lobes is shared by the tapetum and the anterior commissure.

Myelin is the fatty substance that surrounds nerve axons in a neuron insulate, which increases the rate at which information is passed. The process of myelination is believed to occur until a person’s 30’s, although it peaks in the first decade of their lives. The density of fibers in the sub-regions, the size, and the amount of myelination relate to the functions of the brain regions to which they are connected. Thick and fast-conducting fibers connect the motor and visual areas. Thin, lightly myelinated fibers conduct slowly and are connected to prefrontal and association areas. 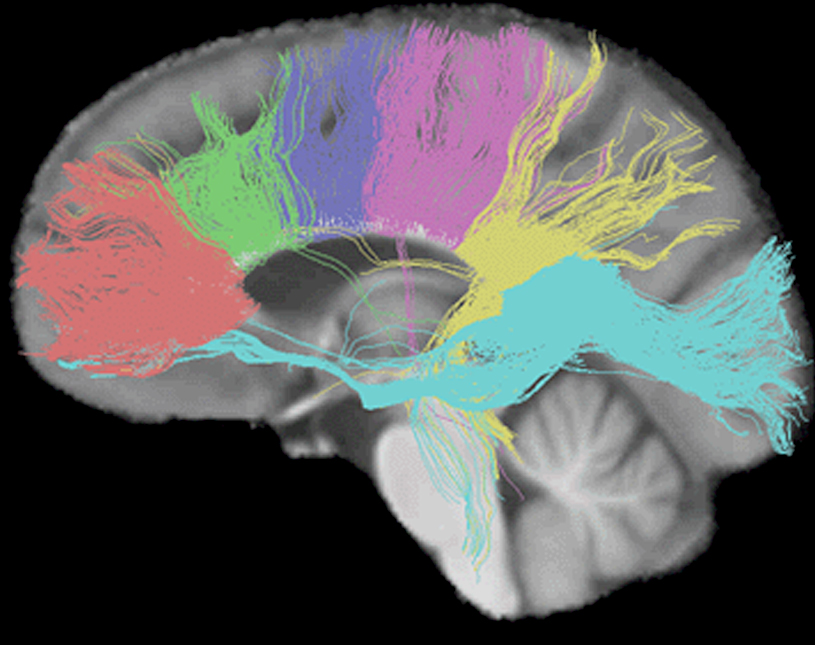 In a tractogram of the brain, the connections from the corpus callosum to various parts of the brain are seen in distinct colors. The fibers from the genu are seen in a reddish hue, fibers towards the premotor are in green, the sensory-motor fibers are purple, the parietals are pink, the temporals are yellow and those of the splenium are blue. The somatosensory (neurons that respond to changes on the exterior or interior of the body) information moving between the two halves of the parietal lobe and the visual cortex is communicated by the splenium.

The corpus callosum is important for communicating information between the hemispheres. As seen above, it plays an important role in integrating and processing cognitive, motor and sensory information.

These functions can be affected when the corpus callosum is not properly formed, or in some cases, completely absent. Depending on the condition of the individual, the impact of this deformity could be subtle or severe. Research is being done to understand the various impacts of the disorder, as well as the differences and similarities between the following types:

The potential causes of these conditions range from injuries, toxic exposure, structural blockages (cysts), genetic factors or chromosome errors, metabolic disorders or other unknown factors. These abnormalities can be diagnosed via a CT scan or an MRI.

Some of the people diagnosed with one of the above conditions may be physically healthy and could have typical intelligence, but will show signs through subtle, yet significant symptoms. Those who are chronically suffering from a more serious condition could display additional brain abnormalities or medical and physical conditions that have a negative impact on their health and development to varying degrees.

A person suffering from such conditions could display the following characteristics:

The disorders of the corpus callosum are a lifelong condition. Early intervention can help individuals, but continued therapy is required throughout their life. Research is being carried out to better understand the causes and impact of the impairment to the corpus callosum; this will enable families and professionals greater access to additional knowledge that would improve the lives of patients through more targeted support and intervention.