In pictures of Earth, we can’t see satellites or other objects orbiting the Earth because they are too small in comparison to Earth. Earth is too big for these objects to be visible in the same photograph.

We are often contacted by our readers with questions whose answers seem incredibly obvious. Posts like “Where does sugar go after being dissolved?“, “What is the ISS?” or “Where do fish come from in newly formed ponds?” are just some of the many articles that were attempts to answer such questions.

A few days ago, a reader wanted to know the answer to yet another seemingly basic, but very interesting question – why don’t we see any satellites in the numerous pictures of Earth taken from a great distance? If you’re not clear what we’re talking about, go ahead and look up ‘pictures of Earth’ on the Internet. To make it even more convenient for you, I’ll just put a collage of some pictures of Earth right here: 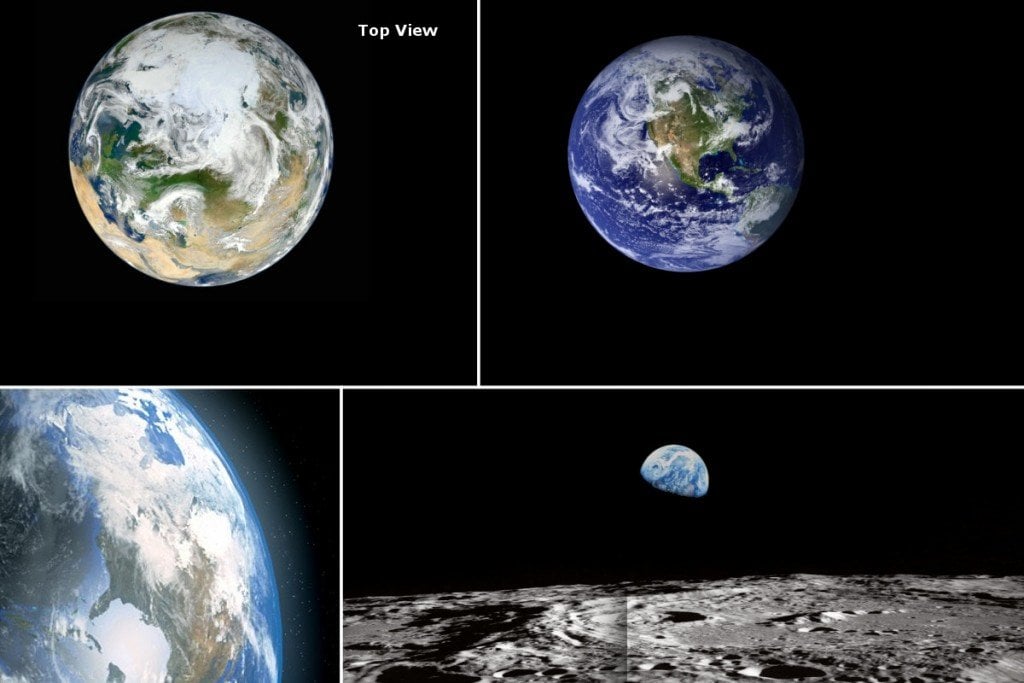 Do you see any satellites in any of them?

If you really think about it, it’s actually quite a valid question. I mean, there are a few thousand satellites orbiting the Earth, and these are just the man-made ones. If you consider every object orbiting our planet, the number would be much higher. There are about 21,000 objects (larger than 10 centimeters) and about 500,000 or so smaller pieces of orbital debris spinning around the Earth right now.

Why don’t we see any of that in our numerous pictures of Earth?

Short answer: The Earth is too big and these objects are too small in comparison to be visible in the same photograph.

First, let’s briefly take a look at the number of ‘space objects’ circling our planet.

There are thousands upon thousands of objects spinning around the Earth. Some of them are very small (i.e. less than 10 centimeters across) while others are quite huge, relatively speaking.

Let’s briefly talk about the numerous man-made objects around the planet. Take the ISS, for example. 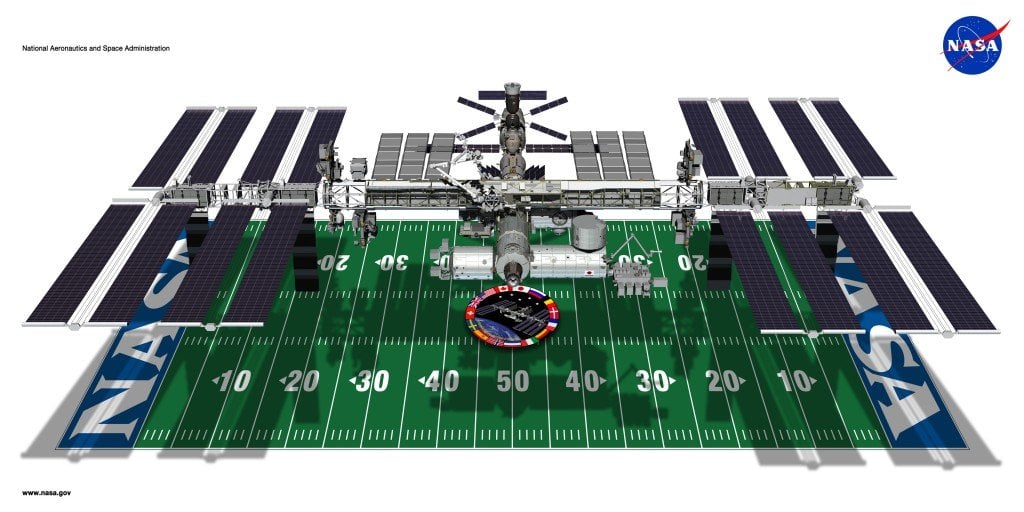 It’s approximately 109 meters (356 feet) by 73 meters (240 feet). To put in perspective, it’s slightly larger than a football field. This is the largest (and also, the costliest) man-made object currently orbiting the planet. Apart from that, there are thousands of man-made objects, including the Hubble Space Telescope, Astrosat, NOAA 18 and many other Earth-observation satellites constantly spinning around the Earth. 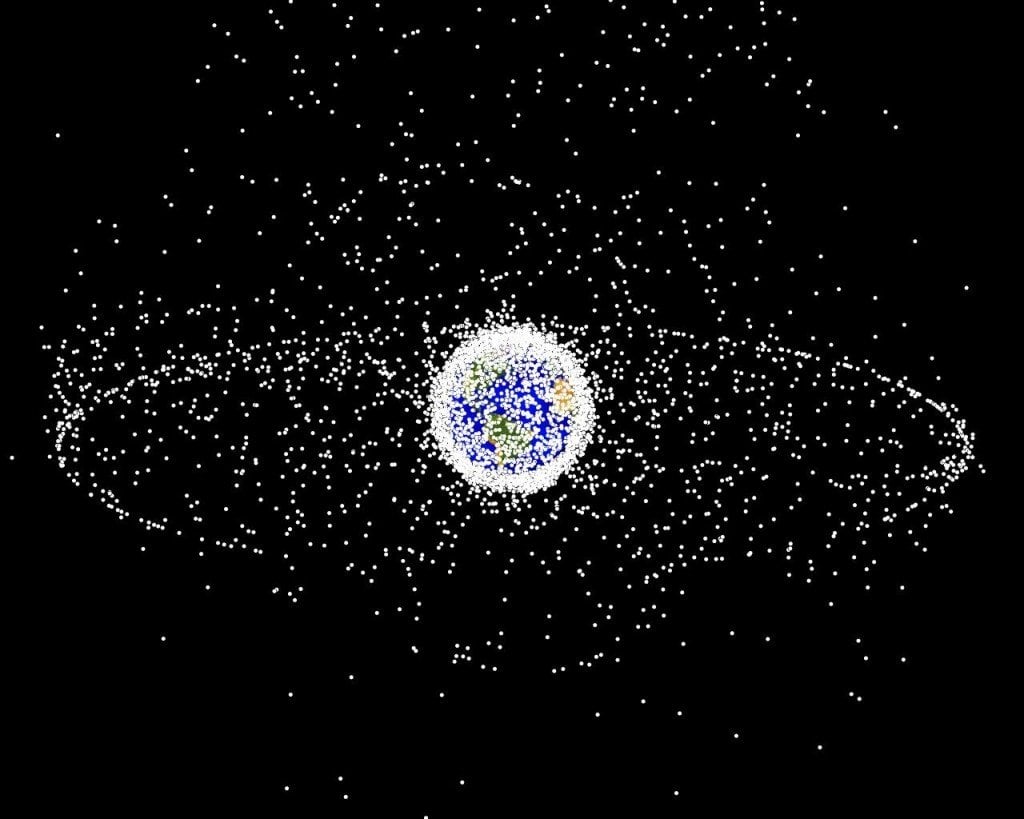 Note that these are only the currently operational ones; there are a number of defunct satellites up there too that cannot be repaired. They’re basically going to have to stay up there until they gradually lose altitude and burn up in the atmosphere. These types of satellites add up to a huge amount of space junk, which is a big cause of concern for future space flights.

Apart from man-made satellites and space junk, there are also tens of thousands of celestial objects circling the planet. Such objects have sizes ranging from a couple centimeters to a few feet.

There’s one singular takeaway from all of this – there are a LOT of objects circling our planet.

Why are satellites and celestial objects not visible in pictures of Earth?

The answer is pretty straightforward – it’s because Earth is very, very big. It’s hard to say why, but people generally tend to underestimate the sheer enormity of our planet. Our planet is HUGE, in the real sense of the word. In comparison, the objects that orbit the planet are – for the lack of a better word to denote minuteness – puny.

Take the ISS – the biggest man-made object currently spinning around the planet – for example. It has a surface area of around 2,500 square meters or 0.0025 square km, which is almost equal to the size of a 6-bedroom apartment. (Source) In contrast, the surface area of the Earth is 510.1 million km squared. (Source). We can now calculate how many ISS’es would it need to completely cover the Earth’s surface by applying simple arithmetic. 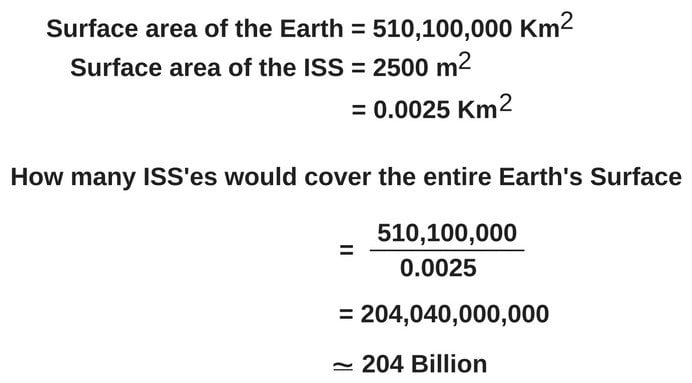 So, it would take 204 billion ISS’es to entirely cover the planet! To have some idea of what this means visually, take a look at this picture: 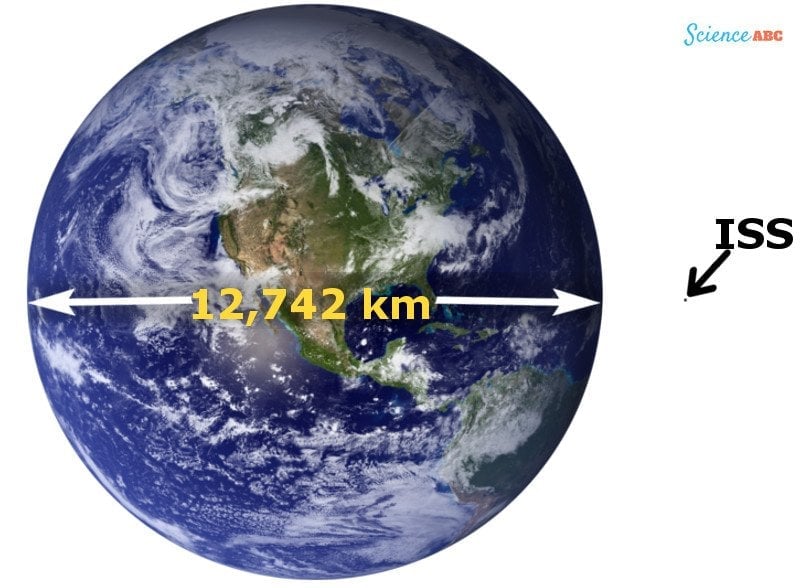 A comparison between the size of Earth and the ISS (the biggest man-made satellite in space). (Note: The distance between these two is not to scale).

Note that the pictures of Earth do have satellites in them; however, they’re too tiny to be resolved in the image. Most images of our planet are only a few thousand pixels in diameter; so unless an object is of the order of a kilometer or more (which no object in the vicinity of the planet is), it would only be a fraction of a pixel, and thus invisible in the image. Furthermore, many satellites and a great deal of space debris are above the altitude of the ISS (which clicks a lot of pictures of our planet), so it’s not going to capture an enormous number of objects in the picture anyway, since they’re not there in the first place!

However, there are occasions when you can see a satellite in an Earth-picture, but it would be too small (yes, “magnifying glasses-small”), and practically indistinguishable from the stars in the backdrop.

So, if someone asks why they can’t see satellites in the images of Earth, ask them why a picture of their house doesn’t show the two dozen flies nearby, or why a full-body picture doesn’t show the huge number of bacteria and germs living on their body. Hopefully, that will help them understand!