Fish either reach new lakes and ponds through external help, or the creatures stay there, survive the period of drought, and then thrive again when water is plentiful.

The other day, I was sitting at the edge of a small pond in a park, peacefully watching fish and other tiny aquatic animals wading and drifting in the water. Out of nowhere, a question popped into my head: Where did all these little guys come from?

I assumed that the fish in this pond must have had a lot of human help to propagate their species and populate the pond, but that did not really answer the question because how do you explain the presence of aquatic animals in new water bodies, especially small ones situated in the middle of nowhere? 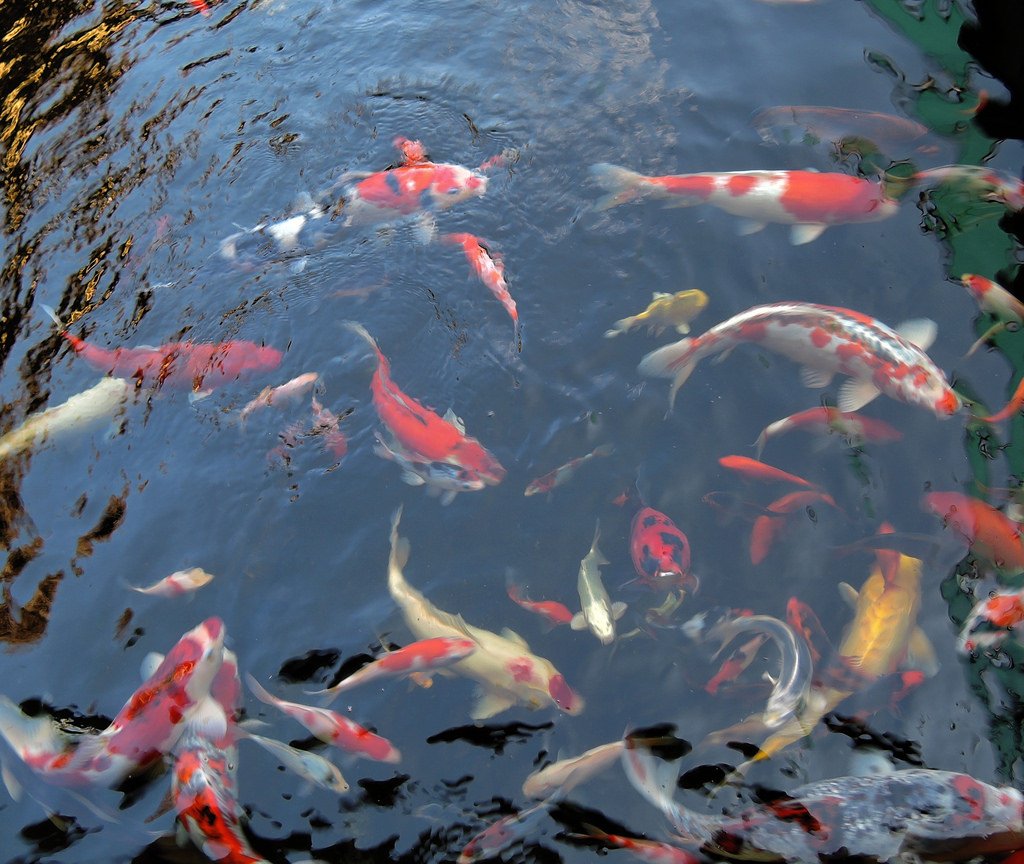 How do so many fish populate newly formed or isolated ponds? (Photo Credit: Flickr)

There are certain places that have large pits or depressions that have turned into ponds following heavy rains or flooding in the region. If you have ever observed such a type of water body, you have probably noticed that fish start to appear in these ponds as if by magic! Since there were no fish in the pond before, considering there was no pond before, where do fish come from?

A similar case occurs with dry ponds. When a pond dries up, and its aquatic inhabitants consequently die, how can it suddenly house more small creatures when it fills up again?

Fish reach new/replenished pounds in three main ways: they are already there, they get there naturally, or they have some external help getting there.

When fish are already there

This may sound a bit unbelievable at first, but it is true. Fish and other aquatic creatures may already be living in a fresh pond (or one that refills after being dry for a while), but you may not see them until some time after their formation.

There are species of aquatic organisms that lay eggs capable of surviving long droughts and only hatching when conditions are favorable. For instance, algae leave spores that can survive for long periods of time. Certain species, such as the very odd African killifish, dig deep into the mud of a pond and lay their eggs there. The eggs lay dormant until the pond is replenished, and at which point they come out again, reproduce and propagate their species in the newly formed water body.

American alligators create their own ‘gator holes’ by digging up vegetation and the mud. These holes are filled with water during the dry season (due to the alligator caring for the hole) and it becomes a safe haven for aquatic life.

When fish are delivered naturally. 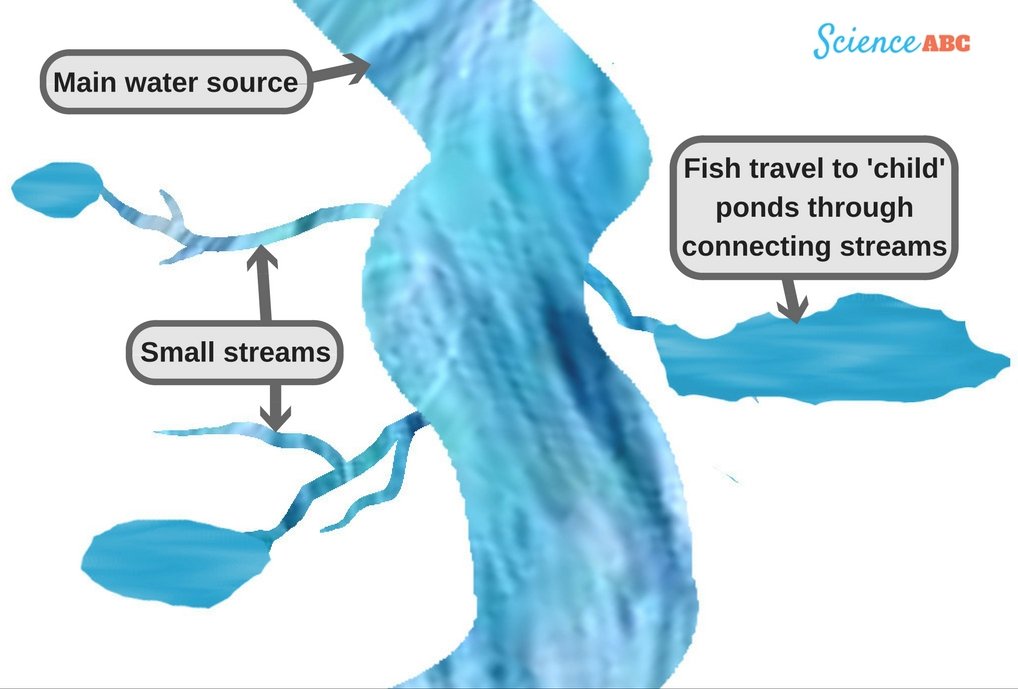 A piece of land could have the same drainage system causing different water bodies to share the same water and its inhabitants.

A piece of land could have the same drainage system, whereby different bodies of water share the same water and its inhabitants.

Many lakes and ponds are formed by larger water bodies like rivers and the sea. If, for example, a river floods, its water might ‘spill’ over its natural boundaries and accumulate in a low-lying area, creating a small ‘child’ water body. Fish and other aquatic creatures could enter this small lake through the same streams that act as a “liquid highway” between the parent river and the newly formed lake.

In many cases, a piece of land shares the same drainage system with many other water bodies. Therefore, many lakes and ponds that seem unconnected when the water level is normal are actually connected in different ways; thus, they contain essentially the same water.

When fish get there with external help

While most aquatic creatures travel to newly formed water bodies through one of the above mentioned methods, there is another method (also the most exciting one) of migration that fish use: through the help of birds, land animals, and humans. 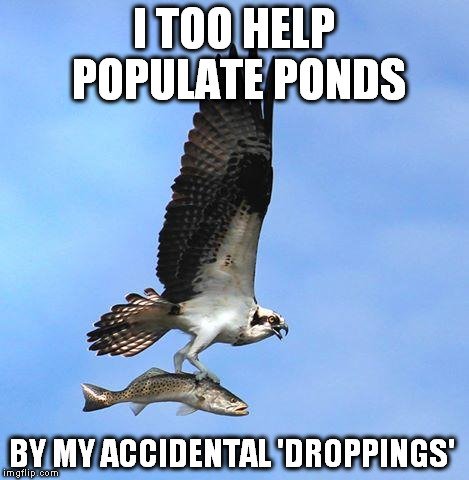 Through the help of animals

For example, when a bird drinks water from a pond, the eggs might stick to its feathers/feet. When it flies off to a newly formed pond nearby, which is also a new abode for many of its mates, the same eggs might uncouple themselves from their host and eventually populate the new pond. But a 2018 sutdy found that, though this is a wide spread belief, even among scientists, there isn’t any solid emperical evidence to back this up.

A 2019 study found that killifish eggs are migrate across waterbodies via the gut of the waterfowl which are birds like ducks and geese. When the bird attends its call of nature, the eggs are dropped in this new location. A 2020 study found the fishes common carp and Prussian carp’s eggs survive through the gut of a mallard. The eggs when on to hatch and the fishes survived. 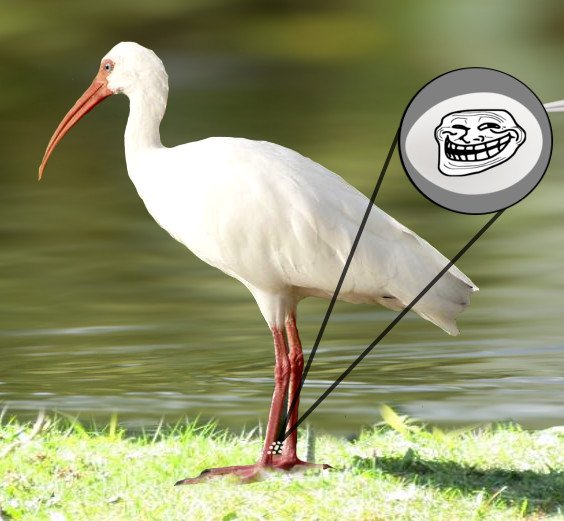 Eggs hitch a ride on the body parts of birds and land-based animals without the latter even knowing about it.

The same happens in land animals, whose feet and fur could house the eggs of aquatic animals for the journey between two ponds.

Through the help of humans 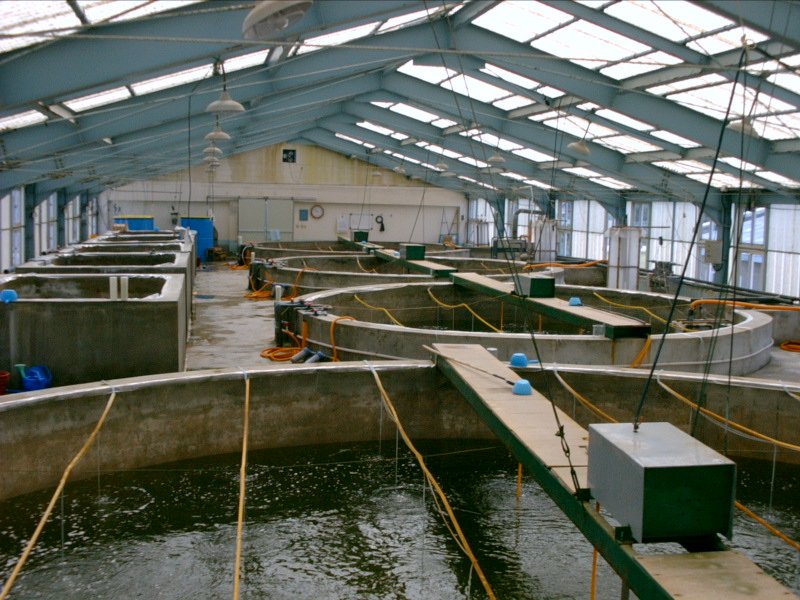 Humans play a crucial role in populating ponds by actively / passively introducing selected species of aquatic animals into them. There are dedicated fish farms and hatcheries where certain fish populations are reared and then released into water bodies that require a population boost. Trout is one of the most commonly introduced fish through active human efforts, which explains how a small pond in a person’s backyard can have a thriving fish population.

Sometimes we release fish into a new water body by carrying them on the bottoms of our boats or other water sporting gear. Then there are also fish lovers who, at times, release their pet fish into new water bodies. 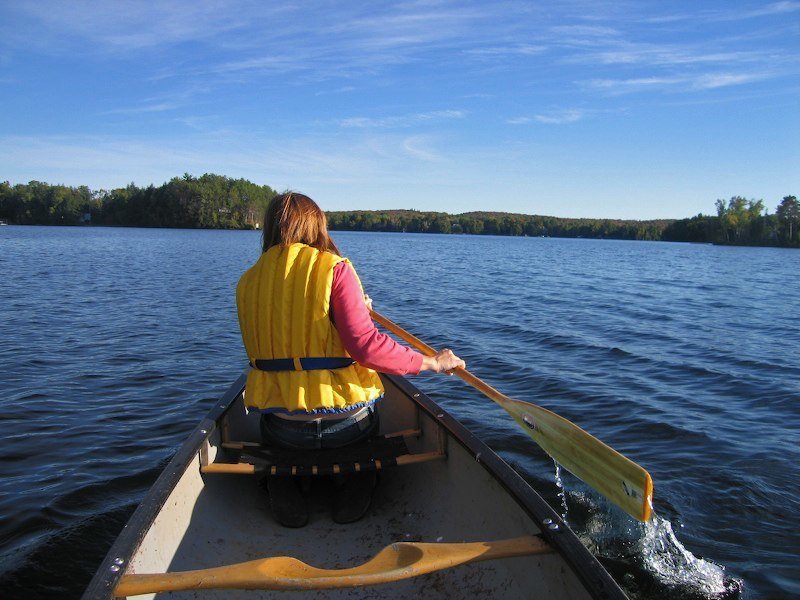 There are also times when we unintentionally seed a water body by carrying fish roe on the bottom of our boats and other water gear. (Photo Credit: Wikimedia Commons)

Regardless of the size of a pond, its newness, or apparent isolation from other water bodies, the appearance of fish and other aquatic organisms can be attributed to one of nature’s many maxims: life always finds a way!

Do you remember how fish end up in ponds?