Fish don’t have to worry about getting thirsty because they live in water and can absorb water through their skin and gills. Seawater fish drink water to avoid dehydration, while freshwater fish don’t drink water because they have a higher salt concentration in their blood than in the water they are surrounded by.

Freshwater fish don’t actively drink water by their mouth, because if they do, they run a high risk of having their blood diluted. However, seawater fish actively drink a lot of water to keep themselves hydrated at all times.

Humans, for the entirety of their lives, are constantly dependent on a few ‘tangible’ things; in other words, humans cannot possibly survive without a handful of things. Water, undoubtedly, is one of the most crucial of these human necessities.

Regarding our absolute dependence on water for survival, have you ever wondered if other creatures share this aquatic dependency? For the scope of this article, let’s narrow down the category of ‘creatures’ to creatures that are surrounded by water all the time – fish.

This may sound a bit strange, but do fish get thirsty too?

This question is interesting because it involves the term ‘thirst’, which, in the most basic terms, is the urge to drink water. Humans show this desire in varying degrees (you can be just a little thirsty or I-can-gulp-the-whole-barrel-down thirsty). This drive to drink water is humans’ way of making sure that a healthy balance of water and salts is maintained inside their body.

Not only humans, but all animals living on land, are faced by the threat of dehydration, and therefore drink water. In other words, these animals drink water when they feel thirsty.

Thirst is an altogether different thing when we’re talking about creatures that dwell in water for the vast majority of their lives. Think of it this way: how would you ever feel hungry if you lived inside a pizza? Similarly, how can fish feel a strong urge to drink water (or be thirsty) when they are practically surrounded by water all the time?

However, it’s not as simple as that. Both freshwater and seawater fish show different behaviors when it comes to actively drinking water. This is further related to the anatomy of their bodies.

Freshwater fish (those fish living in fresh water, which doesn’t have a high salt content, like seawater) have blood with a higher concentration of salt than the water they are surrounded by. Therefore, they run a high risk of having their blood diluted if they drink water. This is why they don’t actively drink water to maintain the balance of salt and water inside their bodies. Instead, they absorb water through their skin and gills by the process of osmosis, and then urinate a much more dilute mixture to get rid of all that excess water.

Since the salt concentration in the blood of seawater fish is lower than the water they are surrounded by (since seawater is highly saline), they are constantly threatened by dehydration, so they actively drink water. 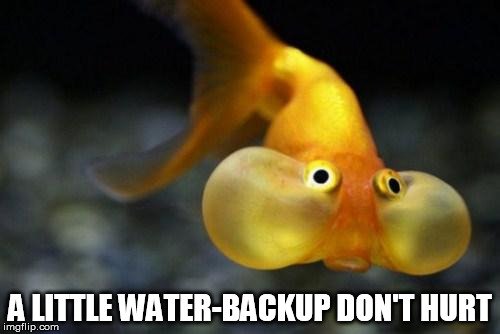 Thanks to the impressive design of their gills, they can drink saltwater, process it and then eliminate the excess salt through excretion.

Do Fish Ever Get Thirsty?

They actively drink water, yes, but do they get thirsty? According to current thinking, probably not. 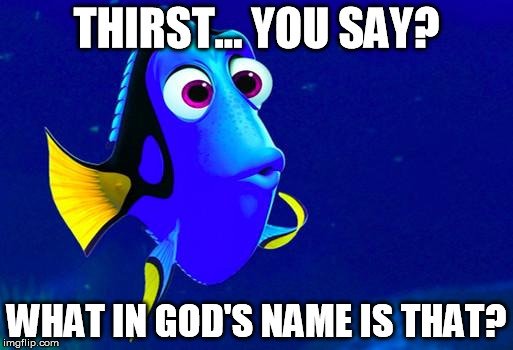 There are two reasons behind this; first, unlike land mammals who have to seek endlessly for water in order to stay hydrated, fish basically live in water, so they don’t really feel that strong of an urge to drink water. The other reason is that thirst, in fish, is more of a reflex that occurs without requiring a conscious decision on their part (unlike humans); it just happens. They don’t necessarily have to feel thirsty in order to drink water.

Well, isn’t that a nice for fish? They don’t have that incredible urge to chug water after a rigorous round of exercise, or after walking across town on a hot, sunny day. One less thing to worry about!