When sugar is mixed in water, the intermolecular forces that are holding the sugar together are weaker than the forces of the water molecules. The water molecules surround the sugar and pull it apart into the solution. Stirring the mixture helps to dissolve the sugar faster by bringing more particles in contact with the water.

I recently found myself at a child’s birthday party surrounded by a dozen kids having an absolute blast (and admittedly, giving the hosts a hard time). It just so happened that while I was eating my fair share of cookies, I found myself beside a couple of kids who were talking about the sugar that had been added to their juice. They were wondering where it had gone, because it seemed to magically vanish after stirring it.

I wanted to tell them that the sugar disappeared because it dissolved. Obviously, all of us know that when sugar is mixed in water, it quickly disappears after stirring the liquid for a moment or two. The question cannot be completely answered just by saying “because it dissolves”, along with an eye roll and a shrug.

So, let’s get down to the bottom of this. Where on Earth does the sugar go after being dissolved?

Forces that hold the constituent particles together

The physical state (or phase) of any matter is determined by the forces that hold its constituent particles together, i.e., its intermolecular forces. Take solids, for example. The constituent molecules that make up solids are held together by strong intermolecular forces in a rigid structure (a lattice). This imparts a number of physical properties to solids, including strength, rigidity, incompressibility and others.

Arrangement of constituent particles in solid, liquid and gas

In liquids, the intermolecular forces are weaker than solids, which is why liquids don’t have a definite shape of their own. Instead, they take the shape of the container in which they’re kept.

Being a solid (and thus having a lattice structure), a sugar cube’s shape and appearance are attributed to the strong attractive forces that hold its constituent particles together. However, when the cube comes in contact with water, these forces are meddled with and the cube loses its shape, quickly disintegrating.

You see, a sugar molecule consists of hydroxyl groups (OH) that readily make hydrogen bonds with the water molecules surrounding them. Now, one thing you should know about hydrogen bonds is that they’re very strong.

In fact, they are one of the strongest intermolecular attractions in nature, only weaker than ionic and covalent bonds. These bonds are also stronger than the intermolecular forces holding the molecules in the lattice shape of the cube. As a result, the water molecules surround the tiny sugar cubes, knock them free from the attractive forces of the surrounding molecules and pull them into the solution. This process goes on for a while (depending on a few factors, such as the temperature of water, saturation, stirring etc.) until the cubes diffuse and finally disappear after fully separating from the main structure.

Why does stirring help to dissolve sugar faster in water? 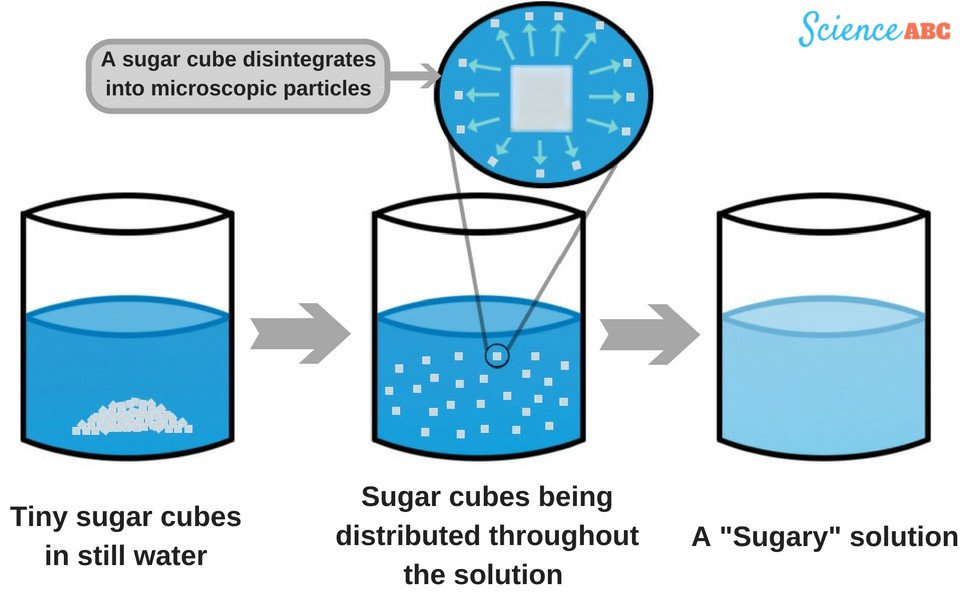 Another question that befuddles many is whether the dissolution of sugar is a physical change or a chemical one. Note that it’s a physical change, because for it to be a chemical change, something new would need to be produced as a result of the dissolution. By the way, this doesn’t happen. All you get after dissolving sugar in water is a ‘sugary’ solution, no more and no less. The identity of the constituents remains unchanged.

Next time you come across a curious kid asking about the sugar cubes that vanish when stirred, this information could come in pretty handy. Most of all, just remember not to wrap up the discussion by simply saying ‘sugar dissolves in water’.