Coughing is quite a nuisance, if you think about it. Not only is it quite uncomfortable (and even painful when you’re sick), but also pretty embarrassing, especially you’re experiencing one of those ‘coughing fits’. 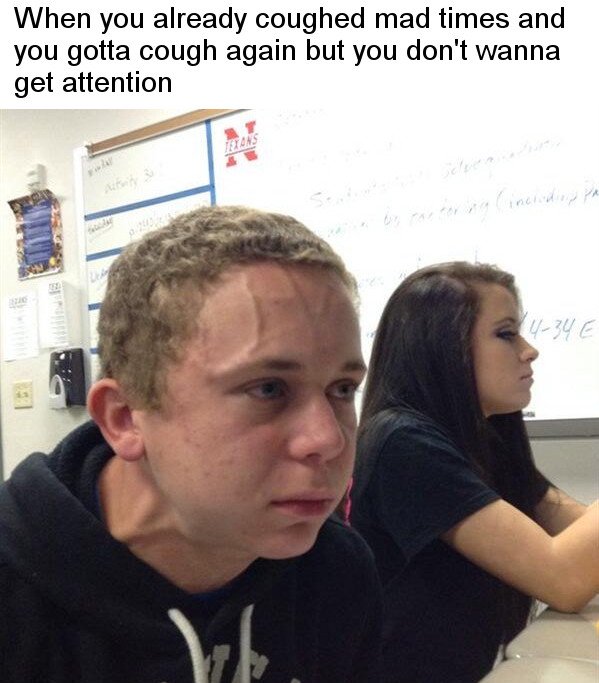 If you’re coughing a lot, then people around you, if they care enough, will inevitably recommend drinking water to help ease the coughing fit. Do you know why water works wonders to (temporarily) cure fits of coughing?

In order to answer that, we must first understand a thing or two about the throat and how coughing works.

Anatomy Of The Throat

The word ‘throat’ refers to a ring-like muscular tube that acts as a passageway for liquids, food and air. It’s located behind the nose and mouth.

Note that sometimes the word ‘throat’ is used to refer to the parts of the neck anterior to the vertebral column, especially the pharynx and larynx; at other times, it refers to just the pharynx. 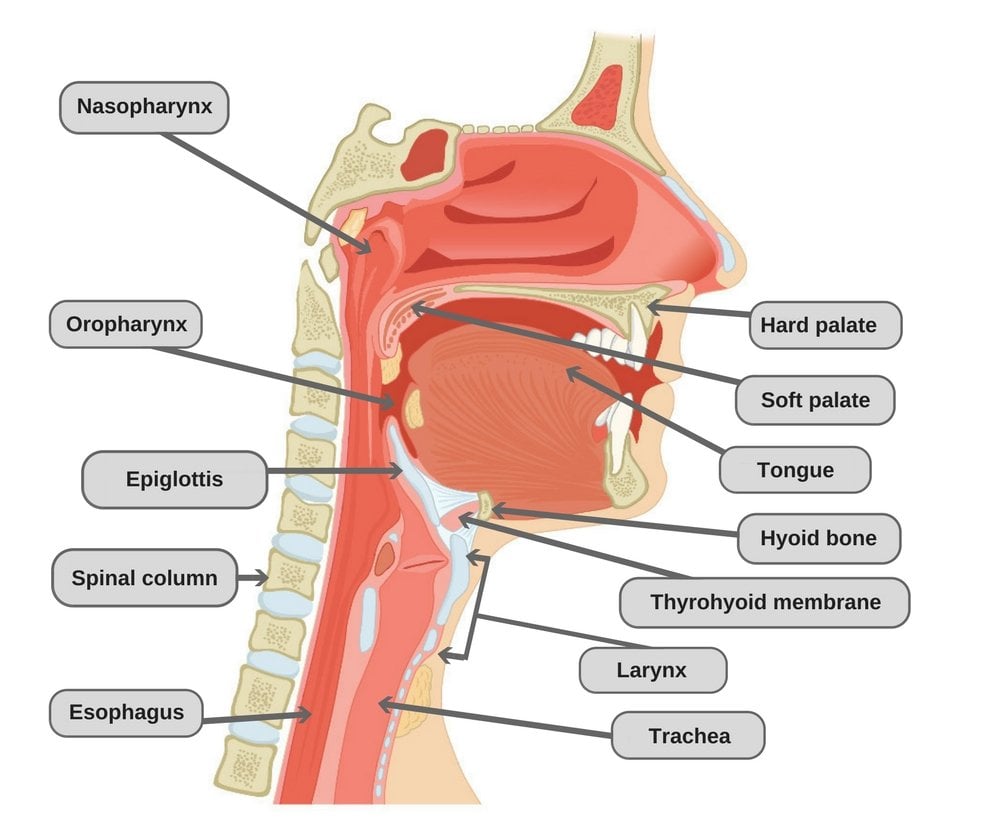 The human throat and the organs it consists of.

The throat contains the pharynx, which extends from the base of the skull to the point where it becomes continuous with the esophagus. The throat also consists of the larynx (i.e., the ‘voice box’), which contains the vocal cords that vibrate to produce sound. And then there is the trachea (or the windpipe), which connects the throat to the lungs.

As you can see in the image, the larynx is located on the top of the trachea. The throat helps in performing a number of functions, like swallowing, forming speech and preventing ingested food items from going into the windpipe (with the help of epiglottis).

Now, let’s take a quick look at the mechanism of the coughing process.

How Do We Cough? 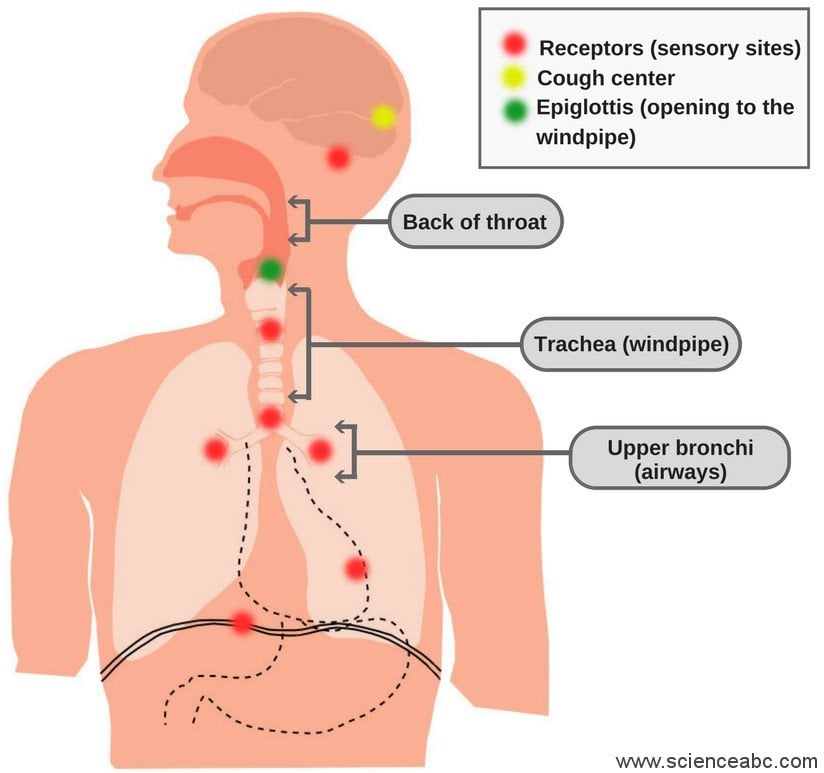 The ‘cough center’ in the brain that oversees the entire coughing process.

Consider an event that triggers the coughing reflex, such as water entering the windpipe. In response, the vocal cords open widely, allowing additional air to pass through to the lungs. Then, the epiglottis shuts off the windpipe and the abdominal muscles contract, thereby increasing the pressure behind the epiglottis. Consequently, air is forcefully released, creating a rushing sound while passing over the vocal cords.

It’s interesting to note that, when you cough, air can be expelled as fast as 100 mph, thereby getting rid of irritants present in the upper respiratory tract.

So, why does water help to ease coughing?

How Water Helps Against Coughing

The windpipe and food pipe are located practically next to each other. This arrangement, if you think about it, is a little precarious, to say the least. 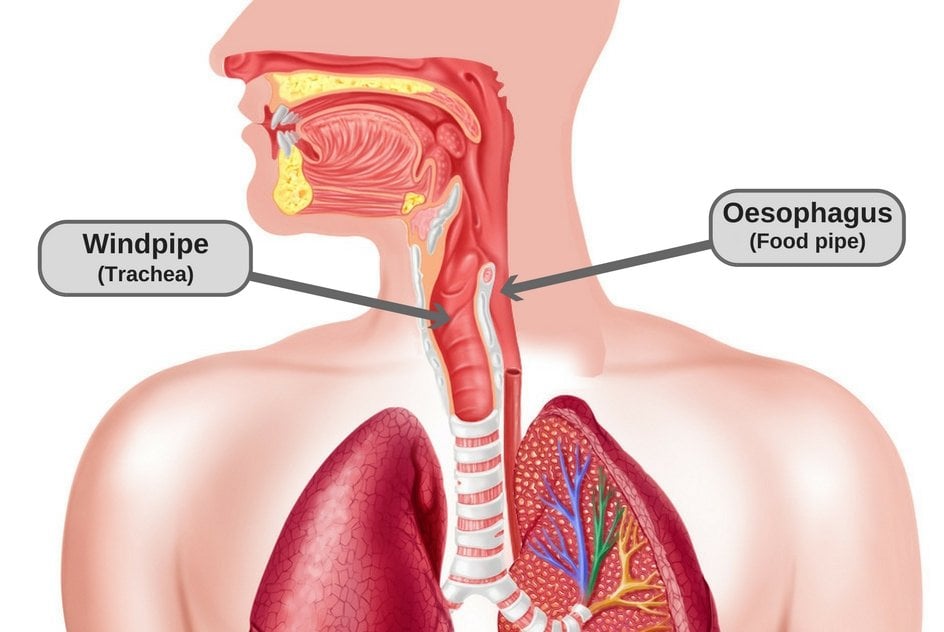 Notice how close the windpipe and food pipe are.

The upper airway (i.e., the voice box and above) is very sensitive. In most cases, when you feel that something is stuck in your throat, it’s generally in this region. When you drink water, the ‘thing’ that feels stuck is flushed down by water and deposited into the stomach via the food pipe.

In contrast, the lower airway (the area below the voice box, including the trachea and tubes that go down into the lungs) is not that sensitive. It’s made of cartilage and doesn’t have nearly as many nerves.

A ‘dry throat’ in healthy individuals is typically a result of mucous membranes drying out (note that being sick can also make your throat/mouth feel dry). That’s why drinking water helps alleviate a dry throat. 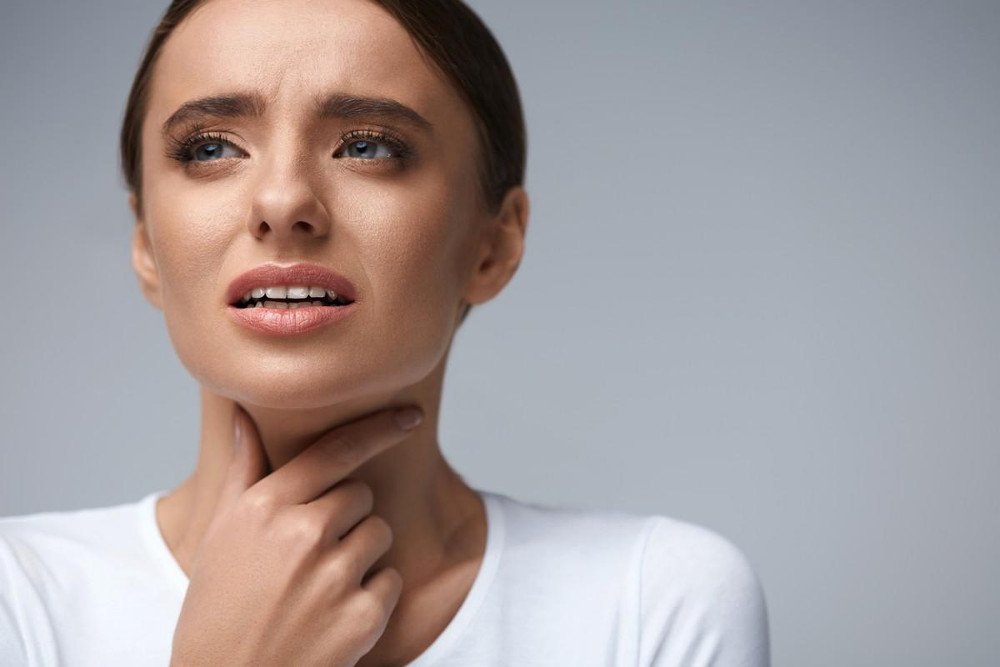 Basically, when you cough as a result of feeling that something is stuck in your windpipe, that ‘something’ is actually an irritant present somewhere in the pharynx, far above the windpipe. As water passes over the pharynx on its way to the food pipe, it will usually dislodge the irritant and relieve the irritation and coughing.

If, however, an ingested item goes down the wrong pipe and ends up somewhere in the trachea, then drinking water won’t help… at all.