While there can be many underlying medical conditions or factors that can lead to hiccups, they are commonly caused by eating or drinking too quickly, as this can cause the stomach to become distended and irritated. This can cause the diaphragm to contract, which leads to hiccups.

Imagine you’re standing in front of your class, about to launch into a presentation, when a strange sound emerges from your throat, accompanied by a slight jerk of your shoulders and head. You hope desperately that it won’t happen again, but that isn’t likely. There’s a good chance you have the hiccups, and it could be a while before you’re ready to speak without interrupting yourself every 15 seconds.

There is no doubt that many of you have experience a poorly timed hiccup attack at some point in your life, but the real question is – why do we get the hiccups in the first place?

By definition, hiccups are rapid bursts of inhalation, which occur as a result of activity of the intercostal muscles, which lie between the diaphragm and the ribs. This is similar to the normal act of breathing: the diaphragm contracts and those muscles help the body draw air into the lungs. However, in the case of hiccups, these contractions can be rapid and involuntary, resulting in an attack of “the hiccups”.

At the same time, the larynx also contracts, and there is a complete closure of the glottis, which effectively blocks any intake of air. As result, there is often a small sound produced, while the rapid contractions of these muscles can cause slight shudders or jerks of the shoulders, neck and head.

In most cases, hiccups are caused by the stomach becoming distended, which is common if you eat or drink something too quickly. When the stomach becomes distended, it can push stomach acid back into the esophagus, which irritates that part of the body. That irritation leads to the contraction of the diaphragm and the hiccups. By decreasing the level of oxygen, or increasing the level of carbon dioxide, you can soothe that irritation and stop the hiccups from occurring. Most cases of the hiccups are little more than annoyances, and rarely last more than a few minutes. 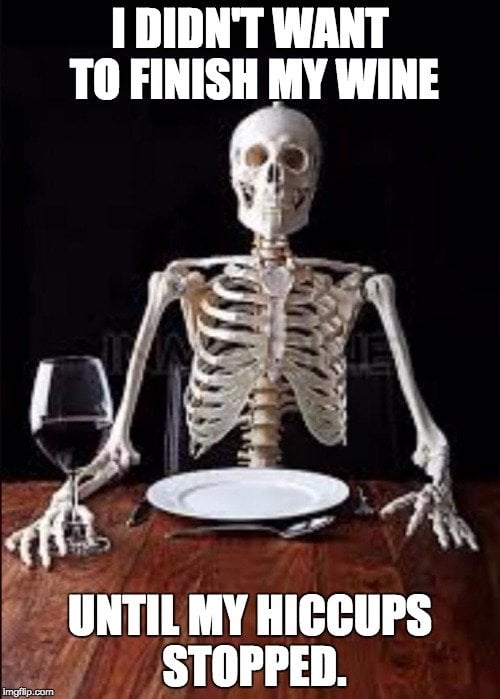 However, hiccups can be caused by other things as well, particularly if the hiccups last for long periods of time, sometimes even days or weeks of chronic hiccuping. If your hiccups last for more than 2 days, it may be time to go and see a doctor.  These extended bouts of hiccups are likely due to an underlying disease or health condition that should be addressed. Damage to the phrenic nerve, which affects the activity of the diaphragm, may often be to blame, but certain metabolic disorders can also cause this involuntary activity to stretch on for days. People who have had a stroke or have asthma may also be at increased risk of long periods of hiccuping.

For most people, hiccups are occasional annoyances, and can even be amusing, but for chronic sufferers of hiccups, it can cause anxiety, depression and insomnia… have you ever tried falling asleep with hiccups? It’s not easy!

The list and details of other neurological, metabolic and physiological causes of hiccups is outside the scope of this article, but if you regularly suffer from short bursts of hiccups and want to prevent these temporary occurrences, there are some things you can avoid.

How to get rid of hiccups

If you have an excess of gas in the stomach, there is a good chance you will experience hiccups, so try to eat slower, or eat less food. When you swallow, you are also adding air to your stomach, which can fill up your gut. When you drink soda or beer, it will speed up the rate at which you get hiccups, so drink slowly, allowing your stomach to process the food at a reasonable pace.

Eating hot or spicy foods can often irritate the phrenic nerve and cause hiccups, so be sure your food is at a normal temperature before taking a bite. Sudden changes in temperature can also cause hiccups, but there isn’t much you can do about the weather!

Finally, some medications may increase your risk of hiccups, including corticosteroids, painkillers, barbiturates and benzodiazepines, but be sure to speak with your doctor before making any changes to your medication. If one of your medications is causing chronic hiccups that last for hours or days at a time, there might be alternative options.

How to treat hiccups

There are dozens of old wives’ tales about ways to eliminate hiccups naturally, including staring at a light, holding your breath, breathing into a paper bag, sipping ice water, biting on a lemon and gargling with cold water.

As it turns out, many of these traditional remedies do work, because they can affect the level of carbon dioxide in the body, or reduce irritation on nerves and tissues. Breathing into a paper bag, if you have one lying around, is one of the most effective solutions, as this can quickly increase the amount of carbon dioxide in the lungs, allowing the diaphragm to relax. In this way, the rapid muscle contractions will stop. Holding your breath basically accomplishes the same thing, but hiccups can often interrupt this process, re-flooding your lungs with oxygen. No matter what you do, hiccups are something that will strike at some time when you least expect it, just like a sneezing fit, and many times, you simply have to ride it out and wait for the irritation to pass!