Water and other fluids follow the same journey as other types of food, but in their case, the process involves absorption, rather than digestion.

We know that the food we eat goes straight down our esophagus (a.k.a., the food pipe) and into our stomach. We have already covered the entire journey of food through the long digestive system in this article.

Several readers have recently asked us what happens to water and other liquids such as tea, coffee, and alcohol in the gut. Do they follow the same route as “solid” foods, or do they have another, quicker route for digestion, especially because they are liquids?

Why Does Diarrhea Travel Quickly Through The Body When Digestion Takes So Long?
If you wish to buy/license this video, please write to us at admin@scienceabc.com.

The Basics Of Digestion

Usually, people consume about 2 liters of dietary water daily through various means, including drinking water directly or via food and other beverages. Additionally, the volume of gastrointestinal secretions, including gastric, saliva, pancreatic, intestinal, and bile fluids, is about 8 liters, which means that 10 liters of fluid enter the intestines every day (Source). This is a considerable amount of fluid that must be processed – or more precisely absorbed – within the body.

When we talk about the digestion/absorption of the things we consume, the first thing we should always remember is that everything we eat enters the stomach via the same route – the esophagus. Liquids such as water, tea, and alcohol do not go any other way. 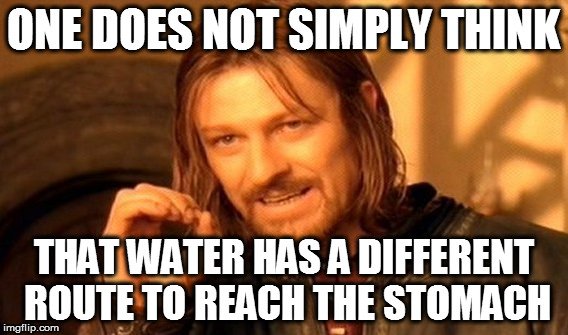 The initial digestive phase is similar to pouring the meal (liquids included) into a blender. Just like in a blender, everything we consume is mixed together and forms a fine mess in the stomach. However, so that you know, the breakdown of food begins before it is in the mouth itself. Our teeth mechanically pulverize the food, while the saliva in the mouth chemically breaks down fat and starch. This happens with solid foods that contain large complex molecules such as proteins and carbohydrates.

On the other hand, water is a very simple molecule, so our body does not have to break it into smaller, simpler molecules. In fact, water molecules are so small that they have no problem diffusing through the cell membrane. This cell membrane consists of small channels or pores through which water and ions, such as sodium, enter the cell, meaning that water is absorbed directly through the epithelial cells that cover the human intestinal tract. In short, it means that the intestines are responsible for absorbing most of the water we consume.

Also Read: Ingestion To Excretion: Journey Of Food From The Time It Enters Our Body To The Time It Leaves

The Role Of The Small Intestine In The Absorption Of Liquids

Fortunately for us, the small intestine is more than up to the task. It’s quite an extensive organ, boasting a length of around 20 feet (6 meters). It also has a huge inner surface area of roughly 250 square meters – the size of a tennis court! (Source) This large surface area helps to absorb water and other liquids quickly and efficiently.

Of the almost 10 liters of water that enters our stomach every day, 80-90% is absorbed by the small intestine. The remaining 10% (amounting to 1 liter of water) is passed on to the large intestine, which absorbs as much water as possible from the waste substances ready to be excreted from the body as feces.

Absorption Of Other Liquids

The non-water fluids that we normally consume daily are nothing more than chemicals suspended in water. Fruit juice, for example, consists largely of water and sugar, along with several other ingredients such as preservatives, vitamins, and minerals in small quantities. Sugar is broken down by enzymes in the mouth and small intestine, where it is also absorbed into the body. Vitamins may or may not be broken down but are eventually absorbed in the small intestine; the same applies to minerals.

The same is true of beverages such as tea and coffee. Sugar and fat, when milk is used, begin to break down in the mouth. The stomach will churn everything and begins to break down proteins, again from milk that might be present. As soon as the food reaches the small intestine, the vitamins and minerals are absorbed. Tea and coffee also contain chemicals classified as antioxidants, some of which can be absorbed into the body. Amino acids are also a part of tea and coffee, and they fulfill their absorbed fate in the small intestine.

However, alcohol absorption is also linked to other foods: Eating a meal high in fat or protein before drinking decreases alcohol absorption. One reason for this is that eating such foods quickens the transition of food from the stomach to the small intestine, which is known as gastric emptying. When fats reach the small intestine, it initiates gastric emptying. Since the stomach absorbs most of the alcohol, the faster the alcohol gets out of the stomach, the less drunk you will be.

Also Read: Why Shouldn’t You Consume Alcohol On An Empty Stomach?

All in all, everything we consume in our diet is broken down into its components by digestion, so whether you eat a sumptuous meal or a simple glass of juice, everything is treated more or less the same after ingestion.

Test your knowledge on digestion!