The Compton Effect is a quantum phenomenon that affirms the particle nature of radiation. This phenomenon is named after the physicist who discovered it.

The Compton Effect is a quantum phenomenon of scattering. American Physicist, Arthur Holly Compton, developed the theory. He studied the scattering effect of the X-rays that scattered off an electron. This backed the theory supporting the particle nature of radiation. He published this work in 1923, in The Physical Review. The article was titled “A Quantum Theory of the scattering X – rays by Light Elements”.

Elastic Collision And The Compton Effect

When you are playing carom board or shuffleboard, you know exactly where to keep the striker to win a pawn… and then you shoot.

Of course, one must also aim!

This, in turn, changes the direction of the pawn. Observe that the striker transfers its kinetic energy to the pawn it hits (Photo Credit: Mr Sagar/Shutterstock)

Quantum Mechanics has been an answer to observations that classical physics couldn’t explain. The Compton Effect is one such phenomenon.

The Compton Effect And Particle Nature Of Radiation

Now, let’s take a closer look at the experiment conducted by Mr. Compton!

When an X-ray of wavelength

is incident on an electron, the scattered X-ray from the electron has a wavelength of

. The Compton Effect demonstrates an increase in the wavelength of the incident X-Rays.

The Compton Effect scattered the X-rays off an electron, and this scattering complied with what we know of an elastic collision. Thus, it confirms the particle nature of radiation.

It concluded that the X-rays are made up of photons, and photons are discrete packets.

The wavelength of the scattered radiation is obtained through the Laws of Conservation of energy and momentum. The radiation after collision with the electron changed its direction of propagation. The electron loses some of its energy and experiences a recoil. The recoil provides velocity to the electron. This velocity is reflected as an increase in momentum.

Also Read: What Is The Observer Effect In Quantum Mechanics?

The Compton Effect explains the relationship between the incident and the scattered wavelength. 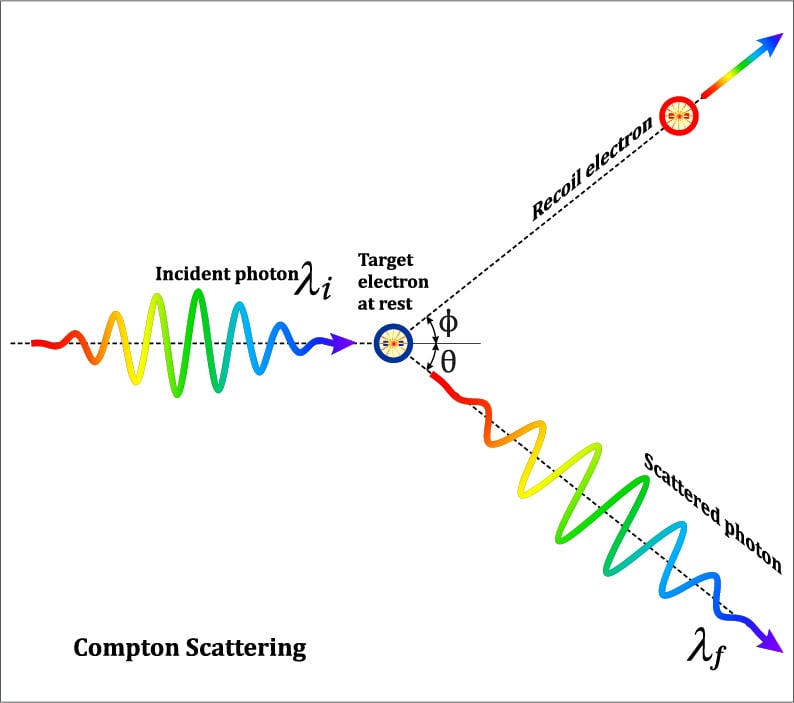 The Mathematical Equation Of The Compton Effect

–  the scattering angle, i.e., the angle between the incident ray and the scattered ray.

– Compton wavelength and is equal to

where h is called Planck’s constant,

is mass of the electron and c is the speed of light in vacuum.

The above equation affirms that the scattering angle is independent of wavelengths of radiation, but is dependent on the increase in the wavelength.

Comparing The Experimental Data With The Theoretical Values

Mr. Compton obtained experimental data by scattering electromagnetic rays on an electron. He allowed the X-ray radiation from a molybdenum target to scatter off graphite. The scattered radiation was measured at different angles, and these readings were plotted. The graph that was subsequently plotted was between the wavelength and the scattering angle.

The experimental and theoretical data matched! The graph plotted by Mr. Compton from his experimental observations. Credit: The Physical Review “A Quantum Theory of the Scattering of X-rays by Light Elements” by Arthur H. Compton At a scattering angle of

, he observed the increase in wavelength to be

m. The result from the theory was

m. He concluded that the observation was quite a satisfactory agreement. It emphasizes that the increase in wavelength is dependent on the scattering angle.

The Compton Effect is one of the profound and most impactful theories that prove the particle nature of radiation.

The Compton Effect finds its application in radio-biology to treat cancer patients through radiation therapy.

Also Read: Wave-Particle Duality: Is An Electron A Particle Or A Wave?

Today, numerous fields have emerged as applications of the Compton Effect. The 20th century, after Compton’s discovery, has been historical in the study and development of Quantum Mechanics. The Compton effect has been revolutionary in this area as well. It reiterates the idea of Particle-Wave Duality and opened new dimensions of human thinking in the early 1900s.