The double-slit experiment shows the duality of the quantum world. A photon’s wave/particle duality is affected when it is observed.

Light has been one of the major areas of inquiry for physicists since we first began questioning the world around us. Understandably so, as it is the medium by which we see, measure and understand the world. It holds a powerful symbolism in our imaginations, is reflected in our religions and is famously quoted in our scriptures. 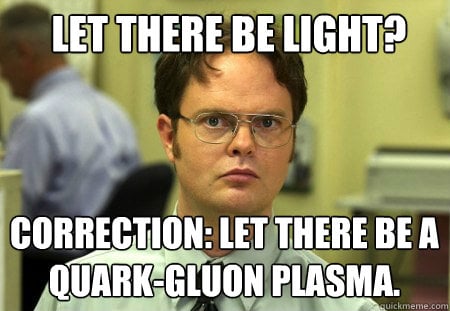 Rigorous science has enlightened our ignorance about Light. Until the 1800s, light was thought to be made up of particles, attested by Newtonian physics.

This came rather intuitively, as we see light traveling in a straight line, like bullets coming out of a gun. 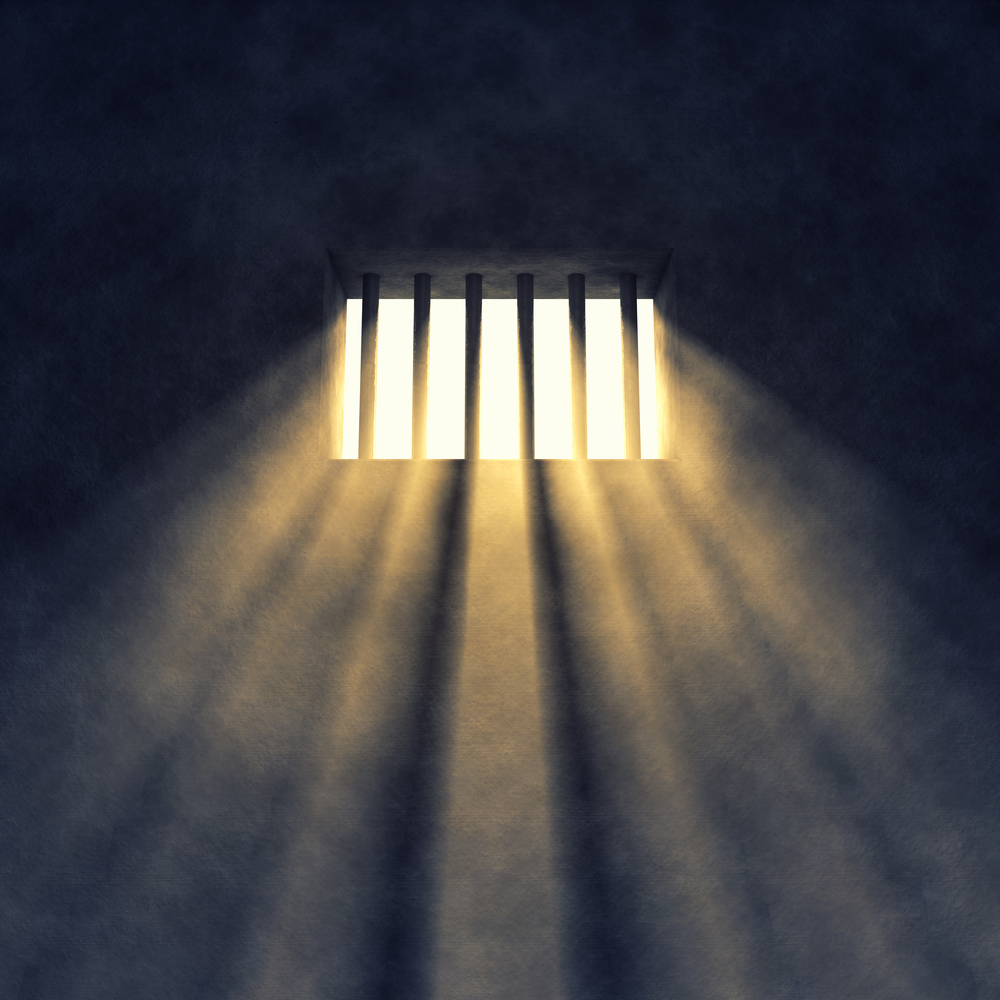 However, nature is often weirder than our expectations and light’s weird behavior was first shown by Thomas Young in his now heavily worked upon and immortalized double-slit experiment. This experiment provides some fascinating insights into the minute workings of nature and has challenged everything we know about light, matter, and reality itself. Let’s revisit the experiment that has baffled legendary scientists – including Einstein!

The experiment is pretty straightforward, with very few parts. There are three main components:

• Two narrow slits for the source to pass-through. 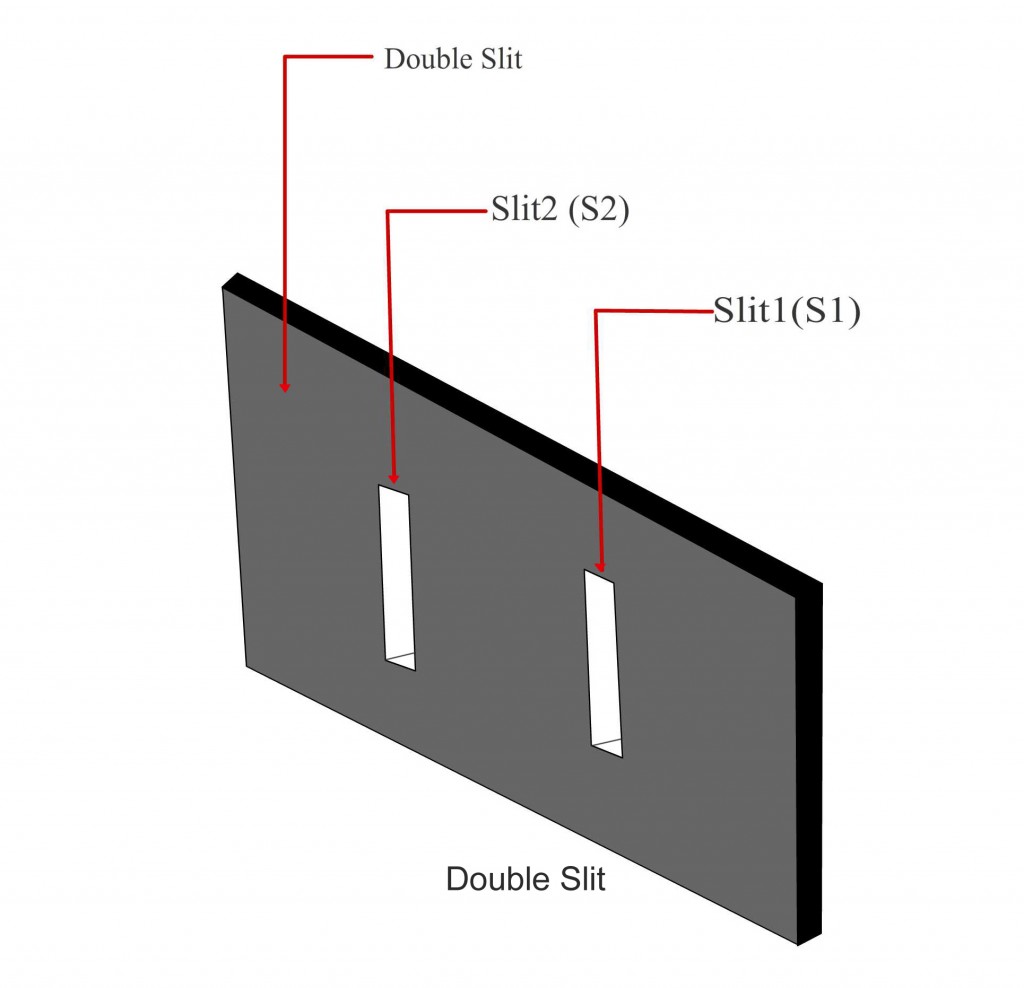 • A projection screen, where the source makes its impression. The pattern of the impression tells us if it is a wave or a particle. 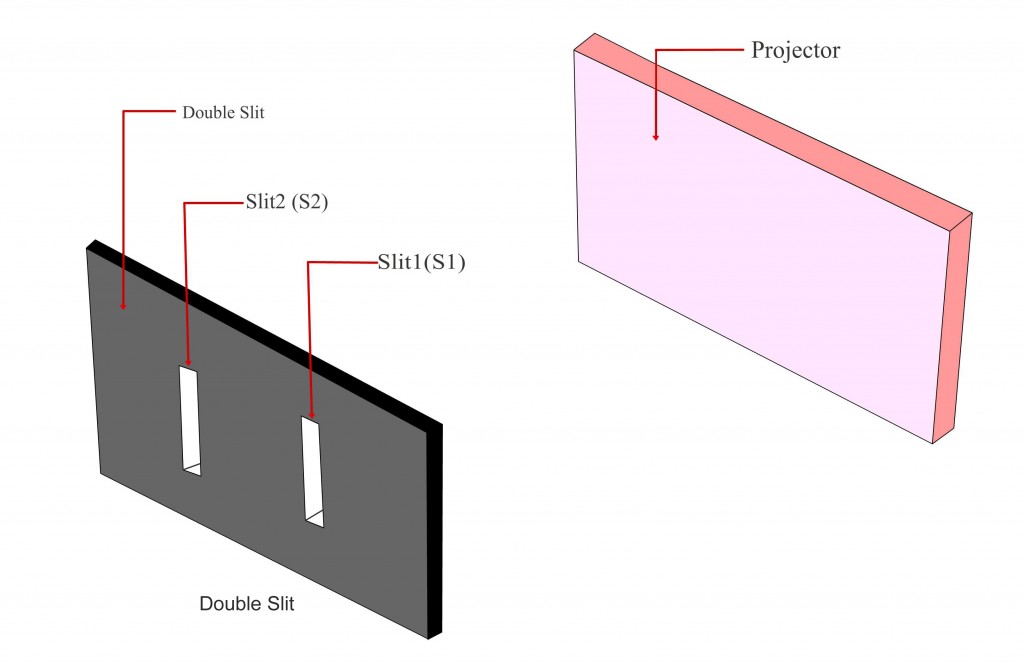 The objective of the experiment is to see the underlying make-up of light and matter.

Let’s start with something familiar, bullets from a machine gun. Our gun fires bullets at regular intervals towards the range of the two slits. 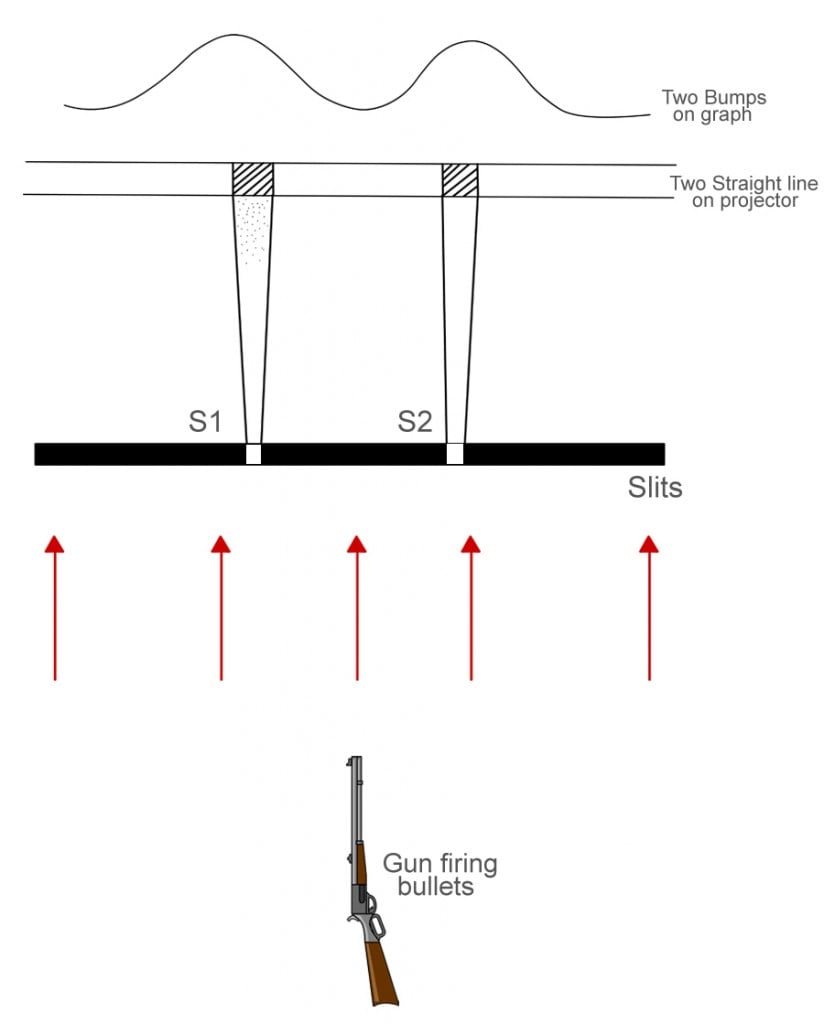 The experiment done with bullets

Two straight lines appear on the projector. The graph pattern is that of two mountains; where the crests imply the impression points, and the troughs imply empty places.

Light is the next source for the experiment. The impression appears as bundles of photons fire through the two slits. What is the pattern you think will emerge? Is it similar to that of bullets? Well, light consists of bullet-like particles, so it isn’t farfetched to say the pattern will be the same. 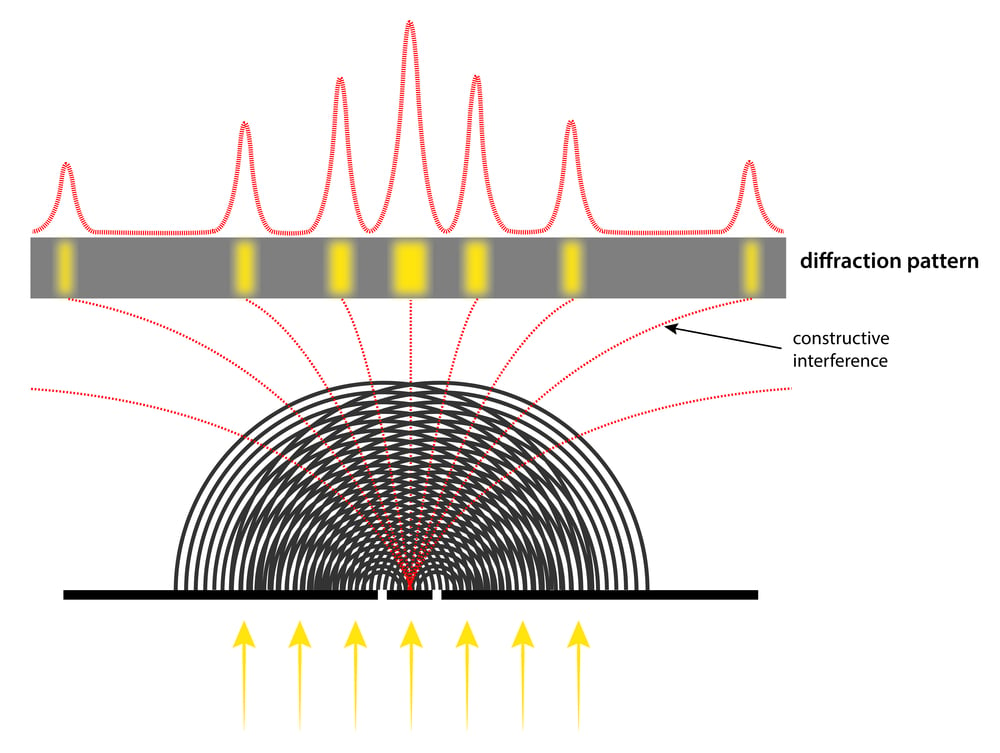 Photons traveling as waves and colliding with each other (Photo Credit : magnetix/Shutterstock)

To everyone’s surprise, however, the impression isn’t of two straight lines. The graph pattern that emerges is an interference pattern; there is the brightest impression in the center, and recedes on both sides. An interference pattern is only made when two waves interfere with each other; there is no other possible explanation to it. The pattern shows that the light is moving in waves.

The waves from the two slits are colliding with each other. There is a peculiar formation that develops when two waves collide. A wave has a crest (the part above) and a trough (the part below).

Crest and Trough in a wave (Photo Credit : Kicky_princess/Shutterstock) 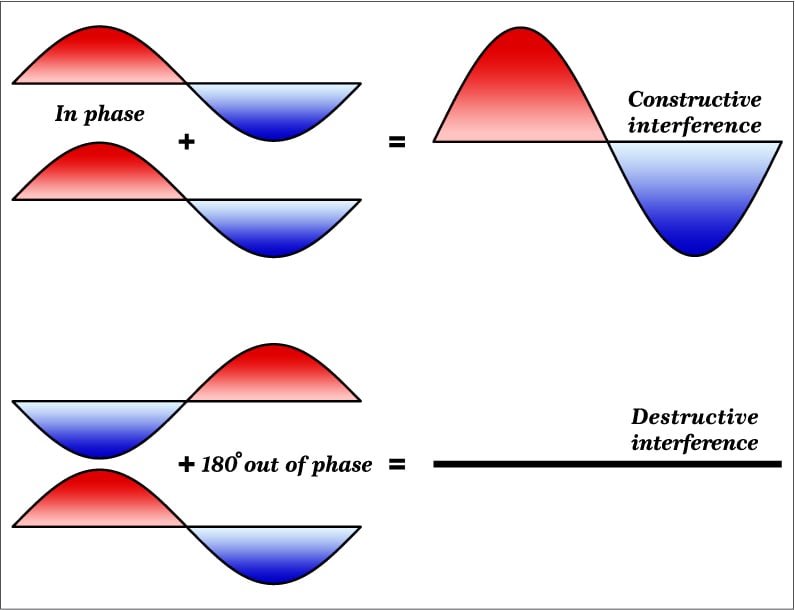 The second slit is closed and the experiment is done again. Now with one slit to move through, the photons form a straight line. Note, here S is not equal to the sum of S1 and S2, and this is also where light’s wave-particle duality comes into focus.

This revelation changed our thinking about light, but the rabbit hole doesn’t end there; things just get weirder when we further iterate the experiment. Now, instead of flashing a bunch of photons together, only single photons are fired through the slits at regular intervals. Given that it is a single photon, and has no other wave to interact with, we can say that the photon will make a single line on the projector, yet the result is counter-intuitive; the formation on the projector is still an interference pattern!

How can this be? How can a single photon know about the photons coming after it and form a pattern resembling that of the group being shot together?

This is where quantum spookiness begins and things get pretty far out. It appears that a single photon is traveling through both the slits and colliding with itself to form the interference pattern. This has bothered physicists a lot, as it does not obey the laws that we see in our Newtonian scale. It turns out that a large assemblage appears to behave in a way that is different from the behavior of its minuscule components.

Now, let’s hit a home run and take this weirdness to another level. This last iteration of the experiment will make you appreciate nature’s absurdness and how totally wacky our world truly is.

At this point, we have established that a single photon travels from both the slit at the same time and collides with itself to form the interference pattern. As classical physics dictates, it is impossible for the same photon to move through the two slits at the same time. Perhaps it is splitting itself into two parts and interacting with itself. The only way to know is to watch. A detector is placed in one of the slits so when the photon passes through the slit, the detector identifies it. 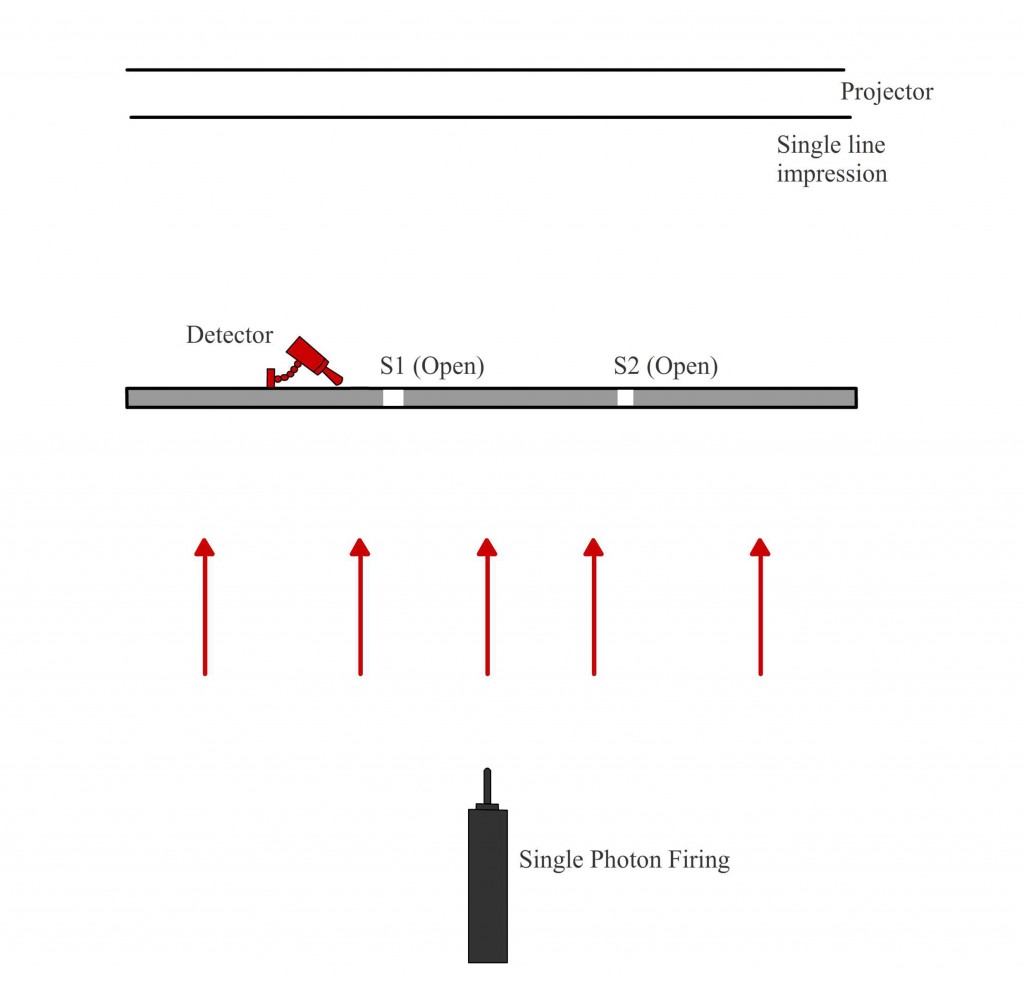 As the photon passes through the slit, the detector identifies it. The pattern that emerges on the projector is a single line. 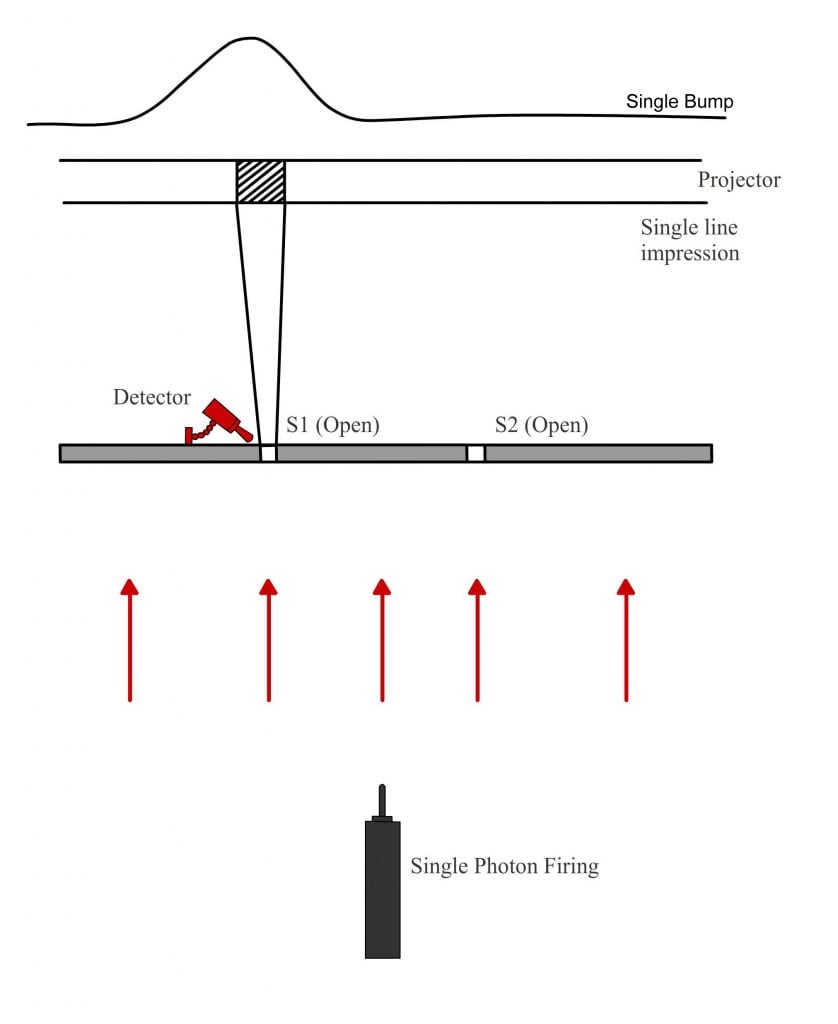 The photon acts as a particle when being observed.

Just when you think you’re coming to terms with the quantum scale, things slip over your head. The act of measuring or observing the photon makes it go through only one path, making the impression on the projector of a particle. It doesn’t interact with itself anymore and no interference pattern emerges. When the experiment is carried out with varying degrees of detection, so that the detection is dimmer on every passing photon (say 7-10 photons are being detected and that number keeps decreasing), then the interference pattern starts to slowly emerge again. The photons act as a wave when not being observed and act as particles when they are being observed. 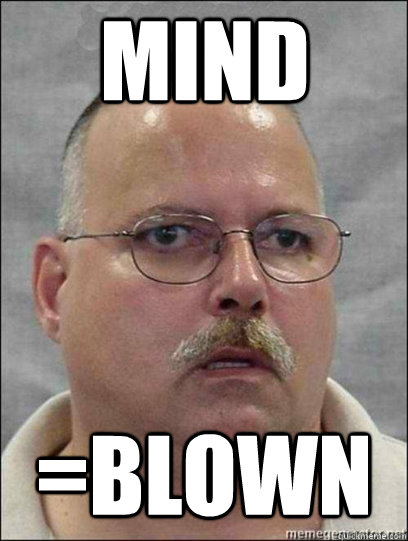 The double-slit experiments is one of the most iterated experiments in scientific history. Electrons, atoms, molecules and even complex fullerenes like Buckyballs have been used as sources for the experiment. The same results are obtained using every source; the pattern is consistent in both light and matter.

Things on the quantum scale don’t follow the deterministic laws of the macro scale. There are many interpretations of this quantum phenomenon. The Copenhagen Interpretation states that the interference pattern is all the probable functions of the photon (a wave function) and the act of observing or measuring it makes the wave select one of the many alternatives (collapsing of the wave function).

Another interpretation is the many-worlds theory, which states that all the possible states of the photon’s wave function exist simultaneously and our detection is just this particular instance of the wave function.

The theories tend to run wild and it’s safe to say that the quantum realm is a little slippery to wrap your head around. However, there’s no need to feel bad, as you’re in good company. As Richard Feynman said: 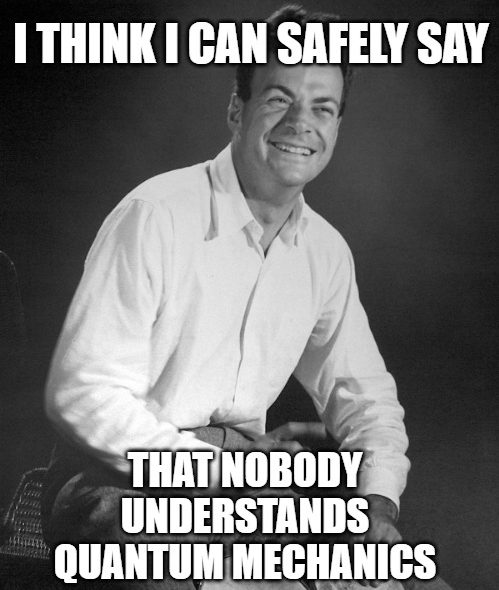