Radioactive decay is a nucleus’ journey to attaining stability via emission of highly energetic radiation and subatomic particles. This phenomenon is called radioactivity.

Our brain’s response to the word “radioactivity” often veers into the world of superheroes—swinging across the city, turning into a human fireball, or hulk-smashing bad guys. Or perhaps your mind is summoned to a very dark post-apocalyptic world after a nuclear fallout. There is no middle ground.

However, 120 years ago, the world had a completely different perception of radioactivity. In fact, it was considered to be a miraculous reservoir of health and vitality. Radioactive elements like radium started appearing as ingredients in everything, from toothpaste and watch dials to water and butter! 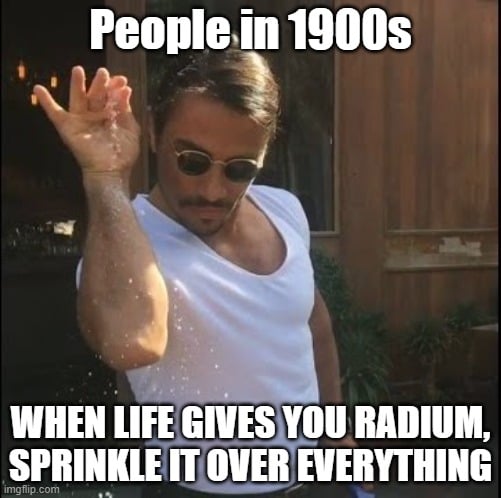 So, what happened? How did such a seemingly marvelous discovery turn into the monster under our bed that scares people across the world?

Why Are Certain Elements Radioactive?

Imagine that you just accidentally inhaled pollen and are awaiting a sneeze. Now, hold onto that feeling. That is what certain atoms experience all the time—the urge to expel out the excess and regain stability.

Everything we see around us is mostly made up of elements with stable atoms (meaning that your carbon-rich wooden table isn’t going to disintegrate into something else on its own). The subatomic component responsible for maintaining the stability of an atom is its nucleus.

However, we see that the balance between the forces starts to topple when the number of neutrons exceeds that of protons. Example: Carbon 12 with 6 n and 6 p is a stable isotope, but C 14 has 8 n and 6 p, making it an unstable isotope. Or, perhaps a nucleus exceeds the threshold number of neutrons and protons that the strong nuclear force can hold together comfortably, such as any nucleus heavier than Bismuth-209. These scenarios give rise to unstable isotopes of elements.

Just as your body, through a series of expansions and contractions, expels out the irritating substance during a sneeze, the unstable isotopes of elements fling out different particles or forms of energy to restore the balance between the forces in their nucleus. During this process of attaining stability, they change into a new nucleus.

This property of turning into something new to attain stability is what we call radioactivity, and the process by which it transforms is called radioactive decay.

How Does A Nucleus Undergo Radioactive Decay?

A nucleus can undergo nuclear or radioactive decay through the emission of alpha, beta, or gamma radiation (and sometimes a combination of all three).

An alpha particle is basically a helium nucleus, and is made up of 2 protons and 2 neutrons.

The alpha particles are relatively heavy. They can travel only a few centimeters through the air and can be easily stopped by a sheet of paper or plastic.

A beta particle is an electron or a positron released by the nucleus of a very heavy element as a result of the conversion of neutrons to protons, and vice versa. Beta particles have higher energy and penetrating power than alpha particles, but are less ionizing in nature. They can travel through the air, but can be stopped by a thin sheet of metal or even protective clothing.

Finally, the most energetic and fatal form of radioactive decay:  Gamma rays.

This is a form of high-energy light emitted by a nucleus that is left at a higher energy state after an alpha and beta decay process has occurred, but must still return to a more stable lower energy state.

A nucleus can undergo all of these decays spontaneously and transform into a stable form within seconds, or it might take days, years, or even centuries. This rate is decided by the half-life of the radioactive substance, i.e., the amount of time taken by a radioactive substance to decay into half of its initial value.

The Rise Of Radioactivity And Nuclear Energy

One can’t talk about radioactivity without mentioning Marie Curie. Her lead-sealed and highly radioactive  laboratory, notebooks, cookbooks, and furniture were all contaminated by radium, and will be for the next 12,000 years or so. However, they are a testimony to her contribution to the field, and the reason behind her two Nobel prizes.

The discovery of radioactivity and radioactive elements by Marie and Pierre Curie, along with Henri Becquerel in the early 1900s, opened the door to a completely new field of atomic physics. That step forward eventually led to the discovery of different components of atoms and nuclear energy. Radioactive elements like Uranium-235 and Plutonium-239 are bombarded with neutrons that release an enormous amount of energy. When manipulated correctly inside a nuclear reactor, these fuels can act as prolonged sources of energy. A kilogram of uranium-235 can produce almost 24,000,000 kWh of power by nuclear fission, whereas 1 kg of Coal can only produce 8kWh of energy. Utilizing this power source appropriately could solve the global problem of increasing carbon dioxide emissions.

However, the Achilles’ heel here is the safe disposal of used radioactive fuels and the widespread fear of nuclear mishaps.

What happened at the Chernobyl reactor decades ago has left mankind shaken to this day. One incident of a reactor meltdown and entire acres of land were rendered uninhabitable for generations, not to mention the thousands of lives exposed to the indelible effects of radiation poisoning.

The authorities have built a sarcophagus of concrete around the plant to prevent the leaking of radiation into the atmosphere. Furthermore, the remains of the reactor are inside a containment structure with thick steel walls. The clean-up protocols will be continued until 2065.

The Fukushima Daiichi reactor, which was hit by a Tsunami in 2011, forced the evacuation of thousands in a 20km radius of the incident. Authorities are still cleaning up the surroundings, as well as removing and disposing of the topsoil in the affected region.

The Effects Of Radioactivity

The harmful effects of radioactive substances can impact our body indirectly via radiation exposure or directly via contact or ingestion.

As a whole, radiation isn’t dangerous. Light bouncing off a reflective surface, the microwaves heating our food, or the signals received by our phones are all different forms of radiation, but there is one kind of radiation that is particularly harmful to all biological forms—ionizing or nuclear radiations.

A radioactive material, during its decay process, emits ionizing radiation that can easily turn neutral atoms into positively charged ions by knocking off their electrons. When a living being is exposed to such high-energy radiation, it doesn’t make someone radioactive or super-powered, but it does make them prone to radiation poisoning.

Radiation poisoning from nuclear radiation can easily damage the molecular structure of DNA and harm living cells. A heavy or prolonged dose can prove lethal, as these rays are carcinogenic.

Since the radioactive substance is in direct contact with the inside or outside of the body, this form of infiltration increases the danger by two-fold. Not only does it expose the body to the effects of radiation poisoning, but also causes internal damage by affecting specific body parts.

Our body mistakes radioactive radium for calcium when ingested. It then keeps replacing the calcium in our body with radium, which leads to necrosis of the bones and teeth. Uranium, when ingested, mainly attacks and damages the kidneys.

There is a saying in toxicology that “the dose makes the poison.” While exposure to unregulated amounts radioactive material can cause severe genetic mutations and cancer, when regulated, they can also cure cancer. Radioactive iodine is used in radiation therapy to treat cancer and for imaging in the thyroid gland. Radioactive technetium is used for the detection of heart, bone, and other organ defects.

Radioactive C-14 carbon is used in carbon dating, which helps us determine the age of things that were once alive or composed of biological material. In some countries, fresh produce is even irradiated before packaging to kill off any germs on the surface of fruits and vegetables. A tiny amount of Americium-241 is used in smoke alarms, which help save thousands of lives every year.

Also Read: Why Is The Term “Half-Life” Used To Measure Radioactivity?

Mankind and radioactivity have coexisted peacefully for ages. The air we breathe, the bananas in our smoothies, and the exit signs that lead the way all contain radioactive elements… but in safe amounts! Technically, we too are radioactive, as our bodies have very trace amounts of the radioactive isotopes of potassium and carbon. Radioactivity is everywhere, and life forever remains indebted to it for keeping our Earth’s core broiling and ensuring that we are protected under a cozy magnetic bubble.

However, hypothetically, if you end up backpacking to an unknown land and the Geiger counter in your bag starts making a loud crackling noise, you should probably just start running!