The term half-life is appropriate due to the exponential and quantum nature of radioactive decay, which makes it impossible to predict exactly when a single atom of radioactive material will disintegrate. The half-life measurement instead relates to statistics, representing the time it takes for a given amount of a substance to be reduced by half as a result of decay.

When one hears the phrase “half-life”, many people think of the popular video game of the same name, but anyone who has ever read about nuclear power, weapons, storage or waste will likely realize that it is related to radioactive elements. Scientists measure the half-life of a substance because it tells them about the amount of radiation that a given substance will give off. Half-life is a fixed constant for every different substance, allowing experts to accurately predict the lifespan of a material.

For radioactive materials, this can establish how long it will take before a material no longer poses a threat; for other materials, such as carbon-14, half-life can help in radiometric dating (carbon dating), to determine the approximate age of ancient remains! While this may seem a bit complicated for those not familiar with nuclear chemistry, it’s a useful and versatile concept to fully understand.

What Is Radioactive Decay?

As you may know, atomic elements can have different isotopes, which are different versions of an element that have the same number of protons, but different numbers of neutrons contained within the nucleus. Thus, the atomic mass of these isotopes will be different, as will some of their physical properties, but their chemical properties are generally the same. Every chemical element has one or more isotope, some of which are stable, and others that are unstable. An atomic nucleus is considered stable when the forces holding the protons and neutrons together are stronger than the forces trying to drive them apart (strong atomic force vs. electrostatic repulsion).

The simplest example of this is hydrogen, which has two stable isotopes—protium (1 proton) and deuterium (known as “heavy hydrogen”, with 1 proton and 1 neutron). However, hydrogen also has an unstable naturally occurring isotope known as tritium, which has 1 proton and 2 neutrons. The instability of this radioisotope means that it wants to break down into a different, more stable form. 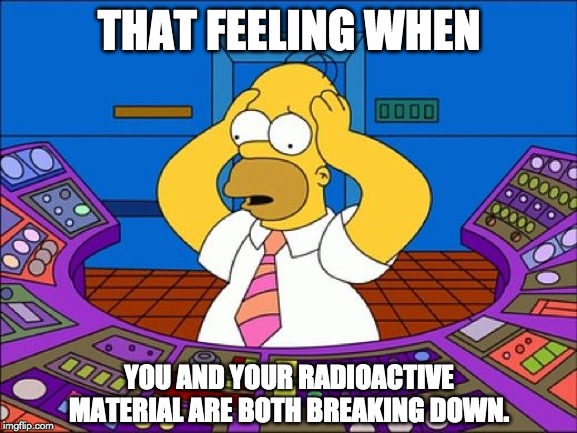 Like human beings struggling with romance, atomic nuclei are constantly seeking stability, and can achieve this through the process of radioactive decay. If there is too much energy within an atomic nucleus to remain together, then the nucleus will break down, losing at least some of the parts (nucleons) that make it unstable. The original unstable nuclei will be called the “parent”, while the more stable nuclei that result are called the “daughters”. The daughters may still be radioactive (unstable)—though more stable than before—and could therefore undergo further decay. Larger elements with more nucleons—namely any element with an atomic number above 83—has an unstable nucleus and is therefore radioactive. However, the intensity of that radioactivity may vary wildly.

Polonium (Po-210), for example, is a rare and highly volatile radioisotope with no stable isotopes. It gives off an incredibly high-energy form of radiation during alpha decay—and actually glows blue!—making it one of the most radioactive elements. It decays relatively quickly though, and has a half-life of only 140 days, breaking down into lead (Pb-206) as the decay product. 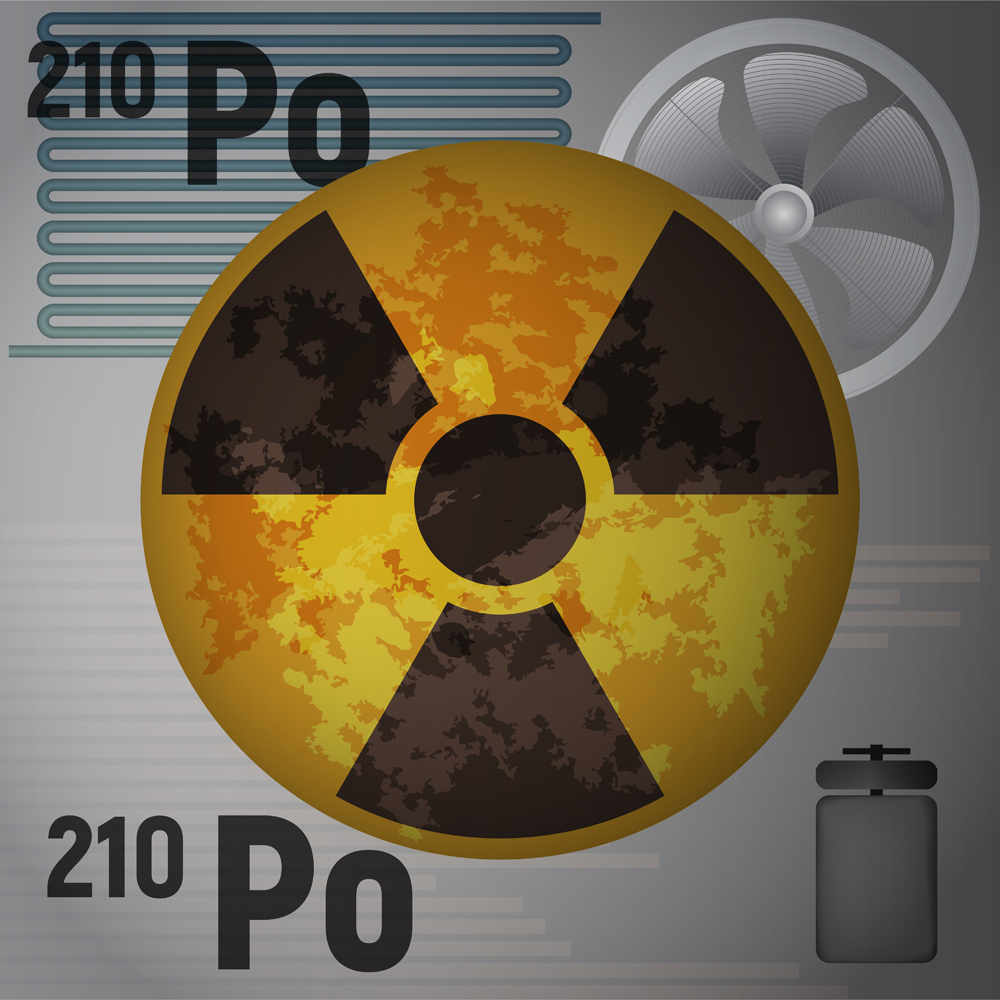 There are three types of radioactive decay that occur based on the type of instability found in the nucleus.

In the case of alpha decay, the nucleus will seek stability by emitting an alpha particle (two protons and two neutrons, essentially a helium atom). The atomic number will decrease by 2 after this type of decay. Uranium-238 is the most common isotope of uranium found in nature, and while it has a half-life of 4.5 billion years, when the atomic nucleus breaks down, it releases an alpha particle to become thorium-234. Alpha particles are unable to penetrate many substances (and can be stopped by a piece of paper!), but they are still released at great speeds and can be dangerous for living cells, as they can knock electrons off nearby atoms. Therefore, alpha particles are dangerous when ingested or introduced to the body, but are generally considered harmless to humans as they can’t even penetrate a person’s clothing! 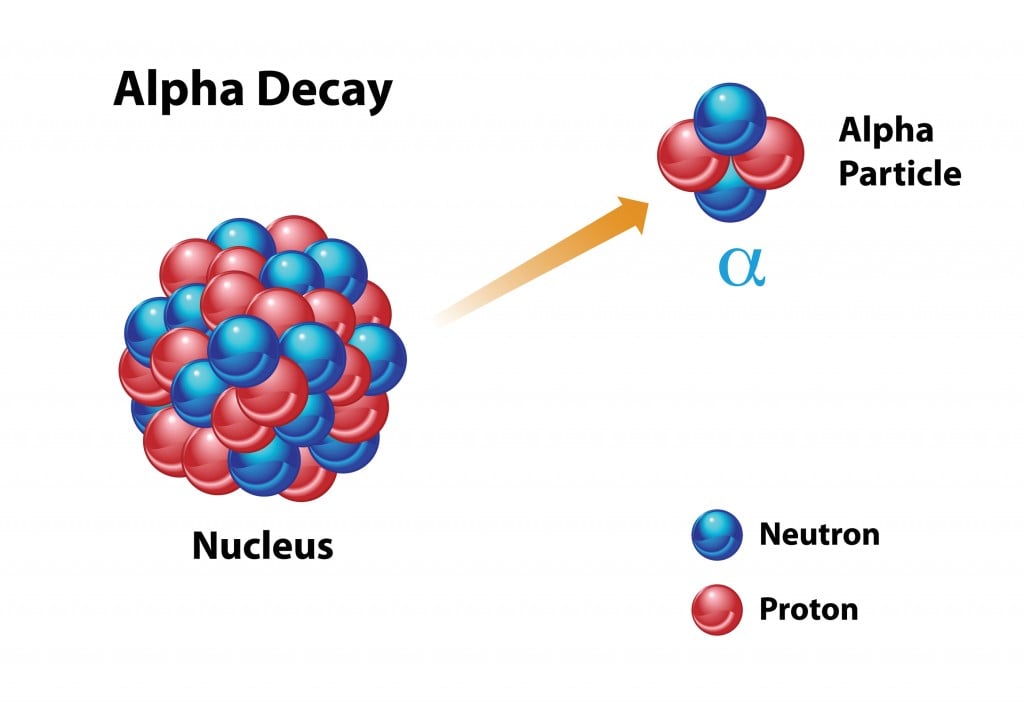 When beta decay occurs, a stream of beta particles (electrons) will be ejected from the nucleus, causing one of the neutrons to transform into a proton (β- decay) or a proton will change into a neutron (β+ decay). The atomic number will increase or decrease by 1, although the atomic mass will remain unchanged. A common example of beta decay is the atomic breakdown of Strontium-90 into an Yttrium-90 isotope, which releases an electron during this β- decay process. A beta particle is about 8,000 times smaller than an alpha particle, and is therefore considered more dangerous, as it can penetrate clothes and skin, unlike alpha particles, though it is typically blocked by walls, and only travels a few feet when emitted. 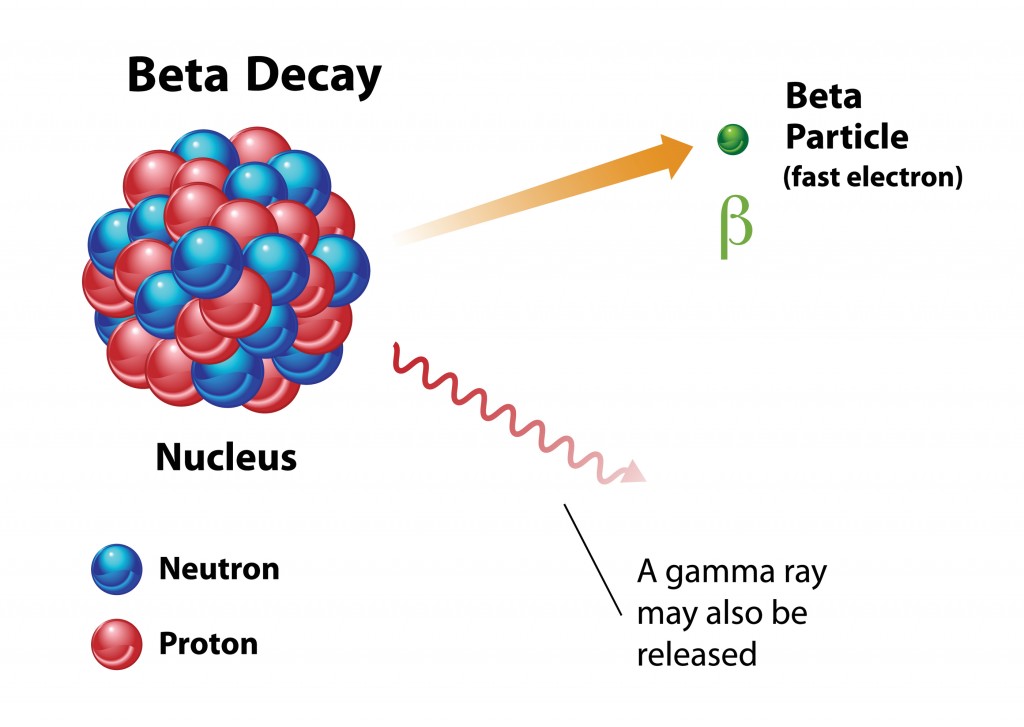 Also Read: Why Do Elements Exist If They Have Such Short Half-lives?

While the previous two forms of decay emit helium atoms and electrons/positrons, gamma decay results in the emission of high-energy photons, allowing the nucleus to reach a more stable form, without changing the atomic number or mass number. This is the most dangerous form of radiation, as the emission has no mass and can pass through almost any substance. It takes several inches of lead or multiple feet of concrete to effectively block these “gamma rays”, which will pass directly through the body without a second thought, affecting everything from your bone marrow to the tissues of your most sensitive organs. Gamma rays are essentially a form of light, a powerful type of electromagnetic radiation that is born in exploding stars and as a result of other nuclear reactions.

Now that you have an understanding of radioactive decay, the idea of half-life becomes much easier to conceive. As radioactive isotopes break down into more stable forms through alpha, beta and gamma decay, the amount of the original “parent” material is diminished. Now, there is no way to tell precisely when a given nucleus will undergo radioactive decay, as atoms are incredibly small and unpredictable. However, when considered in large numbers (millions, billions or trillions of individual atoms), the statistical likelihood of radioactive decay can be measured. 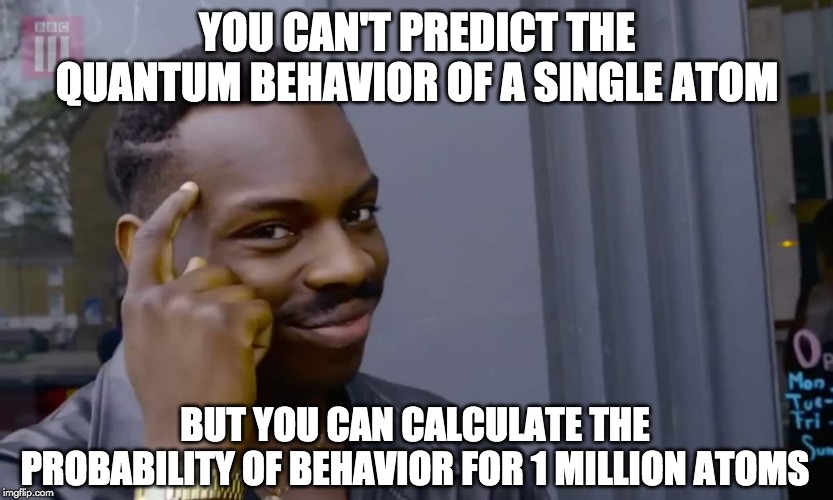 The quantum behavior of individual atoms is impossible to assess, but the behavior of a large group of atoms is subject to probability, and thus a reliable level of statistical certainty. In nuclear physics, half-life is a useful measuring stick for how quickly a radioisotope will undergo radioactive decay, or how long a stable isotope will remain intact. It is perhaps easiest to understand half-life with an example. Let’s consider the half-life of radioisotope nickel-63, which breaks down to copper-63 through beta decay.

Nickel-63 has a half-life of 100 years, so let’s consider a sample of this radioactive element composed of 1,000,000 atoms. After 100 years, approximately 500,000 atoms will have broken down into copper-63, a stable isotope that will no longer emit radiation or decay further, while 500,000 radioactive nickel-63 atoms will remain. Let’s extrapolate this out a bit further…

When a radioactive isotope breaks down into a stable isotope of “daughter” material, it will not decay further or emit any more radiation. Thus, over time, the same of radioactive material will become less dangerous, as it will not be emitting as many alpha, beta or gamma particles. After 10 half-lives, there will be less than one-thousandth of the original radioactivity from the sample, and will generally be considered completely harmless.

The rate of each material’s radioactive breakdown remains constant, but every isotope has a different half-life, ranging from Hydrogen-7 (1 proton and 6 neutrons), with a half-life of 2.3×10−23 seconds, all the way up to Tellurium-128 (52 protons and 76 neutrons), which boasts a half-life of 2.2×1024 years—150 trillion times longer than the age of the universe!

When you start looking at things on an atomic or quantum scale, it becomes far more difficult to be precise in relation to a single atom. When looking at a single atom of uranium-235, it is impossible to know when or if it will undergo radioactive decay and become a single atom of thorium-231. However, when observing a million atoms of uranium-235, it is an accurate statistical probability to say that half of the atoms will have alpha decayed within 703 million years!

While half-life is typically associated with nuclear physics, it is also an applicable and useful concept in medical technology, such as in the pharmacokinetics of certain drugs, as well as in the use of pesticides in plants and the radiometric carbon dating of dinosaur fossils! Half-life calculations are a way to make sense of the unpredictable quantum realm, and be able to assess the long-term impact of radioactive materials on both the environment and life on this planet!