Planet Earth is believed to be inhabited by over ten million species of organisms, and even though members of these species are not immortal and do eventually die, the species do not entirely cease to exist. This continuation of a particular species generation after generation happens through “reproduction”. Reproduction is the biological process by which an organism gives rise to its young or progeny similar to itself. There is a huge range of diversity in the biological world, so bacteria will reproduce differently than a multicellular plant and a plant will reproduce through a mechanism that is very different from us humans.

What is a gamete?

How are gametes formed?

The female and male gametes (oocytes and sperm) are formed by a process of gametogenesis. All the cells of the body contain a fixed number of chromosomes, which are characteristic to the species to which they belong. For example, onions have 16 chromosomes, a garden pea has 14 chromosomes, and in the case of humans, all our cells contain 46 chromosomes, also called diploid cells. The exception to this is our gametes—the sperm and ovum—which contain only 23 chromosomes each (haploid cells). This reduction in chromosomes happens through the process of meiosis; it is also referred to as reductional division, as the chromosomes in daughter cells are reduced from a diploid to a haploid number.

The significance of meiosis during gamete formation 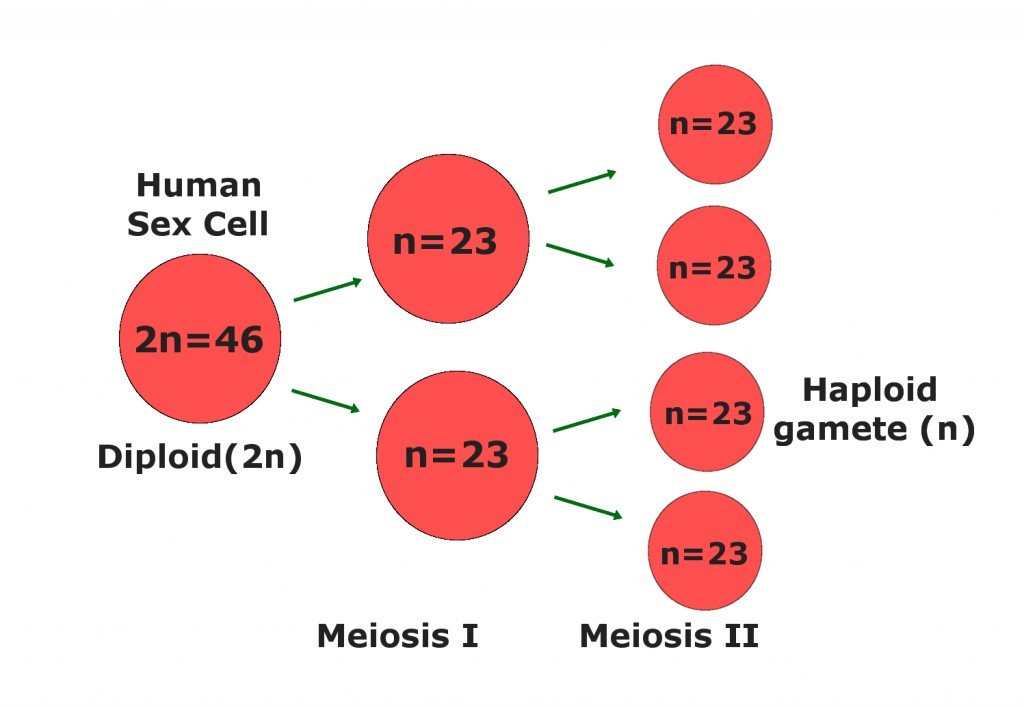 All the cells of our body, barring the gametes, divide by mitosis, wherein one parent cell produces two daughter cells, but meiosis results in four daughter cells with half the number of chromosomes. Let’s understand why the gametes go through this different process of meiosis. 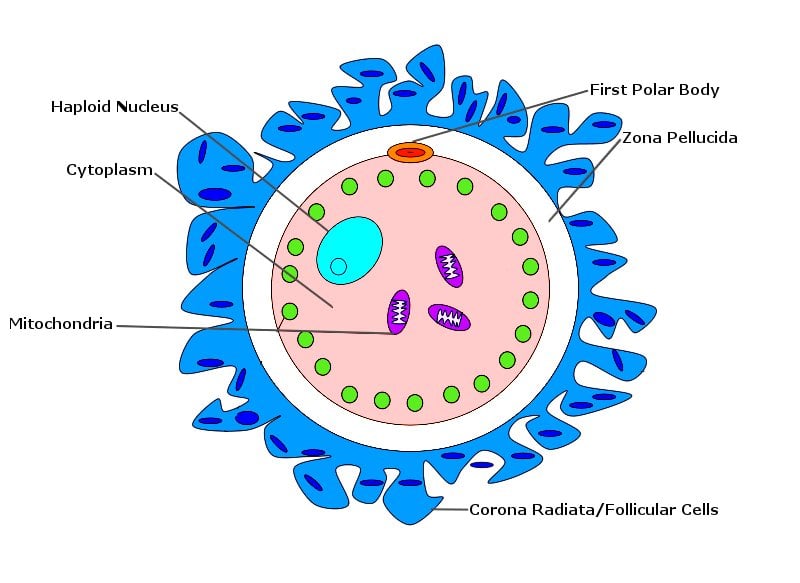 The female gamete or ovum is more commonly known as the egg and is produced by the ovaries. The ovaries produce approximately 2 million primary oocytes in a newborn girl, but this is reduced to around 40,000 primary oocytes when the girl develops through childhood and reaches adolescence. Out of these, only around 400 become secondary oocytes and react to the influence of hormones. One of these eggs ripens roughly every 4 weeks and is released at ovulation until the girl reaches about 45-50 years of age, a stage of life called menopause. Compared to a sperm cell, the egg is a large, round structure measuring about 100-120 microns in diameter; in fact, the egg is one of the largest cells produced by the human body! The egg being larger than the sperm is by design; the large size of the egg allows it to hold in cytoplasm and store food that is needed to nourish the embryo if fertilization takes place. The egg also has a nucleus, which contains 23 chromosomes from the mother. The ovum or egg is enclosed in a thick, protective layer called the zona pellucida, on the outer surface of which are several layers of cells called the corona radiata. The zona pellucida physically supports the bulk of the ovum from the outside and protects it from physical damage, while functioning as a species-specific barrier that only particular sperm cells (i.e., those of the same species) can penetrate. The male gamete or the sperm is much smaller than the egg, and is paddle-shaped with a rounded head (4-5 microns long and 2-3 microns in width), as well as a long tail or flagellum (50 microns long), which provides motility to the sperm. The neck of the sperm is the junction between the head and tail. The head of the sperm contains the nucleus, with 23 chromosomes, covered by a cap-like structure called an acrosome, which contains enzymes. These enzymes help the sperm penetrate the corona radiata and the zona pellucida layers of the egg during fertilization. The tail of the sperm is made up of three segments, namely the middle piece, principal piece and end piece. The middle piece contains the mitochondria, which provide the sperm with the energy required for motility. Several hundred million sperm are produced in males every day from puberty onwards.

The role they play in each other’s life!

It should be clear by now that gametes are necessary for the fertilization and formation of the zygote and hence reproduction in general. However, unless they meet and encounter each other, the sperm and egg just die very quickly. The mature sperm dies within 45 hours of being released and the egg dies within 24 hours of not meeting a sperm. The egg—with all its complex mechanisms, cytoplasm and nutrients—has all the machinery to become a brand new human being, but without the contribution of the sperm, it is unable to carry out the basic function of reproduction. Fertilization is therefore the union of male and female gametes, eventually resulting in a new life, wherein the sperm and the egg have equally important roles to play.