A zygote is the simplest form of life, so once a zygote is formed, it proceeds to split and divide into new cells that organize and form more complex structures. Around 30 hours after the zygote is formed, the process of mitosis (cell division) begins…

Imagine that you’ve gone to a flea market with your folks and it’s extremely crowded. Have your parents ever said to you, “It’s alright if you get lost in the crowd, we’ll get another kid just like you!” This probably hasn’t happened because (a)– your parents love you, and (b) – there’s no one else like you in the world; you are a unique, one-of-a-kind individual. You are composed of half your dad and half your mom, and no one else in the world has the same combination of genes as you. The beginning of this uniqueness starts from a single cell called the zygote.

What Makes a Zygote? 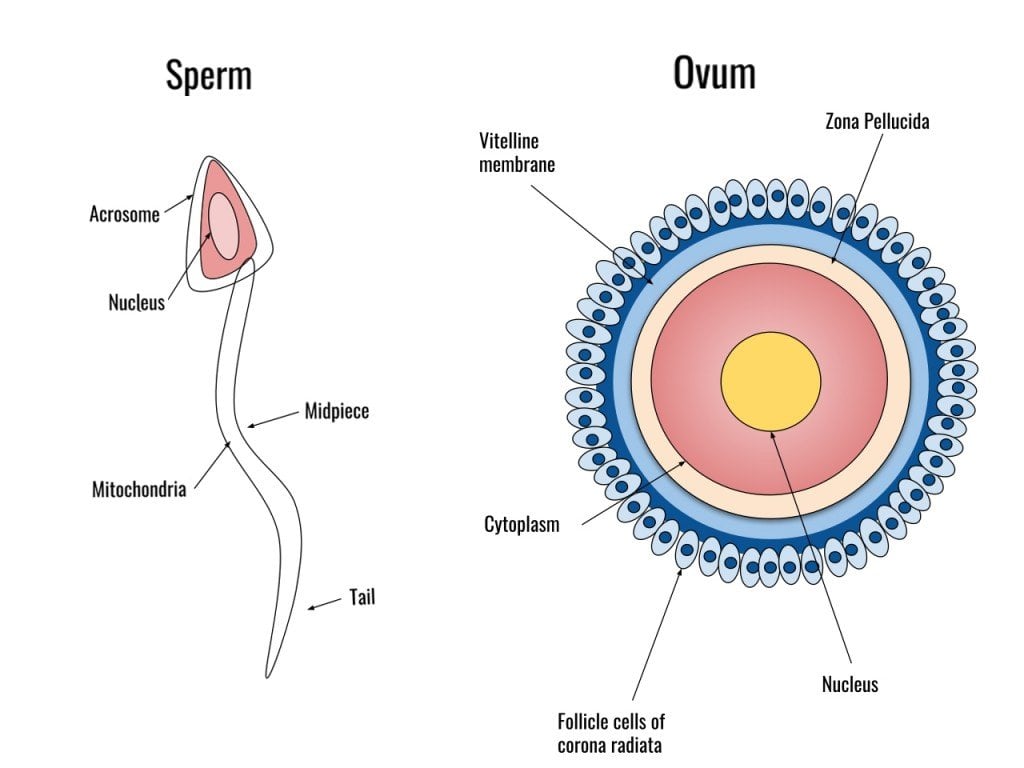 Eggs are large, symmetrical and non-motile cells, whereas sperm are small, asymmetrical, motile cells with a tail, mid-piece and head. During her reproductive years, a female releases one egg each month from her ovaries, which passes down the Fallopian tube and moves towards the uterus. If a sperm happens to meet the egg in the Fallopian tube, the fusion of these two gametes takes place in the following four stages: 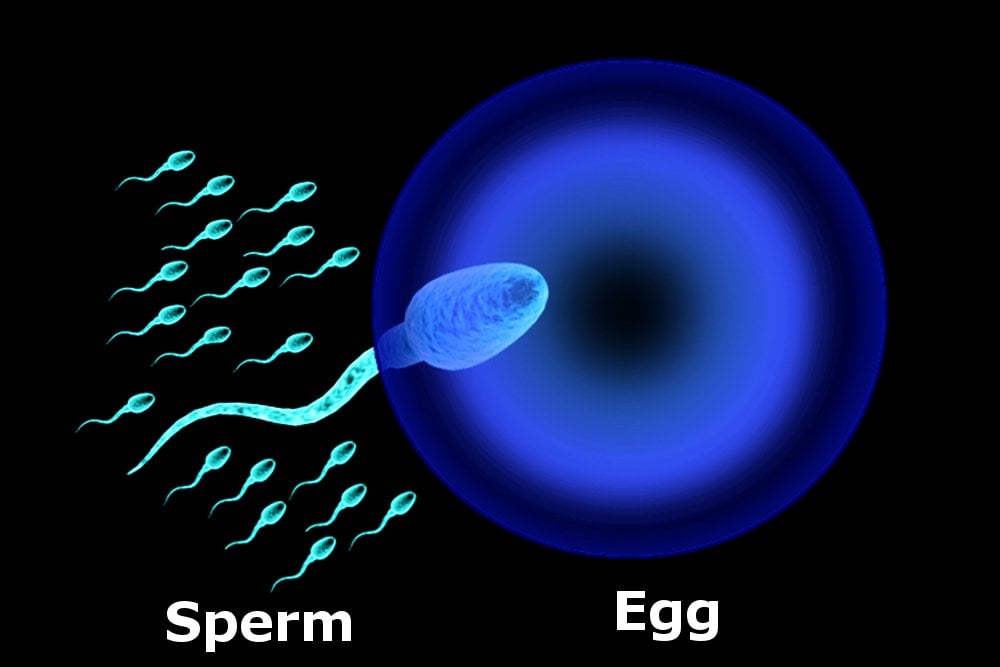 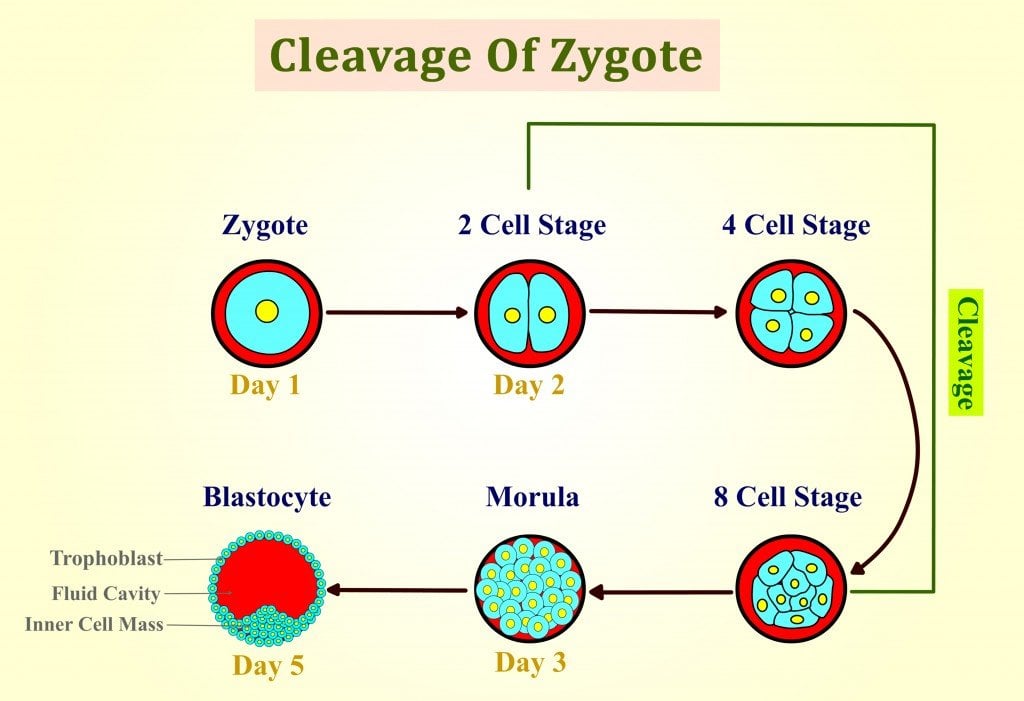 A zygote is the simplest form of life, so once a zygote is formed, it proceeds to split and divide into new cells that organize and form more complex structures. Around 30 hours after the zygote is formed, the process of mitosis (cell division) begins, which increases the number of cells without any increase in the zygote’s total size. This is possible because, with every division, the size of the cells becomes smaller and the number continues to double. This process is called “cleavage” and the cells of the dividing zygote are called “blastomeres”. At this stage, the zygote is covered with an outer covering called the zona pellucida.

Once the zygote reaches the eight-celled stage, the blastomeres arrange themselves tightly against each other; this is called “compaction”. When there are 12 to 32 blastomeres present, the structure resembles a mulberry and is now called a “morula”. The cells of the morula give rise to the cells of the embryo, as well as cells that form the structures supporting the developing embryo. Four days after fertilization, the morula moves into the uterus and a fluid-filled cavity is formed. This structure is called the “blastocyst”. As the fluid in the fluid-filled blastocyst increases, two types of cells are seen: the “embryoblasts” (cells that give rise to the embryo) and “trophoblasts” (cells that give rise to the supporting structures of the embryo). These are the very earliest stages of how you were formed!!

What’s so special about the zygote?

Now, we know that the first cell that led to us is the zygote, but there are a few things that make the zygote really special. Let’s take a look at those characteristics below.

Genetically unique zygote – the reason for variety in the human race!!

Have you ever wondered why you have brown hair, but your sibling’s hair is black? Or perhaps why you have hazel-colored eyes, but your mom’s eyes are blue? Why is your dad balding, but your uncle isn’t? Physical traits like hair color and the color of your eyes are all determined by the genes that we inherit from our parents. These genes exist on strands of chromosomes; we all have 23 pairs or 46 chromosomes as a part of our normal genetic makeup. Once fertilization takes place and a zygote is formed, it inherits half of its chromosomes from the mother and half from the father, but these chromosomes come together in a new pattern that isn’t present in the mother or father, which makes it entirely unique. Crossing over of parental chromosomes in the zygote results in the “shuffling” of genes, thereby producing an individual that is unlike any other person. This mechanism forms the basis of biparental (from 2 parents) inheritance and brings about such miraculous variation in the human species. This shuffling of genes in the zygote makes you unique and truly one of a kind!

The totipotent zygote – it creates everything from nothing!

We all know that humans are multicellular organisms with specialized cells that are grouped together to form different organs that carry out various functions. However, we now know that before we develop this giant machine of cells, we were just a single cell called the “zygote”. Just imagine that a single-celled zygote divides countless times to form more and more cells to turn us into giant humans! A zygote has the unique ability to make any kind of cells; your heart, nerves, muscles… you name it and it comes from this tiny zygote. This potential of the zygote to develop into any kind of cell found in the human body is called totipotency, and is why a zygote can create an entire organism from a single cell.

To summarize, it’s safe to say that the zygote is the first cell that gives rise to an entire individual. The unique genetic makeup of this tiny zygote makes us different from the billions of other humans that exist on Earth!