mRNA, rRNA and tRNA are involved in making proteins. Other non-coding RNA, such as microRNA, are related to epigenetics, which control gene expression.

In 1868, Friedrich Miescher discovered a molecule unlike any other previously known in a cell—nucleic acids. Since then, the nucleic acids in the cells—DNA and RNA—have risen in prominence amongst the molecules of life. The race to solve the structure of DNA is famous in the annals of scientific discovery, and decoding its secrets has earned many scientists their Nobel Prizes.

However, the other nucleic acid, RNA, is showing itself to be an equally interesting and challenging molecule to study. Its role in the cell isn’t as straightforward as it is for DNA, giving scientists some exciting avenues of investigation. So, what exactly does this molecule do in the cell?

Structurally, RNA is the single-stranded cousin of DNA. Like DNA, they are made up of four bases—Adenine (A), Uracil (instead of the DNA Thymine), Cytosine (C) and Guanine (G). The sugar molecule in RNA has an oxygen molecule, whereas the DNA molecule doesn’t. Hence the names—deoxyribonucleic acid and ribonucleic acids.

As a molecule, RNA is more flexible than DNA’s rigid double helix. It can be helical or fold into a variety of different shapes, such as the famous hairpin loop of tRNA.

This is (one of the) structures of RNA. It is composed of the four nitrogenous bases, similar to DNA.  (Photo Credit : ShadeDesign/Shutterstock)

The instructions that DNA represents are for making proteins. Proteins are the building blocks of life and help to make other building blocks, such as carbohydrates or lipid structures.

Think of DNA as an ancient book containing all the information of life. Such a precious document must be preserved at all costs, so there should be no careless flipping of its pages. RNAs are like photocopies of pages from the ancient book of DNA. The cell doesn’t need to worry about damage to the copies, since the original is intact.

The first key RNA type involved in making proteins is messenger RNA or mRNA. An mRNA is a small photocopy of the DNA that holds the protein-making blueprint. mRNA is synthesized through a process called transcription. It is the messenger between the DNA and the machines that make the proteins—ribosomes.

The mRNA transcript is made in the nucleus, where the DNA is located, and then moved to the cytoplasm, where ribosomes are located. The process of reading the mRNA and making a protein is called translation. This is the second step in protein synthesis. Here, in the cytoplasm, are the next two major RNAs of the cell—ribosomal RNA and tRNA. 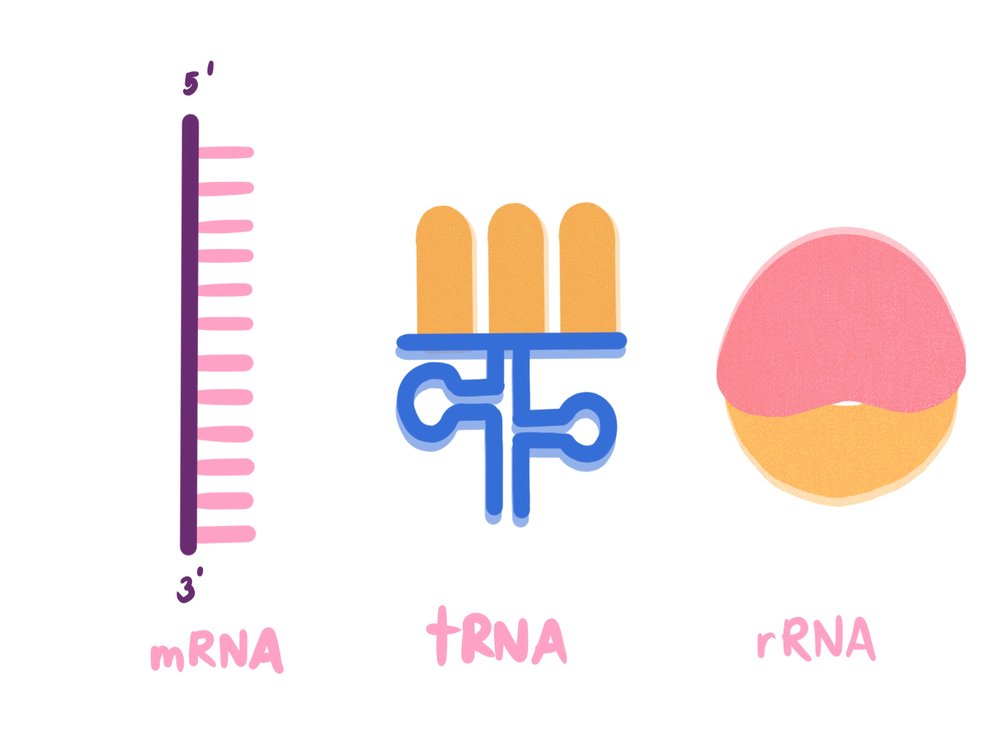 The big three RNA involved in protein synthesis – messenger RNA, transfer RNA, and ribosomal RNA. In this picture, the rRNA is the ribosome in which the rRNA is located, associating with various proteins of the ribosome.  (Photo Credit : TATLE/Shutterstock)

For a more detailed look into the process of protein synthesis, read here.

How Are RNA Made?

This is the function of the common three forms of RNA, but in the last two decades, scientists have uncovered a Pandora’s box of different RNAs that aren’t directly involved in protein synthesis. These RNAs are broadly dubbed “non-coding RNA” (ncRNA).

These small RNA (sRNA) are made of 18 to 30 nucleotides, and consist of various subtypes, such as microRNA (miRNA), small interfering RNA (siRNA) and piwi-interacting RNA (piRNA). There is unusually shaped RNA like hairpin RNAs and circular RNAs. There are RNAs for the nucleus, nucleolus, cytoplasm and even for outside the cell. There are RNAs that are derived from transposons and viruses, and finally, there are the big three involved in protein synthesis. The question is… Why are there so many other RNA types and what do they do in the cells? 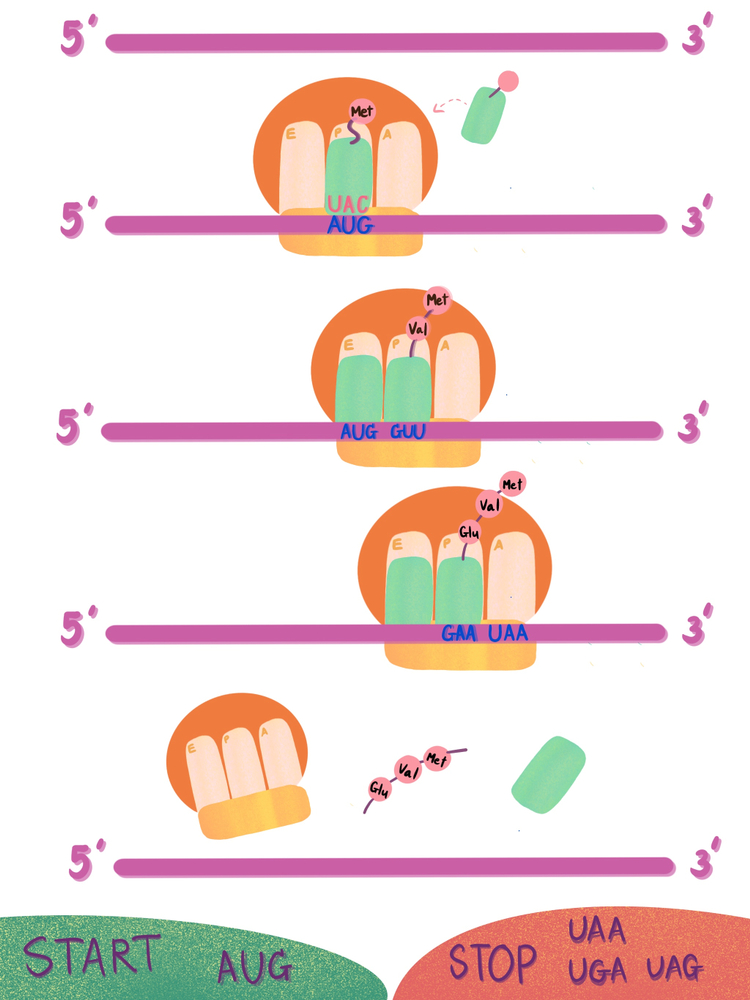 The process of translation: the ribosome making a protein using the mRNA transcript. (Photo Credit : TATLE/Shutterstock)

What Do RNA Do In A Cell?

All genes aren’t always expressed in a cell, because cells only express a protein-coding gene when they require that specific protein. This control over when, how and how much of a gene is expressed is called gene regulation.

Imagine this process as “making notes” on the RNA photocopy. Since it isn’t the actual book itself, the cell can alter the RNA photocopy any way it likes. One could annotate it, strikethrough certain parts, create poetry out of it, or simply carry out the instructions in the chapter. We could also write on top of the photocopy, ‘DON’T MAKE THIS PROTEIN” or just archive the photocopy for a rainy day. 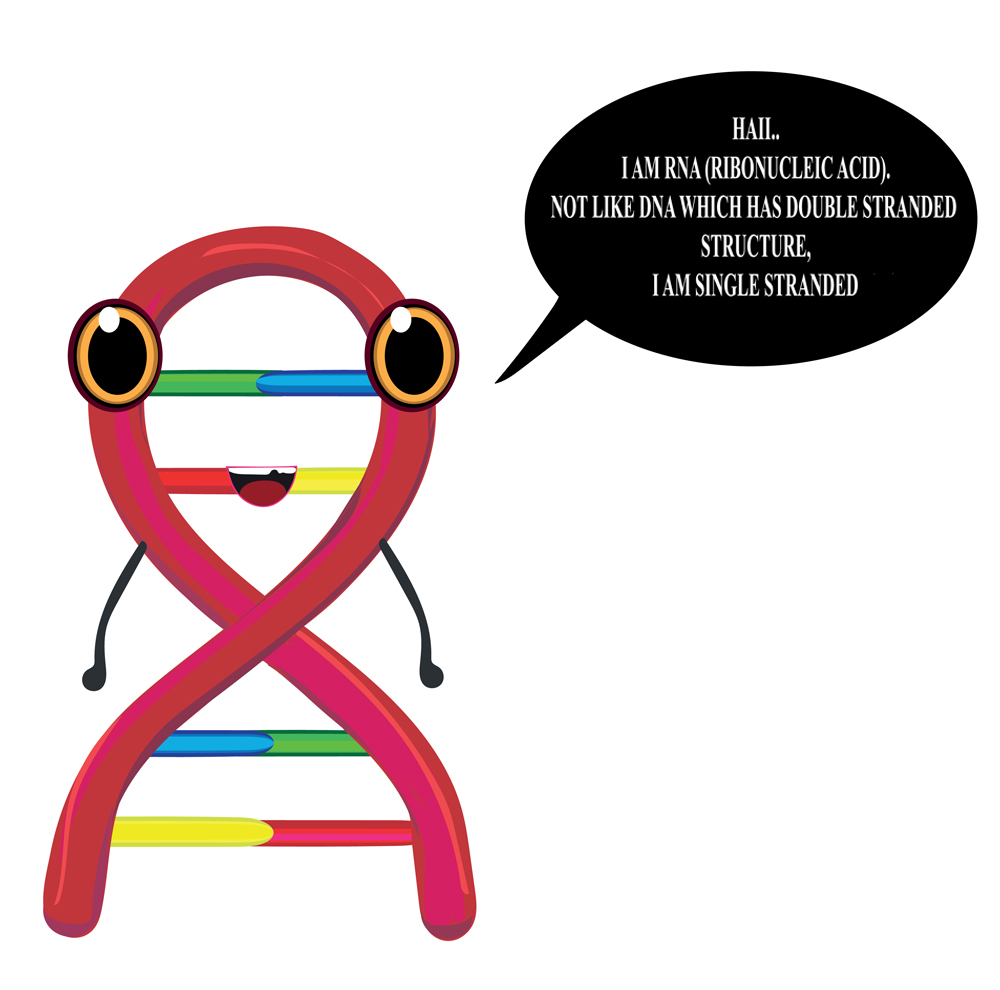 This is the essence of gene regulation. It appears that ncRNAs play a role in controlling genes, while microRNA (miRNA) and small-interfering RNA (siRNA) silence genes by targeting mRNA transcripts of genes that don’t have to be expressed. The targeted mRNA transcript is then destroyed, a fate that might await roughly 60% of genes.

ncRNA—like PIWI-interacting RNA (piRNA), and small nuclear RNA (snRNA)—act through epigenetic mechanisms. Epigenetic literally means “on” or “additionally” to DNA. They are mechanisms that help the cell regulate the information of the DNA by making slight changes to the DNA externally, without changing the sequence of letters. This includes adding chemical tags or methyl groups to the DNA and coiling the DNA looser or tighter.

These mechanisms have implications when it comes to cells differentiating, such as becoming a skin cell or a liver cell from a stem cell. snRNA play a key role in one’s innate immunity, and many other RNA types might be potential targets for drugs. 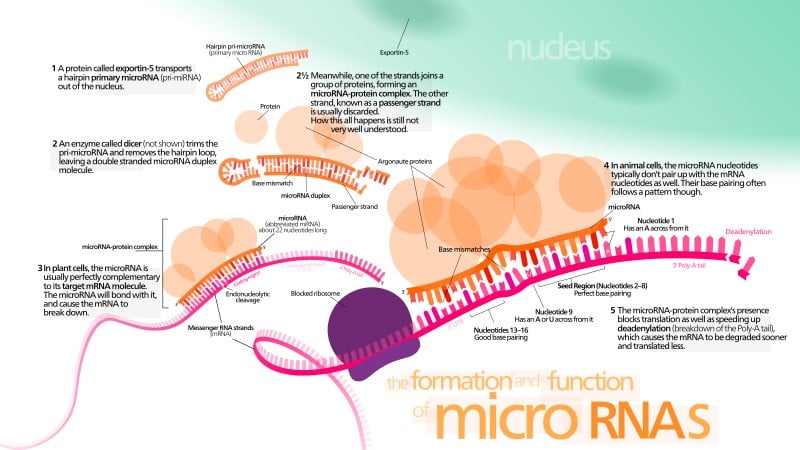 A detailed look at how microRNAs, a type of ncRNA, might work in the cell.  (Photo Credit : Wikimedia Commons)

Are All RNAs Useful?

However, not all that glitters is gold. ncRNA represents a popular branch of genetics and epigenetics research, but it has an essential question looming over its head—is all the ncRNA functional? For the ncRNA listed above, scientists have delineated how they work well enough to say with certainty that they are important elements of the cell.

For many new ncRNAs that are still being discovered, the function seems a bit more questionable. Many scientists are questioning whether assuming function because of existence is Panglossian. Some of these RNAs might just exist as a by-product of another process!

This is an exciting field for biology. The world of epigenetics and RNAs has the potential to give us new therapies for diseases and better illuminate how many diseases work. As we find out more about how the genome’s function and mechanisms, we’ll establish a better understanding of why the cell has so many RNA types and what each variety is responsible for in the cell!