There are three main hypotheses for how viruses originated. They are genetic elements that could have either evolved from cells or been descendants of ancient self-replicating RNA molecules.

Viruses are microscopic parasites that live all around us on our planet. You may be shocked to know that there are more viruses on Earth than there are stars in the universe!

Viruses, unlike other earthly life forms, are considered to be neither dead nor living. These microorganisms have one purpose in life—to infect other living beings, be it bacteria, animals or plants.

But where did these infectious agents come from? Well, no one really knows the answer, although science does suggest three possible theories or hypotheses.

The progressive hypothesis, as the name suggests, states that viruses progressed or arose from small, simple genetic elements. This idea is similar to how we humans progressed from apes.

This theory argues that viruses are just special pieces of genetic information. These genetic elements somehow gained the power to move in and out of living cells on their own. After all, a virus is basically just a piece of DNA or RNA protected by a protein coat.

What’s most intriguing is that this hypothesis suggests viruses could have come from our own genes. There are special genes we have in our genome called transposons. Transposons are also called ‘jumping genes’, which is why they’re considered so special. These genes have the ability to jump from one location to another in the genome.

These genes are also considered to be quite selfish. They “wanted” themselves to be duplicated and given more energy and attention. Like siblings competing for a parent’s affection, these genes “wanted” to be the favored. However, this wasn’t feasible, because for life to thrive, all genes are important and must be considered.

The ideology behind this theory is that viruses are actually jumping genes that threw a tantrum for not getting enough attention and ran away from home. That’s why the progressive hypothesis is also known as the “escape hypothesis”. They gained the ability to leave their cells, formed a partnership with some proteins and together became able to infect other cells. After infection, their DNA/RNA is forced into the host’s genome and duplicated and processed. They make new copies of themselves and then continue infecting other cells.

RNA viruses like the human immunodeficiency virus (HIV) work like these transposons. Its RNA enters a cell and an enzyme—reverse transcriptase—converts the RNA to DNA. This DNA then enters the host’s genome, forcing the host at its own cost to start making the viral proteins. 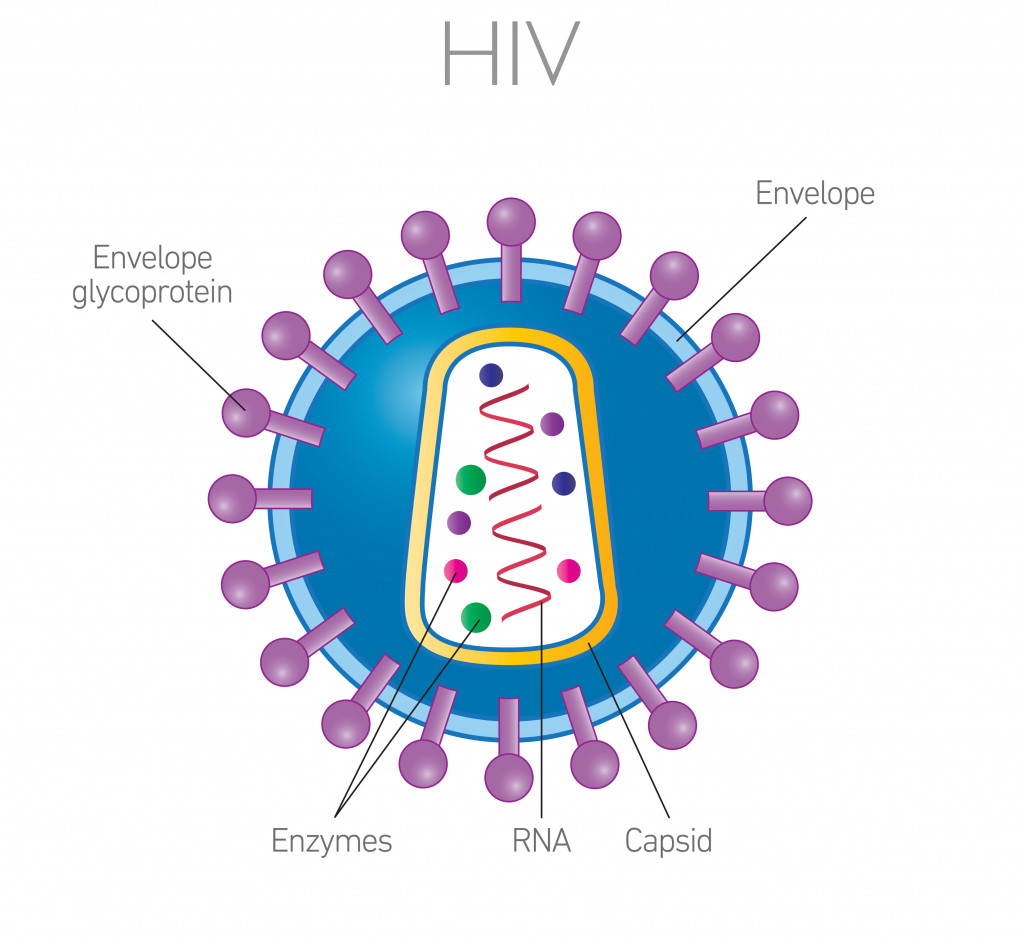 However, what this hypothesis doesn’t explain is how some viruses have unique structures, such as spike proteins, that cells don’t have.

This theory is the opposite of the progressive one, as the name suggests. This theory doesn’t argue that viruses progressed and adapted to think for themselves; rather, it states that they are reduced parasitic forms.

There are some really large viruses, such as the smallpox virus or the Mimivirus (the world’s largest virus). Even though Mimivirus is still 50x smaller than the diameter of a hair strand, compared to other viruses, it’s a monster! 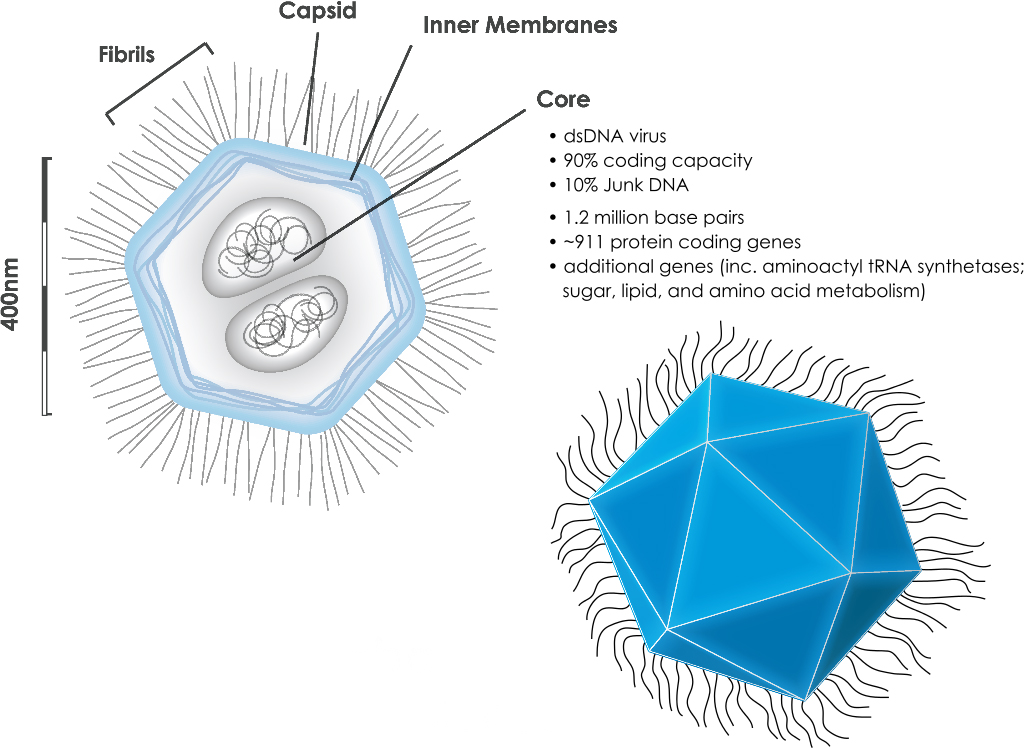 With time, one organism may have become over-reliant on the other, thereby losing its essential genes—those required to multiply and carry out metabolic processes. It was an evolutionary decision to get rid of these excess genes. There was no need to waste time and energy to maintain genes for the replication tools, as the partner did most of the work.

Basically, a perfectly happy symbiotic relationship turned into a toxic parasitic one and… voila: we now have viruses!

This theory is backed up by the Mimivirus’s infection strategy. It infects amoeba, but it’s unusually big and has a large genome. It also carries complex genes that belong to another time.

In summary, viruses were actually dependent cells that evolved into parasitic viruses. However, instead of evolution taking them a step forward, it went a step backwards!

This theory takes an entirely different approach. The above two hypotheses are only possible if cells existed before viruses. Yet, just like the timeless chicken and egg debate, we’re not actually sure which came first.

Before life had formed on Earth, when the environment was volatile and inhospitable, it was full of free molecules. It is hypothesized that the world was filled with competing proteins and nucleic acids. It was basically just a hot soup of battling biomolecules, each fighting for their survival, hoping to be able to duplicate themselves.

Viruses mainly have RNA as their genetic material, so scientists propose that initially, billions of years ago, there were self-replicating RNA molecules. Viruses are therefore simply descendants of these RNA molecules.

But again, we don’t know what came first—viruses or cells. 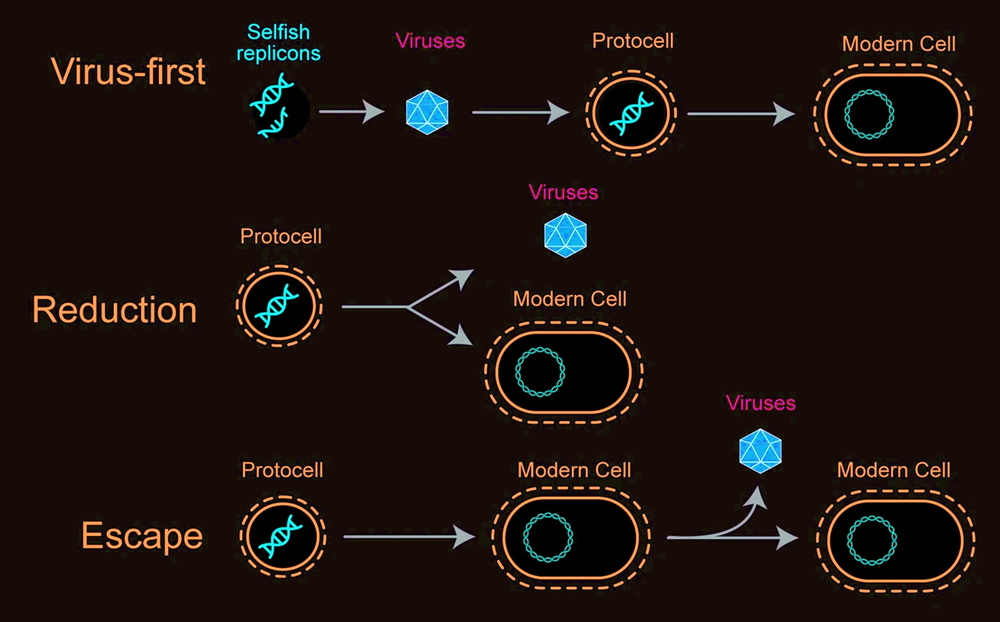 The three hypotheses describing where viruses could have originated.

In the end, we don’t know exactly which theory is correct. Each theory can be argued for, but all have their own shortcomings. For all we know, the answer could be entirely different! Additional theories like the chimeric or symbiogenic theory combine what the above theories postulate.

With data science now in the picture, evolutionary biologists have access to huge databases about an organism’s genetic information.

This all brings us one step closer to the truth. Future research in structural biology and genomics could shed light on the correct answer. What unfolds with all this information may even give us a hint about the origin of life!