Viruses, once they infect a cell, have two life cycle options available. The lytic cycle is their active cycle, while the lysogenic cycle is a dormant phase

Viruses are neither living nor dead. These fascinating creatures dance on border of these two states, actually. When they infect a host, they are considered to be living, but without a host, they don’t meet the bar to qualify as being “alive”. Anything that is not living is dead, right? Or is it? This is just one among a number of factors that makes for a very interesting study of viruses. Another thing to consider is their life cycle. Humans have a constant, non-stop cycle of birth, reproduction, and death, as do most other organisms. Viruses, however, are slightly different, given that they can halt their life cycle, so to speak.

What Is The Lytic Cycle?

A virus, when it infects a host cell, has two possible life cycles through which it can move. Depending on the environmental conditions and various other factors, it can decide which of them it wants to select – the lytic or lysogenic life cycle. A virus has 2 basic components – the viral DNA or RNA, and the protein coat. Some viruses, mainly animal viruses, also contain a lipid envelope. The first step for a virus is to attach to the outer membrane of the cell it wants to attack.

This can either be done through the pores on the membrane surface, or sheer mechanical force. Following this, it penetrates the surface of the host and injects its own genetic material into the cell. The next step is the transcription of the viral DNA. This is the process of converting DNA to RNA using enzymes like RNA polymerase. Transcription is an important process, as it acts like a preparatory step for the following process, which is essential. During transcription, the virus also destroys the host DNA and takes over the full functioning of the cell.

After transcription is the biosynthesis phase. By this time, all of the cell’s machinery is in the hands of the viral DNA. It then uses the host cell to individually manufacture or produce the various parts required to form a whole virus, which primarily includes copies of the DNA, the protein coat and the lipid envelope. Keep in mind that the virus is using the nutrients and other necessary substances of the host cell itself to further its own cause. The second to last step is the maturation process. During this time, the virus orders the assembly of the various components to form new viral cells, known as virions. 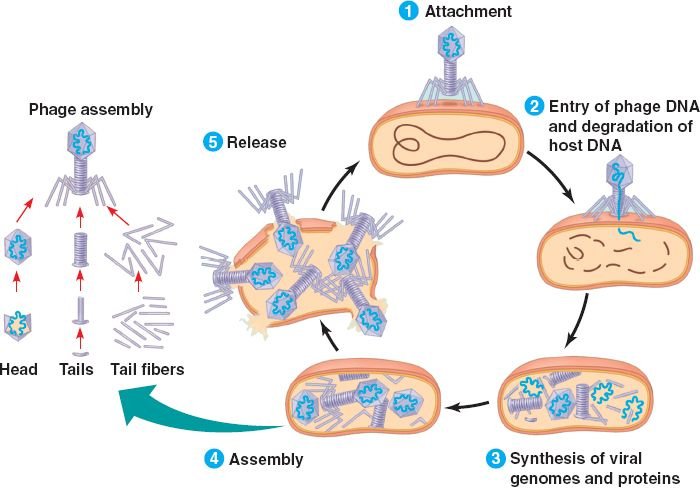 Once a substantial number of virions have been produced and assembled, the virus causes the lysis of the host cell, and the newly formed virus particles are released into the surrounding intracellular atmosphere, fully prepared to attack and enslave many other host cells. The whole process occurs at an impressive rate. The virus reaches the maturation phase within 30 minutes of initially attacking the host cell.

What Is The Lysogenic Cycle?

The lytic cycle is known as the active cycle, whereas the lysogenic cycle is the dormant phase of the virus. Similar to the lytic cycle, it begins with the attachment and penetration of the virus. Once the viral DNA has been inserted into the cell, the host is now said to be infected. Here is where the main difference between the two cycles occurs. In the lysogenic cycle, the viral DNA inserts itself, or incorporates itself into the host DNA, rather than staying separate, as is done in the lytic stage. This is now known as a prophage.

As part of the host DNA, the viral DNA also replicates every time the host cell replicates. Another important point of difference is that the lytic stage results in the immediate formation of multiple copies of the virus. Contrary to this, during the lysogenic cycle, the viral DNA replicates only when the host cell does. It spreads from the host to the daughter cells. Although this is a slower process, the viral DNA is safer, so to speak, as it can avoid detection for longer periods of time than it can in the lytic phase. 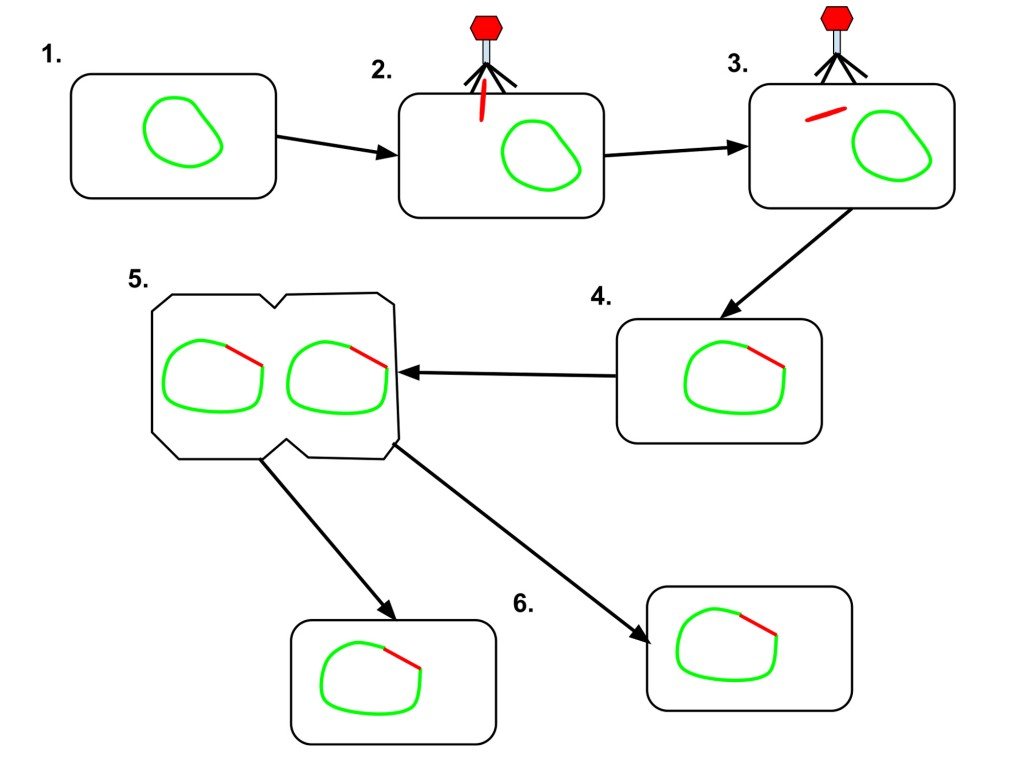 The creation of multiple copies of the virus is done as the host cell divides itself and the phage DNA is passed on to the daughter cells. However, the viral DNA has the mechanism to convert from a lysogenic life cycle to a lytic cycle at any given point – a process known as induction.

It usually occurs due to favorable conditions, exposure to UV radiation, certain chemicals, etc. Viruses that can only undergo the lytic cycle are known as virulent viruses, while those that can undergo both the lytic and lysogenic cycles are known as temperate phages. Cells infected with temperate phages also have some advantages. Since the viral DNA combines with the bacterial DNA, it also passes on certain genes and gives certain additional properties to the bacterial cell.

Also Read: What Is A Bacteriophage?

These bonus properties could increase the virulence of the bacteria itself. In fact, some bacterial cells that are non-virulent have also exhibited high levels of virulence when infected with certain phages. Bacillus anthracis cells, when infected with some phages, have the ability to form biofilms, a property that they don’t normally possess.

Another benefit to the bacterial cells is that if they are infected by a virus, which then enters into the lysogenic stage, no other similar virus can attack the bacteria. Since the original virus is also in the dormant phase, the bacteria can go on functioning as normal. From a human point of view, the lysogenic phase can be extremely dangerous, as the virus continues increasing in number within the body, while the person would be completely asymptomatic and unaware of the growing threat!