Viruses mutate through various biological processes, such as replication error, the virus’ interaction with the host, and external mutagens such as UV rays.

Alpha, Delta, Epsilon, Lambda, Omicron… and so many more to come! Just hearing those names gives me nightmares. Over the past two years, a new name for a fresh COVID-19 variant has been popping up on TV every few months.

That’s because the coronavirus keeps evolving. However, it is not just the coronavirus that changes; all viruses change, even our good old flu virus, which is why the CDC recommends getting a flu shot every 6 months.

These viral changes come from mutations. They are normal and we can’t avoid them, so it’s important to understand how they happen.

If you’ve ever written computer code, you know that even the tiniest changes in the code can change the program in major ways. Similarly, DNA mutations are changes in our biological code.

Mutations are basically genetic changes. Our genetic blueprint, DNA, is composed of four nitrogenous bases; Adenine (A), Thymine (T), Guanine (G) and Cytosine (C). There is also Uracil (U), which is used in RNA instead of Thymine.

A, T, C, and G bases are assembled in particular sequences to make DNA/RNA. Any unwanted change in the sequence is referred to as a mutation. If the blueprint is different, the final product will also be different. A change in the DNA sequence that holds information – a gene – will affects the phenotype, i.e., the traits we physically show, for example. A change in the gene for eye color may result in blue eyes instead of brown ones.

Genetic disorders, such as sickle cell anemia, a blood disorder caused by improperly shaped red blood cells, is due to a change in a single base. 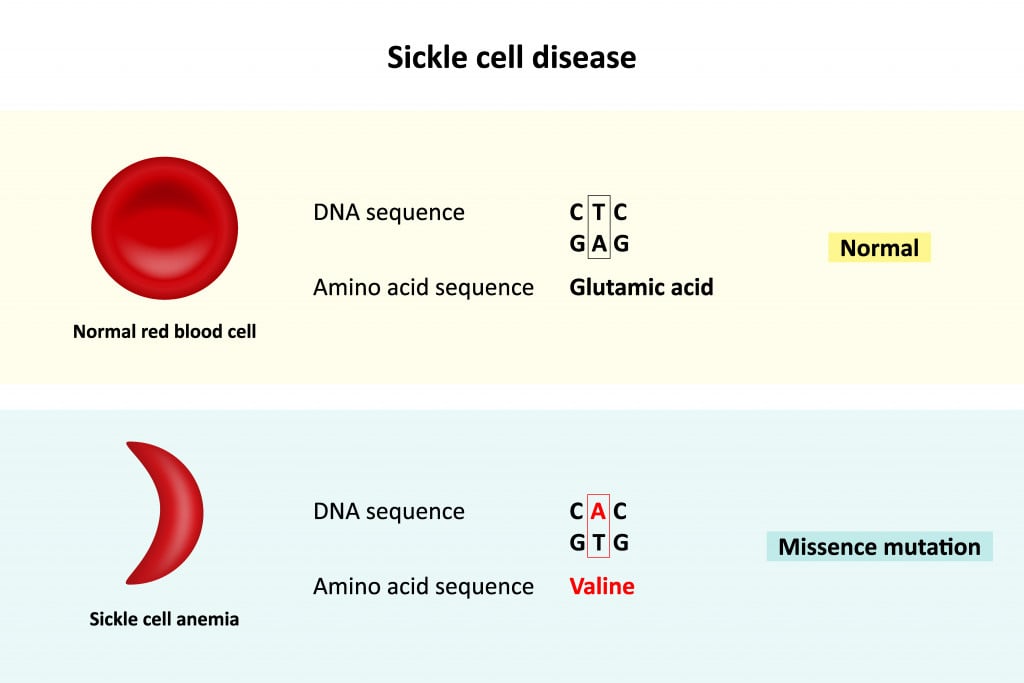 The mutation in the β-globin that causes sickle cell anemia. (Photo Credit : Ody_Stocker/Shutterstock)

However, not all mutations render us useless, at-risk or dead. Some can actually be beneficial, but most have neither a positive nor negative effect. Some mutations don’t even cause any changes, i.e., silent mutations. 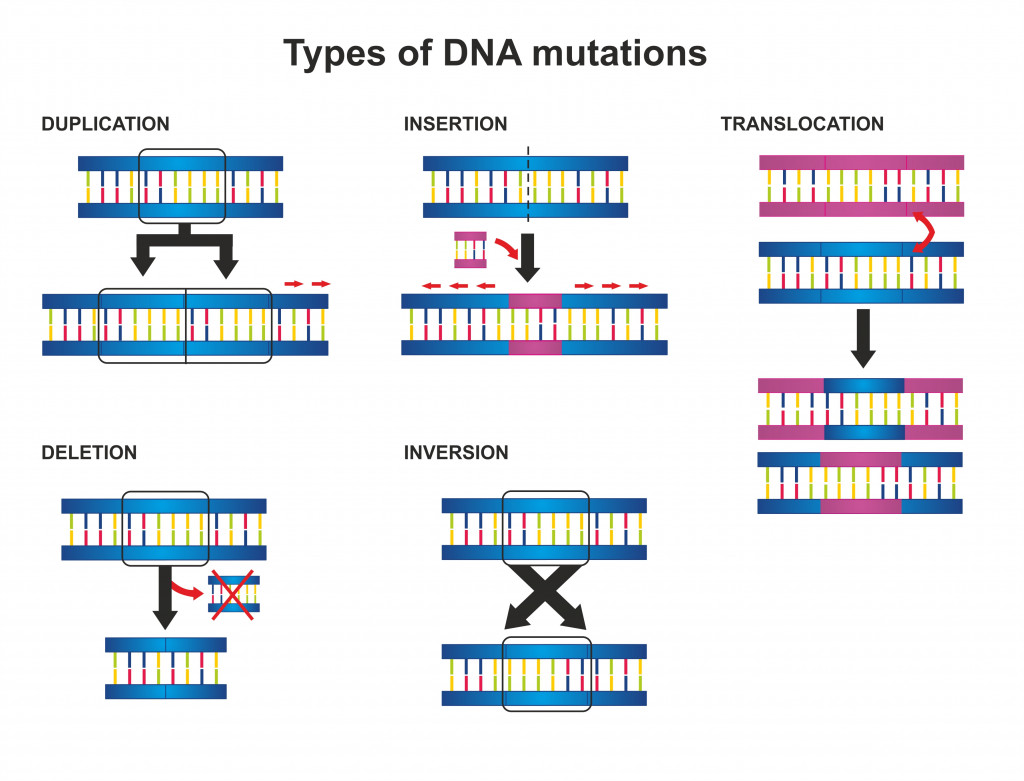 Genetic mutations are possible in any organism that has DNA/RNA. Now, back to the main question at hand.

How Do Viruses Mutate?

Many naturally occurring events can change a virus’s genetic material.

A virus’ genome consists of all the genetic material it possesses in the form of base pairs. Essentially, this is the the entire library for all genes and their instructions for living things.

A virus’ genome is nothing compared to that of a human cell (3.2 billion basepairs), but it can still be thousands of base pairs long. The virus’ genomic material, whether it’s DNA or RNA, is copy & pasted by replication enzymes, mainly viral polymerases.

Viruses lack some of the tools they need to replicate their genetic material. Thus, they infect host cells, hijack their replication machinery, and use them to replicate their genome. Each time a virus infects a cell and duplicates, that’s one replication cycle. So, each time a virus infects more cells and makes more copies of itself, it replicates its genetic material.

How a virus infects a human cell. (Photo Credit : Naeblys/Shutterstock)

While that is the plan, nothing is truly error-free. Each time a virus tries to make copies of its genetic code, there is a greater chances for error. It’s similar to making photocopies of a document. If you make three copies of a document, the likelihood of the copies being flawless is high. On the other hand, create thousands of photocopies and you’ll find some pages with lines missing or with the ink smudged because the Xerox machine heats up and stops working at peak performance.

Similarly, replication enzymes can add incorrect base pairs to the DNA/RNA sequence. With each growing replication cycle, the chances of an error increase. Viruses infect cells and make thousands of copies, so the chances of eventual mutations are high. The mutation rate also varies depending on the genetic material.

Due to these properties, RNA viruses are more likely to mutate than DNA viruses.

When a virus infects a host, the host’s immune system fights back to protect itself. One way it does that is by producing reactive oxygen species (ROS). They are highly reactive and toxic molecules capable of damaging the viral genetic material and causing mutations.

Some hosts, like humans, have certain enzymes called deaminases. These enzymes maintain the pool of nitrogenous bases (A, T/U, G and C). They can reduce their availability so when a virus infects them, it lacks the raw materials needed to replicate the genome.

For example, imagine that a virus infects a human cell. The cell has cytidine deaminase, which maintains the pool of the DNA bases, T and C. If the virus needs to add either T or C in its gene sequence when it tries to make new copies, there won’t be enough. The polymerase will have no other option but to add a different basepair. This forces incorrect nucleotide additions to the genome sequence, causing mutations. It’s similar to a printer running without colored ink. It will still print, but the color won’t be the intended one.

Sometimes if the host is really unlucky, two or more viruses can infect them simultaneously. When they infect the host and try to make more DNA/RNA copies, the viruses combine and share genetic information, causing further mutations.

Viruses floating about in the environment are exposed to the sun’s ultraviolet (UV) rays. UV rays are well known to damage genetic material. As viruses are exposed to UV rays, their mutation rate increases.

Not all viruses are equally susceptible to mutations by UV rays. It depends on their genetic material (DNA or RNA) and the protective protein coat surrounding them.

Will Viruses Ever Stop Mutating?

No, viruses will not stop mutating. However, this is not just viruses… life as a whole won’t stop mutating, as mutations are a major way that life evolves.

Mutations are a lottery system for the genome, because you don’t know whether the mutation will be beneficial or not. If a mutation is harmful, the organism dies and its genetic material is not carried forward. This reduces the chances of this mutation being passed on to further generations.

If the mutation is beneficial, the organism probably does better in its environment as a result. A virus’s main goal is to survive, which it does by infecting hosts and growing. Stronger, more efficient viruses do better at infecting hosts without getting caught than weaker ones.

If a virus can infect different host species, it only increases its survival chances. An example is the coronavirus mutation that allowed it to go from infecting bats to infecting humans. 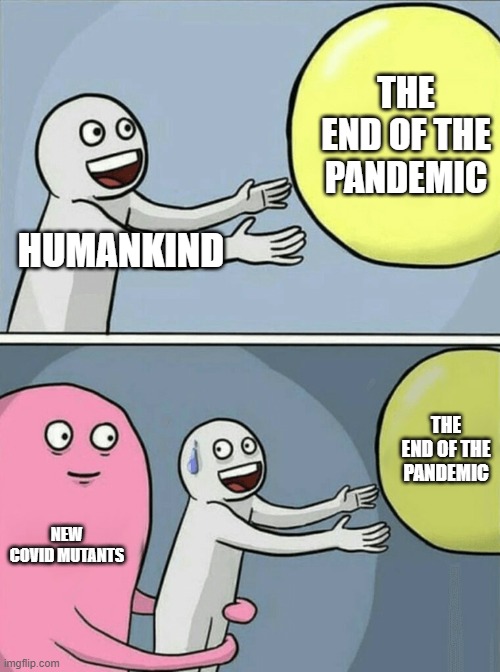 Don’t be afraid. Mutations happen every day and they aren’t all bad. After all, omicron ended up being a less severe coronavirus mutant, despite how easily it could be spread.

Genetic mutations give rise to new species. All living organisms will mutate from time to time. Human DNA also mutates, but our more equipped DNA replication machinery sets us apart from viruses. We have better DNA Repair mechanisms that correct damaging mutations before they can have a negative effect.

We can trace the lineage of viruses and better understand their infection patterns by studying viral mutations. We can track where viruses originated from and how they spread worldwide. This is why so many laboratories worldwide continue to sequence the coronavirus in patients in order to track its progression.