Viruses can infect each other. Sputnik, a 50 nm virus, can infect another giant virus, the mimivirus, which can then infect the amoeba, Acanthamoeba polyphaga.

The scene is Bradford, Britain. The year is 1992. In the water of a cooling tower, scientists investigating a pneumonia outbreak come across what seems to be a parasitic bacteria living inside the amoeba, Acanthamoeba polyphaga. The scientists performed some tests, looked at it under a microscope, decided it was an unusual bacteria, and relegated it to a cluttered corner of scientific investigative interests.

Ten years later, when scientists from France reviewed these findings, the bacteria turned out not to be a bacteria at all, but rather a virus! A very large virus, to be precise.

In their paper titled A Giant Virus in Amoeba, they describe a 400 nm virus (small for our eyes, but huge for the minuscule world of viruses) with a protein capsid from which fibrils flow like trailing locks. Its genetic material, linear double-stranded DNA, is larger than that of many bacteria—1,185 kilobases worth of code! This was the largest virus anyone had ever discovered. 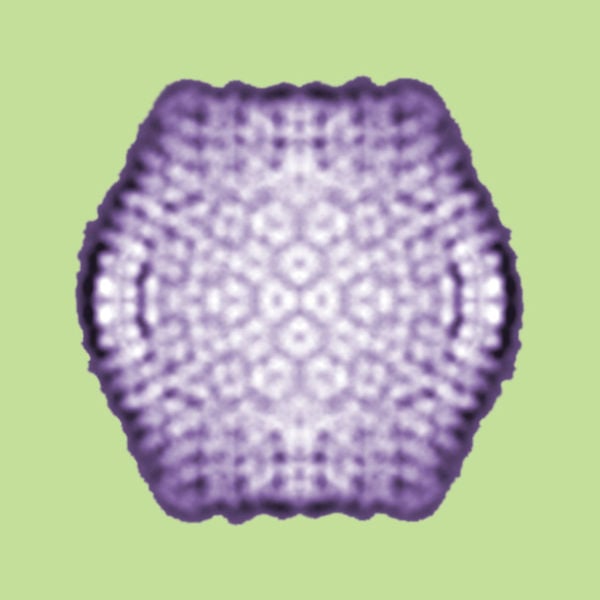 A 3-D model of how Sputnik, the virophage, might look. (Photo Credit : AJ Cann/Wikimedia Commons)

Due to its bacterial masquerading, the scientists decided to call the virus a ‘mimivirus’ or a ‘mimicking microbe’. This particular one is the Acanthamoeba polyphaga mimivirus, or APMV for short.

5 years later, in 2008, another sample of water from a cooling tower in Paris, France revealed an even bigger virus from the same family of viruses, but this time, it wasn’t alone. A smaller viral companion was also present, but it was only present in those amoeba infected with the mamavirus (a close cousin of the mimivirus). A closer look revealed that the smaller virus was not infecting the amoeba; its target was the larger mamavirus.

Sputnik, as they decided to call it, is a small 50 nm virus with a mere 18.343 kilobase of double-stranded DNA. To ensure its survival, it depends on the mimivirus’ pre-constructed viral factory.

How Do Viruses Work?

Viruses are incapable of multiplying on their own. They lack the machinery to replicate their genetic material or build a new exterior shell—the protein capsid. If a virus does have these machines available, they still don’t have any way of producing any energy to power them, as they don’t eat or respire.

For all of this, they depend on a host. They are, in scientific terms, obligate parasites.

A virus will enter its target cell by injecting its genetic material into the cell, leaving its exterior skeleton behind. This genetic material will go on infiltrate the host cell’s DNA and trick the host’s machines to follow the instructions in the viral code, rather than the DNA of its host. The host cell now becomes a factory whose only function is to build viruses.

By using the host’s energy and machines, the virus is able to build anywhere between a few hundred to thousands of copies through one cell. The cell eventually dies, with the viruses breaking it open, where they can go on to infect other hosts.

Many other non-viral parasites work in a similar manner. Leeches are blood parasites, sucking on the blood of their host. Plasmodium, the protist that causes malaria, uses its host’s cells to reproduce and get energy. The cat parasite toxoplasmosis works in a similar way.

When the virus itself is dependent on another living being for its survival, how can it get infected?

How Do Viruses Infect Other Viruses?

The mamavirus sets up a similar system inside its host, Acanthamoeba polyphaga. It uses the amoeba to make more copies of itself and breaks open the amoeba when the job is done. When Sputnik enters, it “steals” the mamavirus’ setup to make more of its own copies.

The infection harms the mamavirus, causing failed attempts, or producing abnormal capsids. As Sputnik creates more of itself, the larger virus loses out. The mamaviruses won’t produce as many copies, reducing its chances of infecting other hosts.

As interesting as this is, it isn’t the first case of one virus using another virus’ machinery to reproduce. Many viruses, called satellite viruses, enter cells that are already infected with another virus, referred to as the “helper virus”, and use the latter’s machinery to reproduce. The difference between Sputnik, a virophage, and satellite viruses lies in the fate of the helper virus. 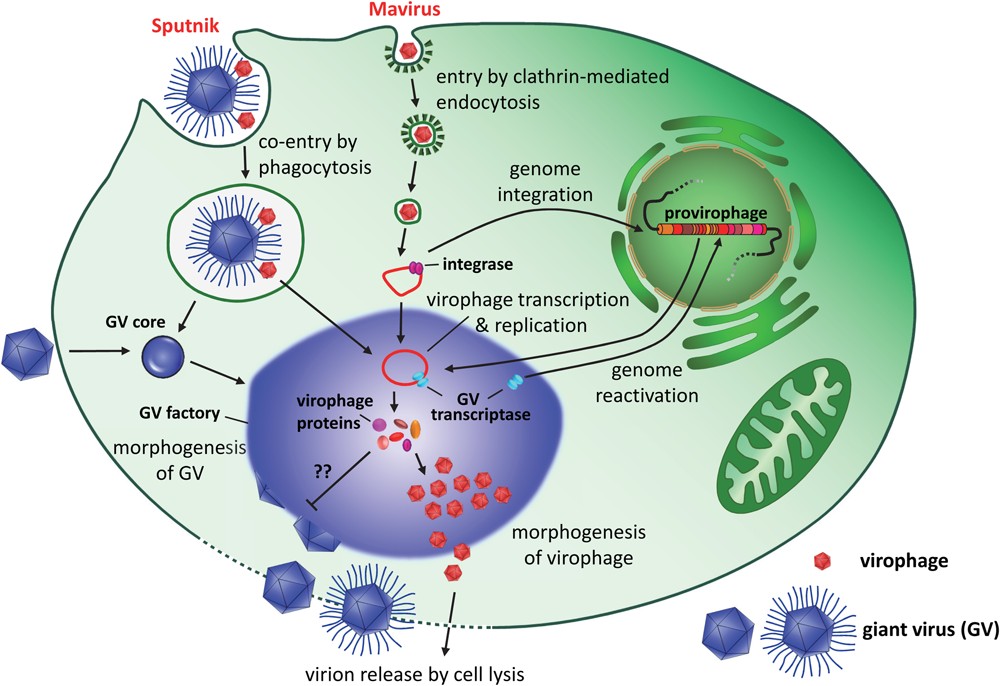 A diagram showing how virophages might infect mimiviruses.  Sputnik directly uses the mimivirus’ factory (the large blue area), rather than going into the nucleus of the amoeba. (Photo Credit : PLOS Pathogens Journal)

However, virophages don’t share. Sputnik usurps the mamavirus’ territory in the amoeba, rapidly reigning supreme. From electronmicrograph evidence and certain genetic testing techniques, we know that Sputnik might solely use the mamavirus’ factory, not needing the cellular host at all. In this way, Sputnik is a true parasite of the larger mimiviruses.

Virophages form a part of the satellite virus pantheon.

Since the discovery of Sputnik, scientists have uncovered a whole new world of virophages and accompanying giant viruses. Our oceans seem to be teeming with virophages. After Sputnik came the Mavirus, which infects Cafeteria roenbergensis, a marine unicellular organism.

Soon enough, the floodgates began opening wider and scientists began finding many more virophages. Three more Sputniks have been discovered, as well as viruses with interesting names like Zamilon (meaning neighbor in Arabic) and another virophage from Antarctica, the Organic Lake virophage. All of these now fall under one family, Lavidaviridae.

Virophages and their ability to infect other viruses have reignited the debate on the nature of viruses. Are they alive? What place do they occupy within our natural world and where do they fit into the evolution of life?

Researchers are now looking at how such ‘virus infecting virus’ infections could cause a transfer of genetic material across different viruses and their cellular hosts. 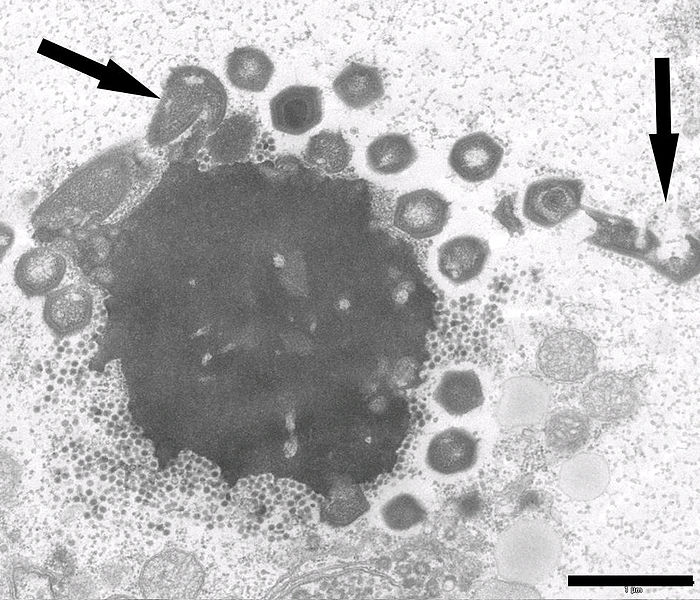 This is an electron micrograph of a mimivirus infected with Zamilon. The arrows indicate abnormal mimivirus (Mont1) particles. (Photo Credit : Morgan Gaia/Wikimedia Commons)

It also raises questions about viral diseases. Would a virophage be able to help us tackle other viral pathogens? This is difficult to say, since there is very little research in this specific field.

In 2012, researchers at the Aix Marseille University in Marseille, France, recorded antibodies against a virophage in two French couples returning from a trip to Laos. This indicates that the body is capable of recognizing and possibly mounting an immune response against virophages.

Whether they can cause diseases has yet to be seen.

Since the discovery of the first virus in the late 1800s, scientists have been confounded by their nature. They live on the edge of life, a conundrum in terms of what one can consider “living”.

With every discovery, they’ve gotten weirder and more complex. Research on virophages is still in its infancy, meaning that no one knows what fascinating mysteries about life on Earth they might reveal!