Cellular stress is any environmental assault that causes damage to proteins, lipids and DNA in the cell. Cells have numerous ways to combat such stress.

Our cells also get stressed. But for cells, stress isn’t doesn’t mean a fast approaching deadline.


This article will examine what stresses a cell and how they manage to deal with the pressure. Understanding this process reveals a great deal about how our body responds as a whole to the environment.

What is cellular stress and what are the different kinds of stress?

Cells, whether prokaryotic (Bacteria and Archaea) or eukaryotic (everything else that has a nucleus), have a small comfort zone in which they thrive. Pulling them out of that comfort zone is stressful. Just like you’d find it stressful to move to another city or country and adapt to life there, cells get stressed when they leave their own comfort zone.

Unusual and unsuitable external conditions for a cell is a stress trigger.

The Encyclopedia of Neuroscience (2009) defines cellular stress as “the cell’s reaction to any adverse environmental conditions that perturb cellular homeostasis, with potential macromolecular damage, that is, damage to proteins, DNA, RNA, and lipids.”

This change in environmental could be that conditions are too salty, too hot, or the new environment in too acidic or basic (a change in pH).

These changes are harmful to the cell because they can hamper its proper functioning. For example, certain enzymes (the molecular machines in cells) only perform their functions in a small pH range. If conditions become too acidic or too basic, the enzymes will stop working which would lead shutting down a whole assembly line within the cell.


Free radicals can cause mutations in DNA, protein denaturing and lipid oxidation which can lead to cellular stress as well. 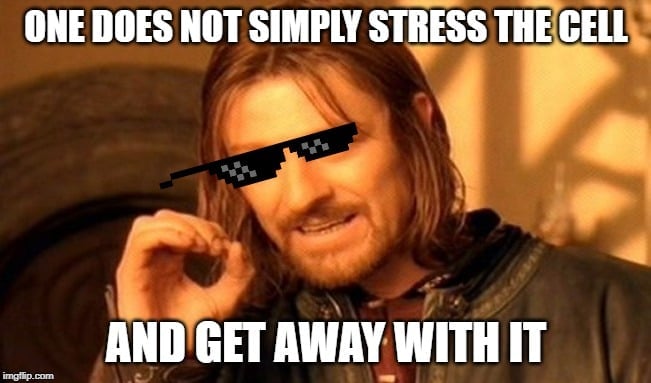 How does stress change a cell?

In order to cope with the new environment, cells change their own internal environment.

The cell has various known (and as yet unknown) mechanisms to detect stress, all of which ultimately send this information to the DNA through a signaling cascade. A signaling cascade is like passing a note to various people in class till it reaches who you want it to (like your crush). In a cell, the proteins pass on a messages to each other, ultimately being delivered to the DNA.


These cascades are elaborate and often interconnected with each other, meaning that a single stressor can make changes to many different areas of the cell. The signal from the environment activates protective regimens within the cell to defend against the stress.

How do cells protect themselves against cellular stress?

A cell has many tricks up its sleeve (encoded in the DNA) that allow it to protect itself against stress. This defensive line of cellular fire fighters try to help the cell regain balance (homeostasis), while also mitigating the damage that the stress can cause.

These defenders against the dangers of the external environment are diverse, each protecting the cell in their own unique way.

The first and most frequently discussed defenders are Heat Shock Proteins or Hsp.

One of the biggest impacts of cellular stress is protein misfolding or denaturation. Denaturation is when the shape of a protein changes because the bonds maintaining that shape begin to break, or because certain chemical groups have been added to the protein. The function of a protein depends on it maintaining its specific shape.

Denatured proteins have the capacity to become cytotoxic (toxic to the cell) by clumping together and killing the cell.

When the cell encounters some source of stress, it generates more Hsps (upregulates). If this stress—heat stress, for example—denatures the proteins, the Hsps will come to the rescue.

The Hsps bind to these denatured proteins, refolding them back to their functional shape. Hsps are present in all organisms, microscopic or macroscopic, although the name of the specific proteins are different. Some of the most important Hsps are Hsp70, Hsp40, and Hsp90.


Another tactic that cells use is to simply destroy what cannot be saved.

Proteins that are too denatured to be saved are sent to be disassembled and destroyed. This clean-up mechanism (performed by a protein complex called the proteosome) prevents the unsalvagable proteins from wreaking havoc inside the cell. The proteins destined for the proteosome shredder are tagged and then they make their way to be shredded.

The lysosome is an organelle within the cell where cells digest their own waste. Lysosomes are important when immune cells kill bacteria and viruses. A large hoard of proteins is digested in the lysosome.

If all else fails, and the cell just cannot protect itself, it will initiate the self-destruct function.

Apoptosis or programmed cell death is a mechanism by which a cell sacrifices itself. When the cell has incurred too much damage (or has simply become too old), certain mechanisms are activated that dismantle the cell from within. 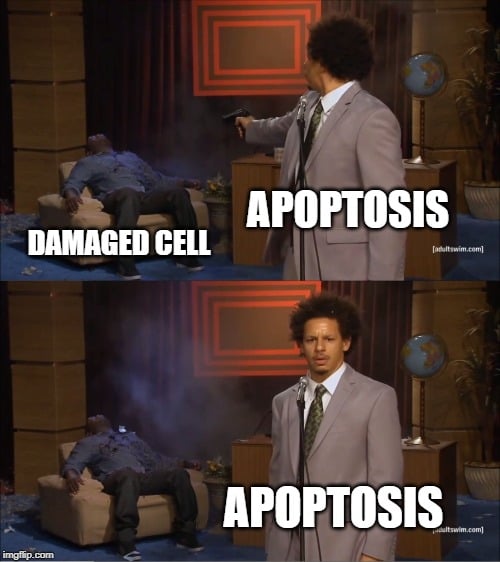 Apoptosis calling the shots on a cell’s fate.

Why should you care about cellular stress?

There are countless more ways in which cells protect themselves from the different environmental stressors they come across.

This article only highlighted those mechanisms that have been elucidated through years of research. Scientists know that these mechanisms play a role in cellular stress management, and they will surely remain popular subjects of research.

Cellular stress and the inability of cells to deal with it is a major cause (primary or secondary) of many diseases.

Neurodegenerative diseases like dementia and Alzheimer’s are shown to be driven by high oxidative stress that affects normal neuronal function. Cancer happens when a cell’s inbuilt protective features malfunction (over time and due to many stressors).

These features are also highly conserved across species, meaning that the genes controlling these proteins and processes have changed very little over the course of evolution. This makes sense, as these processes are essential for survival, regardless of your species. Without these tireless defenders taking on everyday assaults, such as walking in the sun and not getting enough sleep, your life would be far less pleasant, and far more brief!