Hot water extinguishes fire faster, as the heat that must be absorbed to convert hot water to steam is much greater than the heat absorbed in bringing cold water up to 100°c.

“A fire seems to have started outside!! Quick, get me some water!” Charlie shouted.

In the “heat” of the moment, it’s easy to forget, but the temperature of the water does actually matter, as it affects the water’s efficiency in extinguishing a fire.

It’s a common misconception that spraying cold water on a fire will help put it out faster, but in reality, hot water is more effective in putting out a fire than cold water or water that is at room temperature. This is credited to a variety of factors, including the high heat capacity and the high latent heat of vaporization of water. Before we get into those details, let’s cover the basics: how does water help put out a fire in the first place? Hot water or cold water to extinguish a fire?

How does water put out fire?

Fire is a three-headed devil. Cut any one of them off and you will effectively kill it. These three heads are heat, fuel, and an oxidizing agent, although, a fourth head (chain reaction) is sometimes important to consider. The application of heat to any fuel in the presence of an oxidizing agent is what starts a fire. Once a fire has commenced, it automatically burns through all the available fuel; this automated and perpetual propagation of reactions is called a chain reaction. 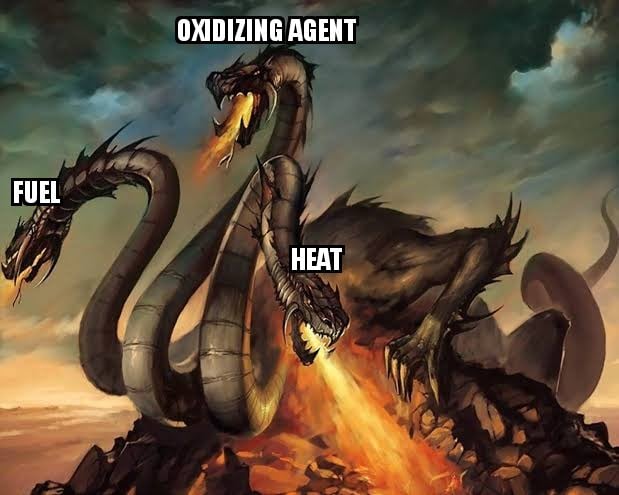 Removing any of the aforementioned elements of a fire is fairly difficult. Starting with the first element, removing heat requires the employment of any material that absorbs heat, which will reduce the heat available to sustain the chain reaction. Next, fuel is anything that catches on fire.

However, removing fuel doesn’t instantly extinguish a fire, but rather restricts its further dispersal. Lastly, fire needs oxygen to breathe and continue its onslaught. Without a steady supply of oxygen, a fire starts to simmer down and ultimately dies.

Water extinguishes a fire by simultaneously severing two of its heads—heat and the oxidizing agent. Upon being sprayed, water first has a cooling effect on the fire. This cooling occurs due to the heat being absorbed by liquid water to transform itself into vapor (more on this later). Also, once liquid water is converted into vapor, it establishes a barrier between the burning fuel and atmospheric oxygen.

Why is hot water better than cold water?

Water is more effective than most other liquids at putting out fires due to its chemical properties, specifically its heat capacity and latent heat of vaporization. Heat capacity is the amount of heat required to raise the temperature by one Kelvin. Water has one of the highest specific heats among other naturally occurring substances.

You would require about 4.182 KJ/kg to raise the temperature of water by 1 Kelvin. Thus, a large amount of heat is absorbed by the water when it is sprayed on fire in order to raise its own temperature.

However, the heat absorbed to raise the temperature only provides part of the cooling effect.

The heat absorbed when liquid water changes into steam is much greater than 4.182 KJ/kg and further boosts the cooling effect. Once the boiling point of water (100°c) is achieved, the heat being absorbed is no longer utilized to raise the temperature, but rather to break the bonds between the water molecules. A large amount of heat is absorbed in converting liquid water to water vapor. (Photo Credit : Fouad A. Saad/Shutterstock)

When cold water is used, time is first spent in bringing the cold water up to the boiling point. Since the temperature of hot water is already near its boiling point, less time is required to reach 100°c. Thus, the high latent heat of vaporization of water comes into play sooner for hot water than it does for cold water, so heat is absorbed at a faster rate by hot water. Also, a quicker conversion to steam means a faster establishment of a barrier between the burning fuel and oxygen.

This combination of higher heat absorption when converting to steam and a faster barrier establishment helps hot water extinguish a fire more rapidly than cold water.

Hot water may scientifically seem more efficient in putting out a fire, but you’re probably wondering how much more efficient is hot water than cold or regular water. Honestly, the difference might be too small to even consider, particularly in the practical moment of needing to put out a fire. However, the next time you see an accidental fire and have hot water on hand, you’ll be able to confidently toss the near-boiling water on the flames.

However, you must be careful when using water to put out electrical and chemical fires. Water is a good conductor of electricity and can help spread such fires even further, rather than extinguishing them. Chemical fires, on the other hand, may contain chemicals that are less dense than steam and will thus float over the barrier and continue to extract oxygen from the environment.

How much do you know about the suitability of water for dousing fire?