When it’s freezing cold outside and you throw a cup of boiling water into the air, the water droplets rapidly evaporate into vapor that immediately condenses into a cloud. The cloud looks like snow, but it’s actually just water vapor.

It’s freezing cold outside and you decide to take a cup of boiling water outside and throw it into the air. Instead of falling to the ground and searing a hole in the already-fallen snow… Boom! It magically turns into snow!

Have you ever seen this happen before? In recent years, this has become all the rage to videotape, particularly in regions that aren’t used to such extreme temperatures.

These videos go viral every winter when some bored soul sitting in the confines of a heated room gets the crazy idea of recording this bizarre experiment and sharing it on social media.

However, have you every wondered why water at its boiling temperature can miraculously convert into snow in the blink of an eye?

Exactly… I had the same reaction. It’s pretty hard to believe.

But wait a minute! Can you do this anytime and anywhere when it’s freezing cold outside?

Not exactly. This transformation doesn’t really work that way. There are certain conditions that need to be fulfilled in order to create snow from boiling water.

Two conditions to be precise, and if they’re both present, then you should be able to create snow from boiling water: 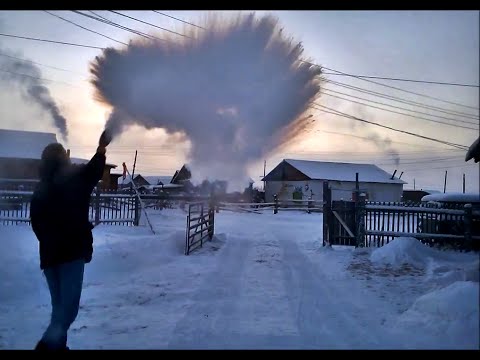 When boiled water is thrown into air at such a cold temperature, it instantly turns into snow and simply drifts away.

However, be careful when trying out this cool-looking phenomenon, and don’t throw the hot water straight up or onto other people. The above phenomenon would not work if the water temperature is less than 100°C (212° F) or if the outside temperature is not cold enough (outside the range of -20° to -30°C, or below 0°F). In other words, if these conditions are not satisfied, you may end up hurting yourself or others with the boiling water.

This is such an unbelievable phenomenon, however, that people go outside in these freezing temperatures, stand in the snow, and throw water to make even more snow! What can I say! Humans can be very difficult creatures to understand.

See the video (below) of a woman having quite a good time at a temperature of -30°C.

Why Does Boiling Water Turn Into Snow?

Boiling water is closer to the point of evaporation than cold water. Cold air is very dense, which makes its capacity to hold water vapor molecules very low. Therefore, when hot water is thrown into extremely cold air, the smallest droplets are able to cool and evaporate in a dramatic cloud before they reach the ground.

In reality, this water isn’t actually converting into snow; rather, the water rapidly evaporates into vapor that immediately condenses into a cloud. Whatever it is, it still looks like snow, so it’s pretty cool!

As it turns out, sub-zero temperatures aren’t that bad. You can’t make “real” snow (although you probably already have plenty to play with in the winter), but making huge clouds of vapor from hot water does look pretty cool.

Just remember to be careful! Don’t burn yourself or anyone else while trying to make the next viral video!