Greases have been in domestic and industrial use for centuries. Widely used in cooking, these oils come into regular contact with heat and fire. Generally, this poses no danger, but if the conditions are suitable, then grease may catch fire, which is a very serious hazard.

This is exacerbated by the fact that the conventional wisdom of pouring water to douse a fire doesn’t work in this case! A grease fire is a TYPE-B fire and cannot be controlled with water. (Photo Credit : Chii Chobits/Shutterstock)

But why does water not effectively extinguish a grease fire? Perhaps more importantly, why does grease catch fire in the first place? To answer these questions, let’s try to understand the underlying chemistry of grease and fire control.

Grease is a semi-solid mixture of an oil lubricant and a thickener. The oil lubricant is a liquid, which is responsible for reducing friction with the contact surface. The thickener gives a semi-solid, squishy consistency, such that the oil is retained in a structure and does not spread out. The boiling point (Tb) is defined as the temperature at which the oil transitions from a liquid phase to a vapor phase. At the boiling temperature, the molecules of the liquid oil gain sufficient thermal energy to overcome the intermolecular attraction within the liquid bulk and escape into the atmosphere. There is no chemical change of the molecules.

The smoke point (Tsm) is the temperature at which the oil starts to give off visible smoke. The smoke point is generally just above Tb. Physically, smoke is a suspension of minute solids and gases (suspended particulate matter) in the air. At the smoke point, the oil molecules undergo a chemical change (oxidation) to form free fatty acids. Smoking of oils is a visual indication that the temperature has risen too high. (Photo Credit : nikkytok/Shutterstock)

The Flash Point and The Fire Point

The Flash Point (Tfl) is the temperature at which the vapors can be ignited (i.e., catch fire and cause an explosion) in the presence of an external ignition source. Since the vapors are suspended in the air, the ignition of one vapor molecule sets off a chain reaction where the nearby molecules also get ignited. This causes an explosion. The fire may not sustain itself, however, and will likely die out after the explosion.

The Fire Point (Tfi) is the temperature at which a continuous fire can be sustained.

The temperatures in increasing order are: Tb < Tsm < Tfl < Tfi.

The Mechanism of a Grease Fire

The oil is what causes a grease fire to be so dangerous. The process by which a fire starts is called combustion. Three components contribute to a fire: Fuel, Oxygen and Heat. Here, fuel is the oil in the grease, heat is provided by the stove, and oxygen is present in the atmosphere. When the temperature crosses the minimum threshold (activation energy), the oxygen combines with the fuel (fuel becomes oxidized) in a redox reaction, which gives off a lot of heat and light (i.e., a fire). 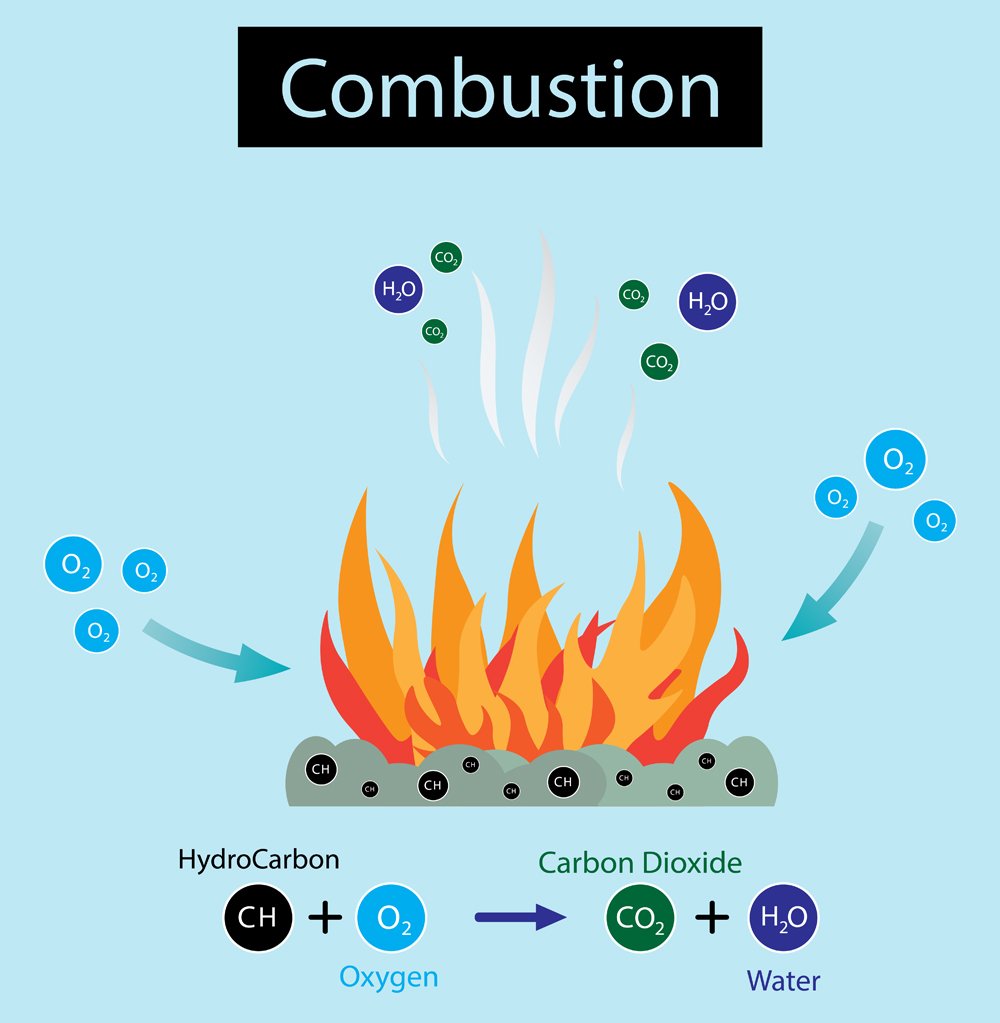 Water and oil do not mix (immiscible liquids) because water is polar and grease oil is non-polar. They do not form intermolecular bonds and instead repel each other. There is a separation of oil and water layers. The denser liquid falls to the bottom and the less dense liquid floats over it.

Water is denser than oil, so when water is poured onto burning oil, some of it tends to float to the bottom and the rest tends to sink. Since the temperature around the water droplets is high, they get vaporized (a change in phase from liquid to gas). This results in a substantial volume expansion of water droplets, pushing the oil mass away and spreading the fire over a larger area. The droplets that do not get vaporized will sink to the bottom, without helping to extinguish the fire.


When grease fires occur, it is advisable to turn off the heat source as soon as possible and cover the utensil, area, or pot with a lid. This cuts off the oxygen supply that is required to continue the redox reaction necessary for fire. As soon as all the oxygen is exhausted after it has combined with the oil, the fire will stop.

But most importantly, call the fire department immediately!