Rotation in the opposite direction of what is expected or most common is called retrograde. The planets Venus and Uranus spin clockwise, which is considered retrograde motion.

If you are into astronomy or astronomical observations, then you probably know that the path planets take around the sun (in our solar system) is usually elliptical. However, astronomers have also observed that some planets do not move forwards, but instead seem to be moving backwards. Are these planets actually moving backwards in their orbit or is it some sort of optical illusion or aberration?

First, let’s take a look at the difference between Retrograde and Ordinary Motion. 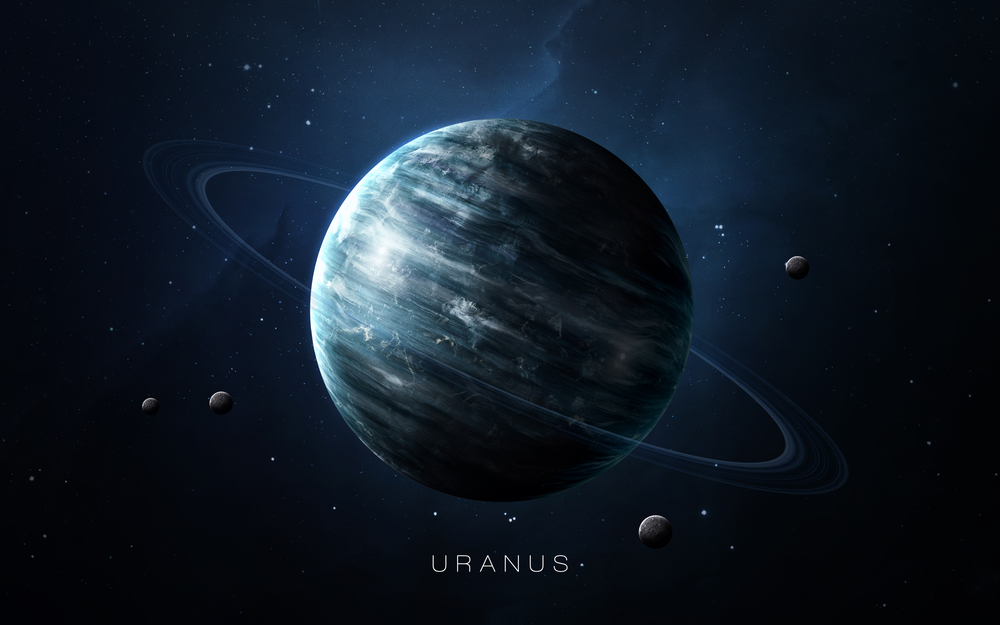 Some comets and small asteroids orbit the Sun in retrograde orbits. These are the exception, rather than the rule, for the motion of celestial objects. The apparent motion of most celestial objects is from east to west, but it is possible to observe a body moving west to east, such as an artificial satellite or space shuttle that orbiting eastward.

This orbit might also be considered retrograde motion in this sense. However, since satellites you see going eastward would be seen orbiting Earth counterclockwise if seen from the Pole Star, they’re considered direct satellites. There are also artificial satellites that go clockwise, as seen from the Pole Star; these are called retrograde satellites and can be seen in the sky moving westward. Retrograde motion should not be confused with retrogradation. The latter term is used in reference to the motion of the outer planets (e.g., Mars, Jupiter, Saturn). Although these planets appear to move from east to west on a nightly basis in relation to the spin of the Earth, they are typically drifting slowly eastward with respect to the background of the stars, which can be observed by noting the positions of these planets several nights in a row. 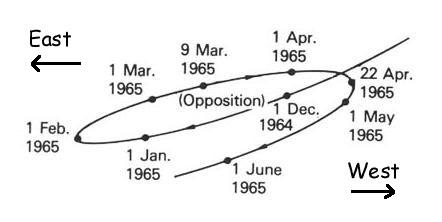 The non-retrograde motion of other planets are said to have direct motion. However, since Earth completes its orbit in a shorter period of time than these outer planets, we occasionally overtake an outer planet, like a race car on a multi-lane race track! When this occurs, the planet we’re passing will appear to stop its eastward drift, and it will begin to drift back towards the west. This is retrogradation, since the planet appears to be moving opposite to the typical direction for planets. Finally, as Earth swings past the planet in its orbit, it appears to resume its normal west-to-east drift on successive nights. To establish a deeper understanding of this phenomenon, let’s take a look at the retrograde motion of our closest neighbor, Mars.

Under normal circumstances, the red planet appears to move to the East (upwards in the gif below), but when it’s being overtaken by the Earth, our faster motion makes Mars appear to be going backwards (downwards in the gif below). The normal motion is called direct motion, while the backwards motion is called retrograde motion. Unfortunately, the positions of the planets in the left part of the diagram are not clearly shown, making this diagram less useful than it could be.

The above gif shows that Mars creates a loop (mapped carefully in the year 2003), because its orbit is somewhat tilted and moves relatively fast. In each “loop”, the planet appears to move to the east (from right to left) prior to it being in the opposite direction from the Sun, at which point it slows down and reverses its path when near opposition (the middle of the loop), and then finally resumes its eastward motion after passing opposition.

As the planets stop moving east and start moving west, their motion slows and may even appear to stop if they have a more-or-less straight line of motion. As a result, the ends of the retrograde motion period are referred to as “stationary” points. In the image, it can be seen that the dots are relatively close together near the stationary points, and further apart elsewhere.

In the illustration above, Mars’ motion slows as it approaches a stationary point, speeds up and then slows down again as it goes through retrograde motion, then speeds up after passing the second stationary point. However, unlike the retrograde loop observed in 2003, the 2005 opposition produced an S-shaped motion relative to the stars. Which of the two types of retrograde motion occur depends on where the planet is, relative to the nodes of its orbit (the directions as seen from the Sun, where the plane of the planet’s orbit crosses the plane of our orbit).

In conclusion, we can state that retrograde motion is more of an optical perception than an actual reversal in the direction of a planet as it travels in its orbit.