Due to a wobble in Earth’s rotational axis, the zodiac signs have drifted from the position they were in some two thousand years ago, so the sign you consider as “yours” is probably wrong!

The zodiac has undergone periods of reinvention as it has passed between different cultures, because each culture has picked out shapes and patterns in the sky that are unique to their history. Rivaling each other in size and forms, the zodiacal signs have been viewed as totems by which to identify oneself, and are thought to represent certain behavioral characteristics and personality traits.

While many researchers believe that the impetus for development of the zodiac was derived from Babylonia, archaeological discoveries (from the Lascaux cave in France) indicate that their origins can be traced back to the Paleolithic Age.

Originally assigned about three years ago, the zodiac signs are based on the position of the sun relative to the constellations over the course of a year.

However, since the inception of the zodiac system, a slow change in the orientation of Earth’s rotational axis has altered our view of the Zodiac. The stars have gradually moved and shifted counterclockwise, which has resulted in the constellations being misaligned with their corresponding zodiac signs.

This means that the zodiacal sign you consider as “yours” is probably incorrect!

The Ecliptic: The Sun’s Apparent Motion

The Zodiac Is A Belt Of Constellations Appearing On Either Side Of The Ecliptic.

The ecliptic is one of the most important tools in an astronomer’s arsenal, but many readers may be completely unaware that it exists. Imagine a line connecting the Earth to the Sun in a manner such that the Earth and Sun are at the two ends of the line. As the Earth revolves around the sun, the sun also seems to be moving against the backdrop of stars.

However, this is just an illusion, as the sun isn’t actually moving! The ecliptic is just an imaginary line that traces out this annual path of the Sun in the sky. Traveling along the ecliptic are also the moon and planets, while straddling it are the constellations that form the zodiac. 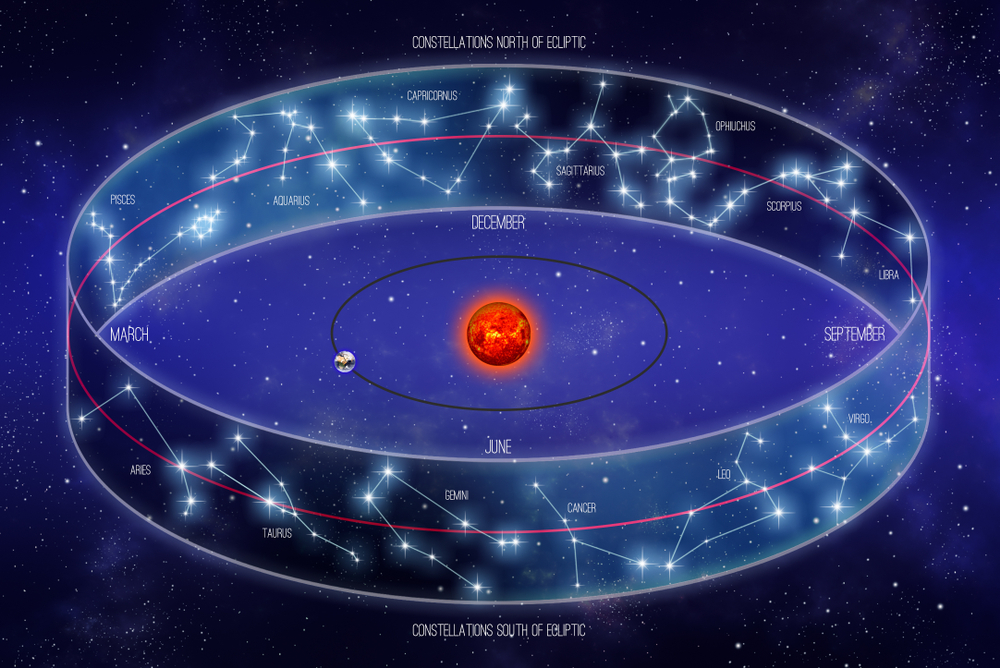 The band of the zodiac appears on either side of the ecliptic—the apparent circular path that the sun traces in the sky. (Photo Credit : MattLphotography/Shutterstock)

Every year, the Sun moves around this band of constellations, making a complete circuit. A different constellation is visited every month, which is why the annual path of the Sun is known to be divided into 12 signs of the zodiac, where each sign occupies a 30-degree sector of the sky.

However, the constellations are not distributed evenly along this belt.

In reality, a wide variation can be observed in the sizes of the astronomical constellations. Owing to this variation in size, and Earth’s velocity around the sun, which changes with its distance from the Sun (Kepler’s law; Earth moves faster when closer to the Sun, and slower when farther away), the sun traverses the area covered by different constellation on the celestial sphere in different time periods.

The IAU in Délimitation scientifique des constellations (Delporte, 1930) recognizes 88 constellations today, over half of which can be attributed to ancient Greek, who consolidated the learnings of the primordial civilizations of Babylon, Egypt and Assyria.

While a popularly held view is that there are 12 constellations of the zodiac, there are actually 13 constellations, namely, Capricornus, Aquarius, Pisces, Aries, Taurus, Gemini, Cancer, Leo, Virgo, Libra, Scorpius, Sagittarius, and Ophiuchus. The rather large constellation of Ophiuchus was left out by the Babylonians, even though it has always been a part of the Sun’s path in the sky. 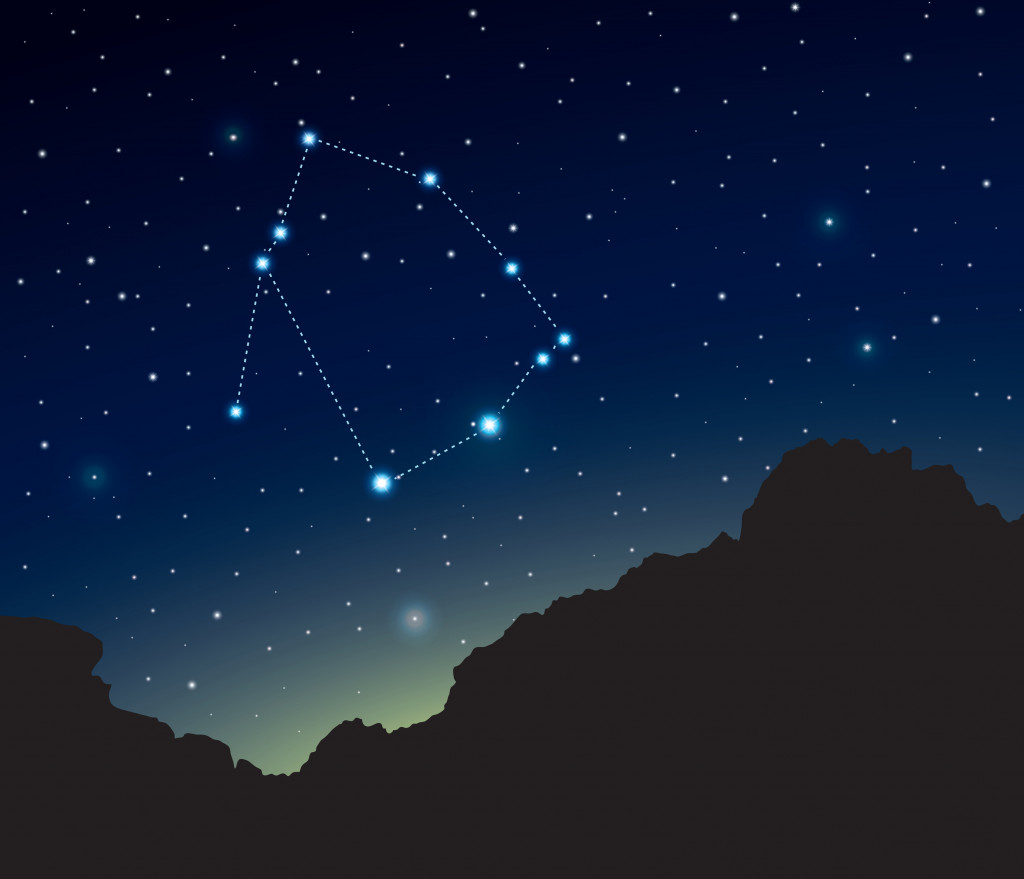 Ophiuchus, commonly represented as a man grasping a serpent, was amongst  the 48 constellations listed by Ptolemy. The sun spends more time passing through Ophiuchus than Scorpius. (Photo Credit : Sarah2/Shutterstock)

With Earth as its center, the celestial sphere is a gigantic, fictitious sphere of infinite radius used to describe the positions of heavenly objects. Every object within or on the celestial sphere has set coordinates, though distant objects that are barely moving (like stars) are treated as fixed objects.

Precession: What Causes The Shift

The Earth rotates on its spin axis—an imaginary line passing through the North and South poles. This axis happens to undergo precession, which is a motion by which the axis slowly changes the direction in which it is pointing.

As a result, the alignment of the poles with the stars is altered, and a change in the celestial coordinates is observed.

Like a toy top that has been set spinning, the axis of the earth maintains a fixed direction until nudged, when it then changes the direction of this axis.

The Greek astronomer Hipparchus first proposed this gradual westward shift around 130 B.C., while attempting to accurately estimate the length of a year. During an equinox, which occur twice a year, the sun is at the intersection of the ecliptic and celestial equator.

While comparing ancient observations with his own, Hipparchus observed that in the preceding 169 years, the sun’s position had changed, as the intersections had moved by a few degrees. Hipparchus’ work was continued by Ptolemy in Tetrabiblos.

Now, one may wonder why this happens. A spinning Earth bulges at the equator, owing to which the shape of the Earth isn’t a perfectly round (or uniform sphere), but is instead an oblate spheroid (a slightly flattened sphere). Basically, the Earth is wider at the equator than it is at the poles.  The Earth’s equatorial radius (6378.1 km) differs from its polar radius (6356.8 km). 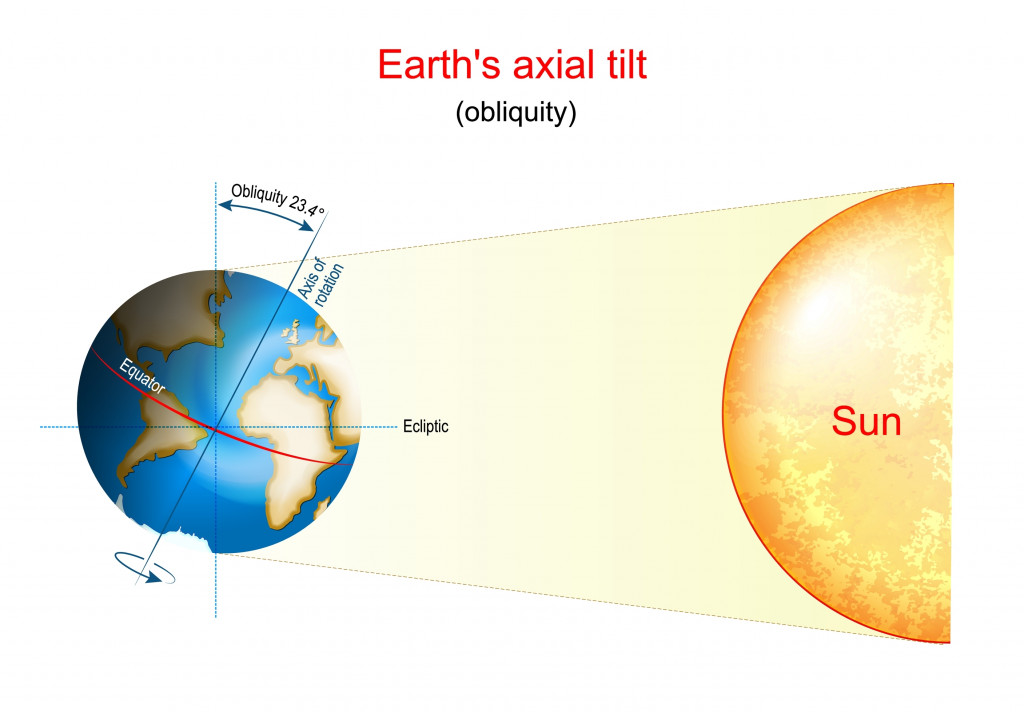 Since the Earth’s rotational axis is tilted, the equatorial bulge is also tilted relative to the direction of forces from the sun. Due to this tilt, the gravitational force experienced by Earth at the two poles differs. The gravitational force experienced by the different parts of the equatorial bulge of the Earth is also slightly varied; it is stronger on the side near to the source of external gravity, and weaker on the side farther from the source of external gravity.

The effect of this gravitational action of the sun on the different sides of the bulge manifests as the Earth being pulled in the direction normal to the ecliptic, so as to decrease the tilt angle, as if an attempt is being made to straighten up the leaning Earth.

However, the torque (the force trying to get Earth to stop leaning) does not affect the axial tilt as the Earth is rotating; instead, it changes the angular momentum perpendicular to the spin axis, i.e., it causes the Earth’s spin axis to move in a circle in the sky, resulting in the Earth wobbling, much like a spinning top.

It would be close to impossible to study precession using one’s earthbound observations, given the extremely slow nature of the phenomenon; the period of this movement is 25,776 years, which is a rather long stretch of time when the short length of a human life is considered.

Precession has caused the intersection point between the celestial equator and the ecliptic to move nearly one-tenth of the way around the band. This means that the signs have now moved forward by a month; what was previously the time frame for Aries would now be the period for Pisces!

Also Read: Are The Constellations Always Going To Look The Same As They Look Today?

The corrected dates for the zodiacal constellations are as follows: 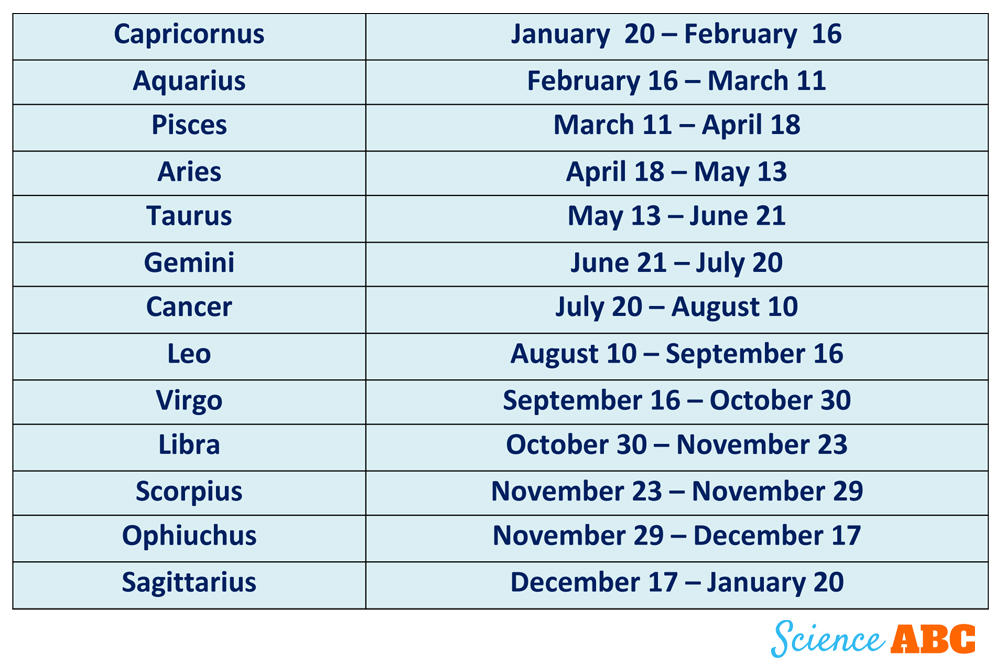