Whether you consider yourself a mountaineer, or simply love going out in nature to marvel at scenic vistas, then you’ve heard the name Mt. Everest. Famed for being the tallest mountain on Earth, Mt. Everest sits just over 29,000 feet in height, meaning that it is roughly 8.8km tall! Towering majestically above the Himalayas, it is hard to imagine another mountain overshadowing it, but our cosmic neighbor, Mars, boasts a volcanic mountain that makes Mt. Everest look like a molehill!

Yes, Mars is not only the newest obsession for astronomers and explorers on Earth, but it is also home to the largest mountain in the solar system—Olympus Mons!

What is Olympus Mons? For reference, that is about three times taller than Mount Everest, and that isn’t even the most impressive part! Considering that Olympus Mons is a shield volcano, its lava tends to flow slowly, forming a slow, gradual ascent to the volcanic center. This has also made Olympus Mons a massive size—approximately 375 miles wide! 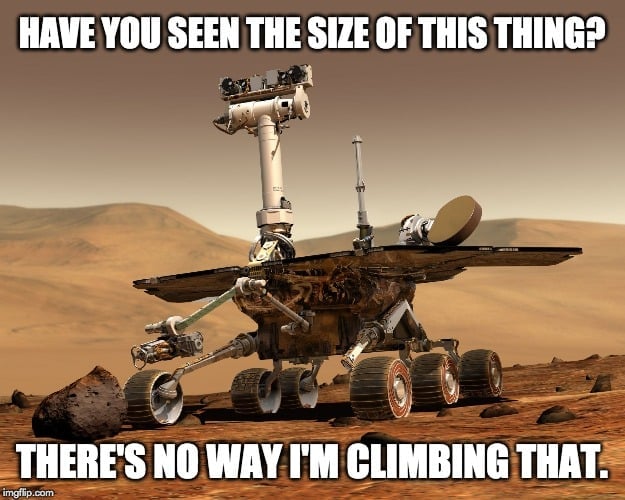 Surrounding this incredible peak is a drop-off rim, or scarp, which plunges 4 miles down to the Martian surface. In terms of volume, Olympus Mons is 100 times greater than even the largest volcanoes present on our planet. In that particular region of Mars, however, Olympus Mons is hardly alone.

Three other massive volcanoes (all larger than any found on Earth) keep it company—Pavonis Mons, Arsia Mons and Ascraeus Mons. The first time Olympus Mons was spotted from Earth was back in the 19th century… that’s how hard it is to miss!

Now, you may be asking yourself why a volcano can grow to that size on Mars when the volcanoes on our planet seem to be so much smaller. What makes Mars so special that they were able to claim the title for the four tallest mountains in the solar system?

Aside from the obvious differences between our planet and our red neighbor, such as the color of the planet and the presence of an atmosphere, a huge variation lies in plate tectonics. Whereas on Earth, the tectonic plates “float” on the magma core of the planet, there is very little (if any) plate tectonics present on Mars.

This means that the Martian surface doesn’t change very often, meaning that the location of volcanic breakthroughs in the crust remain in one position.

That being said, there is magma beneath the crust of the planet, so at those places where volcanic activity occurs, it may happen for millions—or even billions—of years! Taking the subject of this article, Olympus Mons, as an example, it is between 2 and 110 million years old, based on its scarring from impact craters.

Two million years isn’t that old in astronomical time, and considering that other volcanoes on mars have been shown to be more than two billion years old, Olympus Mons may just be getting started!

On Earth, since tectonic plates are always moving (albeit gradually), a volcano is active for a given period and then goes extinct, as the tectonic plates shift away from areas of volcanic activity. This can create volcanic chains, such as the Hawaiian islands, rather than one massive volcano, like Olympus Mons.

This is the primary reason for the size of Olympus Mons; it simply has had a lot of time to grow, and may still be active to this day! I only say primary because there are some other experts who believe the extraordinary size to be the result of Mars’ lower gravity than Earth. In other words, since Mars is smaller and has a weaker gravitational force, it may allow a volcanic mountain to grow taller than would be possible on Earth. The massive weight of Olympus Mons does push it down into the crust, yet it still is able to peek above the gigantic dust storms that often envelop sections of the Red Planet.

Why Is Olympus Mons Important?

There are a few reasons why understanding Olympus Mons—and eventually exploring it—is so important. Since the volcano is a shield volcano, rather than a stratovolcano, its eruptions have been less violent and destructive, thus preserving earlier layer beneath it. At some point in the future, when we’re exploring Mars, this preserved record of Martian eruptions could prove very informative.

Additionally, while scientists already know that there was water on Mars at one point, due to the discovery of ice beneath the surface, there may also be water sequestered away beneath Olympus Mons. In fact, if liquid water was ever captured or trapped beneath the volcanic flows of Olympus Mons, there is the possibility that life could flourish.

Some have argued that the conditions present near geothermal vents at the bottom of the ocean (a suspected origin of life on this planet) would be similar to the subterranean conditions near a Martian volcano. While this is all speculation until we have the tools and resources on Mars to make these investigations more formally, it is an exciting prospect that the largest mountain in the solar system may also harbor the secrets of extraterrestrial life!

Human beings love a good superlative, so it’s only natural that the tallest or largest “anything” in our solar system would be a source of interest and pleasure. However, in the case of Olympus Mons, we might also be able to glean some old secrets about the history of Mars.

If the volcano remains active, it could provide us with the first real-time look at the Martian landscape evolving yet again, stacking yet another layer of volcanic lava on top of its shield dome, pushing it out towards the edges where it can tumble off the edge to the mysterious Martian terrain below!