The great Himalayas were formed by the continental collision processes. They possess remarkable features of Asia’s geological history. Tragically, climate change is roasting the mountains and threatening millions of people in multiple countries.

The Himalayas are magnificent and dramatic mountains that effectively separate the Indian sub-continent from Eurasia. Majestic and larger than life, the Himalayas are the ‘kings of mountains’, but also the youngest on our planet! They are home to Earth’s tallest mountain and the 14 highest peaks in the world.

The range’s increasing peak height is evidence enough to tell that it is still undergoing frequent structural changes. The Himalayan mountain range is curvilinear and stretches over a length of 2500 km between the Indian subcontinent and the Tibetan plateau. 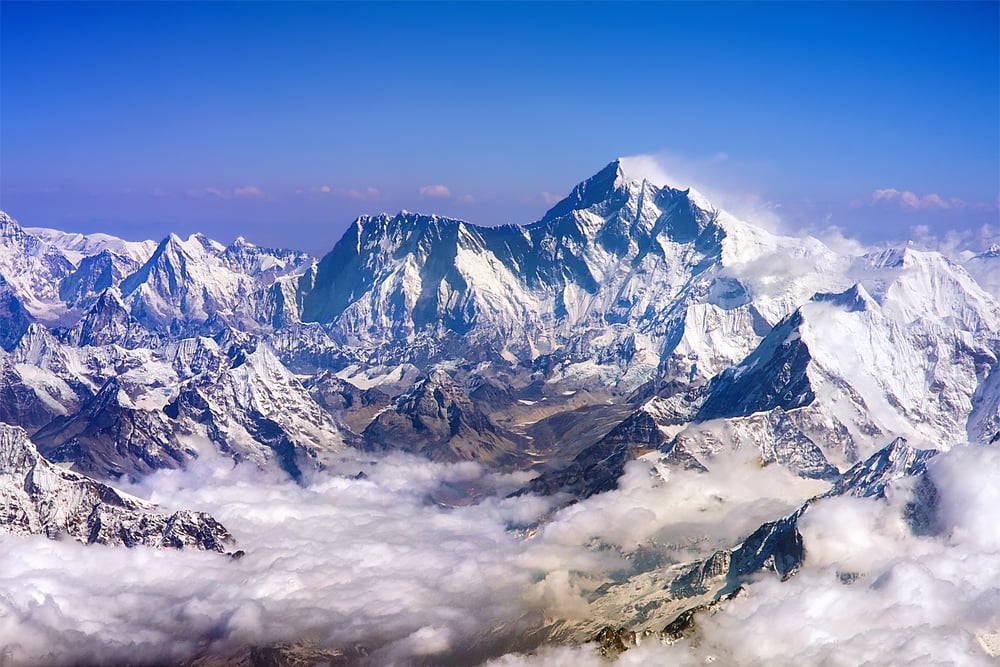 Formation Of The Himalayas

Some 300 million years ago, there existed an ancient supercontinent called ‘Gondwanaland‘. During the Mesozoic era (250-65 million years ago), it split into what we today know as Africa, Australia, South America, Antarctica, Madagascar and India. This dissolution marks the interval of time when the Atlantic, Pacific and Indian oceans opened up.

A landmass began to move eastwards after separating from the African continent around 100 million years ago. At that point, India was just a floating island in the Tethys Ocean. Over the next 85-90 million years, India broke away from Madagascar and embarked on a northeastward drift. It was moving at an average speed of 18-19 cm per year until it was accreted onto the Eurasian continent. 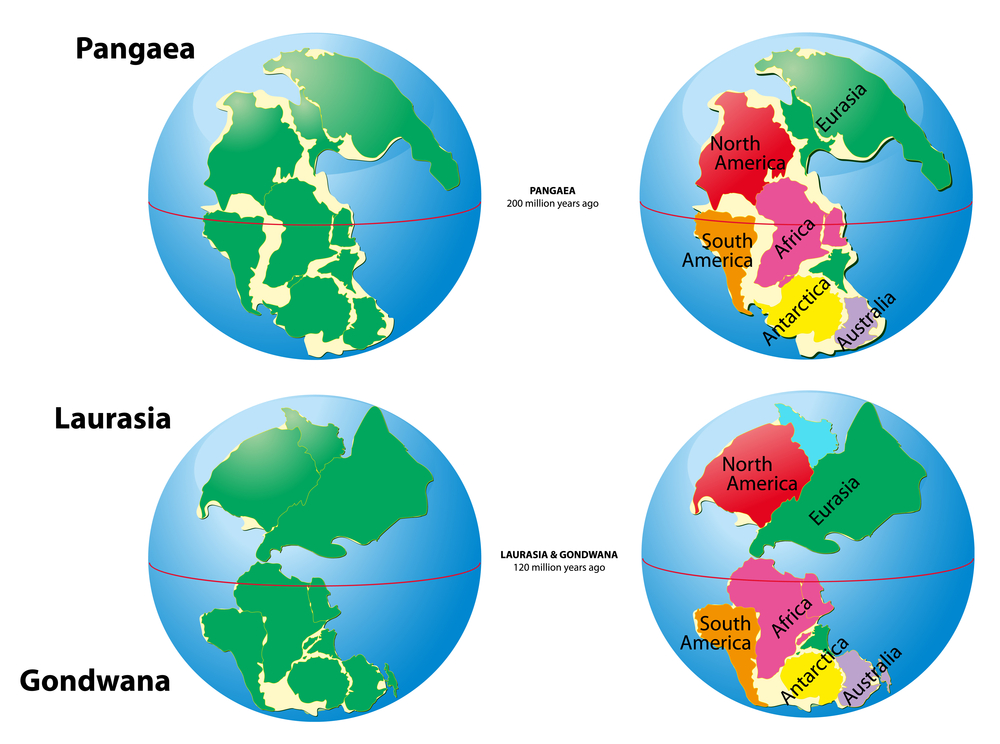 Pangaea was a huge landmass surrounded by a gigantic ocean, Panthalassa, and eventually broke into two new continents—Laurasia and Gondwanaland (Photo Credit : Designua/Shutterstock)

The Himalayas are an ideal example of how the continental collisions of tectonic plates can manipulate the planet in exceptional ways. About 50-60 million years ago, the northward advance of the Indian plate dramatically slowed down to 4-6 cm per year. This slowdown suggested that the initial continental collision between Asia and India had begun.

The continents and the oceanic crust is composed of various irregular and massive crumbled pieces of rock known as the tectonic plates. Lithospheric plates are comprised of 15-20 moving tectonic plates that collide with each other at different rates through the process of convection. The motion and separation of such plates is called tectonic shift.

The aesthenosphere is the inner mantle, a ductile layer beneath the Lithosphere. Here, weaker convection currents melt down the rocks, producing hot gases and liquids. The cooler and denser liquids/gases are displaced by the upward movement of hotter fluids. The internal heat generates gravitational forces and subsequently pushes the plates from beneath.

Also Read: Why Do Mountains Have More Biodiversity? 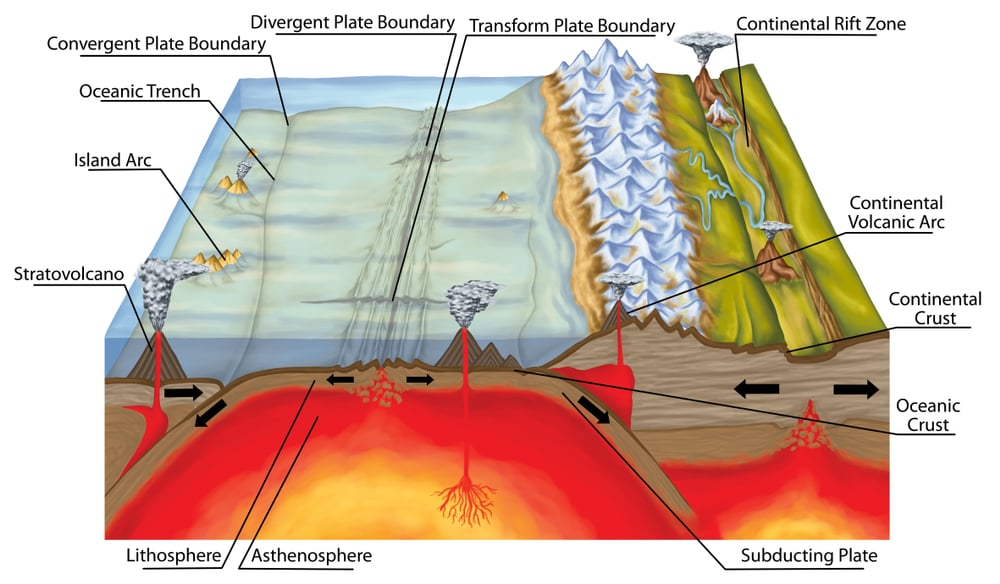 Plate tectonics: Brittle plates move apart or in opposite directions, creating a mid-ocean ridge and a rift along the central region. This led to the formation of volcanoes, mountains and oceans (Photo Credit : stihii/Shutterstock)

The Indian and the Eurasian plate both had low rock density (high buoyancy), so neither of them could be descended, despite the high potential energy within the mantle. This caused the relative uplifting of the light sedimentary rocks that formed the subcontinent of India.

Geologists believe that the Indian plate thrusted hundreds of kilometers under the Asian plate, specifically beneath the Tibetan plateau. This is attributed to the thickening of the South Tibetan crust to almost twice the normal thickness (75 km), while the crust thickness of India (Southern Himalayas) is only around 40 km!

The Indian lithosphere is therefore thick enough to support the Himalayas, as the strength of the lithosphere maintains a solid base for the crust at high levels. On the other hand, the high buoyancy of the Tibetan crust maintains its high elevation at about 4500 meters.

At high temperatures, the sediments and metamorphic cores melt, which ultimately forms magma. The thickening and solidification of magma marks the termination of volcanic activity. These tectonic cycles are as old as the Earth itself and are frequently referred to as the ‘dance of continents‘. To this day, this “dance” continues to assist in the uplifting of the Himalayan range.

The Himalayan mountain range is the youngest in terms of geologic history. The most characteristic feature is that these mountains are still active, whereas the motion of the Indian plate is constant. According to current estimations, the highest rate of lift is 1 cm per year. The Himalayas are home to the world’s highest peak, as well as some of its deadliest summits. This giant barrier stretches from the Alps to the mountains of Southeast Asia.

Nineteen major rivers originate from the Himalayas. The Brahmaputra and Indus are the largest among them. Scientists have also found layers of pink sandstone containing magnetite. This magnetic material is responsible for the flip-flopping geomagnetic field. The animal and plant fossils can also be traced back in time, formed and “frozen” by the Tethys Sea millions of years ago.

Future Geology Of The Himalayas

The Himalayan region is home to an unprecedented population that has rapidly grown in the past few decades. It is spread across eight Asian countries—India, China, Nepal, Bhutan, Afghanistan, Myanmar, Bangladesh and Pakistan. The cold temperatures in the higher mountain range have warmed up rapidly in recent years, as a result of climate change. In response to this, weather patterns have become unpredictable, permafrost has begun to melt, and glaciers are receding—inciting natural disasters.

According to recent studies, the Himalayas are at a higher risk of water crisis, as they are a popular destination for people from all over the world. The groundwater level has reached a critical stage. To cope with the ongoing water stress, well-planned and sustainable mountain-specific urban planning should be considered. Nepal has been successful in meeting this criteria by delimiting their urban areas to save water for the ecosystem. 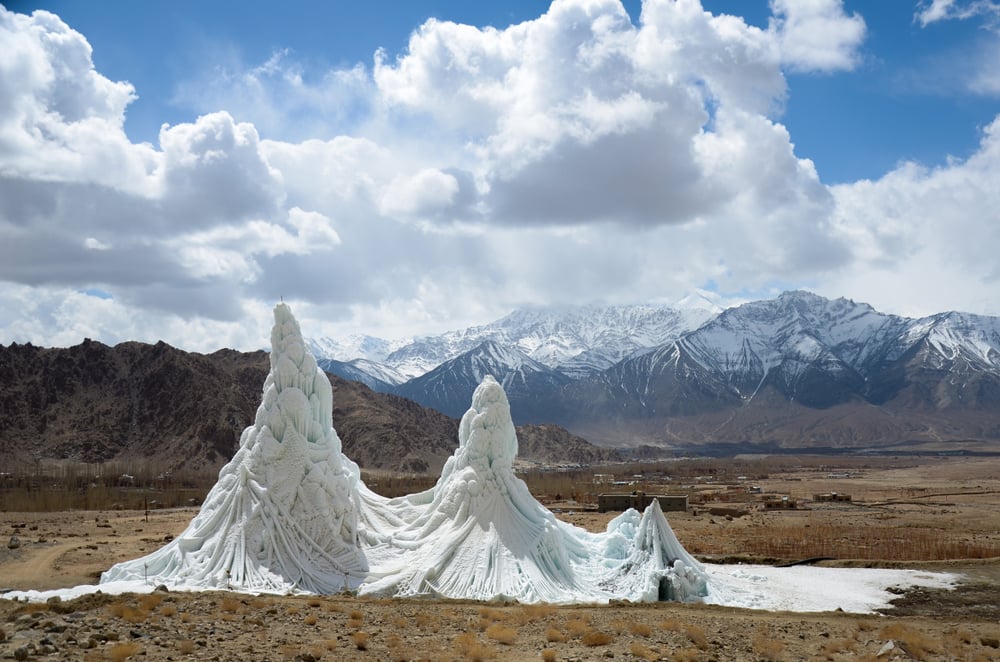 Ice stupas are artificial glaciers to deal with the problem of water scarcity in the trans-Himalayan region. The stream water is frozen in winter to form huge ice towers (Photo Credit : Naveen Macro/Shutterstock)

The Himalayan mountain range is widely known as the third pole due to the presence of an enormous amount of glacial ice. The Himalayan rivers are the critical water towers of Asia. The alpine grasslands and snow-fed glaciers power the lives of people for thousands of miles. A special priority for the massif should be safeguarding the un-rechargeable resources for the primal survival and balance of the regional ecosystem, and the overall health of our planet. 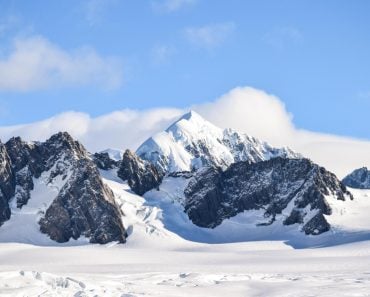