The Martian, starring Matt Damon, was quite scientifically accurate. Growing potatoes on Mars can be feasible as the basic mineral content of the soil is adequate, the shelter shown in the movie is quite realistic too. However, there were also a few inaccuracies…

The Martian, an American space thriller starring Matt Damon, was released in 2015 and garnered popular attention all over the world. The fact that it was the first ‘realistic’ Mars movie involving humans, and that NASA scientists also heaped praise upon it increased its popularity manifold.

However, as with any movie, there are always some things that look incredible on the big screen, but may still be far from the realm of reality. Dr. Robert Zubrin, an aerospace and astronautics engineer who is also the founder and president of the Mars Society and co-author of Mars Direct, commented on certain borderline-reality aspects they depicted in The Martian.

What Makes A Planet Habitable?

Given that we have an expert on the subject willing to speak up, let’s look at the things that The Martian got right, and also the ones that are simply not feasible in real life. 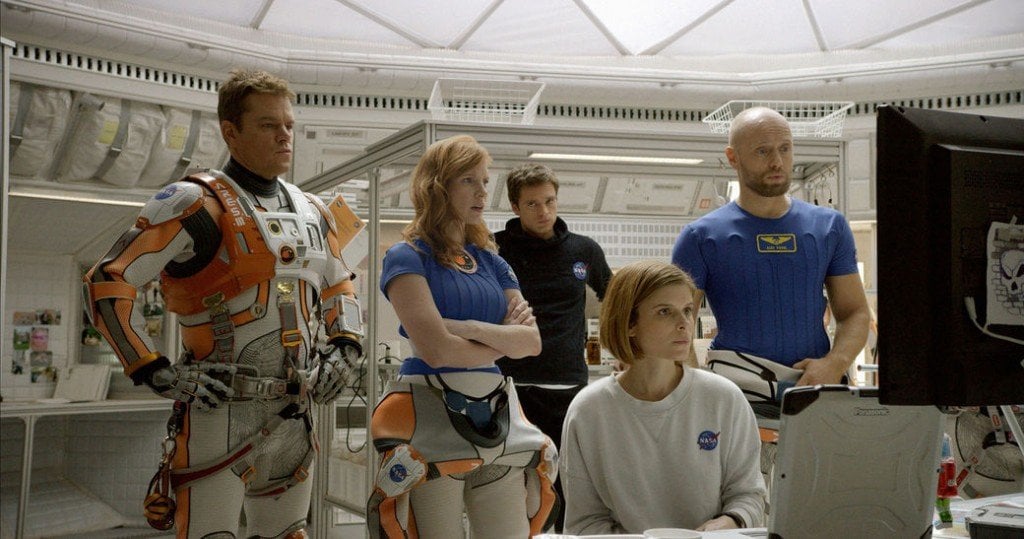 The makeshift shelter where Matt Damon lives during his stint on Mars is quite realistic. In fact, NASA is seriously considering attaching a Bigelow Aerospace module to the ISS, with a basic design that is not too different from the one they showed in the movie; it won’t be quite as fancy, but it’ll serve the same purpose! The raging storm in The Martian

The atmosphere of Mars is much thinner than that of Earth. To put it in perspective, a Mars wind blowing at 100 mph would have similar characteristics to an Earth wind blowing at 11 mph. Wind that strong can barely disrupt your gait, let alone lift you off the ground like they showed in the movie.

In fact, Andy Weir, the writer of the novel on which the movie is based, readily agrees that the storm portrayed in the movie is far too exaggerated.

Time to Travel to Mars

In this regard, they totally nailed it. Unlike many other space movies that focus more on the drama and less on the excruciatingly lengthy space travels, The Martian got it absolutely right when it revealed that using the technology available today, it would still take almost 8 months to reach Mars.

Gravity on Mars stands at almost one-third of the gravity we experience here on Earth. This means that someone weighing 90 pounds would weigh roughly 30 pounds on Mars! However, what would that mean when it comes to living on Mars? Even while wearing all your astronaut gear, you wouldn’t ‘feel’ that heavy, but in one particular scene, Mark is seen exerting himself while climbing a ladder. Climbing a ladder, or even walking around, would require much less exertion on Mars due to its lesser gravity as compared to Earth.

Mark makes uses of hydrazine from the rocket fuel and goes on to dissociate it into two constituent elements, i.e. nitrogen and hydrogen. Subsequently, he used the hydrogen and burned it with cabin oxygen to make water. This way of making water will definitely work, so the movie got that detail right too! Even though that strategy would work, for a person stranded on Mars, a much more convenient and less resource-guzzling method would be to extract water from the soil. The fact that Martian soil is about 5% water by weight at low latitudes and up to 60% water near the poles improves your chances of survival considerably, and saves you the time of playing with rocket fuel to “make” your water.

Towards the end of the movie, Mark straps himself into a rocket, which happens to be his only chance to survive, but there’s a catch – the rocket is window-less! Can you imagine being shot away into space in a rocket that doesn’t have any windows? Well, scientifically, it’s plausible. The Martian atmosphere is pretty thin, which means that you can get high enough through the atmosphere before it actually starts to become a threat to your survival. Everything depends on the thrust profile of the rocket, and as the calculations seem alright (in the movie), then yes, it may just be possible.

Admittedly, this is a little odd. In the movie, they show that the fecal matter of astronauts has been sealed individually and then stored for later study. The most efficient way to deal with that stuff would be to bag and seal it, and ultimately burn it once a day. Obviously, it will be more useful if it’s treated through a number of processes and turned into fuel (this will take extra effort, but you’ll have plenty of time if you’re stranded on Mars).

However, packing and storing everyone’s fecal matter for later study? That doesn’t sound too practical. The most ingenious section of the entire movie was probably Matt Damon’s idea to grow potatoes on Mars! Is that actually possible?

The biggest pitfall with that idea is the quality of soil (since other vital factors had already been taken care of by Mark). That being said, in terms of basic chemical and mineral content, yes, the vegetation of potatoes on Mars just might work. In fact, researchers at NASA are working with simulated Martian soil to perform experiments.

All of this aside, there are some truly breathtaking scenes in the movie that make it stand out from other space thrillers. The mere idea of a man going to Mars, and actually surviving there all by himself, is enough to give you goosebumps. It also has an important moral for any cinema-goers: no matter how difficult the circumstances may seem at first, there’s always light at the end of the tunnel.