Scientists determine dinosaur colors by analyzing melanosomes present in discovered fossils. Some dinosaurs were found with black feathers, while others had a rusty red color.

How we see dinosaurs has changed drastically since Hollywood made them into superstars. They started as brown, green, or pale white giants with rough scaly skin roaring in the rain. We now know that many dinosaurs at the end of the Cretaceous, like Anchiornis huxleyi, actually had feathers!

We have come to associate the Tyrannosaurus Rex with a dark brown hue (thanks to Jurassic Park) and Brachiosaurs with a gentle grey, but are those assumptions correct? What did dinosaurs really look like and what color were they? 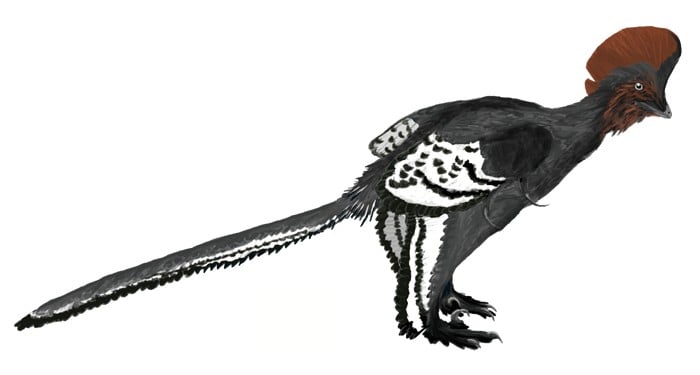 Artist’s representation of Anchiornis huxleyi, based on research revealing that it had feather colourations. (Photo Credit : Hein Nouwens/Shutterstock)

What was the first concrete evidence for dinosaur colors?

Paleoartists like Robert Nicholls must constantly keep up with new research to represent dinosaurs as accurately as they can. This is achievable when it comes to body structure and skin texture, as skeletal remains and fossilized skin imprints give enough good information to faithfully render these animals. However, one thing fossils can’t always tell us about is the color of these creatures.

For fossils to indicate color, there must be organic matter, meaning that bone isn’t enough. Until recently, paleontologists hadn’t found any pigments on any of the fossils, but as it turns out, they were looking in the wrong place!

In 2006, Jacob Vinthers, a paleontologist at the University of Bristol, peered at squid ink from a fossilized squid and was, as the scientist himself put it, riveted. Vinthers was looking at small blobs resembling melanosomes. He and his team, excited by the possibility of melanosomes surviving in fossils, analyzed a feather from the Cretaceous period, and subsequently named their published findings “The Colour of Fossil Feathers”. 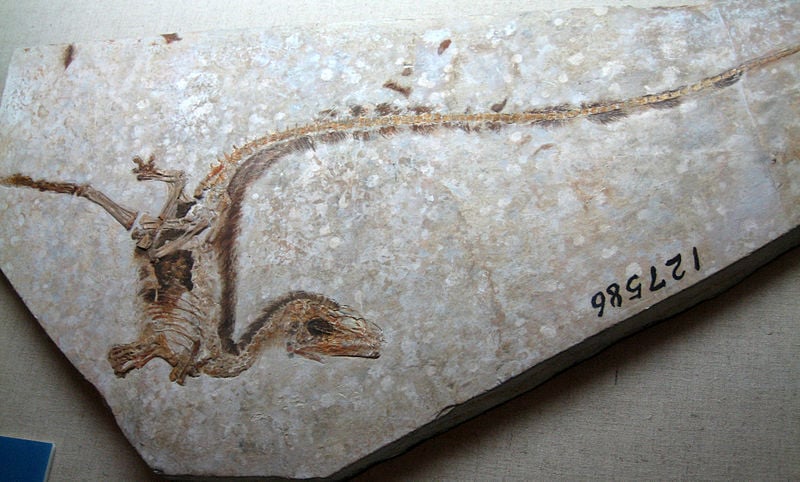 This paper opened the floodgates against the widely accepted practice of inferring dinosaur colors from modern examples. Modern reptiles, and more recently, birds, have served as references for these color assumptions. The habitats that a particular dinosaur inhabited also informed the representations, but there is only so far that such guesswork can take one in terms of accuracy.

So far, the melanosomes found in existing fossils had been thought of as biofilm keratinophilic bacteria. Melanosomes and these bacteria are of about the same size. These small blobs showed a particular patterning that wouldn’t be there if it was actually a bacterial biofilm, which would colonize indiscriminately.

Melanosomes aren’t all the same. Even in humans, and in dinosaurs as well, there are two kinds of melanin—the pigment inside these organelles.

Eumelanin provides the dark brown and black hues, whereas phaeomelanin gives the reds and oranges. The melanosomes in which these melanin varieties are stored differ in shape and size. Studying their patterning and arrangement with sophisticated technologies like scanning electron microscopes can let a scientist look into the hidden world of dinosaur colors.

Why is it difficult to detect the color of dinosaurs?

Melanosomes aren’t the only way to determine color, as other colors can come from an animal’s diet, like the pink from flamingos. These pigments don’t age particularly well with time, and would degrade, mostly ending up as sooty black carbon.

Most of this information isn’t presently available to us. Maria McNamara, a paleontologist at University College London, is working with her team on how pigments degrade when fossilized. If it becomes possible to decode these pigments, more new coloration and patterns might emerge from the depths of history!

Examples of the dinosaur colors found

In 2010, two papers came out a week apart describing the color patterns of two theropods, Anchiornis and Sinosauropteryx. Anchiornis huxleyi showed vibrant red hues in its head feathers and black-and-white patterning on its wings. Sinosauropteryx was shown to have a brilliant chestnut hue with alternating red to white stripes on its tail. Microraptor, a small winged dinosaur that lived about 120 million years ago, turned out to have iridescent black plumage akin to ravens today. (Photo Credit : Hein Nouwens/Shutterstock)

Soon enough, more dinosaurs were labeled with their actual colors. Microraptor, a small winged dinosaur that lived about 120 million years ago, turned out to have iridescent black plumage similar to ravens today.

Psittacosaurus, a large dinosaur with horns on its head, turned out to have a rust-red color with a darker back and a lighter belly. 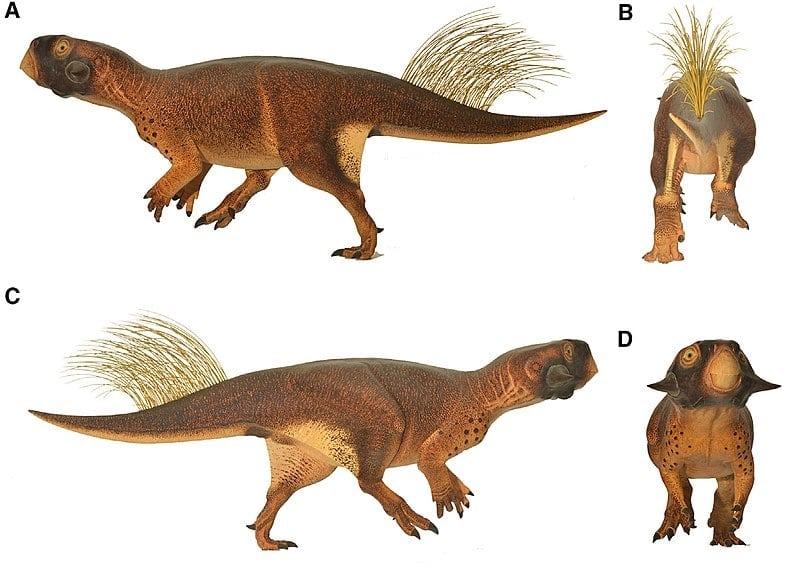 Psittacosaurus, a large dinosaur with horns on its head, turned out to have a rust-red color with a darker back and lighter belly. (Photo Credit : Hein Nouwens/Shutterstock)

Why should we care about the color of dinosaurs?

Determining if dinosaurs had feathers, or what color they were, can tell scientists a lot about what lives they might have lived. A dull colouration might mean that the dinosaur preferred not to be seen, or that color was not important for finding a mate.

If there is evidence that a dinosaur was vibrantly colored, it begs the question of why. Was it for sexual selection, or for some other purpose? Melanosomes, as we’ve seen, might have played more of a role than simply coloration. If that’s the case, it would make sense for researchers to devote additional time and effort into color research.

Looking at color also helps us look at evolutionary links with the modern successors of dinosaurs. It’s easy to think that all reptiles are related to dinosaurs, but that would be a misconception. Evidence shows that modern birds are actually closer relatives of dinosaurs than modern reptiles, something that genetic and fossil research into dinosaurs and their appearance has helped to establish.

At present, we’re far from knowing whether the Tyrannosaurus Rex was a vibrant shade of pink, as guessing skin color from fossilized remains is currently clever guesswork. This doesn’t mean there aren’t any clues, but getting a completely accurate picture of what dinosaurs looked like might only be possible with time travel. Until that becomes available, researchers and experts will keep digging into the past and trying to crack these ancient secrets!