Tyrannosaurus Rex is, without a doubt, one of the coolest out of all the dinosaurs. With its enormous size, speed, and killer power, it’s hard to deny that it was ferocious, fierce, and beautiful. Well, at least as long as beauty is measured in the strength to rip apart those around you. Anyway, the T. rex has definitely gotten its fair share of attention. From starring in the Jurassic Park movies and being the most talked-about dinosaur to entertaining everyone when their Internet doesn’t work, the T. rex is part of our shared culture.

Unfortunately, the absolute superiority of the T. rex must now be questioned. The Giganotosaurus, a massive dinosaur that existed 30 million years before the T. rex, seems to be a respectable rival. I’d hate to take the crown from the king of dinosaurs and hand it over to the Giganotosaurus, so here’s an analysis to see who was the more capable predator.

Contrary to popular belief, the T. rex is not the largest dinosaur in history. The Giganotosaurus wins this round. Weighing up to 14 tons (Around 14000 kg) for the larger ones and ranging in length from 40 to 43 feet, they defeat Sue, the largest and most complete specimen of a T. rex, which weighed about 9 tons and was about 40 feet long.

We have only found two specimens of Giganotosaurus, which also gives them the benefit of the doubt that there could be even bigger ones out there.

The size of a Giganotosaurus as compared to a human being. (Photo Credits: Durbed/ Wikimedia Commons)

While speed may not be the most important thing for dinosaurs as big as these, it is definitely something to watch out for when it comes to being a big predator.

The speed of a dinosaur is estimated by reconstructing a dinosaur’s muscle structure, its density, using the length of its limbs, the estimated centre of mass, etc. Comparing the distance between two consecutive footprints (in a sequence of preserved footprints) and the size of each footprint is another method used to estimate the movement speeds of ancient dinosaurs. However, these methods are very complicated, and scientists encounter many difficulties when trying to estimate the speed of a dinosaur.

The maximum speed of a T. rex has been controversial for many years: While some scientists estimate the maximum speed to be 16 km/hr (10mph), there have been other estimates at 72.4 km/hr (45mph) too. The Giganotosaurus, on the other hand, is said to have been able to run at a speed of 50 km/hr (31.3mph).

Given the inconsistency of the subject and without a clear winner, we must call this round a draw.

Both dinosaurs had a long body, large legs, a huge skull, and two tiny arms. T. rex had two fingers at the end of each forearm and Giganotosaurus three. Little is known about the functions of these arms.

Both dinosaurs had strong, muscular thighs, which benefited their running abilities. Both dinosaurs also had long, thick tails that helped balance the weight of their skulls (which were very big and heavy). However, evidence suggests that T. rex had a heavier tail than that of the Giganotosaurus. The Giganotosaurus had a lean, pointed tail, which probably contributed to its agility and ability to make quick, sharp turns.

Comparison between the size of a T-rex (Black) and Giganotosaurus (Orange) (Photo Credits: Dinoguy2/ Wikimedia Commons)

The anatomy of the Giganotosaurus seems to have made it a better predator.

While the speed and anatomy of the two dinosaurs seem to be comparable, the jaw power of the T. rex was probably much greater. It was able to bite 8,000 pounds with a force of 35,586 N (8000 pounds of force), a force similar to the weight of three small cars or two medium-sized cars!

The not-so-immense jaw power of the Giganotosaurus kept it from eating other dinosaurs whole, which it could have easily done otherwise, given the size of its mouth.

Another important factor for predators is the structure of their teeth. While the Giganotosaurus had almost all identical teeth, flat and wide, like blades, the T. rex had a set of teeth with a few different types. The front teeth were meant for gripping and pulling, the side teeth for tearing the flesh, and the back teeth for chewing the flesh. Fundamentally, that’s actually a lot like the structure of our teeth. We use incisors to bite into our food, canines to tear through it, and back molars to chew. Of course, they ate other dinosaurs, and while we eat dinosaurs too…. it’s not really the same… 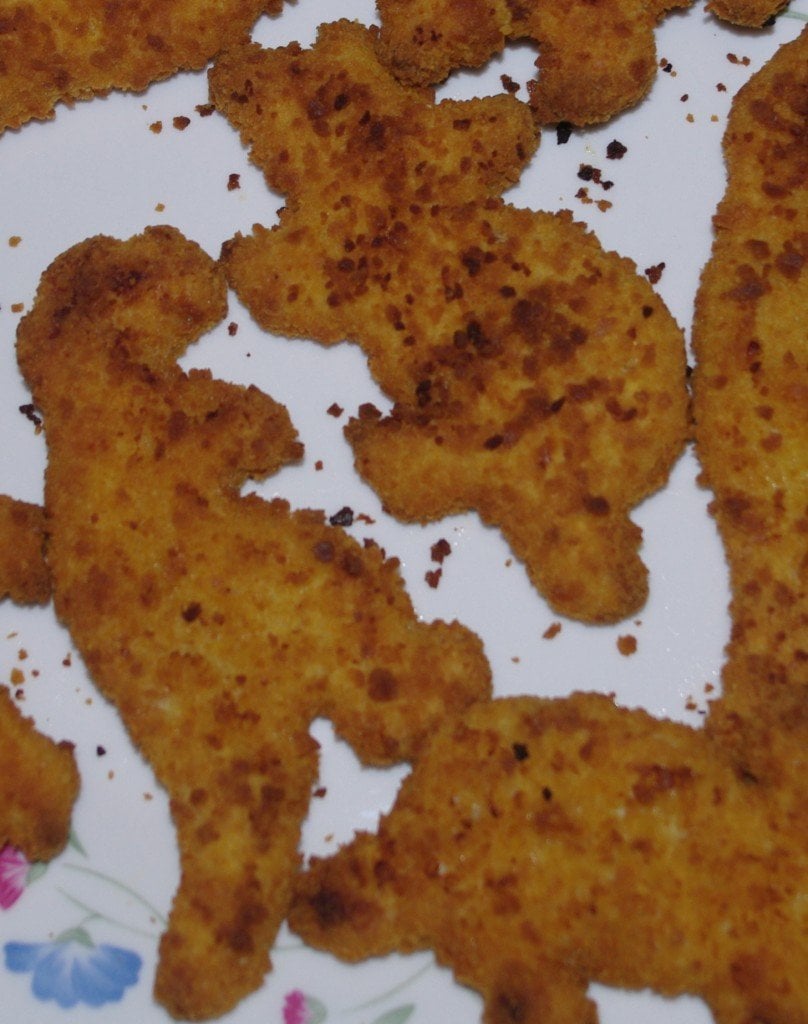 Dinosaur nuggets like these are about the size of your finger. (Photo Credits: Dirk Ingo Franke/ Wikimedia Commons)

Basically, the T. rex seems to have had a far more developed dental structure than that of the Giganotosaurus, which seems about right, seeing as it had an extra 30 million years to evolve. 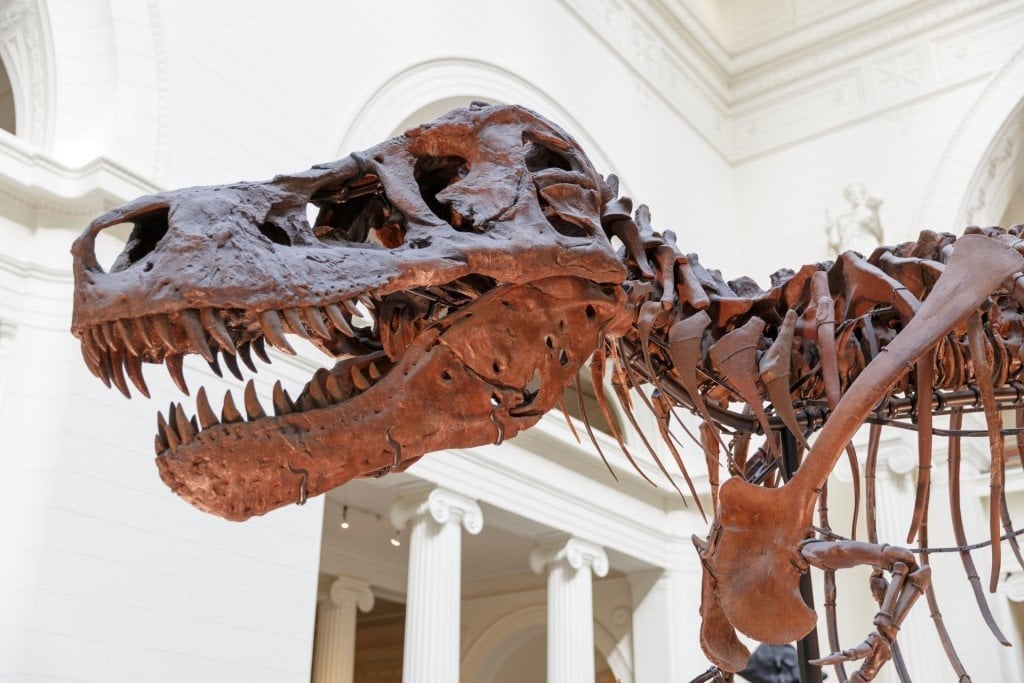 The teeth of a T-rex (Photo Credits: Imgflip)

As mentioned earlier, both of these dinosaurs had huge skulls. The Giganotosaurus had a skull measured at 5.2 feet (1.6 m), while the T. rex had a skull measured at about 5 feet (1.5 m). Although the skull of the Giganotosaurus was bigger, the Giganotosaurus’ brain was smaller and shaped like a banana. The T-rex’s brain was larger and wider. A recent study also found that ancestors of the T-rex developed advanced brain functions and sensory perceptions long before they grew to their maximum size, which is likely what led to some of their very evolved features in the first place. In fact, the T-rex was actually one of the smartest dinosaurs.

Therefore, the winner is the Tyrannosaurus Rex!

While these eligibility factors are purely based on my opinion, the T. rex does retain the title of King of the Dinosaurs. However, the Giganotosaurus sure put up a great fight.

If it weren’t for that one god-forsaken meteor, dinosaurs would probably still be here. You, me, and the rest of the 7.2 billion humans on Earth wouldn’t, but the world would still be a cooler place.

How well do you know T. rex and Giganotosaurus?