Throughout history, a number of different hypotheses have been presented for the incredible size of the dinosaurs, in comparison to the size of land animals today. One that was popularized for decades was the lack of an extinction event for such a long period of time when the dinosaurs ruled.

If you’ve been to the box office in the past few years, you probably noticed that Jurassic Park has made a major comeback with its new reboot. Capturing the imagination of an entirely new generation of fans, the awe-inspiring creatures from the prehistory of our planet are once more alive on the big screen. While the Jurassic Park movies are fictional, many of the majestic (and often terrifying) dinosaurs included in those films are inspired by real creatures that lived tens of millions of years ago. 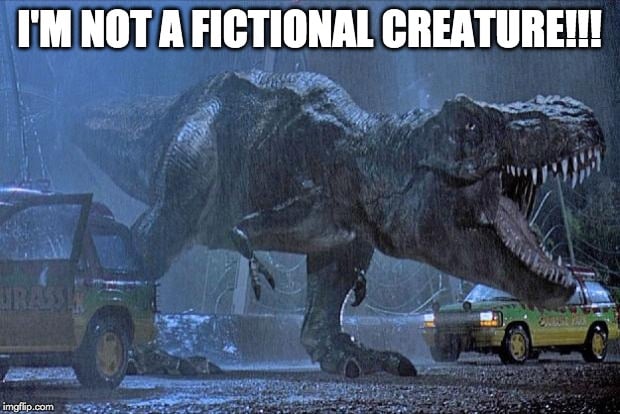 It may be difficult to imagine, but there were dinosaurs roaming the Earth that stood as tall as a six-story building, and others that weighed as much as 45 tons. Compare that to the largest land animal today, the African bush elephant, which tops out at a maximum of 13 tons, and no more than 11 feet tall. Even the longest snakes in the world only stretch to 25 feet!

Given the incredible diversity of animals we have on the planet today, why are such massive animals no longer seen on Earth?

Around 250 million years ago, the Mesozoic Era began, lasting for nearly 200 million years through the Triassic and Jurassic Periods, until the devastating end of the Cretaceous Period when a meteor slammed into Earth 65 million years ago. All the continents as we know them were combined in a supercontinent, called Pangea, so plants and animals were somewhat uniformly spread across the landmasses, without oceans to prevent their movement. 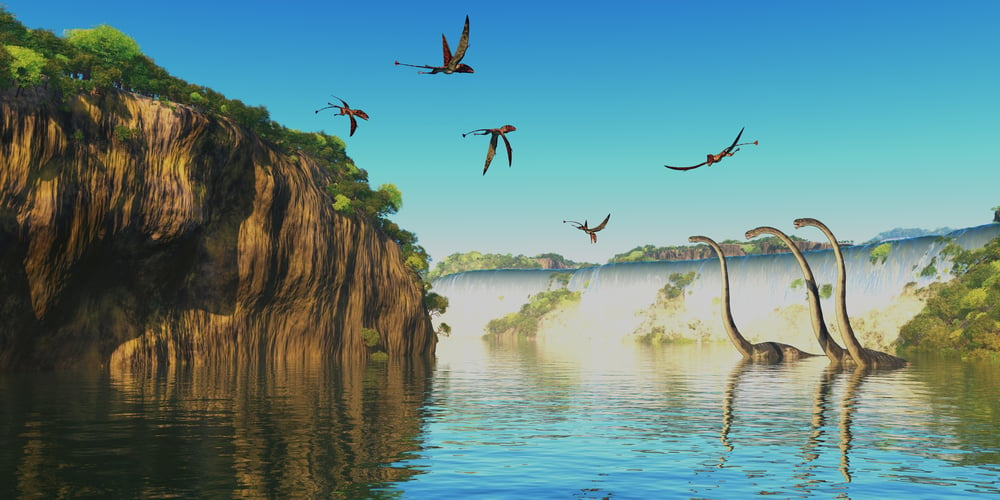 Much of the land was covered in deserts, and the climate was hot and dry, making it an ideal time for reptiles to rise. With a better ability to control their water loss than other mammals, thanks to their less porous skin, early dinosaurs had a major advantage. When Pangea split into two parts, marking the beginning of the Jurassic Period, the temperature began to fall slightly, although carbon dioxide levels in the air remained quite high. This drop in temperature and gradual shifting of the continental land masses resulted in vegetation flourishing, and plant species like ferns soon dominated the landscape.

The final phase of the Mesozoic Era was the Cretaceous Period, where the separation of continents had led to extreme diversity in dinosaur development and speciation, while more stable and complex ecosystems had allowed other small land creatures and mammals to develop, from snakes and rodents to tree-dwelling beasts and pollinating insects, which led to the eventual domination of angiosperms (flowering plants). Over the course of those 200 million years, dinosaurs ruled the Earth, and much of that was because the ecosystem, climate and their own physiology made it ideal for them to grow incredibly large, reproduce rapidly, and never run out of food to eat.

Throughout history, a number of different hypotheses have been presented for the incredible size of the dinosaurs, in comparison to the size of land animals today. One that was popularized for decades was the lack of an extinction event for such a long period of time when the dinosaurs ruled. It argued that animals would grow larger as they continued to evolve, but extinction events essentially “wiped the board clean”. Small creatures would once again have to start over in their evolutionary process from a diminutive size.

Fossil record has shown that dinosaurs’ size indeed fluctuated over the course of those millions of years. (Photo Credit : Orla/Shutterstock)

This theory has largely fallen from favor, however, as the fossil record has shown that dinosaurs indeed fluctuated over the course of those millions of years, rather than increasing in size in a linear trajectory.

Another popular theory is based on what the previous section describes, namely that the climate and ecosystems of the world were very different at the time of the dinosaurs. At times throughout the Mesozoic Era, carbon dioxide levels may have reached 3-5 times the levels of today, resulting in a massive overgrowth of plants and foliage. As plant life exploded around the planet, oxygen levels would have also soared (thanks to photosynthesis, of which oxygen is a byproduct). With such abundant food in so many parts of the world, and very few natural predators, the theory is that there was no inherent limit to how large these creatures could grow.

In the world today, with millions of different species, interconnected and complex ecosystems, and the dynamic impact of human beings on the planet, it would simply be impossible for massive creatures to survive, let alone thrive.

However, this second theory has also been thoroughly debunked by the geological and fossil records. As it turns out, the oxygen levels at the time of the dinosaurs were actually very similar to those of today, and lower than they were during the Carboniferous period (about 300 million years ago), when giant bugs took to the skies thanks to an abundance of atmospheric oxygen.

How Did Dinosaurs Grow So Large?

Most paleontologists and experts have now rallied around a far more credible theory, that the evolution of dinosaur physiology allowed them to grow to such massive sizes. More specifically, their manner of reproduction (eggs, rather than live births) and their respiratory system sets them apart from other large mammals we know today. As you may already know, dinosaurs are the ancient ancestors of birds, and some of those “avian characteristics” are responsible for their titanic size. 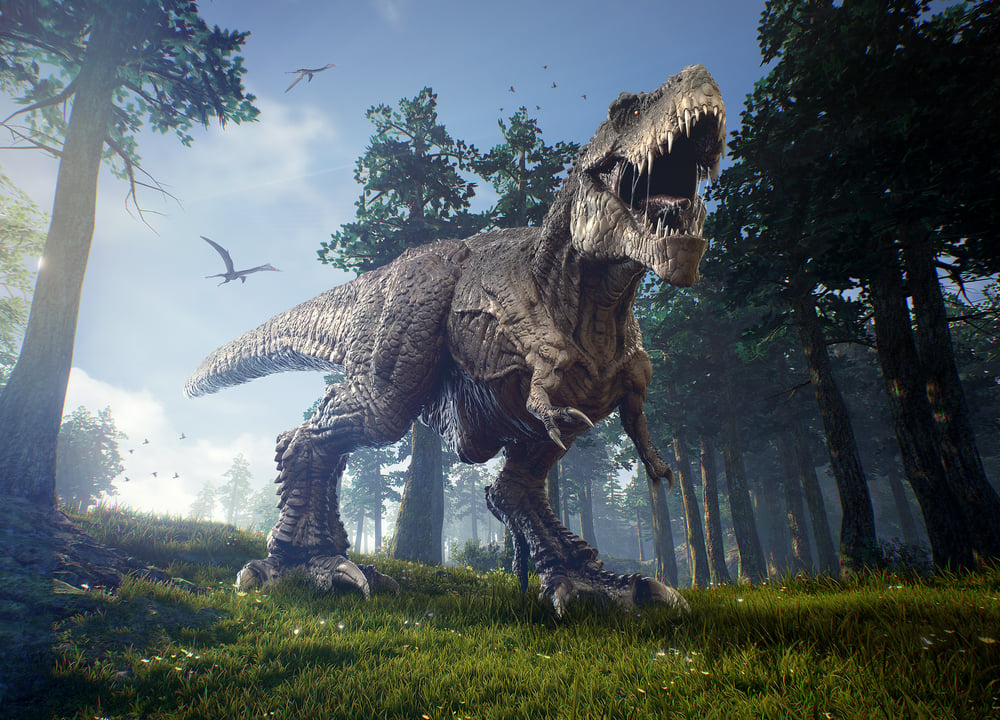 Just how did dinosaurs grow to be so large? (Photo Credit : Herschel Hoffmeyer/Shutterstock)

When we consider large mammals today, such as elephants, giraffes, bears or buffalo, these creatures have long gestation periods that require an immense expenditure of resources. Also, mothers are required to carry (typically) a single embryo for long periods of time, limiting their mobility and increasing their vulnerability to predators. When they finally give birth, they often care for and watch over their young, some for years, and may not become pregnant for another year or more. The fundamental limiting factor of a live birth, the size of the birth canal, also keeps mammals from growing to fantastical sizes.

Dinosaurs laid eggs, however, which externalized the entire process of reproduction and growth, and also allowed for many more “chances” for survival. A typical dinosaur may have laid 6-10 eggs at a time, and could do this more often, resulting in sporadic bursts of baby dinosaurs into an ideal ecosystem for their growth. With abundant plant life everywhere, it is believed that dinosaurs grew at tremendously fast rates, and were often on their own from birth, freeing up their mothers to continue feeding, hunting and reproducing, without contributing resources and energy to her offspring.

The second avian aspect of dinosaurs is perhaps the most interesting explanation for their massive size. The effect of gravity has a strong effect on large mammals; basically, their own weight will literally crush the rest of their body. If you put a blue whale, which can weigh up to 150 tons, on land, without the buoyancy of water to protect it, the sheer weight of its body would crush its other organs. The same thing would have been true of the largest dinosaurs, within the sauropod family, which could reach weights up 45 tons.

However, dinosaurs did not have the same respiratory system that mammals do. Instead, they had a system of air sacs, similar to birds, which allowed them to efficiently move and distribute oxygen throughout their bodies, while simultaneously infiltrating their bone structure. This hollowness of their bones decreased their weight significantly, allowing them to not only get the most out of the oxygen present in the atmosphere, but also preventing them from being crushed beneath their own massive size, since the weight was more widely distributed!

Regardless of how cool it would be to have dinosaurs or other massive mammals once again roaming the Earth, it’s not in the cards, at least not for a few million years. There are a number of factors that prevent this titanic rise, including a lack of ecosystems and the systematic elimination of large mammals as a result of human activity and development. However, on the most fundamental level, such incredible growth is impossible because there are no large animals exhibiting these ancient avian traits. With the exception of massive marine animals, who are helped by the buoyancy of water, modern creatures simply have a natural limit to their size.

Also Read: Why Don’t We Find As Many Human Remains As Dinosaur Fossils, Even Though Dinosaurs Are Much Older? 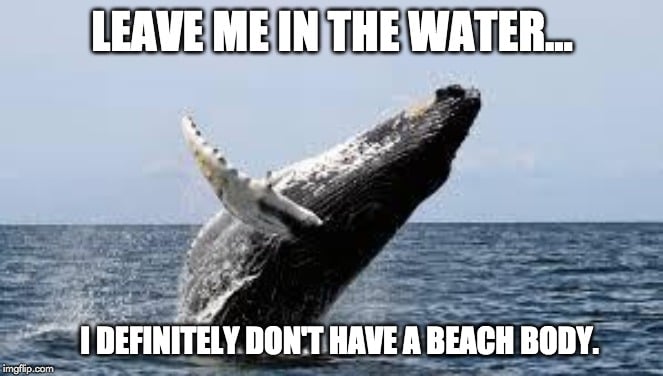 That being said, there are some creatures characterized by indeterminate growth, meaning that they will continue to grow slowly over their entire lifetime, which may be hundreds of years long! Creatures like sea turtles, crocodiles, sharks, mollusks, certain fish and other elusive creatures demonstrate this fascinating quality of immortality and slow growth, and researchers are still working to uncover their secrets! 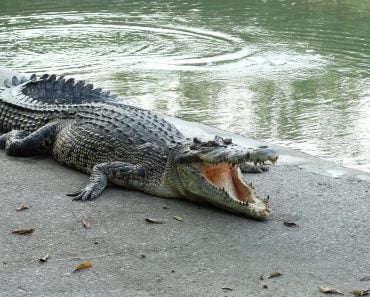