RFID or radio frequency identification is a technology that facilitates the wireless discovery and tracking of any object using high-frequency radio waves. At a very basic level, RFID consists of two things: a tag and a receiver.

The Covid-19 pandemic has made the whole world paranoid about touching things—especially in public places. Thankfully, there are a handful of “contactless” technologies that mitigate the need for touch.

RFID or radio frequency identification is a technology that facilitates the wireless discovery and tracking of any object using high-frequency radio waves. At a very basic level, RFID consists of two things: a tag and a receiver. A tag is attached to the object that needs to be identified/tracked. Depending on the type, the receiver tracks and provides information about these RFID tags in a given vicinity. 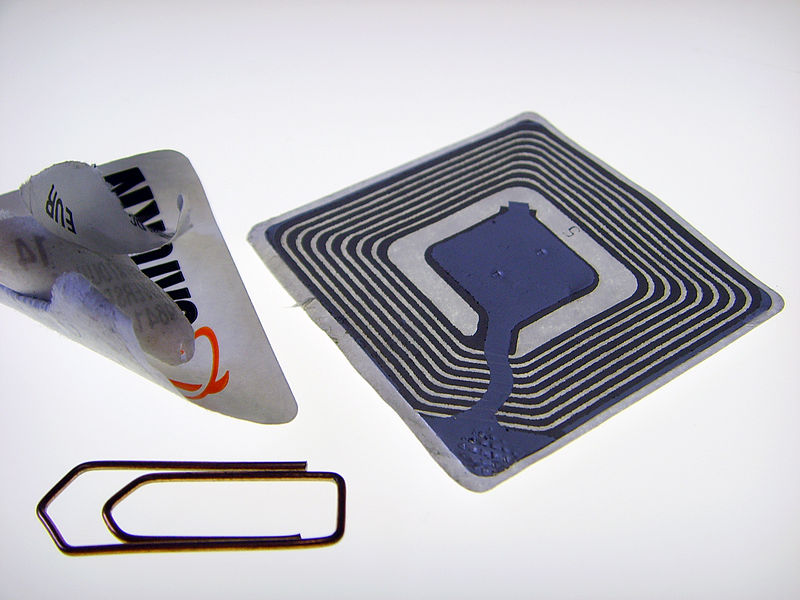 RFID: An Improvement On Barcodes

In the supermarket, you’re likely to come across a barcode (or QR code) on the products stacked in the racks. These bar codes help the shop owners keep tabs on their inventory.

Unfortunately, barcodes have problems. Just like infrared technology, the barcode is a line-of-sight technology. This means that for a product to be identified, the attached barcode must be in the line of sight of the barcode reader. When a large number of products have to be scanned, the time taken increases considerably. Another limitation of using a barcode is that they cannot store additional information, i.e., they lack a writable memory. 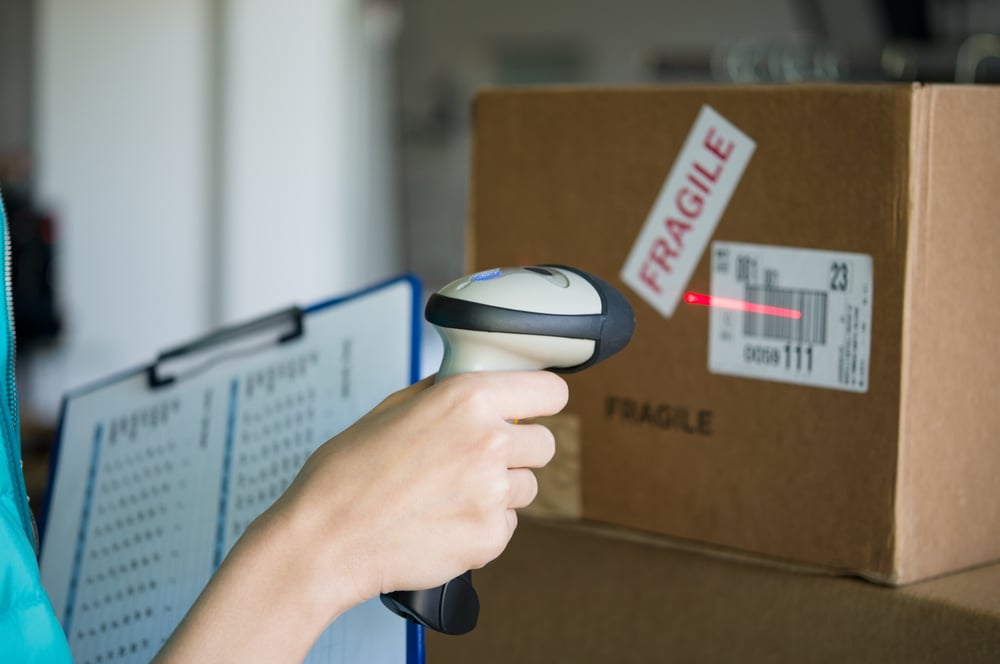 Man scanning a box with a barcode (notice that the barcode needs to be in the line of sight of the reader) (Photo Credit : Rido/Shutterstock)

RFID solves these two problems associated with barcodes, which is why RFIDs are becoming more commonplace. Given that they work on radio waves, the RFID reader does not need to be in the line of sight. Therefore, it could work wirelessly at any place within the stipulated range, just like your Bluetooth headphones or Bluetooth remote for a smart TV.

Another interesting implication of this technology is that if you try to pilfer a product from the store (with an RFID tag attached), the cashier will be able to detect that you possess that product!

Furthermore, some RFID tags also carry a small amount of memory (on the order of kilobytes) that can store useful information, such as the expiry date of the product.

Invention And Evolution Of RFID

Russian scientist Leon Theremin is often credited for coming up with the first RFID device in 1948, but it took a few decades before RFID could become popular for commercial use. This is because the original RFIDs of the 60s and 70s were inductively-coupled RFID tags. These were complex and bulky circuits, given that they employed metal coils, glass, and antennae—very different from the RFID chips and tags we see today.

Also Read: How Does Radar Work?

Modern-day RFID contains a microchip that can be thought of as the brain behind these tiny tags. Now, if you know the basics of electronics, you must be aware that all electronic circuits and components need power (electricity) to operate. The common and inexpensive RFID tags we use do not have batteries. This type of RFID is called passive RFID.

Passive RFIDs are commonly used in tagging low to medium value items, given that they are really cheap. They do not require external batteries to draw power. They simply extract power wirelessly from the receiver. Think of this like wireless charging an iPhone X. Passive RFID tags can survive on wireless power, as they need very little power for operation, but they do have a few limitations. The major limitation is the range, which generally has an operating range of only 3-6 meters.

To increase the range, active RFIDs were developed. Active RFIDs use dedicated batteries for operation. Therefore, due to the addition of batteries, they are bigger, bulkier, and more costly, but they boast a wider range of 30-100 meters. Basically, a valuable asset like a car would need active RFIDs, but for something rudimentary, like toothpaste, a passive RFID is good enough.

RFID is was originally targeted for supply chain businesses so they could easily track inventories. In a warehouse, they served as a means to automate the logistics. RFIDs are used in tagging and sorting stuff. They are generally linked to other electronic systems, so if products move without authorization, an alarm is triggered. This also serves as a good anti-theft mechanism.

RFID was eventually adopted in the sector of animal husbandry to track cattle. Similarly, pet owners are increasingly using RFID to track their pets. RFID is being deployed in automobiles too, as these tags can be programmed to link with a wallet or bank account. This way, a wireless toll payment can be made, provided that toll plazas have RFID reading systems installed. Moreover, RFIDs can be configured to trigger alarms in case an intruder tries to get into the car. 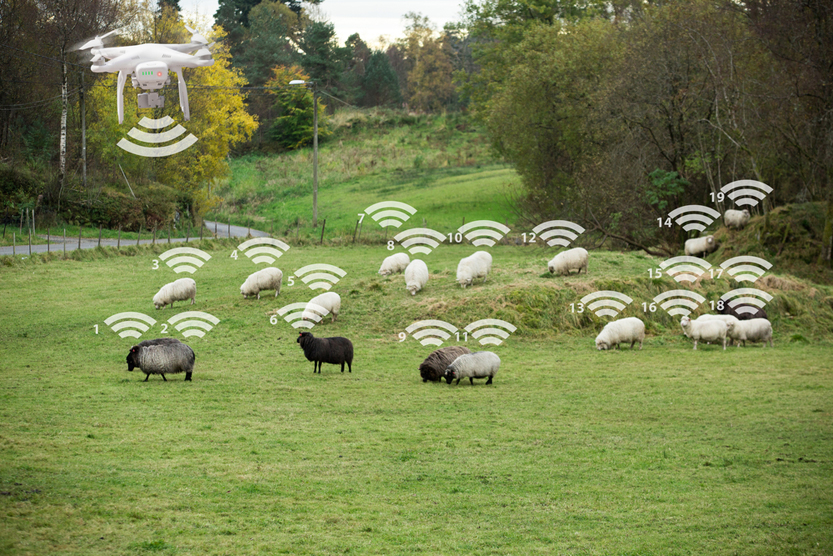 In 2006, the US government started using e-passports, which comprised RFID tags with embedded personal information inside for easy verification by security officials. However, many people have raised privacy concerns with this type of passports.

One of the ways RFID may be stretching too far is by getting inside the human body! Yes, there are people who have no qualms about putting RFID chips inside their bodies for better accessibility. This is called biohacking or human chipping. People who are part of the “body hacker movement” are hacking into their own bodies by leveraging the utility of RFID chips. They install RFID chips to get contact-free access to things without needing to carry additional keys or tokens. For example, with RFID implanted in their hands, some biohackers have programmed these RFID chips to open the door of their home or garage, without needing to carry keys! 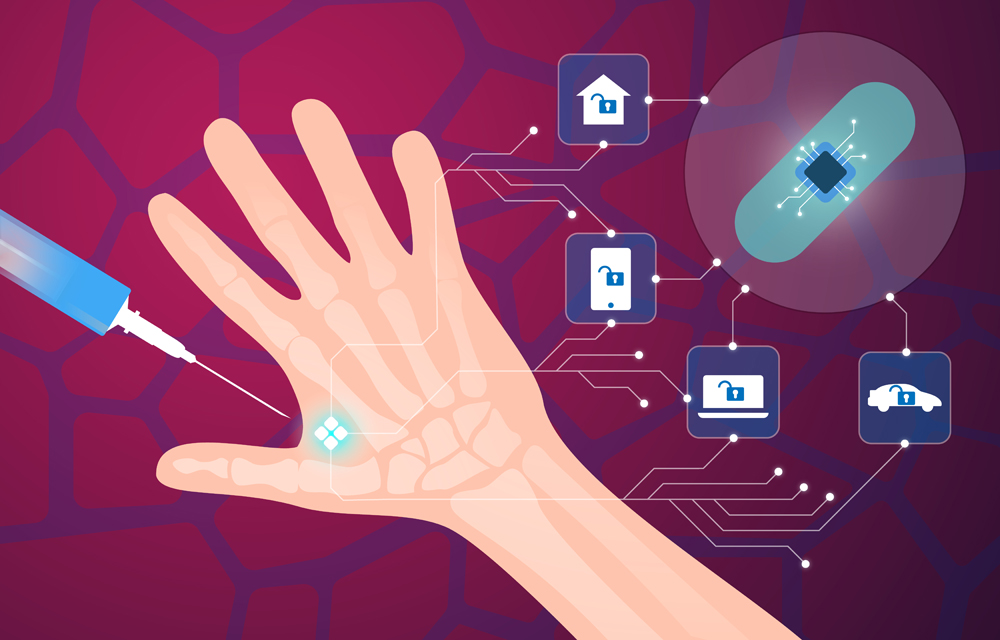 Illustration of a man getting RFID implanted in the hand (Photo Credit : graphicwithart/Shutterstock)

Some tech companies are also lobbying to put RFID chips inside the Covid-19 vaccine. They contend that it would help curb the counterfeits that will inevitably arise. They also claim that it would be helpful for health workers in keeping account of how many people have been vaccinated. Despite these arguments, global governments haven’t decided on whether to use RFID during vaccinations.

Many people are skeptical of the idea of implanting chips inside their bodies. Some even fear that in the future, some totalitarian governments may make it compulsory for RFID chips to be implanted in citizens’ bodies under the auspices of national security. In fact, in 2006, a company named CityWatcher.com asked its employees to get these chips inside their bodies for easier access to secured vaults where confidential documents were stored. However, the company clarified that this was optional and human chipping was done only to those employees who agreed to it voluntarily.

In the book Spychips: How Major Corporations and Governments Plan To Track Every Move With RFID, authors Katherine Albrecht and Liz McIntyre talk about potential future implications of RFID technology. They explain how it could be used to assess your spending patterns and wallet/bank balances. Companies could then use smart algorithms to charge you accordingly. For example, if they feel that a user has a lavish spending style, a product generally sold at $100 could be quoted at $150 to him/her!

Additionally, in our internet-connected world, chips inside our bodies means yet another way for hackers to get into our personal information. Authors in the book argue that a proficient hacker can disable built-in anti-theft features inside the RFID and get access to personal data without anyone detecting the breach.

In terms of the original motive of RFID—to quickly and wirelessly track things—they are spot on with that and getting better all the time. However, putting it inside the body is a controversial topic and will likely be met with strong opposition from people concerned with privacy. Some people feel that RFID is bringing us closer to an Orwellian society, wherein every move is tracked by Big Brother!