Biohacking, also known as “citizen science” or “do-it-yourself biology”, is the practice of modifying one’s biology in order to enhance performance, functionality or looks.

It is a part of human nature to want more. We want the best of things and we want to be the best that we can be. An emerging trend today is people trying to modify the biology of living organisms, to personalize living things or simply to make them better in some way. Biohacking is the term given to this scientific practice of improvement interventions.

So what exactly is biohacking?

Biohacking, also known as “citizen science” or “do-it-yourself biology” (DIY biology), is a broad term that includes methods to take control or modify one’s biology. It covers practices that can be used to optimize one’s physical and mental well-being. It’s a way to ‘hack’ one’s body in order to enhance its performance, like using cheat codes in GTA to gain more health and armor.

The movement started when Kevin Warwick, a professor of robotics and cybernetics at Coventry University, looked at his arm one day in the year 1998 and decided it was a great place to implant a radio frequency identification tag (RFID) to control electronic devices. He basically tried to morph into a cyborg! 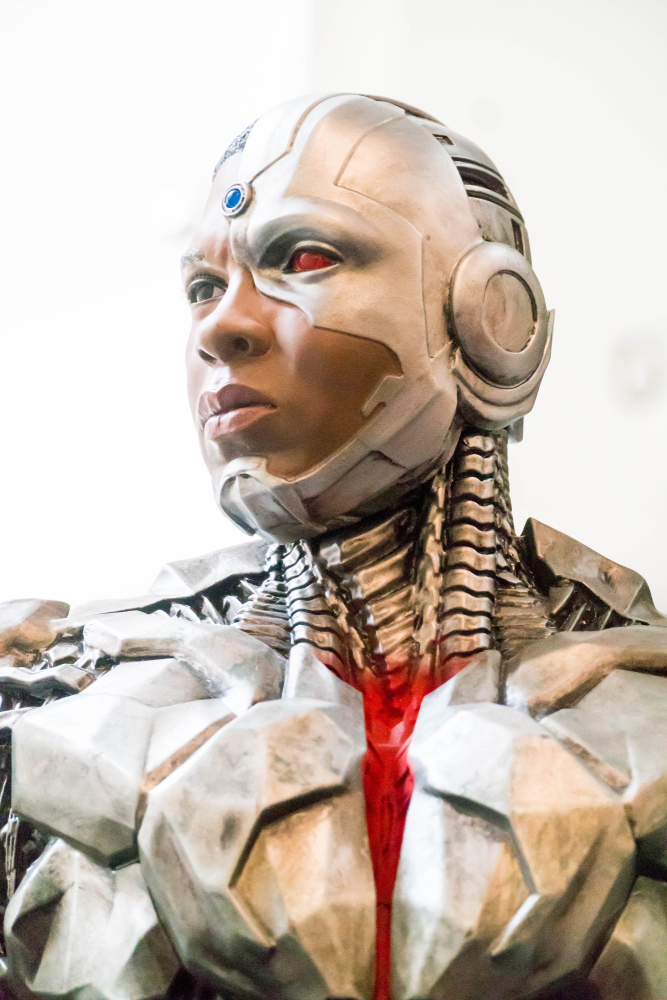 People who biohack are called biohackers or citizen scientists. They use the knowledge of biology to manipulate bodily function and structure to optimize themselves. Common applications of biohacking are to reduce stress levels, increase productivity, improve health or strengthen memory. It’s like ‘cracking the biological code’ for self enhancement.

Imagine that you’re preparing for a marathon and working on your endurance. You’re running at intervals while wearing a device on your wrist that tracks your pulse and body temperature. This device communicates through your phone, and delivers a text, reminding you to stay hydrated. That is also a form of biohacking!

Biohackers, like Warwick, who implant chips within their bodies (as opposed to external devices like the Fitbit), are known as grinders. They wish to either achieve the ability to communicate with electronic devices or some type of cosmetic enhancement. Grinders insert commercial or home-made devices into their bodies, which include implantable sensors, light sources, neodymium magnets, and RFID tags.

A biotechnology startup called Grindhouse Wetware manufactures implantable LED lights called Northstar that can be inserted in the hand, behind the knuckles. These lights turn on when a magnet comes into close proximity with its Hall effect sensor. A Hall effect sensor measures the strength of a magnetic field, and lights up the LEDs of the device with proportional brightness. Imagine having an intense red light shining from inside your skin!

It may sound like an odd modification to be done purely for cosmetic reasons, but who knows, a few decades down the line, it may be a fashionable trend to have lights glowing from inside your body.

Josiah Zayner, a biohacker with a PhD in Molecular Biology, believes in making genetic engineering accessible to everyone. His company, THE ODIN, makes DIY genetic engineering kits. One of his products is PreEngineered Fluorescent Brewing and Baking Yeast that can be used to make GLOW-IN-THE-DARK BEER at home! I have no idea if it is as toxic to your body as it sounds.

One radical example of biohacking is when, in 2017 at a biotech conference, Zayner injected himself with CRISPR-edited DNA. He claimed that this DNA would give him “bigger muscles”. However the risks of this are hard to determine. CRISPR is technique of genetic engineering; if you want read more about it, all you have to do is click here.

This CRISPR-edited DNA costs $20 and inactivates the myostatin gene. Muscle cells usually produce myostatin, a protein that inhibits muscle growth. If this gene is no longer functioning, myostatin won’t be produced and your muscles will grow.

Another form of biohacking is the science of nutrigenomics, an upcoming field that exploits the role that food has on gene expression. It is a way to influence your genes by changing what you eat.

Nutrigenomics considers nutrients as signaling molecules by which our gene, protein and metabolite expression changes. One drawback is that the same food will not have the same, or even a similar, impact on different people, due to their implicit genetic differences.

This problem can be solved to a degree, however, by having personalized diets put together by a professional based on your genetic profile.

A practical example of nutrigenomics is the consumption of probiotics. Probiotics or “good bacteria” can produce a host of chemicals that can alter gene expression in the body’s cells.

For example, lactic acid bacteria produce certain sugar polymers that can bind to cells in our intestine. Once these bacterial sugars are picked up by receptors on the intestinal cells, a signal is produced to produce and secrete inflammatory cytokines, which is why probiotics can potentially be used to treat inflammatory bowel syndrome (IBS).

You can also hack your body by synchronizing your circadian rhythm to your daily activities. Our circadian rhythm is also known as the sleep/wake cycle. It is a 24-hour internal biological clock that cycles between sleepiness and alertness, controlling the body through hormones produced by the nervous system. 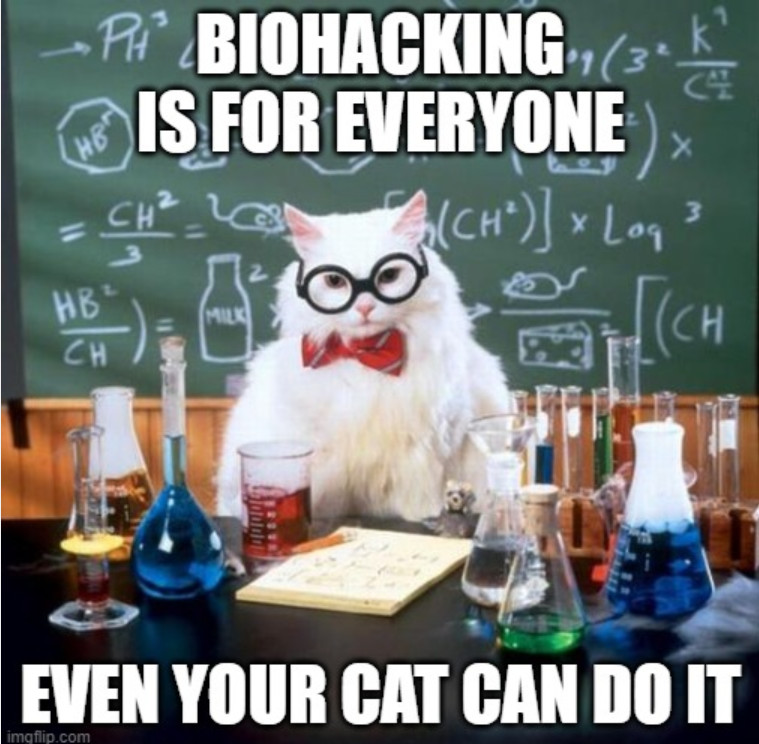 As long as your cat likes biology of course.

What are the problems associated with biohacking?

There are two main drawbacks associated with biohacking—safety implications and the invasion of privacy.

For any device inserted into the body, it is vital that it should be sterile and the material be compatible with the body. These are invasive procedures and if not done correctly, they can lead to dangerous complications, such as infections or injuries.

The devices need to be of impeccable quality; if they get damaged inside the body, or if any materials leak from the devices, it can be highly toxic to the body. There is also a risk of transmission of diseases if biohackers physically exchange devices between themselves.

One concern for the future is bioterrorism—the intentional release of pathogens to cause widespread sickness. DIY biology terrorists can just as easily use biotechnology to do harm, rather than good, creating deadly weapons with frightening ease.

In 2017, Mr. Ross Compton was in his house when it happened to catch on fire. In the statement he gave the police, he said that he quickly packed a few valuable things in his suitcase, broke a glass window from a room in his house, and seemingly escaped from there with a few important belongings.

However, this man had a pacemaker, which was very unfortunate for him. The police were suspicious of his story, so by using his pacemaker data (heart rate and cardiac rhythm before, during and after the fire), the prosecution was able to charge Mr. Compton with arson and insurance fraud.

A cardiologist who analyzed the pacemaker data stated that “it is highly improbable Mr. Compton would have been able to collect, pack and remove the number of items from the house, exit his bedroom window and carry numerous large and heavy items to the front of his residence during the short period of time he has indicated due to his medical conditions,” according to court documents.

The controversy was that the pacemaker data (collected by medical personnel at a hospital for use by a physician) was private medical information, so using it violated patient confidentiality. The courts, however, did not agree.

Biohackers commonly fear that their personal medical data can be used against them. The most common objection is about insurance companies misusing such privileged information to deny health care coverage to their policy holders.

Biohacking isn’t limited to body modification. Citizen scientists, with the help of crowdfunding, are working on an initiative known as the Open Insulin Project. Their goal is to develop a simple, inexpensive and open-sourced production method for insulin. If this project is successful, it would allow for more affordable insulin to the millions of people who need it. 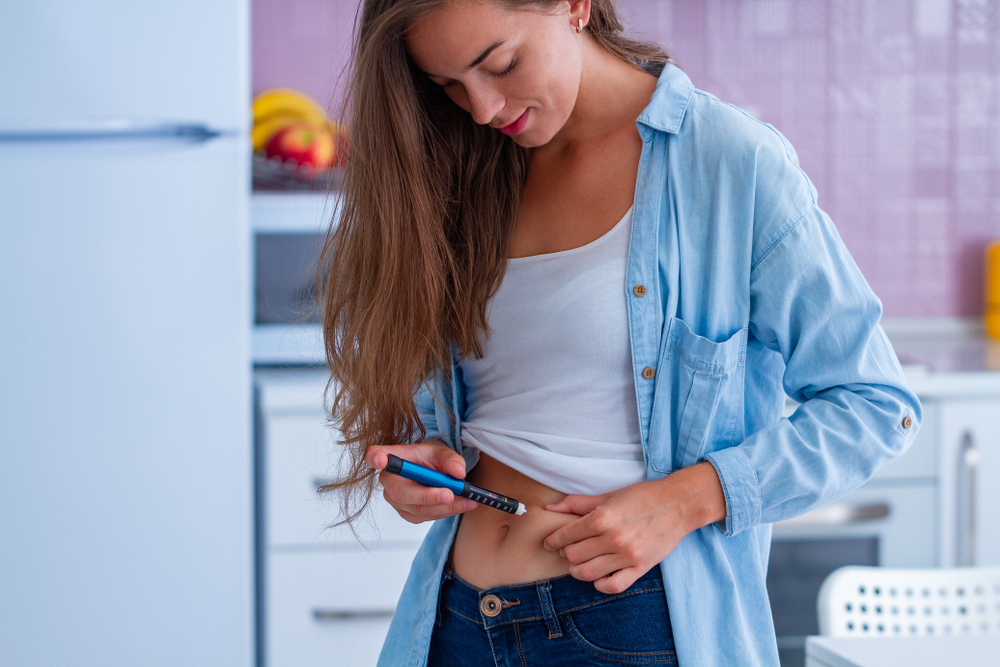 For an uninsured diabetic living in U.S.A, insulin can cost as much as $400 a month. (Photo Credit : goffkein.pro/Shutterstock)

Biohacking has opened up various possibilities to improve one’s health and wellness that can be followed relatively easily by DIY biologists. In a sense, this is allowing people to take control over their body.

What makes it so special that there is no insane funding, fancy laboratories, or close supervision (for adults) involved. The only requirement is a brain that is thirsty for biological knowledge. This new trend allows an individual to connect with their love for biology, without the need for a degree.

It is imperative that biohackers practice the highest safety standards when experimenting, as playing around with your own biology can be extremely risky. Be sure to consult a nutritionist if you want to know more about nutrigenomics or speak with professional doctors before performing any sort of body modification.