A transmission is a mechanical/electro-mechanical arrangement that amplifies or diminishes engine power before sending it to the wheels.

As a kid whose first set of toys consisted of scale models of cars and trucks, I was keenly observant of the driving regime my father practised. The act of frequently shifting the gear lever made little sense back then. It was only until many years later did I understand its significance, namely once I got behind the steering wheel of a car for the first time.

A gearbox is precisely what it sounds like: a box of gears. A transmission, on the other hand, is a more comprehensive term that refers to all the devices that increase or decrease the turning power supplied by an engine to the wheels. Essentially, it is an intermediary between the engine and the wheels.

A transmission is composed of two integral assemblies: a coupling assembly and a gearbox. 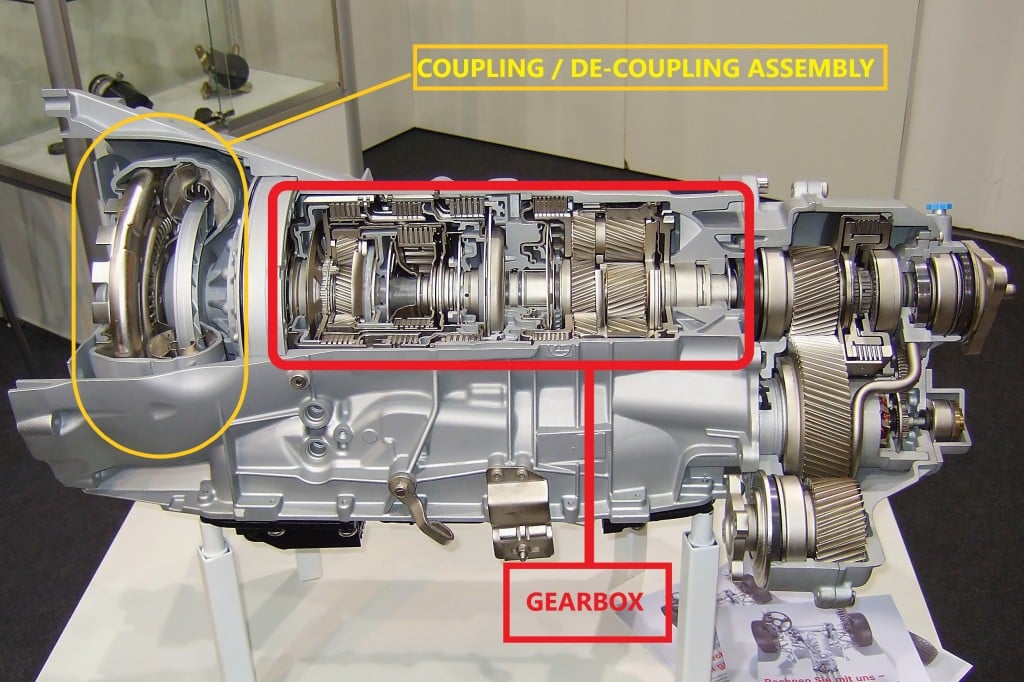 A transmission comprises of a coupling/de-coupling assembly and a gearbox (Photo Credit: Graziano_transmission / Wikimedia Commons)

How do transmissions work?

An engine has several parts that perform linear (straight-line) or rotary motion when fuel is burnt. One such part is the crankshaft. It is connected to various parts of the engine and is responsible for the transmission of the energy of combustion to motion. As fuel burns in an engine, the crankshaft rotates to produce turning force or torque, which is then transferred to the wheels. However, the torque produced by an engine is seldom enough, for example, to get a car moving from a standstill, or on a slope.

Therefore, torque modulation is needed. The transmission, as stated earlier, is an intermediary device between the engine and the wheels, and effectively serves this function. Torque modulation is achieved by selecting appropriately sized gears from those available in the gearbox. Apart from torque modulation, gearboxes also enable drive reversal; in other words, appropriate gearing allows wheels to move in reverse, rather than solely moving forward. 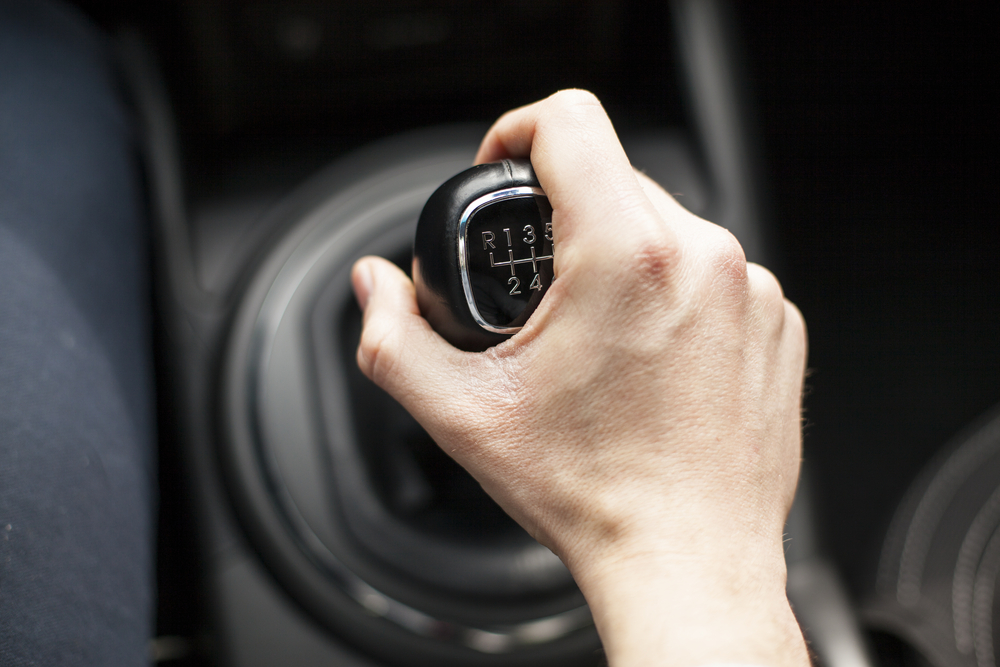 The selection of gears isn’t possible when the engine is connected to the wheels, which is why a coupling/decoupling device is needed. A coupling device can be mechanical (a clutch in manual gearboxes) or hydraulic (a torque converter in automatic gearboxes) in nature. When disengaged, it disconnects the engine and the wheels, allowing an appropriate gear to be selected.Upon selection of the gear, the clutch pedal is released to engage the clutch, thereby transmitting the required torque to the wheels.

What is torque modulation?

If you’ve ever run up a slope, you know how daunting of a task it can be. If you were to expend all your energy in pursuit of reaching the top as fast as possible, chances are you would run out of breath midway and be forced to stop. However, if you were to expend your energy in overcoming the force that gravity exerts on you, you would eventually make it to the top, though not as fast as you may have wished. The situation demands endurance over speed; running slowly and steadily is the only sensible option.

Now, consider a less tiresome scenario. If you were asked to run downhill, you would happily agree. With gravity on your side, you’d reach the bottom of the slope faster than it would take to read this sentence.

However, while running downhill, we often tend to lose control of ourselves and actively try to slow down in the face of the risk of tumbling down like a rolling stone. Is this a matter of endurance then? No. In fact, we’re over equipped with endurance for such a task. However, excess speed can cause us to lose control and end up as a messy bag of public humiliation and broken bones.

Compare this to running on the beach. It takes less endurance, as one doesn’t have to worry about overcoming gravitational forces or exercising restraint to prevent rolling and slipping. As you gather pace, your sheer momentum carries you on, and you don’t have to expend as much energy to keep moving quickly. 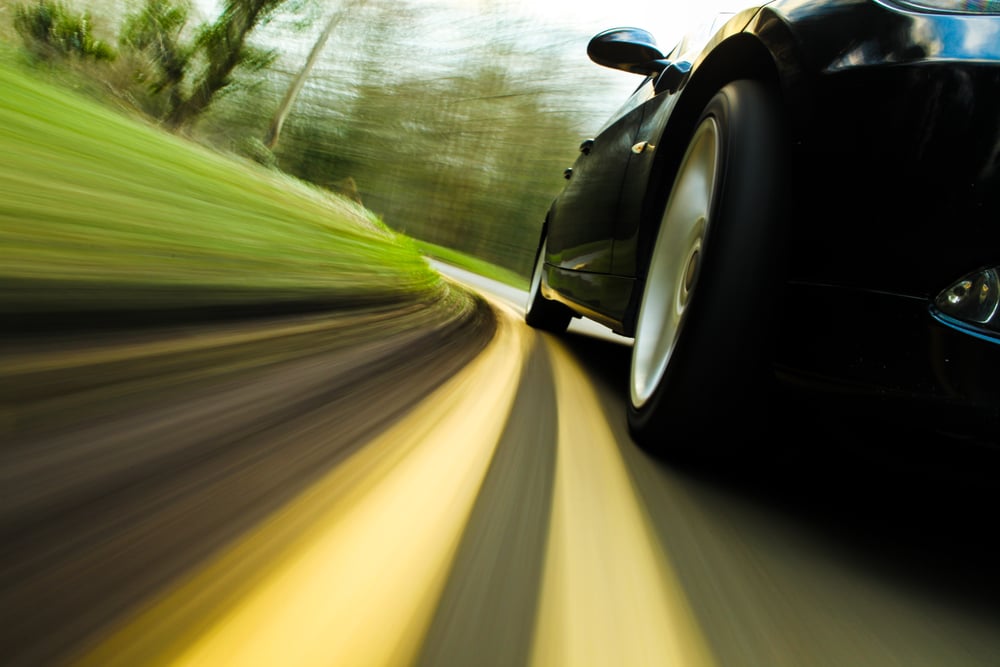 It’s necessary to shift into a higher gear at high speeds, as not much torque is required to sustain the motion (Photo Credit: fujji/Shutterstock)

The transmission of a car does exactly what our good sense does for us while running: it strikes a balance between the torque (endurance) and speed (the cause of public humiliation in the event of an uncontrolled descent while running) by a change of gears.

Gearboxes enable the generation of more torque at lower gears and more speed at higher gears, and one must shift gears, depending on the need for speed or torque.

A car moving uphill or downhill should ideally be in a lower gear for more torque and more speed control, respectively. However, upon reaching cruising speeds, using the same amount of energy as one would use in more endurance-oriented situations is not only wasteful, but detrimental to the engine’s integrity as well. This is why it’s necessary to shift into a higher gear to reach higher speeds.

The act of continually fidgeting with a lever, as one scuttles along the motorway suddenly isn’t as meaningless as it seems to be. While certainly not meaningless, it’s definitely annoying and tiring, leading us to the next question:

What are the different types of transmissions?

Automobiles are equipped with either a manual or an automatic transmission.

A manual transmission relies on the driver to engage/disengage the clutch and shift gears by means of a lever. Race car drivers still swear by a manual transmission, as it allows them to extract the maximum acceleration from each gear and provides them with more control over the car.

However, for daily driving, they are simply instruments of fatigue. This irritation led to the development of automatic transmissions, where the hassle of shifting gears is delegated to electromechanical systems. 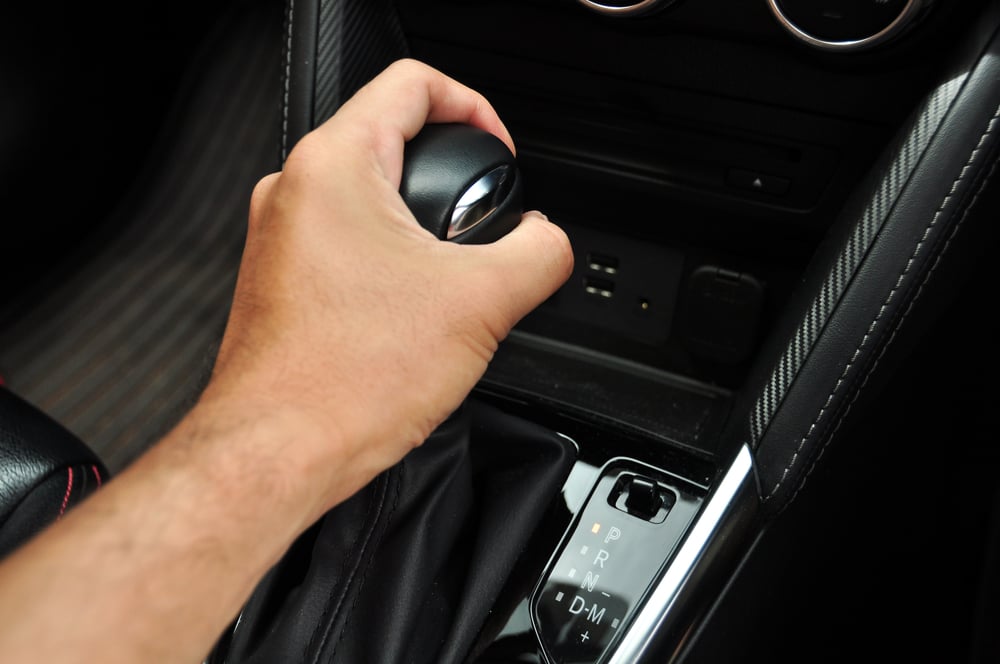 The hassle of shifting gears in an automatic transmission is delegated to electromechanical systems. (Photo Credit: baitong333/Shutterstock)

However, a segment of our global society remaining loyal to manual transmission created some chaos, which is why manu-matic transmissions were developed. They enable the driver to shift gears at will with the click of a button, without having to engage and disengage the clutch physically. 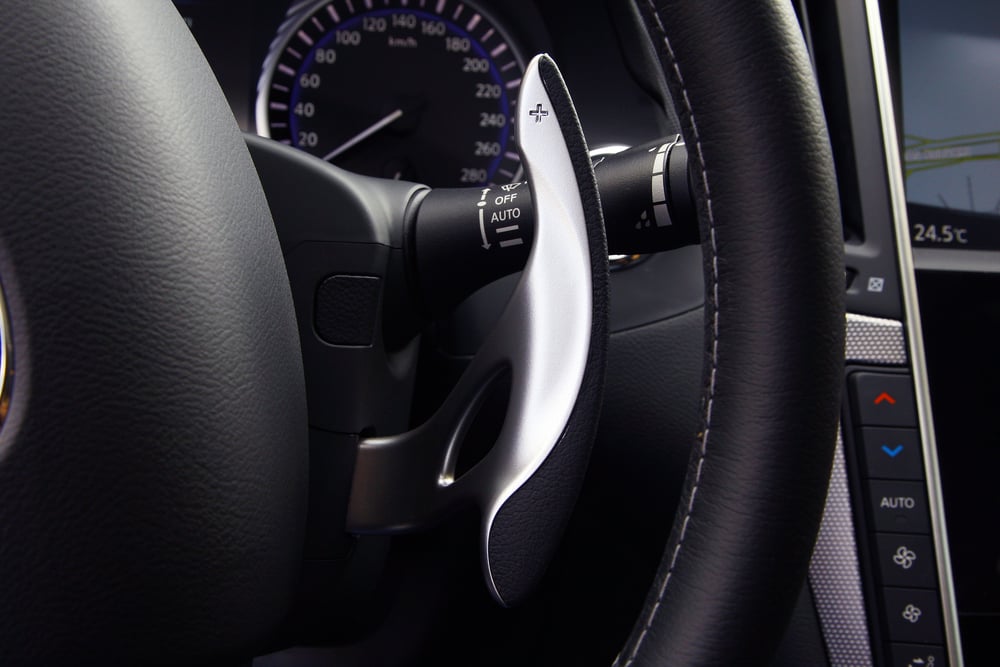 Paddle shifters enable the shifting of gears with the ease of clicking a button (Photo Credit: otomobil/Shutterstock)

The future of transmission

Gearboxes have an inherent disadvantage: the availability of torque. It’s only available up to certain RPMs, beyond which goading the engine onward will result in mechanical failure.

Having brought the internal combustion engine to the brink of extinction, the death of the transmission is also imminent. Electric motors are capable of supplying peak torque figures consistently.

With the advent of electric vehicles in the mainstream automobile realm, it’s only a matter of time before cars become efficient couches on wheels!