A traction control system is responsible for maintaining the traction (grip) of vehicle tires on slippery surfaces and curves to avoid tire slip when accelerating or de-accelerating. The system does so by either decreasing the power (torque) delivery or applying brakes to the slipping tires.

Friction plays a paramount role in how vehicles are able to move. An absence of friction, for instance, on a snowy or wet road is often the cause of accidents. However, we don’t always see vehicles slipping and colliding into one another on these dangerous roads. The traction control system in our vehicles is what we can thank for that. The traction control system, along with the differential, also helps us make smooth turns around corners. Without their joint effort, this wouldn’t be possible and our rear wheels would send us off-roading.

As the name suggests, the traction control system is responsible for controlling the traction of each individual vehicle wheel on the road, but what is traction anyway?

Since traction is nothing but a specific instance of friction, the friction formula, i.e, ƒ = μ.N, is also used to find the amount of traction. Here, the term ƒ represents the amount of traction or tractive force, μ is the coefficient of friction or traction (the two terms are sometimes used interchangeably in the field of vehicle dynamics), and N is the normal force exerted by the body on the road surface. The normal force is equal to the weight of the object and is given by the mass of the vehicle times gravity (N = m × g). The formula for traction can thus be expanded as:

As is evident from the above equation, the amount of traction a wheel has on a surface is dependent on two factors—the weight of the vehicle (m) and the coefficient of friction (μ). While the weight of the vehicle almost always remains constant (unless you’re driving the family home after Thanksgiving dinner), the coefficient of friction varies depending on the surfaces in contact and affects the amount of traction available to the vehicle. Coefficient of friction between tires & different types of road surfaces.

When the combination of these forces exceeds the amount of tractive force available, the tires slip. During a slip, a tire loses any and all traction with the road and starts spinning at a much higher rate than the rest of the tires. This leads to the driver losing control of the vehicle and may cause an accident; if this happens while turning, the vehicle may be propelled off the road. Taking a curve with and without traction control (Photo Credit : Chirachai Phitayachamrat/Shutterstock)

In the past, drivers would repeatedly brake and accelerate to gain traction on slippery roads, but this led to tire burnout and shortened their life. The traction control system was therefore introduced to maintain wheel traction and avoid tire slip, allowing for a safer driving experience on snowy, wet roads and while making turns.

How does the traction control system work?

The traction control system works by slowing only the slipping tire, thus helping it regain traction on the road surface. The system does this by either reducing the power delivery or applying brakes to that tire. However, the TCS does not have any hardware of its own and borrows the hardware of the antilock braking system (ABS) to function. Also, the control module of the TCS is housed within the electronic control unit (ECU) of our cars.

Each individual tire is monitored by a sensor that monitors their rotational speeds. The sensor data is fed to an onboard computer (ECS) that compares individual tire speeds and recognizes if there has been a sudden increase in the speed of one of the tires. In the case of slip detection, the TCS control module automatically sends a signal to the hydraulic brake modulator of the ABS to apply the brakes to the slipping wheel. To learn how the anti-lock braking system works, check out How Does Anti-lock Braking System (ABS) Technology In Cars Work? 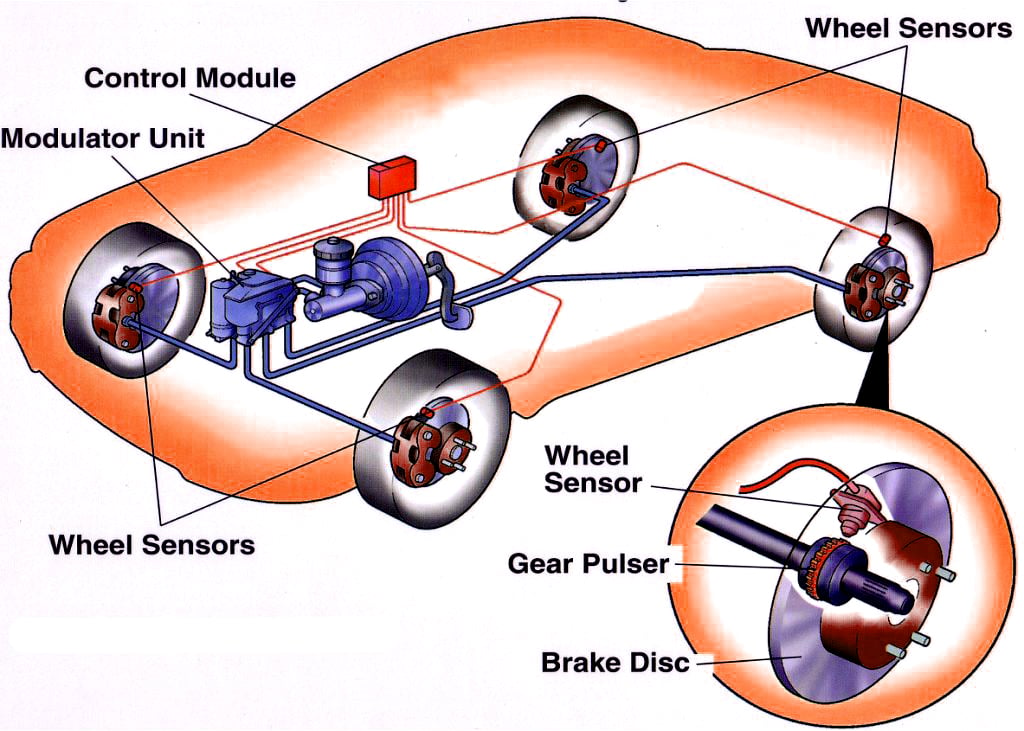 Another method by which the TCS prevents tire slip is by reducing the power delivery of the engine to the slipping tire. This helps in reducing the longitudinal force acting on the tire and thus reduces the combined forces (longitudinal and lateral) below the available tractive force. Power output can be reduced in multiple ways. These include reducing the fuel supply to one or more cylinders, containing spark sequence, and limiting throttle. However, when this method is implemented to prevent slippage, the driver may experience slight pulsations of the accelerator. These pulsations do not imply that something is wrong with the car, but are instead a result of the traction control system properly performing its function.

Sometimes, both methods—power reduction and brakes—may be used concurrently to avoid slipping and gain back traction. Once the tire regains the necessary traction, the driver will have complete control over the stabilized vehicle and can move forward safely.

It is advised to always have your traction control engaged, as it makes for safer driving. That being said, there are certain situations when the system might be doing too good of a job and turning it off would be more beneficial.

One particular situation when turning the traction control system off comes in handy is when your vehicle is stuck in snow, ice or mud. When stuck, the car requires extra juice (power) from the engine to escape and get going, but the TCS may prevent the tires from receiving this extra torque. Turning the TCS off will allow the tires to wield their extra power and free themselves of the clinging snow/mud. Simply turning your car off and back on should reactivate the TCS and let you drive safely again.