ABS prevents the wheels from locking up, thus avoiding uncontrolled skidding of the vehicle and decreases the distance travelled without slipping.

Driving on expressways can be fun and thrill-inducing, as many of you surely know. One gets to unleash a car’s full potential. The city roads keep us grounded, but as soon as you hit the highway, there’s no looking back. You’ll almost never see a car going below 100 km/hr.

The situation gets particularly tricky during monsoons, as cruising in a car at such high speeds is a perfect recipe for a disaster if the roads are slick. Even so, it does happen, so what do you do in a situation on a slippery road when you have to suddenly apply the brakes of your car? Without an anti-lock brake system, the wheels of your car stop spinning and the car will begin to skid. You’ll completely lose control over the car and the results can be deadly.

Anti-lock braking systems (ABS) take a lot of the challenge out of this sometimes nerve-wrecking event. In fact, on slippery surfaces, even professional drivers can’t stop as quickly without ABS as an average driver can with ABS.

What is Anti-lock braking system (ABS) in cars?

As the name signifies, the anti-lock braking system is a safety system in cars and other automobiles that keeps their wheels from locking up and helps their drivers to maintain steering control. Also referred to as anti-skid braking system sometimes, it enables the wheels of a vehicle to maintain tractive contact with the ground so that they don’t go into an uncontrolled skid.

With ABS, you have more control on your car during situations such as sudden braking. Basically, it is designed to help the driver maintain some steering ability and avoid skidding while braking.

With ABS, you get better stability and control over a car while braking (Image Source: www.toyota.lk)

A skidding wheel (where the tire contact patch is sliding relative to the road) has less traction (grip of the tire on the road) than a non-skidding wheel. For example, if your car drives over a road covered in ice, it is unable to move forward and the wheels will keep spinning, since no traction is present. This is because the contact point of the wheel is sliding relative to the ice.

ABS modifies the brake fluid pressure, independent of the amount of pressure being applied on the brakes, to bring the speed of the wheel back to the minimum slip level that is mandatory for optimal braking performance.

This sensor monitors the speed of each wheel and determines the necessary acceleration and deceleration of the wheels. It consists of an exciter (a ring with V-shaped teeth) and a wire coil/magnet assembly, which generates the pulses of electricity as the teeth of the exciter pass in front of it.

The third step is repeated until the car comes to a halt. The resistance that you feel when braking suddenly at high speeds is actually the brake valves controlling the pressure that is being transferred to the brakes from the master cylinder. 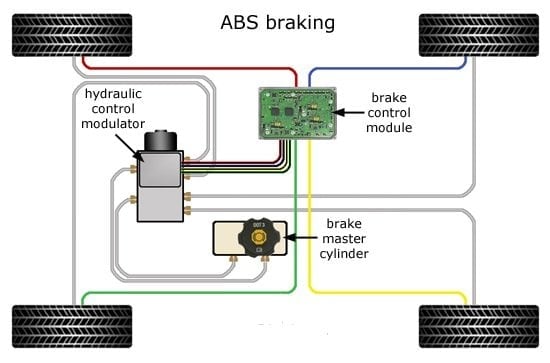 The ECU is an electronic control unit that receives, amplifies and filters the sensor signals for calculating the wheel rotational speed and acceleration. The ECU receives a signal from the sensors in the circuit and controls the brake pressure, according to the data that is analyzed by the unit.

While braking, if a wheel-locking situation is detected or anticipated, the ECU alerts the HCU by sending a current and commands it to release the brake pressure, allowing the wheel velocity to increase and the wheel slip to decrease. 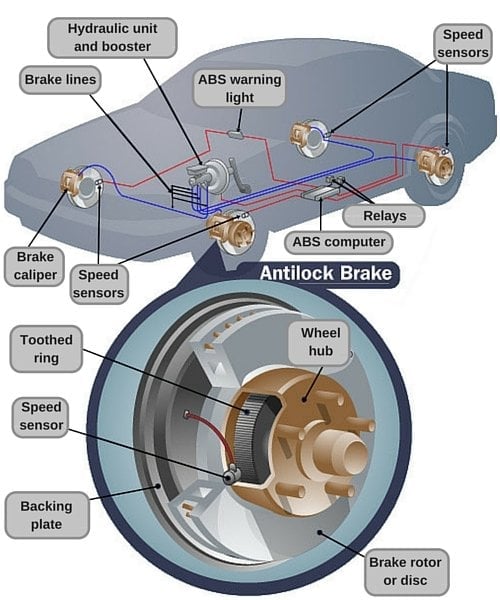 Working components of an ABS.

When the wheel velocity increases, the ECU reapplies the brake pressure and restricts the wheel slip to a certain degree (Note: When the braking action is initiated, a slippage between the tire and the road surface in contact will occur, which makes the speed of the vehicle different from that of the tire). The Hydraulic Control Unit controls the brake pressure in each wheel cylinder based on the inputs from the system sensor. As a result, this controls the wheel speed. This process is repeated for the next braking operation.

ABS is classified based on the number of sensors and the types of brakes used. Brakes can also be differentiated by the number of channels, i.e how many valves are individually controlled and the number of speed sensors.

This is the best combination for an effective ABS system. There is a speed sensor on all four wheels and a separate valve for all four wheels. With this setup, the controller monitors each wheel individually to ensure that it is achieving maximum braking force.

This combination, which is commonly found on pickup trucks with four-wheel ABS, has a speed sensor and a valve for each of the front wheels, along with one valve and one sensor for both rear wheels. The speed sensor for the rear wheels is located in the rear axle.

Similarly, there are also two-channel and one-channel ABS. The one-channel variant is the least effective, as you might expect.

Most new cars come equipped with ABS, as it is considered one of the most important safety features in cars. Current research shows that cars equipped with ABS are far less likely to be involved in multi-car accidents, because they still have access to steering capabilities. ABS has completely revolutionized the automobile industry to the point where a car without ABS is like a coffee mug without a handle!

How much do you know about the anti-lock braking system?