The process of compressing and feeding dense and oxygen-rich air into an engine to improve combustion characteristics is known as forced induction.

If someone told you that automotive engines breathe just like humans, you would probably dismiss the idea as delusional. However, think of it this way… every combustion reaction includes the consumption of oxygen to liberate energy in some form, so let’s extend this same logic to engines. It is universally known that engines run on fuel, but this is only partially correct, as fuel requires oxygen to burn and cannot combust by itself. 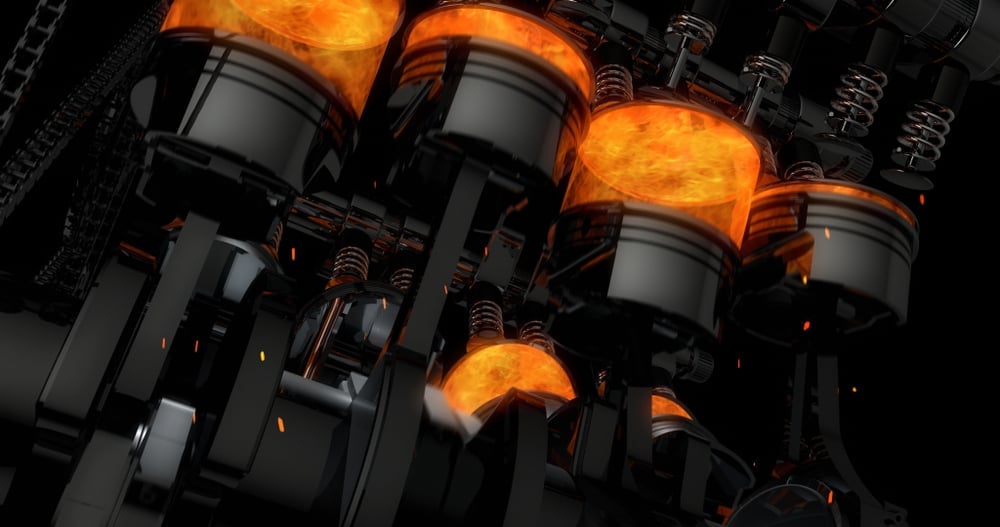 A mixture of air and fuel is burnt inside the engine to generate energy, which is harnessed as mechanical power (Photo Credit : yucelyilmaz/Shutterstock)

Thus, all cars are fitted with an intake system that sucks, filters and mixes air with fuel to form a combustible ‘charge’ that is then supplied to the engine. This charge burns and generates energy, which is then harnessed as mechanical power and can be made to turn wheels.

What is natural and forced induction in automobiles? 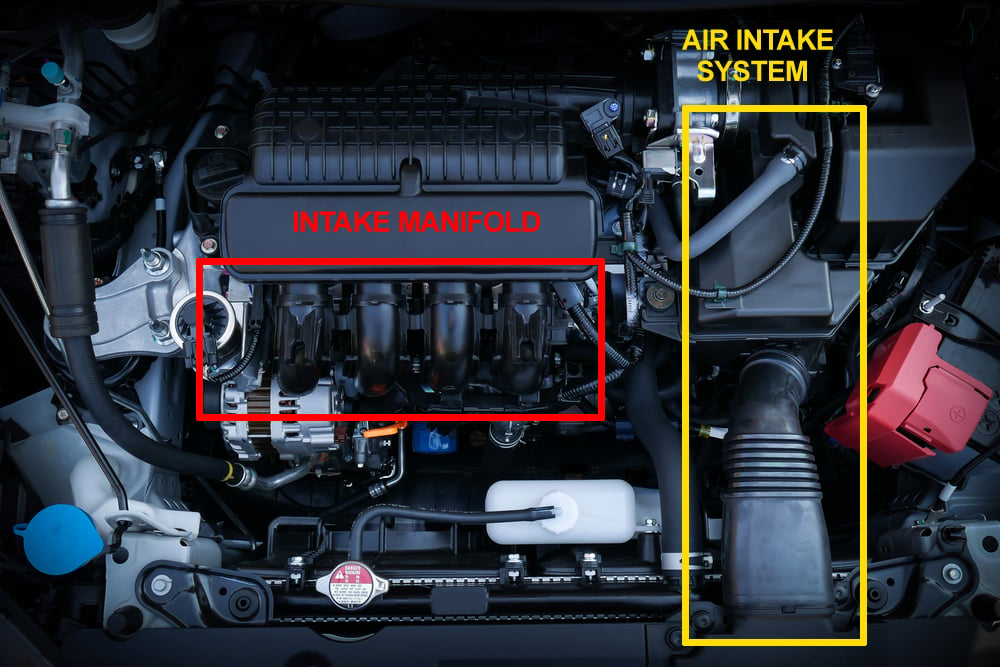 An air intake system draws in fresh air from the atmosphere and supplies it to the engine through the intake manifold (Photo Credit : One Photo/Shutterstock)

The process of feeding air to the engine so that combustion can take place is known as aspiration or induction. Induction can either be natural or forced, depending on the architecture of the engine.

An engine that draws in air at atmospheric pressure by creating a vacuum in the air intake system is known as a naturally aspirated engine, and the phenomenon is called natural induction.

However, certain engines are equipped with devices that enable them to draw in air at a pressure higher than the atmospheric pressure. These devices are called superchargers, and the process is called forced induction.

What is forced induction?

The concept of forced induction is easily explained with the “suitcase analogy”. Running out of space in our suitcases is a common occurrence when traveling. While it’s logical for us to simply get a second bag, we unpack and try to squeeze in as much luggage into the first bag as possible, in order to avoid the hassle of a second bag altogether.

This ‘more efficient’ packing allows us to haul extra luggage (and shop more, if we’re on vacation) without requiring an extra bag. The same concept can be applied to engines. In theory, an engine can only pack in so much air-fuel mixture to help it generate its rated power. To make more power, one must ideally look for a bigger engine, but forced induction can help “cheat” by squeezing more charge into the same space, thereby helping to burn more fuel and generate more than the rated power.

As stated earlier, air compression is achieved by means of a device called a supercharger.

Superchargers are mechanical pumps that compress air and feed it to the intake manifold (the passageway through which a combustible charge enters the combustion chamber in the engine).

Pumps need power to run, and a supercharger is no different. The supercharger will derive power from the engine using a pulley and a belt to compress the air and feed it back. However, just like the supercharger, many other vital functions, such as air conditioning and power steering, are dependent on the engine itself. A supercharger therefore adds to the load on the engine, which offsets the benefits. This encouraged the development of the turbocharger, a device that does not rely on engine power, but rather on exhaust gases! 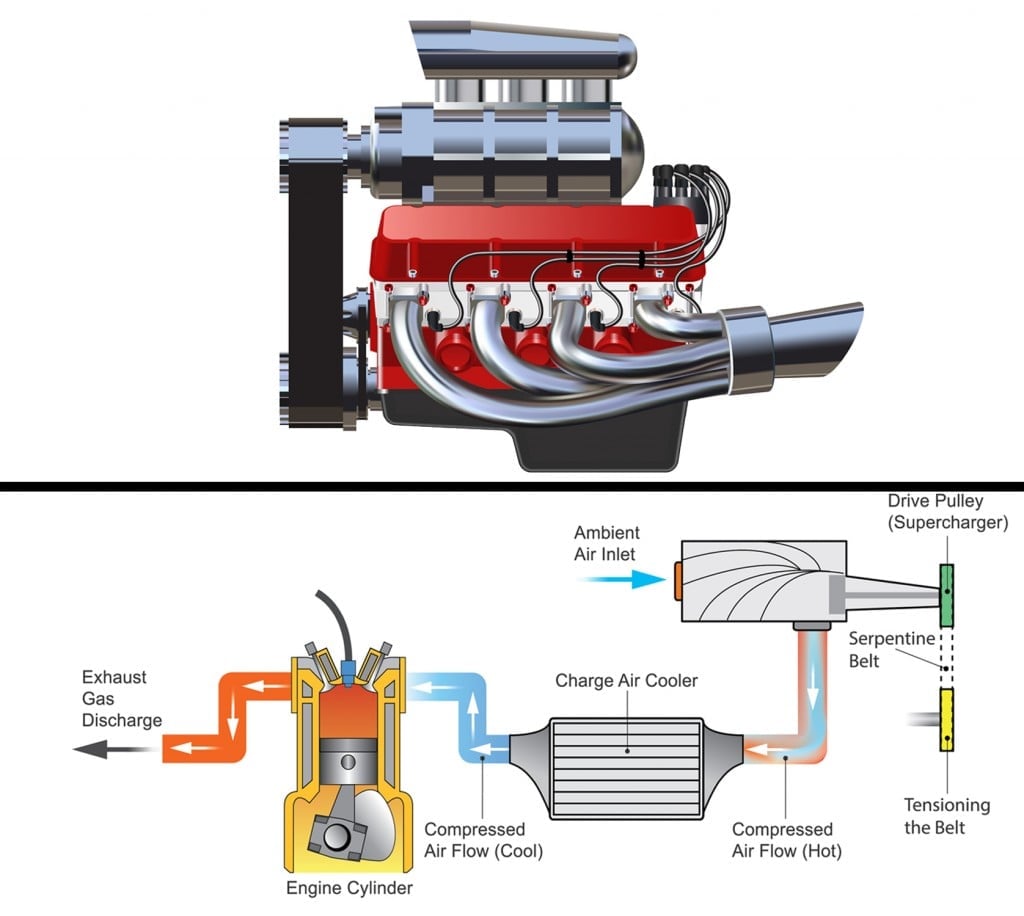 A turbocharger is a mechanical device comprised of a turbine connected to a compressor. Exhaust gases from the engine rotate the turbine on their way, which in turn rotates the compressor. This compressor now compresses fresh air and feeds it to the engine, thus achieving what a supercharger would achieve without the additional load on the engine. 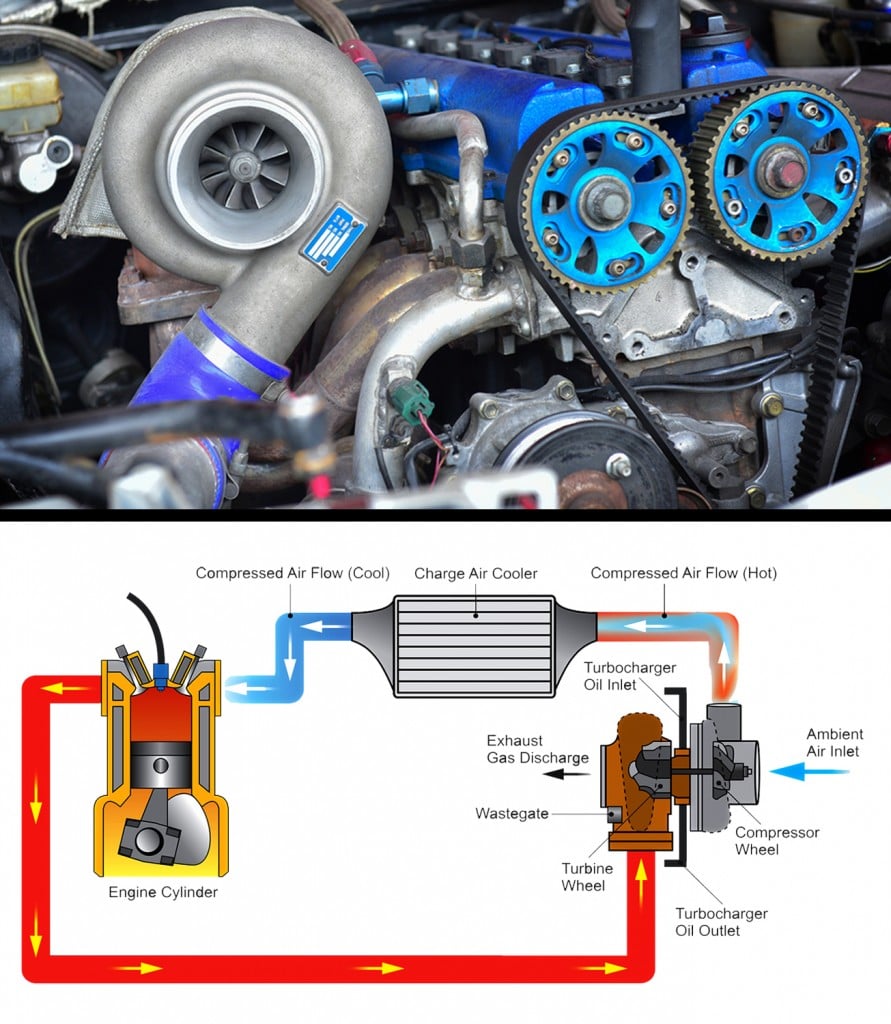 Above: A turbocharger, Below: A turbocharger takes power from the exhaust gases to compress air and feeds the fresh air to the engine (Photo Credit : Sanit Fuangnakhon& Studio BKK/Shutterstock)

Forced induction systems also contain a critical support system: the intercooler. As air is pressurized in the superchargers, its temperature rises, which can cause premature combustion inside the engine, which is detrimental to the engine’s integrity in the long run. Thus, pressurized air is passed through a heat exchanger that cools it before it’s fed to the combustion chamber. This process of heat exchange is known as intercooling.

Although turbocharging is a subset of supercharging, these terms find distinct usage in the automotive industry. While supercharging, per se, has become less frequent, the popularity of turbocharged setups is on the rise.

Advantages and disadvantages of supercharging (and turbocharging)

As it becomes possible to squeeze more air and fuel into the same space, you can get more power without having to invest in a bigger engine. However, this power comes at a cost, resulting from the inherent disadvantages of the construction of forced induction devices.

The most significant disadvantage comes in terms of reduced fuel economy, due to squeezing more fuel into the engine. To combat this disadvantage, engineers now equip cars with smaller engines to generate the same power as their larger counterparts, while employing forced induction. 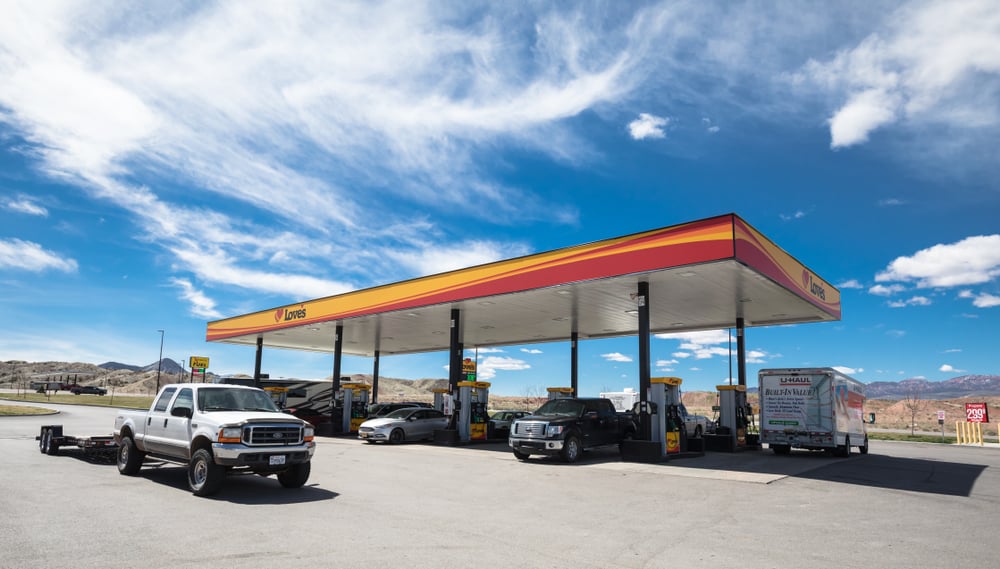 A bigger engine in pick up trucks, for example, will consume more fuel when compared to passenger cars due to more capacity (Photo Credit : Nuk2013/Shutterstock)

For example, a car that was originally equipped with a 2-liter (capacity for air-fuel mixture) engine making 120 kW of power can produce the same power as a turbocharged 1.2-liter engine. Since the size of second engine is smaller, it will consume less fuel and keep the mileage from suffering.

The second disadvantage is that superchargers and turbochargers do not supply extra power immediately. This results from the moving parts of these devices not reaching full operating speeds immediately due to inertia. The gap between pressing the accelerator and getting a boost from the engine is known as boost lag. It is very prominent in turbochargers.

Current use and the future of forced induction

Forced induction finds use in both commercial and performance-based applications. For car manufacturers, it’s an easy way to deliver small engines that are compliant with safety and emission norms, while still providing a decently powerful car. In the performance and modification culture, it’s an inexpensive way of generating more power within an already powerful system.

The future of forced induction is bleak, however, as it’s destined to meet a very inevitable demise when the internal combustion engine disappears in the not-so-distant future!