A scramjet engine is a supersonic-combustion engine that ditches the compressor and turbine of a typical jet engine and can attain speeds greater than Mach 5!

A few months ago, India’s DRDO (Defense Research and Development Organization) made the news for successfully conducting the maiden flight test of its unmanned scramjet demonstration aircraft for hypersonic speed flight. Yes, that’s a mouthful. The demonstration aircraft was officially called the ‘Hypersonic Technology Demonstrator Vehicle (HSTDV)’. The aircraft was designed to achieve speeds greater than Mach 6. To put that into perspective, a passenger aircraft travels at a speed significantly below Mach 1.

Speeds of Mach 6 or higher are achieved by using scramjet technology. Scramjet technology is extremely difficult to develop and, before India, only three other nations (USA, Russia, and China) have been successful in developing such a technology. 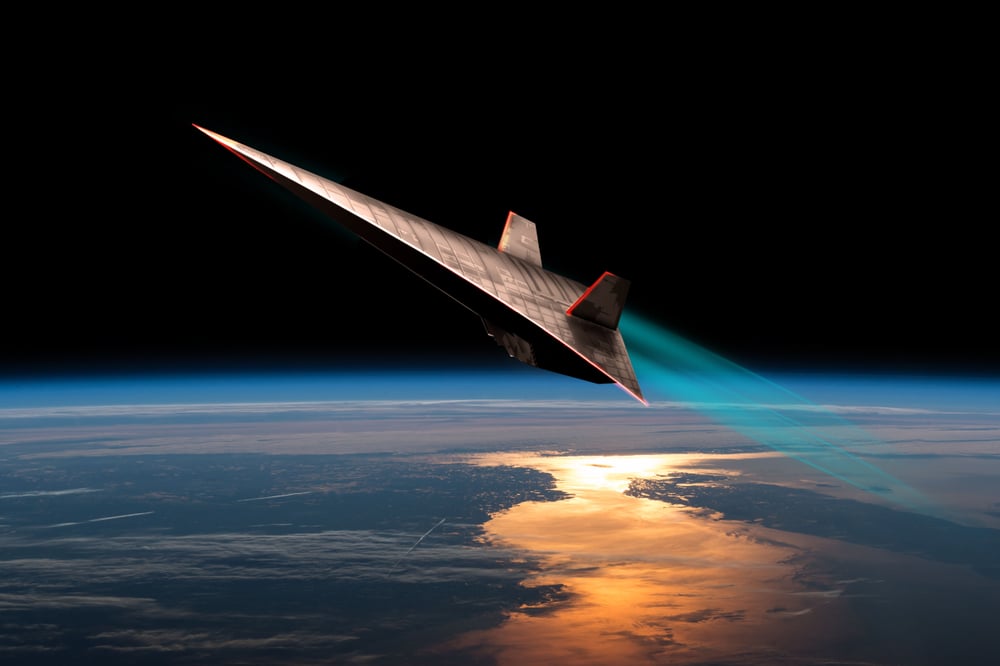 Vehicles powered by scramjet engines have been proposed to attain speeds of Mach 12 and higher. (Photo Credit : Marc Ward/ Shutterstock)

What Are Jet Engines?

Before we take a closer look at scramjet engines, let’s touch upon jet engines in general. Jet engines are combustion engines that generate thrust (or movement) through jet propulsion. These engines find application in high-speed situations, such as jet airplanes, fighter jets, missiles and drones. Jet engines are also modified for use in high-speed cars and power plants. A basic jet engine works on the same principle as a traditional gas turbine.

A basic jet engine consists of a fan, a compressor, a combustion chamber, and a turbine. (Photo Credit : Stanislav-Z/ Shutterstock)

The compressor, composed of multiple blades rotating at high speeds on a shaft, then compresses the incoming air. The pressure and temperature of the air increases and the speed drops as a result of this compression. Whereas in the combustion chamber, fuel is sprayed on the compressed air and a spark from the spark plug ignites the mixture.

Shortcomings Of The Traditional Jet Engine

A major drawback of the traditional jet engine is the number of moving parts it incorporates. The list includes the multi-stage compressor and turbine rotors, as well as other mechanical components, such as spark plugs, cooling systems, afterburners, a fuel control unit, prime mover, etc. These components add a lot of weight to the overall engine, making the entire vehicle heavier. The engineering complexity and the number of elements that could fail and lead to an engine failure or shutdown also increase dramatically with so many parts.

The compressor reduces the incoming air to subsonic speeds in a conventional jet engine. Thus, a limited amount of thrust can be generated as the exit jet velocity also remains under subsonic levels.

Moreover, the dream of traveling from one place to another on Earth at supersonic speeds isn’t attainable with a regular jet engine. Most jet engines can only accomplish subsonic speeds, i.e, speeds below Mach 1, although a very small number can fly at speeds of around Mach 3.

This is where ramjets and scramjet engines come into play.

What Are Ramjet And Scramjet Engines?

Ramjet and scramjet engines are jet engine variants that ditch the rotary compressor and turbine from a regular jet engine. The two models rely on the natural ramming of air to produce thrust. The basic operating principle in ramjets and scramjets involves converting the significant kinetic energy of the incoming hypersonic (speed greater than Mach 5) or supersonic air into pressure energy.

Air flowing at hypersonic speeds has very high dynamic pressure. Dynamic pressure is also called velocity pressure and is formally defined as the kinetic energy per unit of volume. You might remember it as a term in Bernoulli’s equation (P + ½ ρ v2 +ρ g h = constant, where the term ‘½ ρ v2‘ is dynamic pressure).

Thus, ramjets and scramjets require assistance for their initial take-off until the plane attains a specific speed. Both types operate efficiently only when the surrounding air is flowing at no less than supersonic speeds, starting from Mach 3. 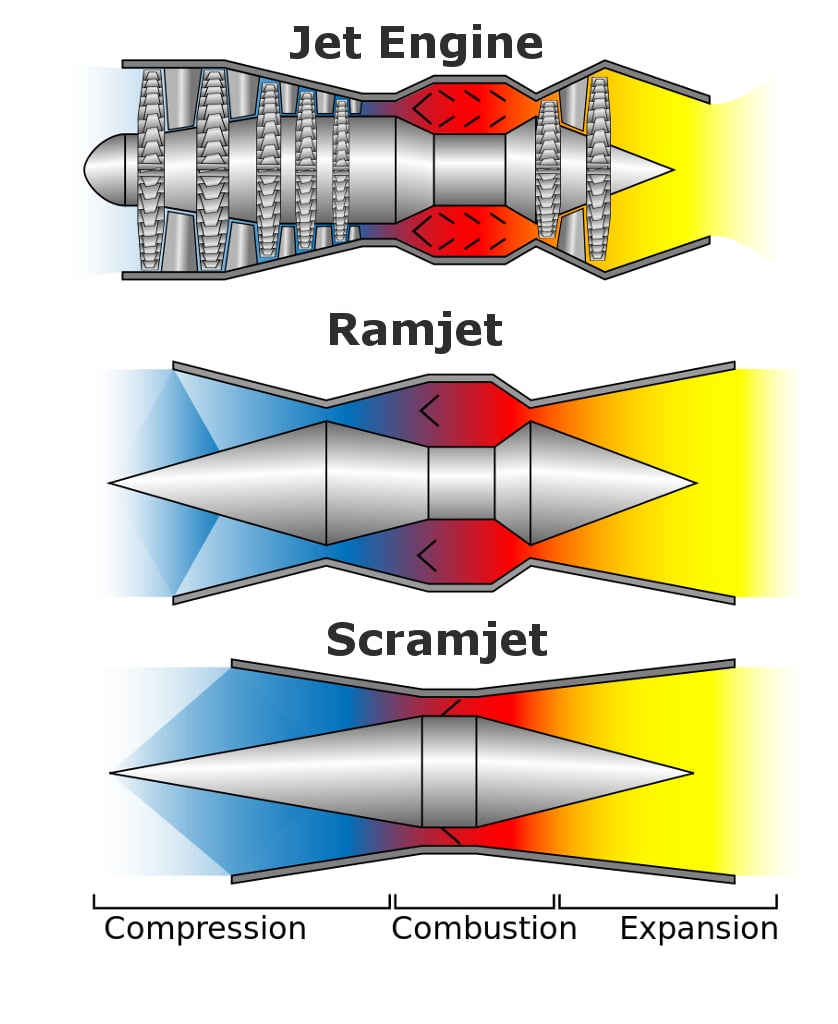 Ramjets and scramjets do not make use of a rotary compressor and turbine to generate thrust, instead relying on the natural ramming of air. (Photo Credit : GreyTrafalgar/Wikimedia Commons)

Now, regarding the construction of the two jet engines, the compressor of the regular jet engine at the front is replaced by a diffuser, while the other end of the engine is occupied by a propelling (convergent-divergent) nozzle.

Diffusers are devices used to reduce the velocity of a fluid (incoming air, in our case) and increase its pressure and temperature. Nozzles, on the other hand, are utilized to decrease the pressure and increase the velocity of a fluid (exhaust jet).  Since there is no compressor in ramjet and scramjet engines, the need for a turbine is also eliminated.

When air moving at hypersonic speeds is forced to pass through the diffuser, its dynamic pressure is converted into static pressure. The speed of the airflow decreases, while the pressure and temperature increase. This increased temperature and pressure aid in the combustion of the mixture.

The rest of the working procedure remains the same as in a regular jet engine. Inside the combustion chamber, the air is mixed with fuel and spark plugs help ignite the mixture, while the propelling nozzle accelerates the exhaust stream to generate thrust.

In a ramjet, the incoming air is slowed down to below subsonic levels by the diffuser. It makes use of oblique shock waves to slow the flow down, followed by a final normal shock wave to bring it below subsonic speeds. Since the amount of thrust generated depends on the speed of the exhaust jet, in ramjets, similar to jet engines, the amount of generated thrust is limited by the subsonic flow of air in the combustion chamber.

The propelling nozzle is also modified to accelerate the exhaust jet to higher Mach numbers. Thus, the thrust generated by scramjets is more than that of ramjets. Scramjets, therefore, can fly at greater speeds than ramjets. 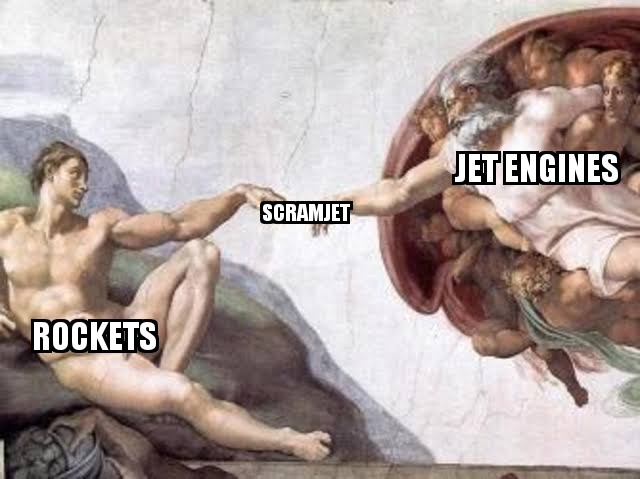 Scramjets are also important as they bridge the gap between highly efficient jet engines and high-speed rocket engines.

The use of scramjet technology might let us fly at speeds of more than 10 times the speed of sound, but it’s still very much a work in progress. As already mentioned, only 4 nations have been successful in developing scramjet technology. The very first scramjet engine-powered vehicle took flight in November of 1991 and was developed by Russia. It has been approximately 27 years since the first demonstration of scramjet technology, but it continues to elude us on a large scale.

The primary problem is the need for an additional launching vehicle to initiate the flight, as scramjets only produce useful thrust at speeds of Mach 5 or higher. The amount of heat generated by air friction and shock waves is another concern. A poor thrust-to-weight ratio limits acceleration, and the plane also needs to be considerably large to carry a certain payload. To top it all off, scramjet technology is extremely expensive to manufacture and test. Most tests end with the complete annihilation of the test vehicle.

So, while scramjet technology might seem exciting and useful, it’s something we won’t likely be seeing for at least another 10-15 years.