Turning a corner on a road is no big deal when you’re driving a car, but things change dramatically when you need to maneuver a downward (or upward) turn in a gigantic metallic tube – more specifically, in a submarine – operating underwater. So, what goes on inside a submarine when it dives and resurfaces?

A little Something About Submarines…

A submarine is a brilliant piece of technology specifically designed to operate underwater. It’s a special ship that has the ability to operate independently (i.e. without any external support) underwater. Initially manufactured for militaristic purposes (indeed, the biggest submarines currently in operation belong to navies from various countries), submarines these days are also used for carrying out research and experimentation underwater.

How does a submarine dive and resurface?

Before we discuss how submarines break the surface and go underwater, let’s do a quick recap of an important physical phenomenon of water that you surely studied at some point in a science class: buoyancy.

Buoyancy is basically an upward force that keeps everything from wooden planks to gigantic vessels from sinking. While messing with this force can have disastrous consequences, the ability to control it can be highly advantageous.

If the weight of water displaced by an object is equal to its own weight, then it floats; otherwise, it sinks. While most boats and vessels don’t dare to mess with this equilibrium, since it keeps them afloat, submarines manipulate this effect on purpose. In order to control the buoyant force acting on it, a submarine fills/empties itself with the surrounding water to dive/resurface. A submarine consists of ballast tanks (and trim tanks too, in some models) that can be filled by either water or air according to navigational requirements. 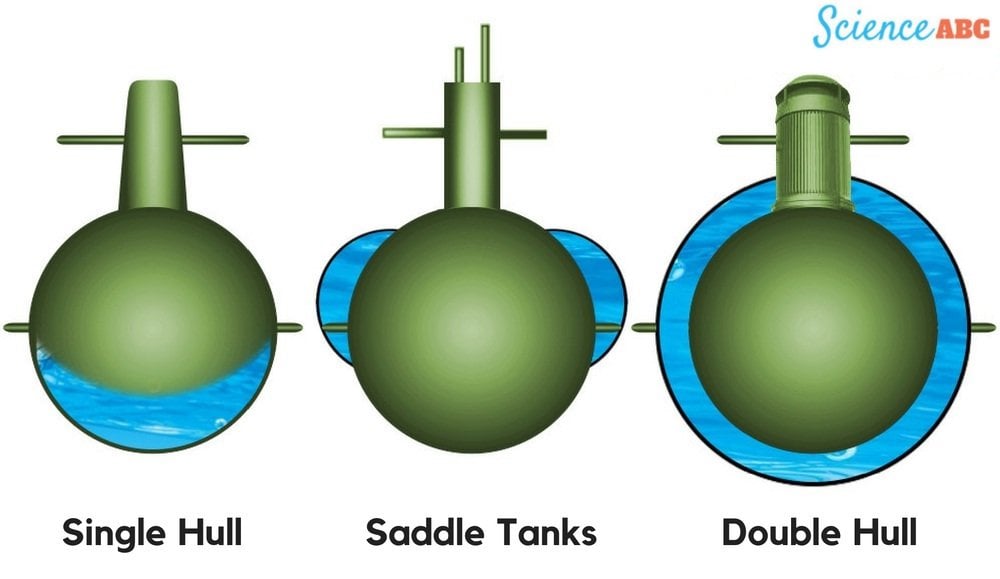 It works like this: when the submarine is above the surface of the water, the ballast tanks are filled with air, which means that the overall density of the submarine is less than the water it displaces. However, when the submarine needs to dive, it releases a vent in the ballast tanks that causes the surrounding water to rush in. The crew allows the surrounding water to fill the tank until the desired depth is reached, after which the valve is closed to stop any more water from rushing in.

In addition to the flooding of the tanks, two ‘diving planes’ also aid in controlling the speed of descent for the submarine. The angle of these ‘wings’ directly influences the speed of the dive.

On the other hand, when a submarine has to resurface, compressed air is blown into the ballast tanks from air flasks, which pushes the water out of the tanks at a rapid rate. This results in a decrease in the overall density of the submarine, causing it to rise to the surface. Furthermore, the hydroplanes are angled in such a way that water moves over the stern, pushing it down and making the submarine ascend faster.

Once you’ve acquired a cruising depth, you want to ensure that the submarine moves while staying submerged at the same depth without losing/gaining any further depth. To do this, the level of water and air present in the ballast tanks must be balanced. The tail rudder can be controlled to turn starboard/port (right/left), while the hydroplanes are used to control the fore-aft angle.

Submarines are a formidable piece of engineering, in that they not only operate under incredibly high-pressure conditions hundreds of meters underwater, but also keep nations’ maritime borders protected from intruders and facilitate scientific research beneath the waves.