Fishes survive underwater pressure as they do not breathe through lungs. Therefore, they do not have air pockets that can be compressed due to the high pressures. The beaked whale which can go as deep as 10,000 feet can completely compress their lungs so that all the air in it has been expelled.

Have you ever dove to the bottom of a swimming pool and gradually felt the pressure build up on your ears? Most people have a basic understanding of water pressure, which increases the deeper and deeper we go.

Human beings are usually not recommended to swim below 150 feet, but the deepest dive for a human being is actually 1,000 feet, which is rather incredible! At that depth, the pressure is intense, but that’s nothing compared to the pressure at deeper depths. It’s hard to believe that anything can survive without being crushed, and yet there are many fish and marine species that can survive at 25,000 feet below the surface!

How is that even possible? What keeps those deep-sea creatures from being crushed under the massive amount of weight?

Pressure Increases As We Descend Deeper Into The Ocean

When we are standing on the surface of the earth, the air pressure around us is 1 atm (atmosphere). When we go beneath the waves, however, the pressure on our body increases by 1 atm for every 10 meters we descend. In other words, at the deepest point in the ocean, slightly under 11,000 meters, the pressure you would feel on your body would be 1100 times greater than what you experience in the open air.

At the bottom of the ocean, the human body would be crushed under the extreme pressure (thousands of pounds of pressure per square inch), our eardrums would rupture, our lungs would fill with blood and then collapse, and suffocation would be instantaneous. In fact, this terrible series of events would happen only a couple thousand feet below the surface, let alone a few more miles down into the darkness.

Despite the vulnerability of human beings to the pressure at those depths, there are sea anemones, worms, fish, whales, seals, crabs, and thousands of other sea creatures that seem to handle the pressure without a second thought. While this seems impossible, remember that pressure is all about balance.

When human beings dive underwater, the pressure that we feel comes from the air in our bodies being compressed. We have air in our ears and sinuses, as well as our lungs and blood vessels. Water pressure can be intense, causing that air to compress within those organ systems and tissues.

How Do Fish Survive Pressure Under Water? 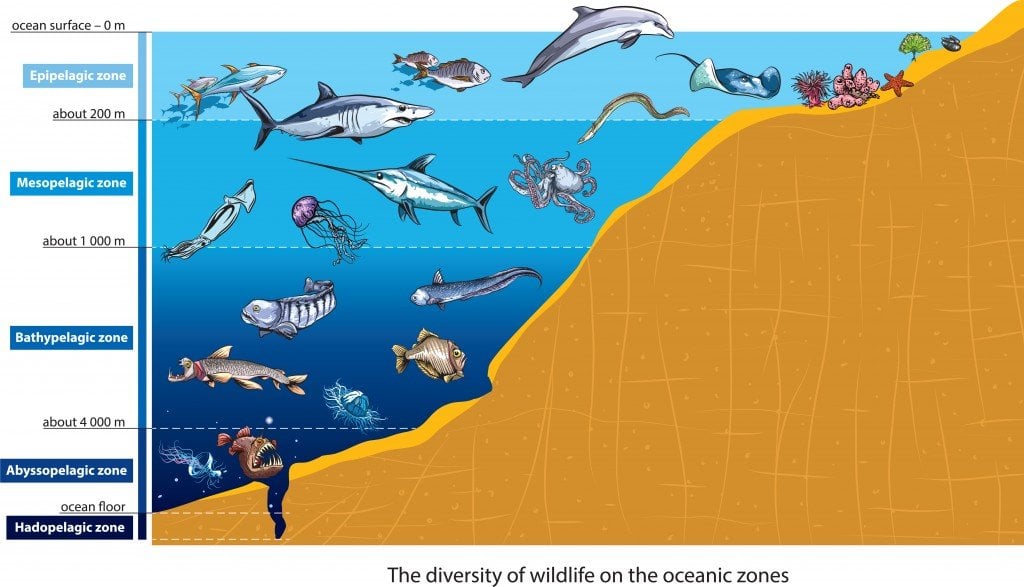 Water, however, is not compressible. This is one of the key differences between a gas and a liquid. Fish don’t have air pockets that can be compressed, especially since they don’t use lungs to breathe. They are composed largely of water, so the pressure differential remains balanced. The deepest-dwelling fish have been found at roughly 27,000 feet.

However, fish aren’t the only creatures found at such incredible depths. Some whales, seals, and other cetaceans are able to dive to depths of nearly 10,000 feet. These creatures do have lungs and vascular systems that are somewhat comparable to human beings, and yet they aren’t crushed into oblivion… how is that possible?

How Do Marine Mammals, like Whales, Survive Under Water Pressure?

For creatures like the beaked whale, which is arguably the deepest diving cetacean (just under 10,000 feet), pressure is definitely an issue, but they have a wide range of adaptations to accommodate their deep-sea lifestyle choices.

For example, the lungs of these creatures are completely compressible, meaning that they can force all of the gases in their lungs into their bloodstream and muscles, where it can essentially dissolve under the pressure. These organs have adapted to hold more myoglobin (oxygen-storing protein in muscles) and hemoglobin.

This collapse of the lungs also prevents gas exchange at the alveoli, thus preventing nitrogen from entering the bloodstream, which would result in the infamous “bends” that human deep-sea divers can experience if they rise from great depths too quickly.

Essentially, one experiences “the bends” when dissolved gases emerge from solution as bubbles in the bloodstream, which can be damaging or even deadly. Many deep-sea diving creatures (like whales) have naturally learned how to rise slowly through the water, decompressing just as humans do to prevent this painful condition.

Without those air pockets in their body cavities and tissues, deep-sea creatures are no longer susceptible to the same pressure that our bodies feel. Furthermore, while some creatures do have air in their ear canals (and some even have sinuses in their head cavity), the tissues lining these cavities are often highly flexible, and can readily expand, thus forcing out any air and preventing the pressure differential.

Is There A Limit To How Deep Deep-Sea Creatures Can Live?

Below a certain depth, advanced creatures with complex organ systems (those other than anemones, worms, and certain arthropods) simply cannot survive. What allows fish to dive to depths of over 25,000 feet is the presence of a particularly hydrophilic substance called trimethylamine oxide (TMAO), which prevents the distortion and compression of proteins and other vital molecules within the body under intense external pressure.

However, at even more extreme depths, that molecule can no longer protect fish from that fundamental physiological compression, so there IS a depth limit for fish and marine creatures. For those bizarre creatures that do exist at the very bottom of the ocean, study is very difficult, as most will die due to a LACK of pressure when they are brought to the surface. Their membranes are so uniquely adapted that they cannot maintain their integrity under anything but extreme pressures.

In other words, certain mysteries of the deep are likely to stay that way.

Do you remember why deep-sea fishes do not get crushed by oceanic pressure?